Dynamic One, the “other” horse trained by Todd Pletcher, lived up to his name with a one-length victory over a closing Proxy in Saturday’s third running of the $198,750 Blame Stakes (Listed) at Churchill Downs, a local prep for the Louisville racetrack’s $750,000 Stephen Foster (Grade II) on Saturday, July 2. Scalding was a neck back of the runner-up in third and Pletcher’s Grade I winner Americanrevolution, the even-money favorite, was fourth.

Longshots Super Stock and Santos Dumont took turns leading the way early on through splits of :23.61, :47.42 and 1:11.73 as Dynamic One had one horse beat all the way into the final turn.

Americanrevolution, who was making his first start since winning the Grade I Cigar Mile in December, drew even with the tiring leaders at the top of the stretch as stablemate Dynamic One tipped out for a wide rally. Dynamic One gained the advantage into the final furlong and inched clear soon thereafter for the win.

“I had a pretty good idea of his running style and let him settle off of the early pace,” Gaffalione said. “He took the kickback really well and had a powerful kick down the lane. It set up perfectly for him and he came rolling late.”

At age 3, Dynamic One qualified to the 2021 Kentucky Derby with a narrow runner-up finish to stablemate Bourbonic in last year’s Wood Memorial. He’d return in the summer to win the restricted Curlin Stakes at Saratoga.

Prior to the Blame, Dynamic One finished second to Scalding in the $300,000 Ben Ali (GIII) at Keeneland on April 23.

After Americanrevolution, it was Santos Dumont, Super Stock and Militarist to complete the order of finish. Title Ready was scratched.

Dynamic One is a 4-year-old Kentucky-bred son of Union Rags out of the Smart Strike mare Beat the Drums. He was bred by his co-owners, the Phipps Stable.

The Blame is named after the 2010 Eclipse Award-winning older horse that handed Zenyatta her lone defeat in that year’s Breeders’ Cup Classic (GI) at Churchill Downs.

The July 2 Stephen Foster is a “Win and You’re In” event for the Breeders’ Cup Classic (GI) at Keeneland Race Course on Nov. 5.

“He ran a heck of a race this afternoon,” said Pletcher’s assistant trainer Stu Hampson. “I thought the pace would set up pretty well for his running style coming from off of it. He’s a really nice colt and has kept showing improvement this year after coming back as a 4-year-old. We’ll leave it up to Todd and the team to see if we stay here for the Stephen Foster but we can’t be more pleased with his race today.” 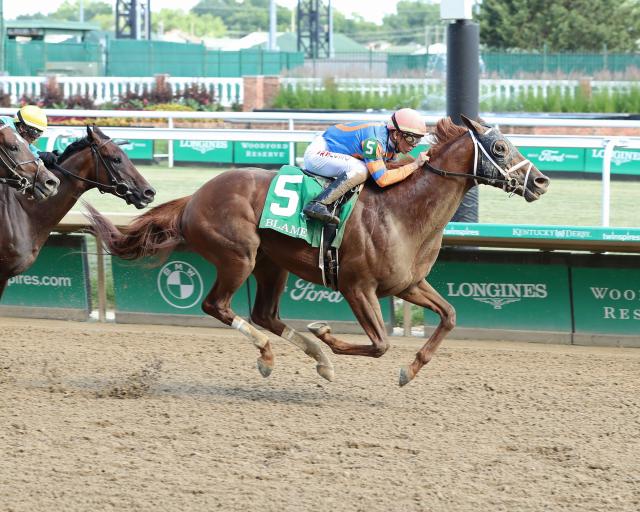