Sent to post as the 2-5 favorite in a field of seven 2-year-olds, Stonestreet Stables’ homebred Cazadero tracked pacesetter County Final, who blitzed his way to the front through swift fractions of a :21.24 and :45.12. Off the turn, jockey Ricardo Santana Jr. shook the reins on Cazadero, who quickly drew even with the leader at the three-sixteenths pole and asserted himself in deep stretch for the comfortable victory.

“He is an incredibly nice horse,” Santana said. “We sat in a really good spot today and was very comfortable. He kept finding his stride throughout the stretch.”

“He’s been a very fast horse in his training and handled everything very well today,” Asmussen said.

Cazadero’s triumph was worth $60,760 and increased his bankroll to $106,160 with a perfect record in two starts. His debut win came May 29 at Churchill Downs in a five-furlong maiden special weight.

Cazadero is a 2-year-old son of 2007 Kentucky Derby winner Street Sense out of the Forest Wildcat mare Wild Gams. He was bred in Kentucky by his owner Barbara Banke of Stonestreet Thoroughbred Holdings LLC.

Hulen, Hyperfocus, Gatsby and Crown and Coke completed the order of finish.

Ricardo Santana Jr., jockey of CAZADERO (winner): “He is an incredibly nice horse. We sat in a really good spot today and was very comfortable. He kept finding his stride throughout the stretch.”

Steve Asmussen, trainer of CAZADERO (winner): “He’s been a very fast horse in his training and handled everything very well today.”

Barbara Banke, owner of CAZADERO (winner): “He was a later foal but we knew he was wickedly fast. He grew up on our farm and has showed that speed in his two starts.” 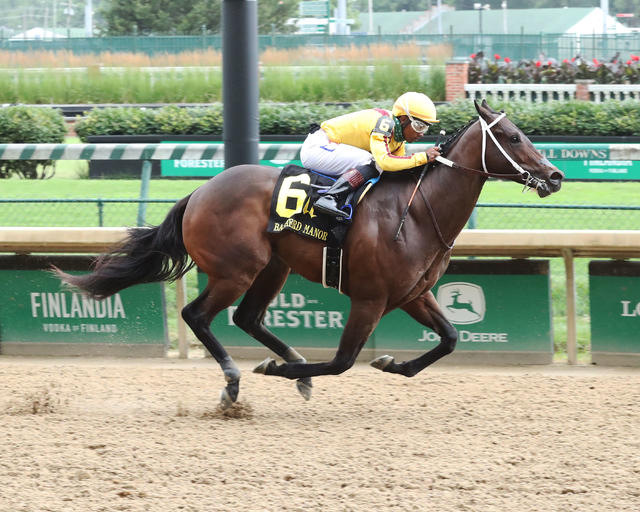