With the 2020 Breeders’ Cup World Championships one week away, 27 local contenders logged their final breezes prior to shipping to Keeneland for the season-ending event that runs Friday and Saturday.

Below is the full list of Breeders’ Cup horses that worked on Saturday at Churchill Downs:

It was another busy morning for Brad Cox’s barn as he worked six of nine contenders including $2 million Distaff (GI) likely favorite Monomoy Girl.

“I hate to sound cliché but it was another awesome morning for all of these horses,” Cox added. “Most of the serious preparation was done last week but these works still matter to make sure each horse is in top shape prior to the event.”

Jockey Florent Geroux was aboard Monomoy Girl for her final breeze prior to the Breeders’ Cup as she worked alongside $1 million Dirt Mile (GI) contender Owendale. Monomoy Girl was one of six horses Geroux breezed Saturday at Churchill Downs.

“She’s a champion mare and really a horse of a lifetime,” Geroux said. “She’s a future Hall of Famer with her résumé. The speed figures show she is a little bit faster this year than her 3-year-old year.”

The only remaining Breeders’ Cup contenders to work at Churchill Downs are Just Might and Manny Wah. Both will work on Sunday, according to their respective trainers.

“(By My Standards and Mr. Money) both worked awesome this morning,” Saez said. “By My Standards was supposed to be in about 1:01 but I couldn’t slow him down. He’s just doing really, really good. Mr. Money got over the ground great again, too.”

By My Standards was one of four Classic contenders to work on Saturday. Another was Sagamore Farm and WinStar Farm’s $500,000 Woodward (GI) winner Global Campaign. Trained by Stan Hough, Global Campaign returned from a nine-month freshening in April at Gulfstream Park and sports a 3-for-4 record in 2020.

“In the Fountain of Youth he really tore his quarter as bad as I’ve seen it,” Hough said. “That set up for a series of foot problems after that. He’s very talented and I think we’re getting to a place where he can really show it.”

“We are ready to go for the big money,” trainer Dallas Stewart said of Title Ready. “He’s a longshot but he will be coming with his run. We’ll see what happens but we’ll be ready.”

Star 3-year-old filly Swiss Skydiver was one of three Kenny McPeek trainees to work Saturday morning. Jockey Robby Albardo was once again aboard for the work on the Preakness (GI) winner. She pre-entered both the Distaff and Classic and McPeek is leaning to the Distaff barring any major defections in the Classic.

Entries for all 14 Breeders’ Cup races will take place on Monday. There are 43 horses from Churchill Downs expected to be entered. All horses are required to be on the grounds Wednesday. Many local contenders are set to arrive on Monday including Cox’s nine-horse squad.

TV SCHEDULE – Racing at Churchill Downs continues every Wednesday-Sunday through Nov. 29 (except Nov. 6-7) with daily first post at 1 p.m. ET. Below is the upcoming TV schedule on the Fox Sports and MSG family of networks:

DOWN THE STRETCH – There was a $57,697 carryover in the 20-cent Single 6 Jackpot for racing on Saturday at Churchill Downs. First post was 1 p.m. … Next week, racing at Churchill Downs will take place Wednesday, Thursday and Sunday. Racing on Friday and Saturday will move to Keeneland for the Breeders’ Cup. For more information and to purchase tickets for the Fall Meet, visit www.churchilldowns.com. 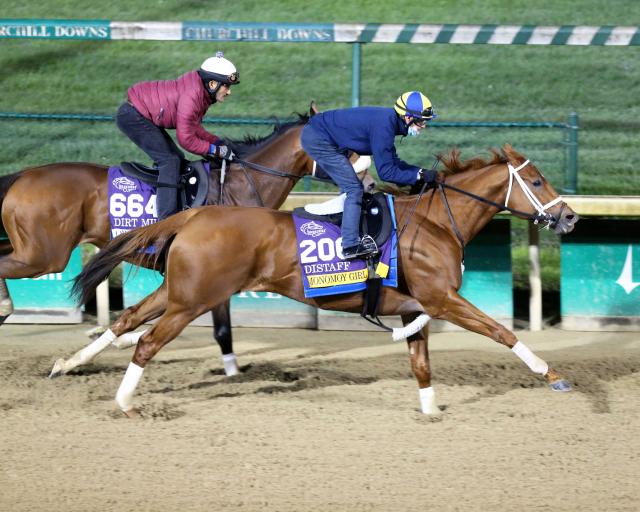