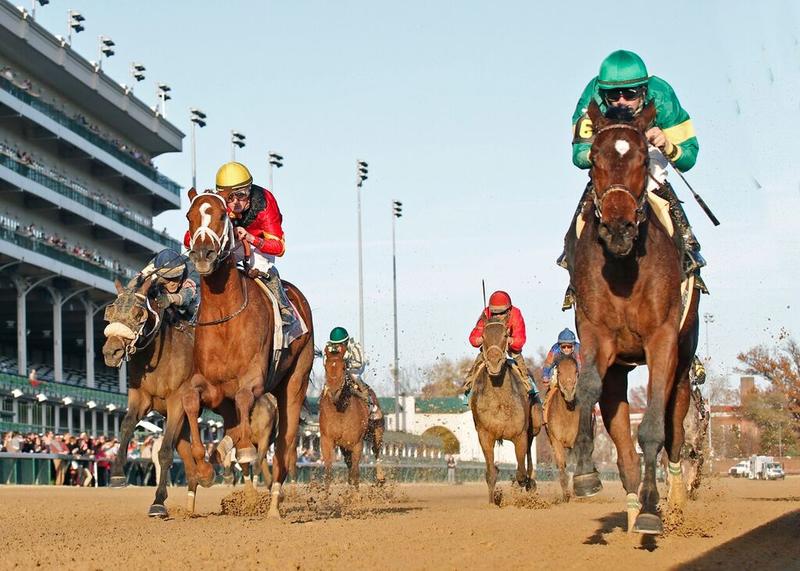 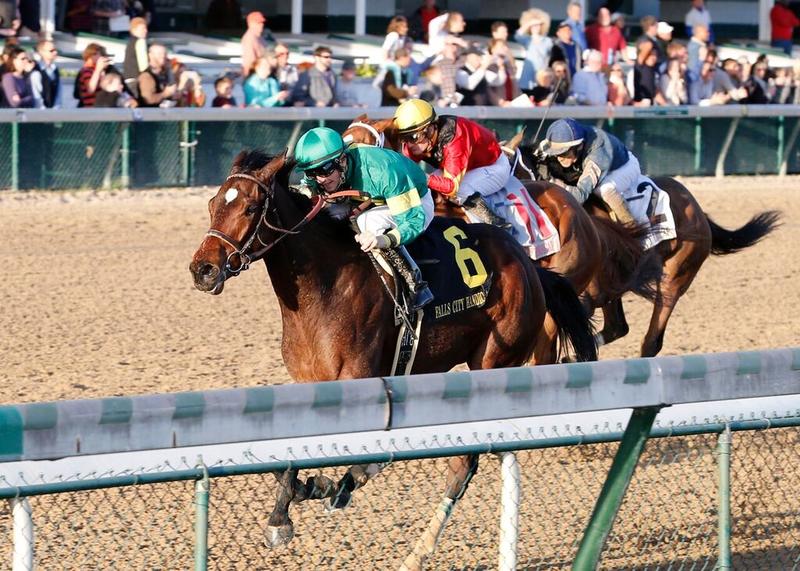 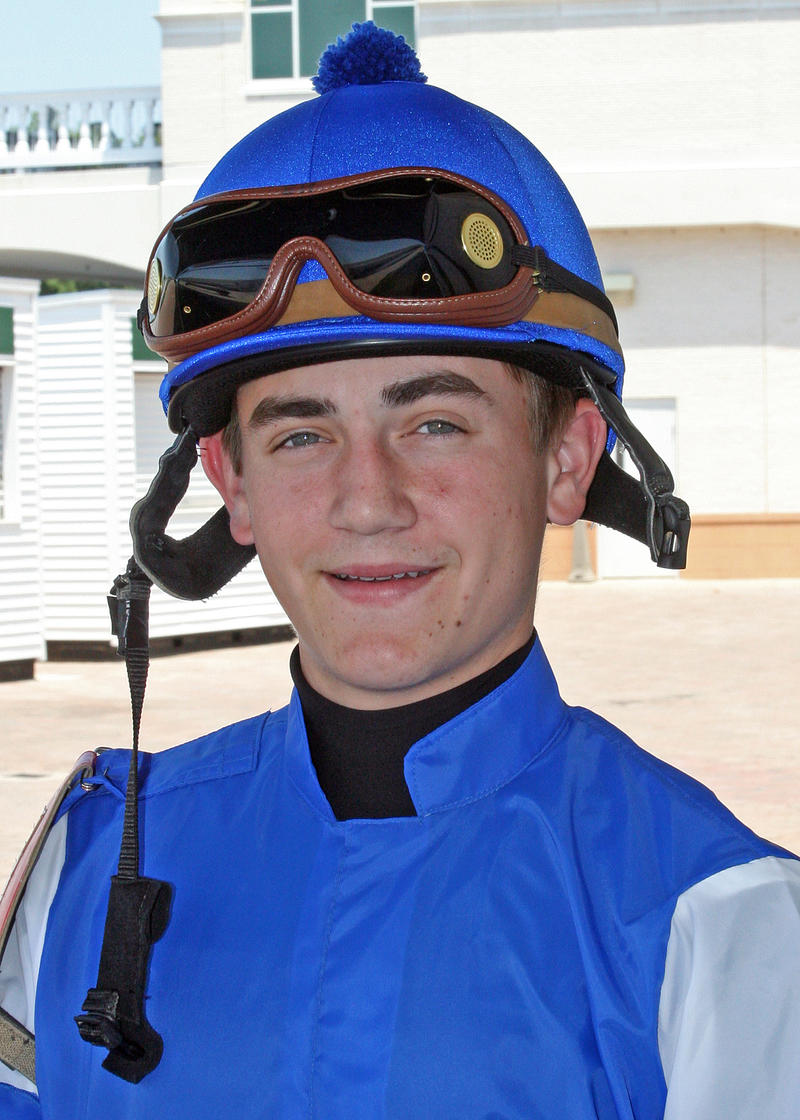 Stoneway Farm’s homebred 3-year-old filly Ahh Chocolate rated patiently in second before taking command in the stretch and drew away to win the 100th running of the $200,000 Falls City Handicap Presented by TwinSpires.com (Grade II) on Thanksgiving Day at Churchill Downs by 1 ½ lengths over Theogony.

Ahh Chocolate, trained by Neil Howard and ridden by Brian Hernandez Jr., ran 1 1/8 miles over a fast track in 1:49.68 – the fastest Falls City renewal since Allamerican Bertie clocked 1:49.60 in 2002. It was the first graded stakes win of Ahh Chocolate’s career.

“She’s been a nice filly,” said Howard, who won the 1998 Falls City Handicap with Tomisue’s Delight. “She may have not won every time but she’s always given us 100 percent. … We’ve always thought highly of her and … she’s going to be a lot better with age.”

Ahh Chocolate, a runner-up in the Grade II Chilukki on Nov. 1, and Theogony tracked pacesetter Gambles Rose, who led the field of nine fillies and mares through early fractions of :24.12, :48.31 and 1:12.77. Hernandez moved Ahh Chocolate wide on the final turn, took the lead at the head of the lane and never looked back as the runner-up chased the winner.

“We got a great spot around the backside and from there we were on the best horse,” Hernandez said.

Third in the Black-Eyed Susan (GII) on the day before the Preakness at Pimlico, Ahh Chocolate was subsequently fourth in the Indiana Oaks (GII) and 10th in the Arlington Park’s Pucker Up (GIII) on turf. Howard gave the filly a brief freshening and she returned in September with a trio of one-turn races, including a 4 ½-length defeat but runner-up effort in the Chilukki.

“She always looked like she was going to get the two turns but Neil did the right thing by going back to a one-turn mile last time,” Hernandez said. “It sharpened her up for this race today.”

Ahh Chocolate, who carried 115 pounds during the victory, is a Kentucky-bred 3-year-old daughter of Candy Rode (ARG) out of the Saint Liam mare Ahh. The victory was worth $119,040 to her owner/breeder Jim Stone and brought Ahh Chocolate’s career earnings to $119,040 from four wins, one second and one third in nine career starts.

Birdatthewire, the 2-1 favorite and 118-pound starting high weight, was another three lengths back in fourth and was followed by Pretty Fancy, No Fault of Mine, Salama, Gamblers Rose and Montana Native.

The race was marred by a fatal fracture to 3-year-old filly Chide’s left front leg just before the field hit the top of the stretch. Her jockey Miguel Mena was unseated but was reported to be “okay” and returned to the jockey’s room.

The Falls City is the traditional main dish on the Thanksgiving Day menu at Churchill Downs – a Louisville tradition since 1969 where more than 7,000 turkey dinners are served with all the trimmings, making it the largest number anywhere in the region.

This year’s holiday program also included the 38th running of the $100,000 River City Handicap (GIII), a 1 1/8-mile test for older horses over the Matt Winn Turf Course, which was won by Terry Hamilton’s Heart to Heart.

NEIL HOWARD, trainer of AHH CHOCOLATE (winner): “She’s been a nice filly; you can ask Brian [Hernandez Jr.]. As far as he’s concerned, she may have not won every time but she’s always given us 100 percent and going off the premise of what Brian has been telling me all season long. We’ve always thought highly of her and are thinking that she’s going to be a lot better with age and as she gets older. We’ll target the Fair Grounds races in the winter, but we’re going to give her a little bit of a break right now.”

BRAIN HERNANDEZ JR. jockey of AHH CHOCOLATE (winner): “She ran big. We got a great spot around the backside and from there we were on the best horse. She had a couple of tough races going two turns. She wasn’t the quickest filly going away from there and, like in the Black Eyed Susan, we stuck down in behind horses and they went slow in front of us and instead of us being able to get in stride, we were stuck getting in a tug and war with her. Today, I was able to get outside and she turned off out there but she got in a nice rhythm and finished it off for us. She always looked like she was going to get the two turns but Neil [Howard] did the right thing by going back to a one-turn mile last time. It sharpened her up for this race today.”

NORMAN CASSE, assistant to MARK CASSE, trainer of THEOGONY (runner-up): “I thought Julien rode her perfectly. I really had my reservations as it was her first start on dirt, but we knew she had been training well on it and we look forward to seeing her running on it again.”

Q: Your father has said that horses like this one that move from the synthetic Polytack at Woodbine tend to run well at Churchill Downs. Was that part of your stable’s thinking in running in the Falls City? “She had always trained well on the dirt, but circumstances never allowed us to do it. This was a perfect opportunity. We got her down here a few weeks early and she had really worked well. Her next start will be a better indicator of how good she is on dirt.”

JULIEN LEPAROUX, jockey on THEOGEONY (runner-up): “She ran good. It was her first time on the dirt and that was a question mark, you know? She put me in the race nice and easy and relaxed, and she kept on going at the end. She just got beat by a better filly, but she ran a big race. She had a very good trip – she was just second best.”

BRAD COX, trainer of CALL PAT (third): “She ran great. I was real pleased with it.She probably was up against it with the lack of pace in there, but she ran her race. The filly that won it had a great stalking trip and the filly that was second was right outside of her. She ran a great race. I was very proud of her.”

JOE ROCCO JR., jockey on CALL PAT (third): “Call Pat ran great. She did her thing. She could always use more pace. When they go slower up front it’s detrimental to her. She settled and she came running. She’s an honest mare – she always tries.”

DALE ROMANS, trainer of BIRDATTHEWIRE (fourth): “I think ‘Bird’ is working her way back where she needs to be. We’ll get her down to Gulfstream – I know she likes that racetrack and she’s had some good races down there. Finishing fourth in this race is nothing to be ashamed of. She’s doing very well.” 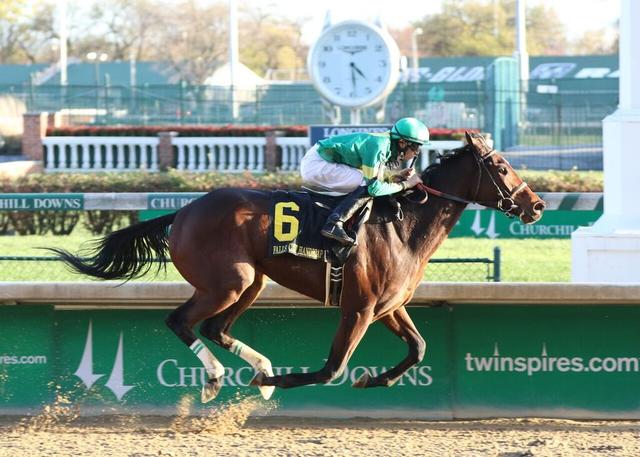