Alkhaatam, a striking gray colt by Tapit, worked in company with unraced $750,000 yearling purchase Mustatheef at 5:45 a.m. (all times Eastern) through swift opening fractions of :23.20 and :46.80 before galloping out six furlongs in 1:13.80. Jockey Channing Hill was aboard Alkhaatam while Declan Cannon rode Mustatheef.

“When we were originally deciding on where to run next, I told the owners that we would eventually end up in a stakes someday,” said trainer Danny Peitz, a native of Little Rock, Ark. “I thought why not give the Stephen Foster a try. It’s in our backyard at Churchill and worth $600,000. Plus, it’s a ‘Win and You’re In’ race for the Breeders’ Cup. If we can get lucky enough to jump up and win this thing, we would be set for the rest of the year being in the Classic.”

Alkhaatam is perfect in two starts this year with a 7 ¼-length maiden-breaking score on March 29 at Oaklawn Park and a 3 ¼-length victory on May 12 in a first-level allowance race beneath the Twin Spires.

“(Alkhaatam) was originally with Chad Brown in New York,” Peitz continued. “We got him this winter and he’s really turned the corner. He’s still figuring some things out but he can sure run a bit.”

Two hours later, Thirstforlife worked five furlongs in 1:00.20 with Miguel Mena aboard. The seven-time winner is in search of his first stakes victory.

“His race on Derby Day really impressed me,” Hawley said. “That was a pretty solid field he beat with American Anthem and King Zachary finishing behind him. The Foster is the most likely spot to run him after that effort.”

Hawley claimed Thirstforlife for $50,000 in October 2017, and has since recorded four victories and three runner-up efforts.

Longines Kentucky Oaks (GI) winner Serengeti Empress put in her final work before next Saturday’s Acorn (GI) at Belmont Park with a strong half-mile breeze in :47.80 for trainer Tom Amoss.

Multiple Grade I-winner Elate worked five furlongs in 1:03.40 for Hall of Fame trainer Bill Mott, who was onsite at Churchill Downs Saturday. The classy mare could run in the $250,000 Fleur de Lis Presented by Budweiser (GII) at Churchill Downs on June 15.

TwinSpires.com Louisiana Derby (Grade II) winner By My Standards had his first published workout since finishing 11th in the Kentucky Derby Presented by Woodford Reserve (GI). The colt worked a solid half-mile in :47.60. Trainer Bret Calhoun expects the son of Goldencents to return to the races early this summer.

Miss Preakness Stakes (GIII) hero Covfefe, who demolished the Pimlico six-furlong track record with a final time of 1:07.70, returned to the work tab with an easy half-mile move in :51.20 for trainer Brad Cox. Also working just after Cofvefe was Preakness Stakes (GI) third-place finisher Owendale, who breezed a maintenance half-mile in :50.60. The three-time winner could run in the Ohio Derby (GIII) on June 22. Cox closed his set by breezing Preakness fourth-place finisher Warrior’s Charge a half-mile in :50.40.

Along with Cox’s trio of Covfefe, Owendale and Warrior’s Charge, the Louisville-native also breezed Eight Belles (GII) winner Break Even a half-mile in :50 for the June 9 Jersey Girl Stakes at Belmont Park; Oaklawn Mile runner-up Exclamation Point through a half-mile in :48.40 for a possible start in the Stephen Foster; and Allaire DuPonte Distaff Stakes (GIII) winner Mylady Curlin worked an easy half-mile in :51.20.

DOWN THE STRETCH – Kentucky Derby winner Country House galloped Saturday morning at Churchill Downs for the first time since his victory. The colt, who was ridden by regular rider Marianne Scherer, galloped about one-mile at 6:45 a.m. under the watchful eye of trainer Bill Mott and assistant Kenny McCarthy. Mott was scheduled to return to New York on Saturday morning. … There is a $22,670 carryover in the 20-cent Single 6 Jackpot on Saturday. The sequence will span Races 6-11 for the Downs After Dark Presented by Budweiser program. Saturday night’s theme is a celebration of Woodstock’s 50th anniversary with “Peace, Love & Horse Racing” and guests are encouraged to wear tie-dye. Entertainment will feature Chicago-based jam band Mr. Blotto with original and classic 60s tunes, local DJ Matt Anthony, a retro fashion contest and more. Churchill Downs admission gates will open Saturday at 5 p.m. … The racing week will close Sunday with a first post of 12:45 p.m. for the 10-race card. 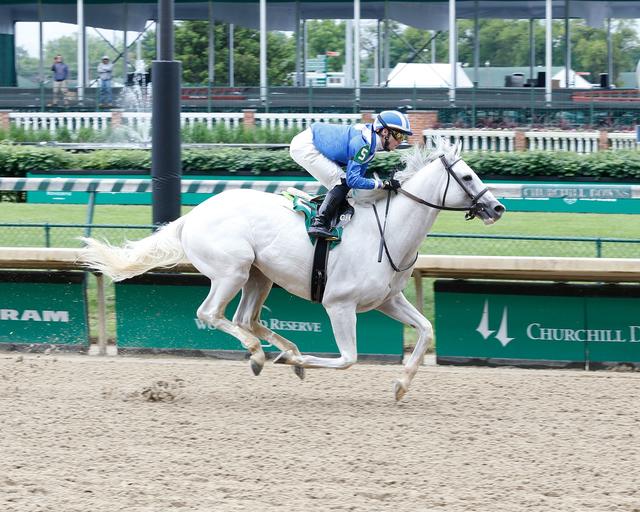