An Excellent Morning After for Oaks Heroine Malathaat

That was trainer Todd Pletcher’s all-encompassing answer to the question of Malathaat’s condition on the morning after her gutsy run and neck victory in the Grade I Longines Kentucky Oaks Saturday at Churchill Downs.

With a national television audience taking it in, the well-made daughter of Curlin overcame early troubles, took rider John Velazquez’s cues at all points and then dug down deep to win a photo finish and $713,000 in the 147th “Run for the Lilies.”

The Shadwell Stable miss now is a perfect five for five in her brief racing career, has three graded stakes on her ledger and is well on her way to millionaire status ($953,000) with a very bright future ahead.

The conditioner wasn’t sure yet what the shipping plans were for his star 3-year-old miss. He said the outcome of events Saturday (read Kentucky Derby) for his four star colts would play a big factor into who, where and when would be on the road from his potent string.

“You’d like to think with a filly like (Malathaat) you can be thinking Breeders’ Cup (at Del Mar in November),” Pletcher said. “But we’ve got a long way to go before we get there.”

SEARCH RESULTS – Trainer Chad Brown said Klaravich Stables’ Search Results was a tired filly Sunday morning but was none the worse for wear after a heartbreaking and ultra-game second by a neck in the Oaks.

“We checked her out this morning and she looks fine,” Brown said. “She came back good and will ride back to New York on Monday. Right now, we’ll look at the (Grade I) Acorn and Coaching Club American Oaks; those are the two most likely things we’ll discuss,” Brown said.

Search Results saw her unbeaten streak end at three but lost nothing in defeat while battling the undefeated Malathaat through the stretch. The daughter of Flatter tracked early leader and second-choice Travel Column 3-wide throughout under Irad Ortiz Jr., made first run off the far turn, and refused to yield to the winner.

“It was a huge race,” Brown said. “I watched the replay a couple of times and I thought Irad used good judgement. It was just the way it unfolded, she was parked out a little bit, and I would have preferred that we were right next to Travel Column and saved a little bit more ground on both turns it may have helped reserve a little bit of fuel. That said, the winner broke a little tardy and had to be used and was pitched out following me just as wide, so she won obviously fair and square.”

Brown was also quick to applaud Hall of Fame jockey John Velazquez, who gave the winner a flawless ride, while showing a little gamesmanship as well.

“It was typical Johnny fashion,” Brown said. “He rode so smart to follow us, then floated us down to the inside, which is his patented move. It was a smart move. And it was a winning move. She just had a little more and she’s a really good horse.”

Sitting back in his office chair in Barn 25, Brown looked back on the last 10-12 days and summarized the proceedings, while admitting the end result might have been right in front of everyone all along.

“At the end of the day, as I’ve learned with the Oaks and the Derby, there’s a big buildup and these are fun races to analyze,” Brown said. “Then you throw into the mix that this is one of the only events where the media is actually watching these horses train every day. And there’s a lot of different scenarios and projected paces and trips and opinions, and it’s great. But at the end of the day, a lot of times in these big races, when you look at them the next day, it wasn’t too hard to figure out; the two undefeated fillies threw down in the lane and that was the way it was probably the way it was supposed to be.”

As for the prospect of facing Malathaat again, Brown took a bit more stoic approach, while noting both fillies might go down a different path this summer, with Saratoga’s 1 1/8-mile Coaching Club and 1 ¼-mile Alabama on the calendar.

“I think I’d be foolish to say I’m looking forward to running against her,” Brown joked. “I don’t know if you ever want to run against great horses, especially if you have one of your own. I read this stuff sometimes, and I’m not one of these bravado guys that say ‘I’m looking forward to a rematch.’ I appreciate the sport, and I look forward to the challenges, but I’ve got a really good horse and there are races out there for all of us. And looking at Malathaat and the schedule going forward, it looks like she won’t have any trouble beyond this (distance), like in the Alabama. I don’t really see that in our filly’s future. Coming in, we thought 1 1/8 miles was fine for our filly, and if you take the winner out, she was well clear of the others. But I don’t know if Search Results will relish a mile and a quarter, so they might separate at that point. The mile and an eighth races though, I wouldn’t hesitate to run her in any race I saw fit, regardless of who was running, and I say that with the utmost respect to the others.”

Stewart reported that he and owner Willis Horton will look for additional races down the road for the 3-year-old filly.

CLAIRIERE/PAULINE’S PEARL – Both of Stonestreet Stables’ homebreds Clairiere and Pauline’s Pearl, who were fourth and eighth, respectively, came out of the Oaks in good order and will be given a brief freshening, according to trainer Steve Asmussen’s assistant Scott Blasi.

Travel Column dueled on the lead until fading in mid-stretch while Coach ran an enigmatic ninth.

“(Travel Column) relaxed well on the front end but just didn’t have that final push to continue on. I’m still not sure what ended up happening with Coach but we’ll regroup and look for more options down the road.”

MILLEFEUILLE – Trainer Bill Mott said that Juddmonte’s Millefeuille was fine Saturday morning, a day after finishing sixth in the Oaks after a wide trip all the way through the 1 1/8-mile test.

“There will be a race for her,” Mott said. “The first two (Malathaat and Search Results) were clearly the best yesterday. She may be able to compete with those with a good trip.”

The day was not a total loss for the Mott barn as Obligatory, who served as Millefeuille’s workmate prior to the Oaks, won the Eight Belles (GII) with a last-to-first run. “We thought Obligatory is as good as the other one.”

MARACUJA – Beach Haven Thoroughbreds’ Maracuja exited her seventh-place finish in the Oaks in good order and will eye a couple of Saratoga grade 1 races later this summer, according to trainer Rob Atras.

“She cooled out really good and last night she was good and relaxed when we left and ate up as well,” Atras said. “We’ll go back to Belmont and regroup a little bit. We’d like to look at races like the Coaching Club American Oaks and Alabama at Saratoga.”

Maracuja was Atras’ first starter in the Oaks, and while she may have been 37-1 on the toteboard, the daughter of Honor Code acquitted herself nicely in what was her first start away from Aqueduct.

“She ran well, I can’t knock her at all,” Atras said. “We were happy to be here but we also wanted to run well, and I think she did that. She broke a little slow and that cost her some tactical position. I really think, in the Oaks and Derby, having watched them, you need to have a horse with tactical speed and she doesn’t quite have that like those top fillies. But she’s still learning and developing and I really think she’s got a bright future.”

"She’ll be fine. It won’t have any impact on her,” said Greg Geier, assistant to trainer Kenny McPeek. The team will regroup and figure out where the filly and King Fury, a scratch Friday from the Derby after he spiked a temperature, race next.

MORAZ – The dark daughter of Empire Maker reported back to Barn 37 late Saturday afternoon none the worse for wear following her front-running, but unplaced finish in the $1.25 million Kentucky Oaks at Churchill Downs. The filly lay second for nearly a mile in the mile and one-eighth Grade I headliner, but couldn’t sustain her bid under rider Flavien Prat.

“She came out of it well,” reported assistant trainer Justin Curran. “She ate up last night and is feeling fine this morning.”

“She’ll go back to (Southern) California (McCarthy’s base) at some point but I’m not quite sure when,” Curran said.

PASS THE CHAMPAGNE – Pass the Champagne emerged from her 12th-place finish in the Kentucky Oaks in good order and was being hand walked around the barn Saturday morning by her trainer George Weaver.

“She’s good,” Weaver said. “We’ll get her home and make next race plans from there.”

COMPETITIVE SPEED – John Minchello’s Competitive Speed is scheduled to return to her home base at Gulfstream Park on Sunday after exiting the Oaks in good order for trainer Javier Gonzalez.

No specific race has been targeted for a return to the races according to Gonzalez.

“The result was not what I wanted but it was a good experience,” Gonzalez said. “I always learn, so let’s see what happens next time.” 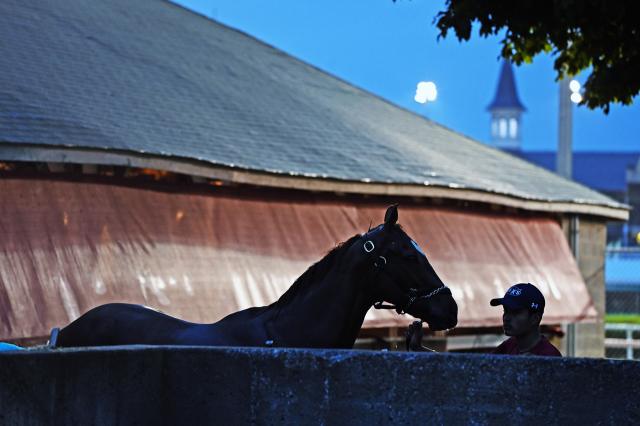