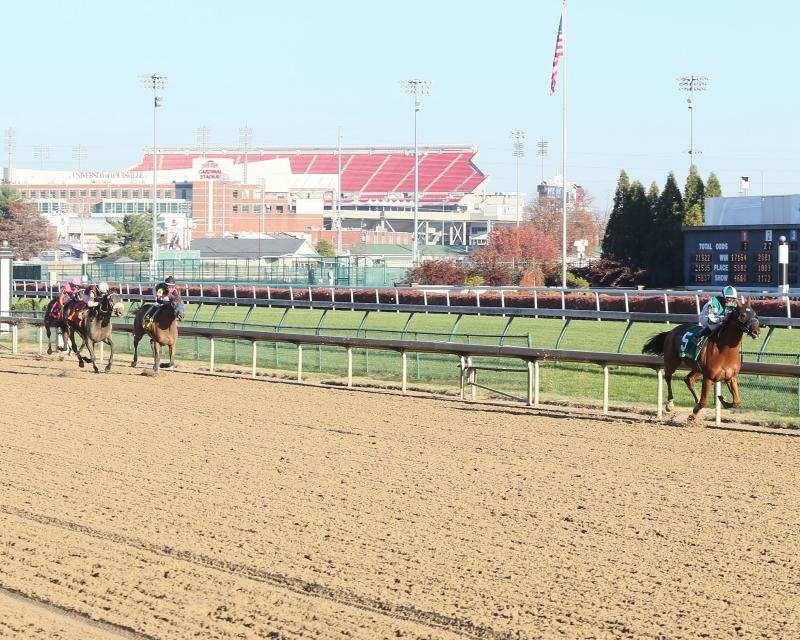 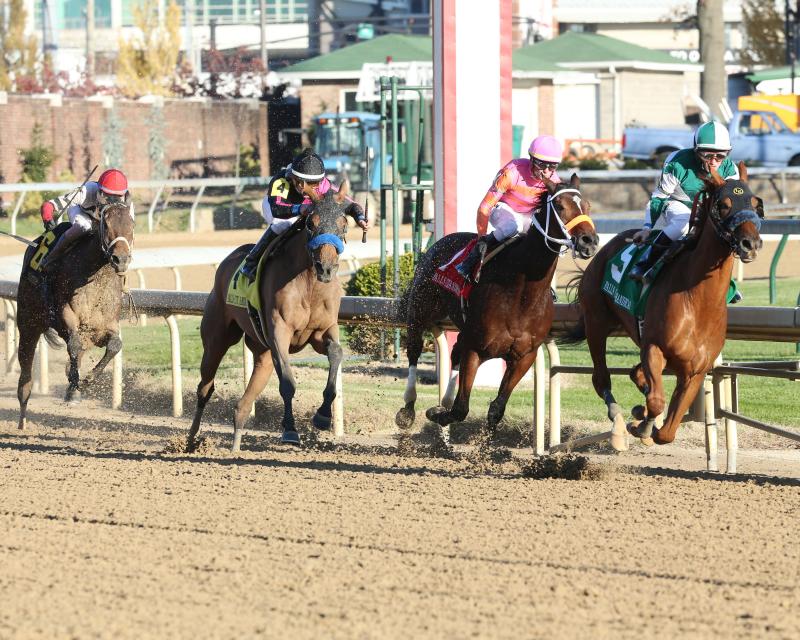 Merriebelle Stable LLC’s Blue Prize (Arg) (right) surged to the lead on the far turn on her way to a commanding 8 1/2-length victory in the $200,000-guaranteed Falls City Handicap (GII) on Thanksgiving Day at Churchill Downs. (Coady Photography, Churchill Downs) 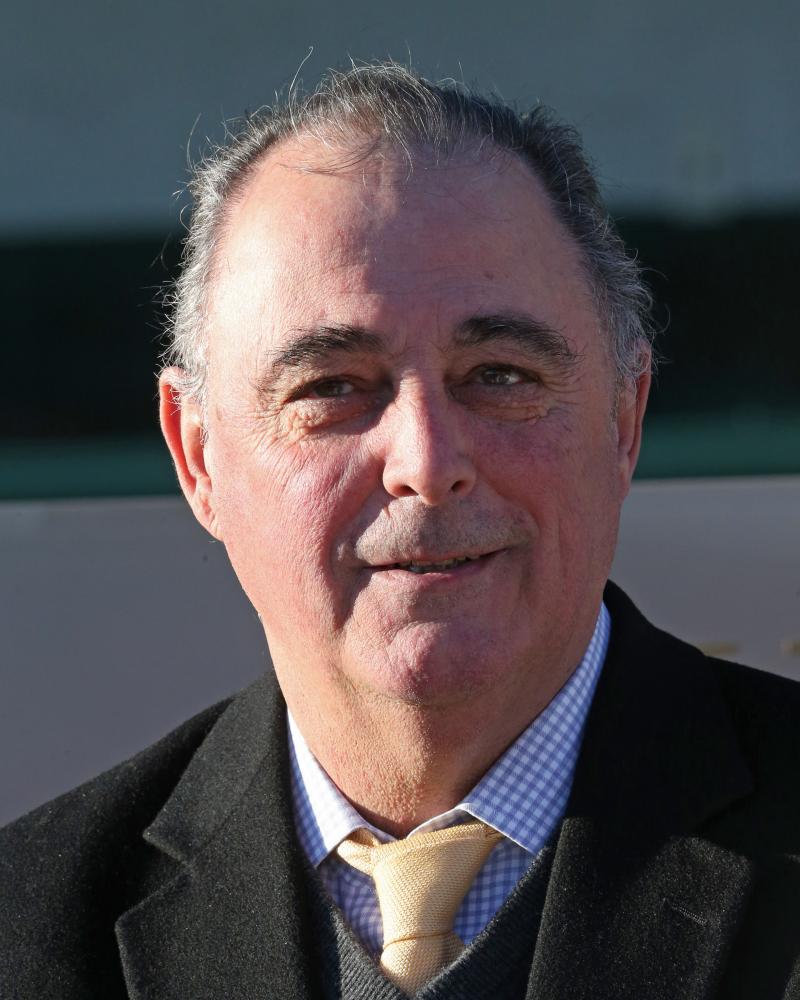 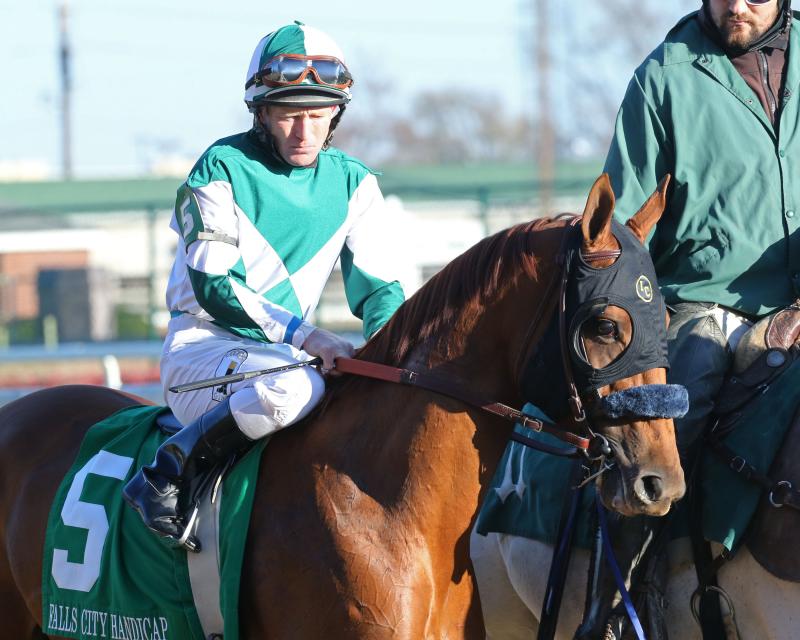 Merriebelle Stable LLC’s 4-year-old filly Blue Prize (Arg) took the lead from pacesetter Money’soncharlotte on the far and drew off in the stretch for a decisive 8 ½-length triumph over Tiger Moth in the 102nd running of the $200,000 Falls City Handicap (Grade II) for fillies and mares on Thanksgiving Day at Churchill Downs.

Blue Prize, trained by Ignacio “Nacho” Correas IV and ridden by James Graham, ran 1 1/8 miles over a fast track in 1:49.30 – the fastest Falls City since Silent Eskimo set the stakes record of 1:48.85 in the 1999 renewal – to notch her first graded stakes win in the United States. At age 3, she won the 1 ¼-mile Seleccion (GI) at Hipodromo Argentino de Palermo in her native Argentina.

“This horse just doesn’t get tired,” Graham said. “I think the distance today was perfect for her.”

Blue Prize, who entered the Falls City off a third-place finish in the Grade I Spinster at Keeneland on Oct. 8, stalked in second off the early pace set by multiple stakes winner Money’soncharlotte, who led the field of six through fractions of :23.82 and :47.76. Blue Prize ranged up to her outside as they entered the far turn and clocked six furlongs in 1:12.34 with even-money favorite Faithfully, the Southern California invader from the barn of Hall of Fame trainer Bob Baffert, attempting to keep up in third. Blue Prize got the jump on her rivals and drew away from the field down the lane with overwhelming authority.

“She took a little bit to put things together mentally when I first got her to the United States,” Correas said. “She figured it out in her second start at Saratoga. I think she didn’t really like the wet track at Keeneland in her last start but besides that she’s run really well. I thought she was training the best she has been in her career leading into this race and she proved it.”

Blue Prize, who carried 118 pounds during the victory, is a daughter of Pure Prize out of the Not for Sale (Arg) mare Blues for Sale (Arg), and was bred by Bioart S A.

Rachel’s Temper, Motown Lady and Moneyoncharlotte, who shared the 120-pound starting high weight with Faithfully, completed the order of finish. Weep No More was scratched.

The Falls City is the traditional main dish on the Thanksgiving Day menu at Churchill Downs – a Louisville tradition since 1969 where more than 7,000 turkey dinners are served with all the trimmings, making it the largest number anywhere in the region.

This year’s holiday program also included the 40th running of the $100,000 River City Handicap (GIII), a 1 1/8-mile test for older horses over the Matt Winn Turf Course, which was won by Shining Copper.

Racing at Churchill Downs resumes on “Black Friday” with a 12-race program that begins at 1 p.m. (all times Eastern). The 144th running of the $500,000 Clark Handicap Presented by Norton Healthcare (GI) highlights a program that also includes the 27th running of the $200,000 Mrs. Revere (GII) for 3-year-old fillies at 1 1/16 miles on the Matt Winn Turf Course and the $80,000-added Dream Supreme Overnight Stakes for fillies and mares at six furlongs.

JAMES GRAHAM, jockey of BLUE PRIZE (ARG) (winner): “This horse just doesn’t get tired. You simply have to cross off her last race at Keeneland over the slop. She’s been brilliantly consistent throughout her career besides that race. I think the distance today was perfect for her. When she ran in the Locust Grove she ran well but I think it was just a bit too short for her. I breezed her from the gate at Keeneland (Nov. 16) and she looked like a completely different horse.”

IGNACIO CORREAS IV, trainer of BLUE PRIZE (ARG) (winner): “She took a little bit to put things together mentally when I first got her to the United States. She figured it out in her second start at Saratoga. I think she didn’t really like the wet track at Keeneland in her last start but besides that she’s run really well. I thought she was training the best she has been in her career leading into this race and she proved it.”

BRAD COX, trainer of TIGER MOTH (runner-up): “Her last two races have been a little flat. Probably the mud race at Keeneland was more a throw-out than the one-turn mile here. It wasn’t really what she liked. She doesn’t care for the one-turn mile here at Churchill, anyway. But it was good to get her form back and we’ll see what happens after this. We may try her at Oaklawn a few times. She’s five-turning-six and she’s probably going to have a date with a stallion sometime next year, but it was good to get her back in good form. It was her first really good race at Churchill. She’s always trained well here and that’s why we’ve been plugging away with her, because she’s trained so well. But she’s been doing well, so we took another shot and she rewarded us today with a good effort. The winner was clearly the best and hopefully we can build on this.”

FLORENT GEROUX, rider on TIGER MOTH (runner-up): “I was hoping for a little more pace in front. She settled very nicely like she always does and she was giving her best at the end.” 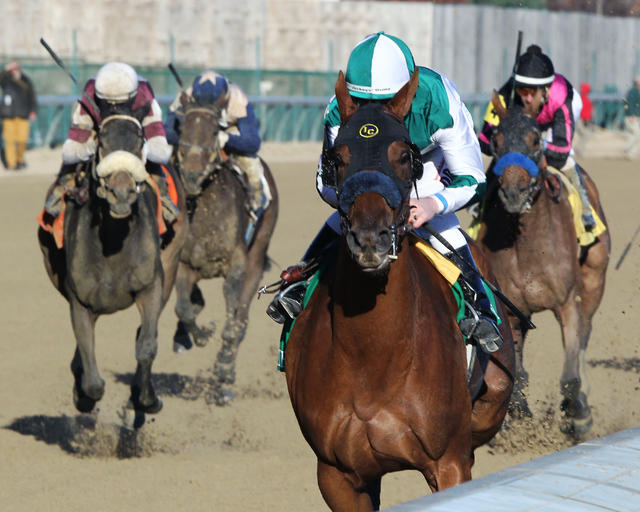