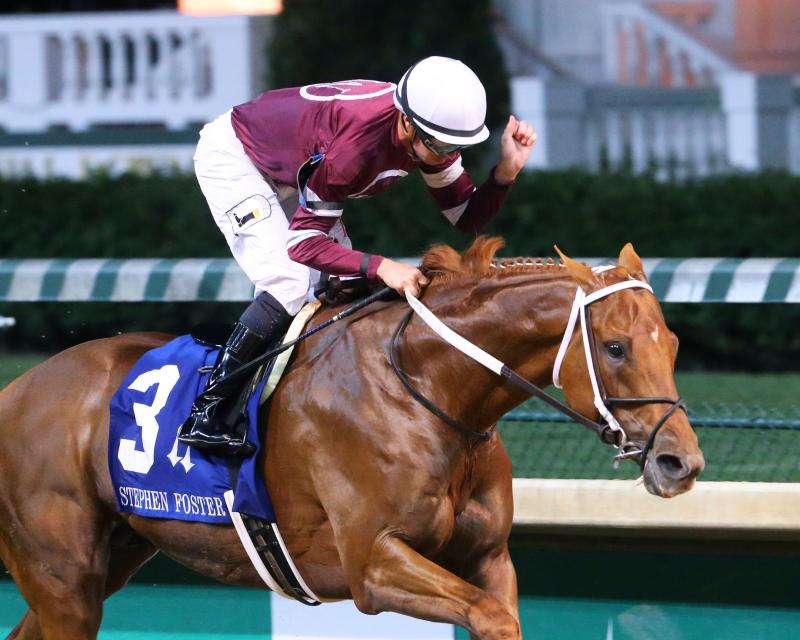 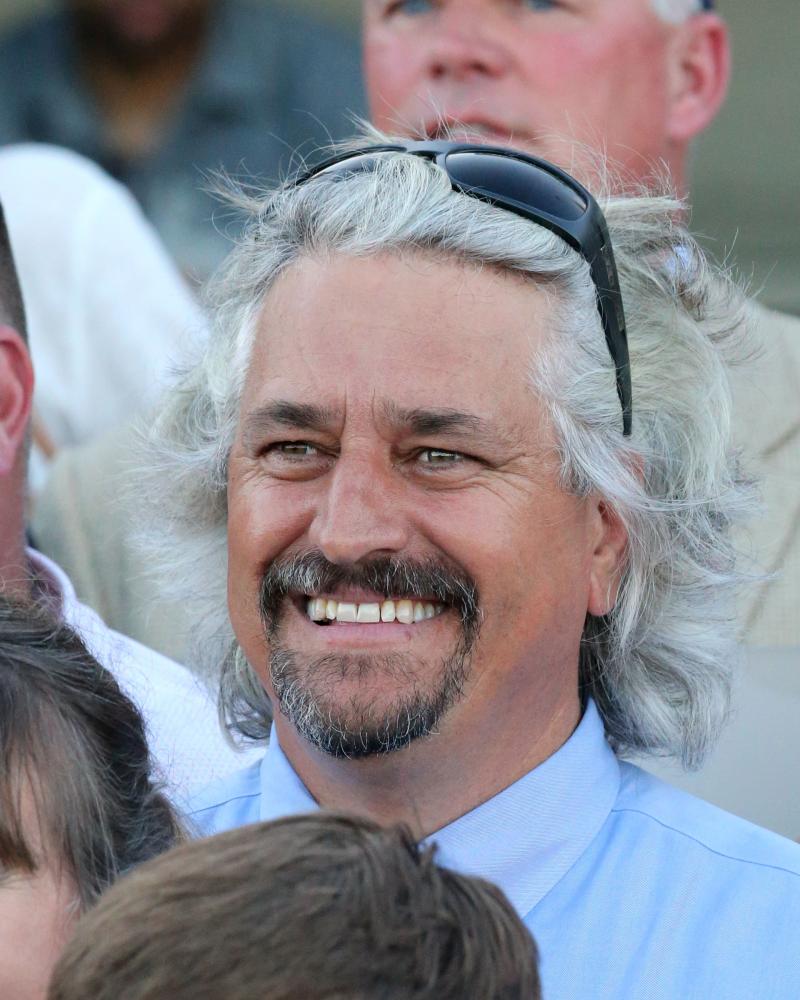 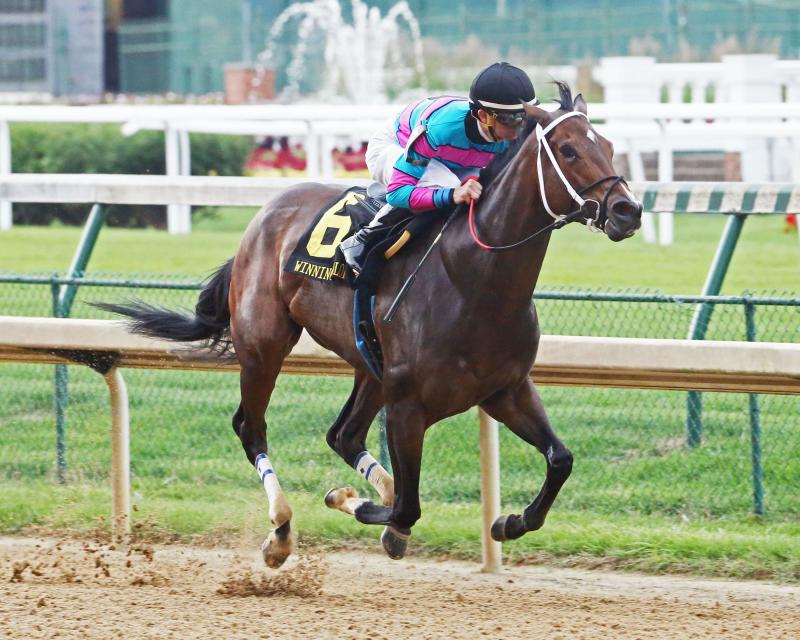 Finley'sluckycharm, winner of the Winning Colors (GIII) on May 27, is expected to compete in Saturday's first running at Churchill Downs of the $100,000 Chicago Handicap (GIII). (Coady Photogarphy, Churchill Downs) 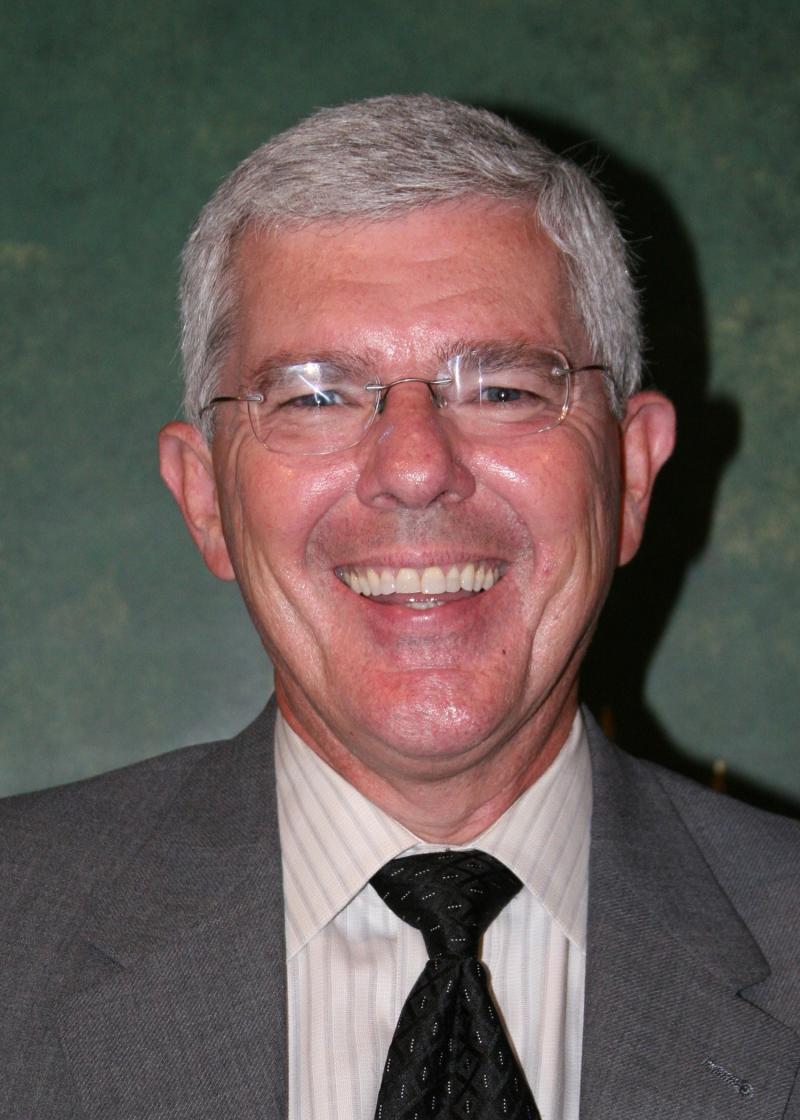 Longtime Churchill Downs announcer Mike Battaglia, a recent inductee into the Kentucky Athletic Hall of Fame, will return to the microphone to call the eight races during the June 22 Twilight Thursday program at Churchill Downs. (Churchill Downs)

“There’s not more I can say then this horse is simply the real deal,” Asmussen said. “We’ll look at races at Saratoga for his next start, possibly the Aug. 5 Whitney (GI), but the big relief is already getting him a spot in the Breeders’ Cup Classic.”

Gun Runner covered the Stephen Foster’s 1 1/8-mile distance in 1:47.56 – the fifth-fastest running of the race. The colt’s victory margin was a record and eclipsed Street Cry (IRE), a winner of the Dubai World Cup in his previous start, who won the 2002 Foster by 6 ½ lengths.

“You know, going back and thinking about the race, it’s very rare as a jockey that you can feel a horse never getting tired in a 1 1/8-mile Grade I,” Geroux said. “He’s a pretty phenomenal horse.”

There was no rest for the weary as the 30-year-old French jockey breezed two horses for Asmussen on Sunday morning.

Battaglia, who spent 19 years as Churchill Downs’ announcer (1978-96), will step behind the mic for Thursday’s eight-race program that kicks off at 5 p.m. (all times Eastern).

STAKES PROBABLES – Next Saturday’s 11-race card at Churchill Downs is highlighted by the $100,000 Chicago Handicap (Grade III) for fillies and mares at seven furlongs.

The Chicago Handicap will be staged for the 28th time Saturday but this will mark the first time it will be held at Churchill Downs. Previously, the race was staged at Churchill’s sister track, Arlington Park near Chicago.

Finley’sluckycharm, the 5 ½-length winner of the May 27 Winning Colors (GIII), is expected to headline the field. Other possible starters include Crooked Stick, Kathballu and She Maybe Wild.

DOWN THE STRETCH – There’s a $108,427 carryover for the 20-cent minimum Single-6 Jackpot on Sunday’s 10-race card. The Single-6 covers Races 5-10 and starts at 2:43 p.m. ET. … The “Who’s the Champ? Handicapping Contest” returns Sunday. Interested participants can enter for $35 ($30 for TSC Elite members) for a chance to win the $1,000 cash voucher first prize by placing mythical $2 win and place bets on Races 3-8. Second place receives a $500 voucher and third place is worth a $200 voucher. Registration takes place between 11:30 a.m. and 1:30 p.m. on the Clubhouse second floor at the top of the Gate 17 escalators. … Saturday’s $100,000 Chicago Handicap (Grade III) is the centerpiece of an action-packed, four-day, Thursday-Sunday racing week at Churchill Downs. Post times each day: Thursday (5 p.m.), Friday (12:45 p.m.), Saturday (12:45 p.m.) and Sunday (12:45 p.m.). … The Twilight Thursday abbreviated eight-race program starts at 5 p.m. and is highlighted by $1 beers, food trucks (Red Top Gourmet Hot Dogs, Pollo, 502 Café, Mark’s Feed Store and Zoom Zoom Yum), live music on the Plaza stage by Louisville’s Alex Wright and a Wagering 101 tent for betting advice. … The Sunday, June 25 card features the return of Family Adventure Day Presented by Kroger. The day of racing is complimented by plenty of family activities in the Plaza area including pony rides, inflatables, a petting zoo, stick horse races on the turf course, face painting and more. 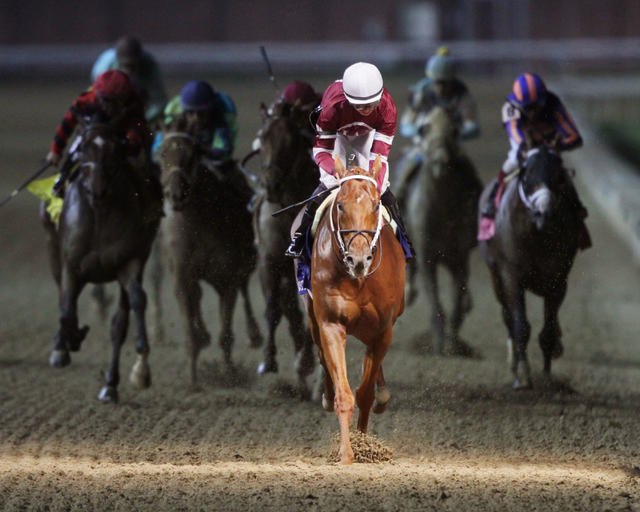