Hall of Fame trainer Steve Asmussen is poised to close the 2020 Churchill Downs Spring Meet on a charge with 15 horses entered in the final three days of racing including 2019 Champion Older Dirt Female Midnight Bisou (3-5 on the morning line) in the $200,000 Fleur de Lis presented by Coca-Cola (GII) and promising juvenile Cazadero (8-5) in the $100,000 Bashford Manor presented by TwinSpires.com (GIII).

Saturday’s 11-race program is highlighted by the $500,000 Stephen Foster presented by Coca-Cola (GII) but many racing fans will be focused on the Fleur de Lis with a star-studded matchup between Midnight Bisou and last year’s Longines Kentucky Oaks (GI) winner Serengeti Empress.

“This has been an unprecedented year in more ways than one,” Asmussen said. “The (national) stakes schedule has not been as traditional as it used to be. We gave (Midnight Bisou) ample time to get over the trip and effort she put in at the world’s richest horse race (the $20 million Saudi Cup) in February. She was quarantined in Chicago and eventually moved to Keeneland thereafter. Her time off lasted longer than expected, which wasn’t ideal at the time but is now.”

“She’s always been a beautifully kind filly to train,” Asmussen said. “She’s become more confident in her training over the last two years.”

Saturday’s Fleur de Lis is a Breeders’ Cup “Win and You’re In Distaff Division” series race. The winner will get an automatic berth to the season-ending championship race on Nov. 7 at Keeneland.

“Her next two races will likely determine which (Breeders’ Cup) race we could point toward,” Asmussen said. “We have constantly discussed where we are at with her training and progression but we know how well she performed against some of the world’s best racehorses in Saudi.”

Another top contender for the Asmussen barn entered Saturday is Stonestreet Stables’ debut winner Cazadero in the Bashford Manor. The precocious 2-year-old son of Street Sense won his debut by 8 ¾ lengths at odds of 5-1. Asmussen’s go-to rider Ricardo Santana Jr. will be in the irons for the six furlong Bashford Manor, which will go as Race 8 on Saturday.

Entering the final three days of the meet, Asmussen remained one win behind Dale Romans, 742-to-741, for the all-time leading trainer mark at Churchill Downs. Asmussen surpassed Romans’ mark earlier in the meet but, in turn, Romans won five races in less than two weeks to retake his spot on top.

COX CONFIDENT OWENDALE CAN TAKE A STEP FORWARD IN SATURDAY’S STEPHEN FOSTER – Rupp Racing’s multiple Grade III winner Owendale will attempt to take a step forward to become one of the top older horses in the country in Saturday’s $500,000 Stephen Foster presented by Coca-Cola (GII).

“He’s only had one start this year (in the $100,000 Blame) but his victory was visually very impressive for us,” trainer Brad Cox said. “It’s only one race but we’re hoping he keeps showing that positive progression from a 3-year-old to an older 4-year-old. The Blame was a one-turn race, which is not his preferred distance and a distance he hasn’t run at in several starts. The 1 1/8-mile distance in the Stephen Foster should definitely suit him better and we’re confident he can take that next step forward to becoming one of the top handicap horses in the country.”

Saturday’s Stephen Foster is the marquee race of the 2020 Spring Meet at Churchill Downs with the winner receiving an automatic berth to the Breeders’ Cup Classic (GI) on Nov. 7 at Keeneland. The Stephen Foster has had a strong influence on the Breeders’ Cup Classic and Horse of the Year honors. Four horses used victories in the Stephen Foster as part of their résumés in Horse of the Year campaigns: Black Tie Affair (1991), Saint Liam (2005), Curlin (2008) and Gun Runner (2017). In addition, two runner-ups were crowned Horse of the Year: Mineshaft (2003) and Wise Dan (2012). Also, Awesome Again (1998) and Blame (2010) completed same-year Foster-Classic doubles. Fort Larned won the Classic in 2012, and won the Foster the following year prior to a fourth-place run in his bid for a second Classic win.

Owendale was made the 4-1 third choice on the morning line for Saturday’s Stephen Foster and his regular pilot Florent Geroux will be in the irons. The Stephen Foster is carded as Race 10 of 11 with a post time of 5:47 p.m.

The Late Pick 5 will begin in Race 7 at 4:12 p.m. ET with a 5 ½-furlong allowance event on the Matt Winn Turf Course. The competitive field of nine betting interests features a tepid 3-1 morning line choice in the six-time winner Wellabled for owner Carolyn Wilson and trainer Larry Rivelli.

The 15-percent takeout wager will close on the 13-horse Regret that, like the opening leg, features a mild 3-1 morning line favorite in recent allowance winner Crystal Cliffs (FR).

Free Brisnet past performances are available for Saturday’s 11-race card at www.churchilldowns.com/handicapping.

BELMONT STAKES WINNER TIZ THE LAW MADE 7-2 FAVORITE IN POOL 5 OF KENTUCKY DERBY FUTURE WAGER – Sackatoga Stable’s $1 million Belmont Stakes (Grade I) winner Tiz the Law has been made the 7-2 morning line favorite in Pool 5 of the Kentucky Derby Future Wager (“KDFW”) that will run Friday-Sunday.

Tiz the Law, the multiple Grade I-winning son of Constitution, reaffirmed his status as the early Kentucky Derby favorite with his victory in last Saturday’s 1 1/8-mile Belmont Stakes, the kickoff leg to this year’s rescheduled Triple Crown series. Trained by Barclay Tagg, Tiz the Law took strong attention in all four previous pools of the KDFW closing at odds of 11-1, 8-1, 7-1 and 5-1, respectively. Tiz the Law is expected to have one final prep prior to the Kentucky Derby in the $1 million Travers (GI) on Aug. 8 at Saratoga.

Also likely to generate strong interest in Pool 5 of the KDFW is C R K Stable’s $400,000 Santa Anita Derby (GI) winner Honor A. P. (5-1). Trained by John Shirreffs, the lightly-raced Honor A. P. scored a mild 2 ¾-length upset over Authentic in last month’s Santa Anita Derby. The top three finishers from that race are individual interests in Pool 5 of the KDFW. Authentic, who finished second as the 1-2 favorite, is tabbed as the 8-1 third choice on the morning line while third-place finisher Rushie is 20-1.

The popular “All Other 3-Year-Old Males” was made the overall co-second choice on the morning line at 5-1. Also added for this pool is the return of the “All 3-Year-Old Fillies” which was made 15-1 on the morning line in the event the connections of top females, such as streaking three-time stakes winner Swiss Skydiver or Acorn (GI) winner Gamine, opt to face open company.

TV SCHEDULE THIS WEEK – The racing action from Churchill Downs Racetrack throughout the 2020 Spring Meet will be broadcast on FOX Sports’ “America’s Day at the Races,” which will air every race day on either FS1 or FS2. Along with the Fox Sports coverage, racing on Saturday from Churchill Downs will air from 5-6 p.m. on NBC.

CROSS COUNTRY PICK 5 – On Saturday, Churchill Downs will partner with the New York Racing Association and Thistledown for an all-stakes cross-country Pick 5 wager.

The 50-cent bet, with a low 15 percent takeout, will be hosted by NYRA and feature the following races:

Wagering will be available on ADWs across the country including www.TwinSpires.com. Free Brisnet past performances are available for Churchill Downs races at www.churchilldowns.com/handicapping.

DOWN THE STRETCH – Friday’s nine-race card at Churchill Downs had a first post of 1 p.m. The Single 6 Jackpot (Races 4-9) had an $8,317 carryover. … Jockey Miguel Mena was three wins away from 2,000-career victories. He had four horses entered on Friday at Churchill Downs. … “Inside Churchill Downs” will air Friday at 6 p.m. on ESPN 680/105.7. The one-hour horse racing program will provide racing fans with insight and handicapping information for Saturday’s Stephen Foster program plus guests Kenny Rice of NBC and trainer Tom Amoss. Those outside the Louisville area can listen live on www.espnlouisville.com 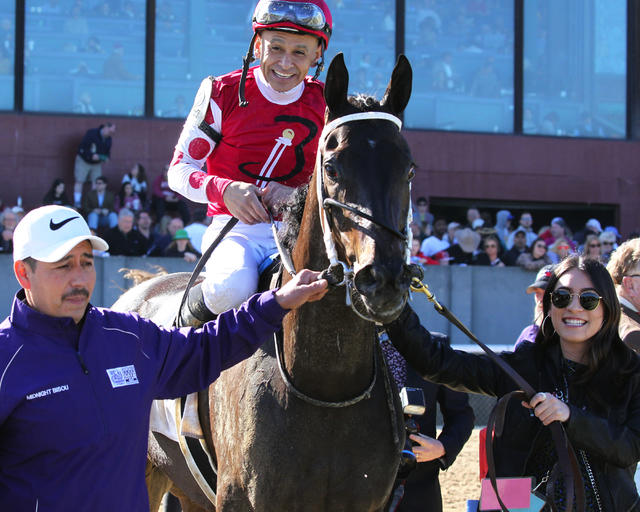