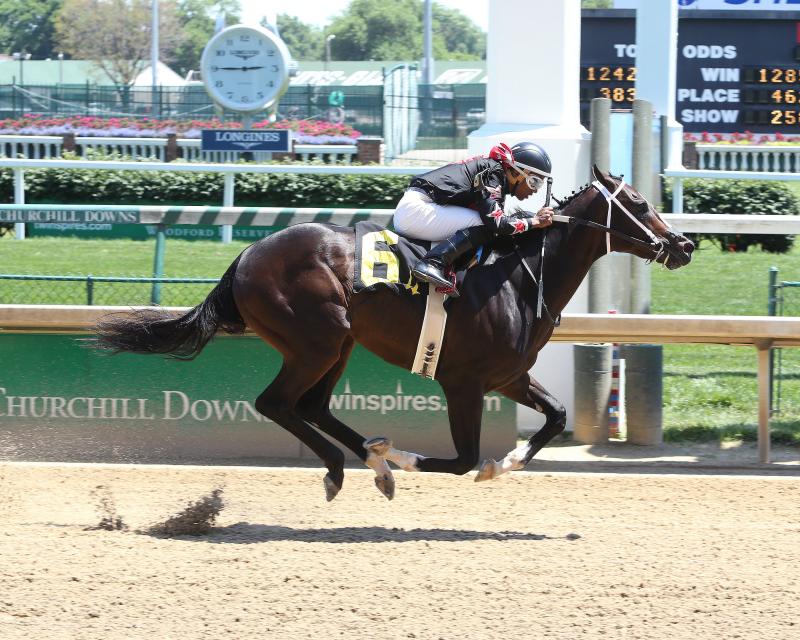 Winchell Thoroughbreds' Tricky One, a 4 1/2-length winner in her June 3 debut at Churchill Downs, will face nine rivals in her bid to provide trainer Steva Asmussen with the his fifth victory in the Debutante Stakes for 2-year-old fillies. (Coady Photography | Churchill Downs) 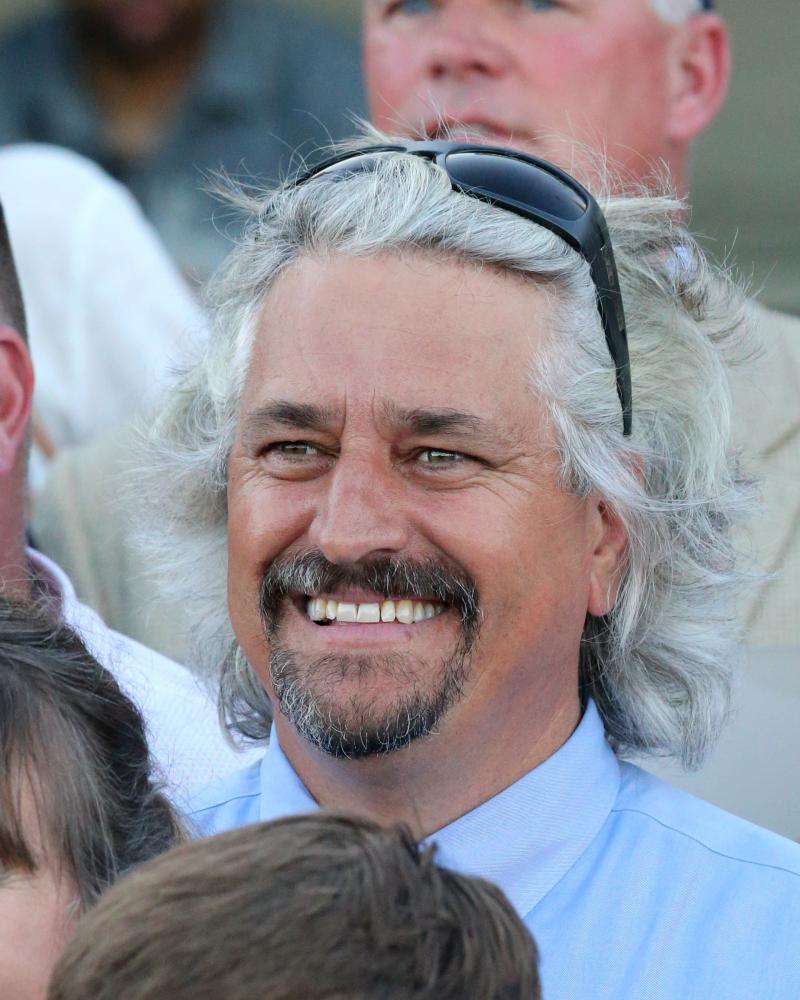 Trainer Steve Asmussen, who will be enshrined in racing's Hall of Fame this summer, has won both the Bashford Manor (GII) and Debutante Stakes four times. (Coady Photography | Churchill Downs) 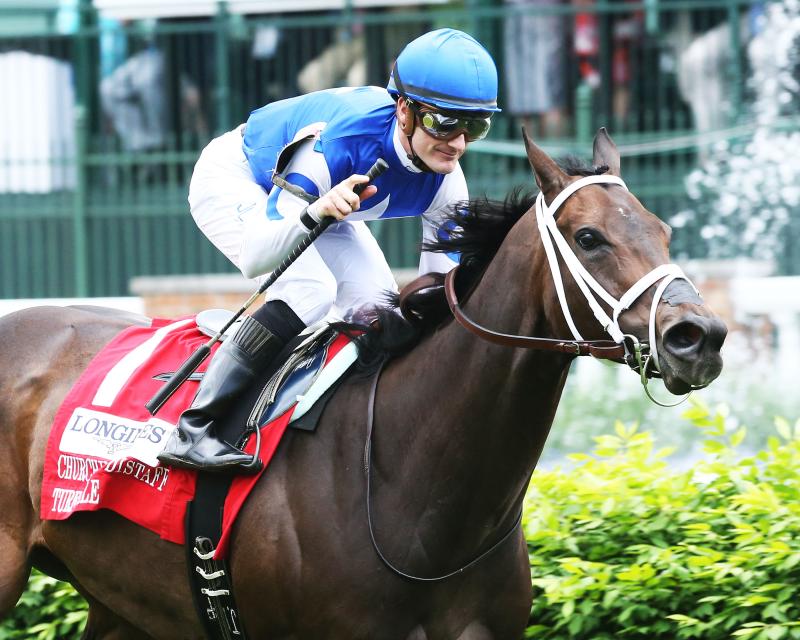 Robert Masterson's Tepin, winner of the recent Queen Anne (Group One) at Britain's Royal Ascot and the Churchill Distaff Turf Mile (GII), is being pointed toward a run in the $1 million Woodbine Mile (GI) on Sept. 17. (Coady Photography | Churchill Downs) 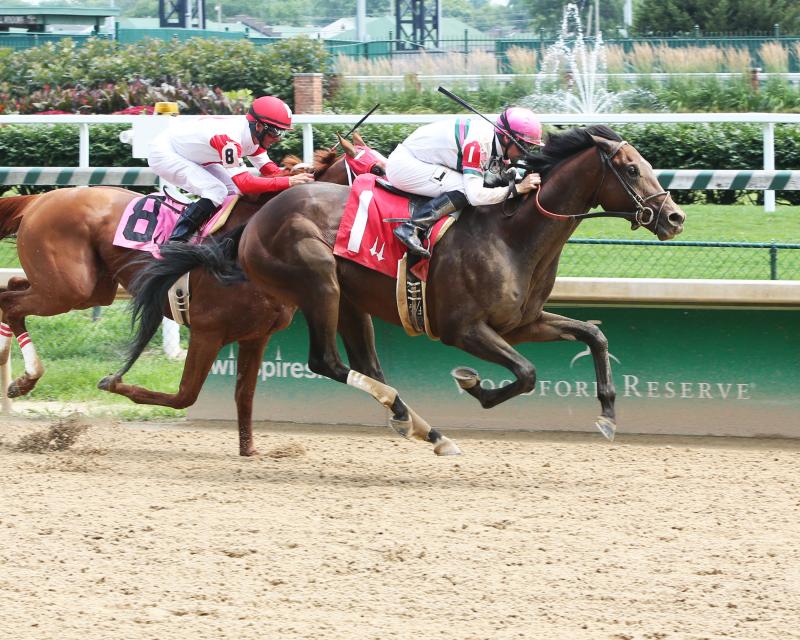 Trainer Steve Asmussen has found plenty of success in the past with 2-year-olds early in the summer and this year appears to be no exception as the soon-to-be-enshrined Hall of Fame trainer will be sending out a pair of his better juveniles in Saturday night stakes on closing night of Churchill Downs’ 38-day Spring Meet.

Tip Tap Tapizar and Tricky One, both coming off maiden victories first time out, will have the chance to showcase their talent in the Bashford Manor Presented by Thorntons (Grade III) and the Debutante Presented by GE Appliances (Listed) respectively. Both races are six furlongs and carry a $100,000 purse.

“They are both coming off some very impressive maiden wins and hopefully they can step up, but they’re doing real well,” Asmussen said.

A Louisiana-bred son of leading freshman sire Tapizar, Tip Tap Tapizar broke his maiden in wire-to-wire fashion by 3 ¼ lengths on June 11, just eight days after Tricky One broke her maiden. The daughter of Unbridled’s Song made her first start a winning one in a similar running style of her stable mate by 4 ½ lengths. Should both Asmussen-trainees mirror their running style Saturday evening, they will probably not be alone as both races appear to have contenders with a lot of speed.

“I think that when you put multiple winners in together, they all don’t get their desired spot so that’s what these races are for,” Asmussen said.

Jockey Ricardo Santana Jr. has the mount aboard Tip Tap Tapizar in the Bashford Manor, while Florent Geroux will pilot Tricky One in the Debutante.

TEPIN DOING WELL FOLLOWING ROYAL ASCOT TRIP – Champion Turf Mare Tepin has been settling back into her Churchill Downs base well since returning on Monday following a successful trip overseas to Royal Ascot where she won the Queen Anne (Group I).

“She’s good, she’s happy,” trainer Mark Casse’s son and assistant Norman said. “We’ll probably be going up on the last load to Saratoga and start training her up there. It’s kind of crazy to go out there and look at her because it looks like she didn’t even go over there. She’s happy and she hasn’t missed a beat since she got back.”

Since arriving to the Casse barn on Monday, the 5-year-old daughter of Bernstein has been doing nothing more than walking the shed row and will likely not begin any serious training until arriving at Saratoga where Casse plans to send a string of 32 horses.

“If she gets a little bit to be too much of a handful in the shed row then we may take her out to the track,” Casse said. “But for right now we’re just walking her.”

Tepin’s 5-year-old campaign is unblemished in five starts this year. Prior to her international triumph at Royal Ascot, she punched in a pair of victories at Tampa Bay Downs this winter in the Feb. 12 Endeavour (GIII) and March 13 Hillsborough (GII) that were followed by decisive wins in the April 16 Jenny Wiley (GI) at Keeneland and May 7 Churchill Downs Distaff Turf Mile (GII).

The next major goal for the champion mare is the $1 million Woodbine Mile (GI) on Sept. 17, but there is an “outside chance” she could run once before that in the $400,000 Ballston Spa (GII) on Aug. 27 at Saratoga, a race where she suffered her most recent defeat in last year’s edition to Dacita (Chi).

“The goal is to run at Woodbine,” Casse said. “If she’s really training well we could run at Saratoga, but she’d have to be really coming out of her skin for us to do that.”

“This race seems to fit the schedule real well. He typically runs a lot better when his races are spaced,” Stall said. “He’s a typical (son of) Uncle Mo – kind of a long and lanky horse.”

Stall previously won the West Virginia Derby in 2013 with Departing.

A former Kentucky Derby Presented by Yum! Brands (GI) aspirant, Forevamo was a close second to Gun Runner in the Risen Star (GII) and ran a distant fifth behind that opponent in the Louisiana Derby before finishing second to Sharp Azteca in the Pat Day Mile (GIII) on the May 7 Kentucky Derby undercard.

COX OPTS FOR KELLY’S LANDING WITH WABEL – Flurry Racing Stables LLC’s Wabel, who is cross-entered in Saturday’s $67,000-added Kelly’s Landing Overnight Stakes and the $100,000 Iowa Sprint at Prairie Meadows, will stay at home to run at Churchill Downs on closing night, according to trainer Brad Cox.

“I like the convenience of being here and knowing that he likes the track and the distance,” Cox said. “They’re both equally solid races, but it would just be easier to run out of his own stall in the Kelly’s Landing.”

A son of Curlin, Wabel has won two consecutive races against allowance company. Since being claimed from trainer Wesley Ward last September, he has never finished worse than second in six starts.

‘DOWNS AFTER DARK’ DETAILS – Saturday’s 11-race closing night card is billed as “Downs After Dark Presented by Stella Artois and Jack Daniel’s.” Admission gates open Saturday at 5 p.m. (all times Eastern), the first race is 6 p.m. and the “Downs After Dark” theme is “My Country ’Tis of Thee” in which guests are encouraged dress in their finest red, white and blue to celebrate the Fourth of July holiday weekend and enjoy draft beer, specialty cocktails, BBQ, food trucks, “Bet or No Bet Presented by Thorntons” and live music by local country band Wildwood.

General admission is $10 and reserved seats start at $25. Seating in the Courtyard is available for $69 and Winner’s Circle Suites for groups of 18-20 are also available. Tickets and dining options can be purchased online at www.churchilldowns.com.

Also, special pricing is available to active duty military and veterans who present a valid military ID. Members of those groups will receive 50 percent off of general admission and box seating for up to six for Saturday night’s program. 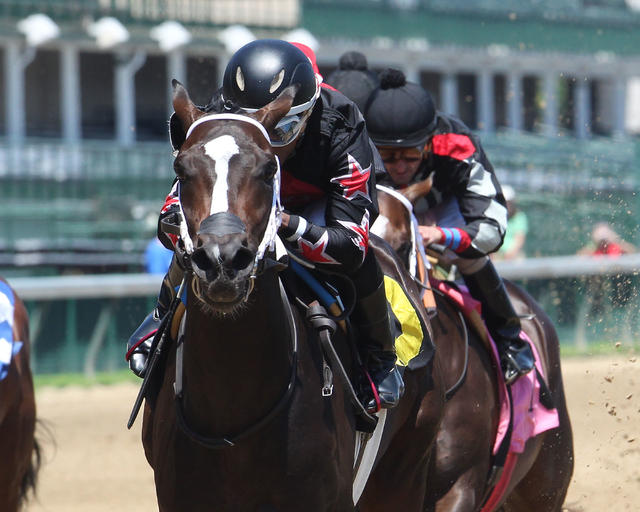