Hall of Fame horseman Steve Asmussen tied South Louisville native Dale Romans as the all-time leading trainer in Churchill Downs history on Thursday when 2-year-old filly Thoughtfully rolled to a comfortable 8 ¾-length victory in the second race for win No. 737 beneath the historic Twin Spires.

“This was definitely worth coming back early from the OBS sales in Florida,” 54-year-old Asmussen said. “It is a very special win and we are very excited to reach this very significant milestone.”

Romans has been the record-holder since Nov. 12, 2017 when he surpassed Hall of Famer Bill Mott, who was Churchill Downs’ all-time leader for more than 31 years.

Asmussen will attempt to surpass Romans on Friday. He has entries in the first three races at Churchill Downs as well as Races 6, 8 and 9. Romans, who is seeking his first win of the Spring Meet, has entries in Races 4 and 5.

Born Nov. 18, 1965 in Gettysburg, S.D., Asmussen was destined for horse racing. His mother Marilyn (aka “Sis”) was a trainer and his father Keith was a jockey and trainer. For more than 50 years, they’ve managed one of the Southwest’s premier equine facilities known for boarding and breaking young horses, the Asmussen Horse Center and El Primero Training Center in Laredo, Texas.

Asmussen’s older brother Cash was the 1979 Eclipse Award-winning apprentice, a champion jockey in France and a winner of more than 3,000 races before his retirement in 2001.

Asmussen helped his parents around the stable by mucking stalls and walking horses at an early age. He’d later follow in his brother’s footsteps as a jockey and won his first race on April 4, 1982. He rode in New Mexico, California and New York and won 63 races and $687,224 before he was forced to retire from riding because he grew too big (note: today he stands over 6’0 tall and is about twice his former riding weight).

Asmussen took out his trainer’s license in 1986 and saddled his first winner on July 19, 1986 at Ruidoso Downs in New Mexico at age 20.

“I wasn’t here that day; I was at Arlington Park,” Asmussen said. “Paul Holthus did me a favor and saddled Snake Eyes for me while I stayed back in Chicago.”

“My first graded stakes win ever was the Derby Trial with a horse by the name of Valid Expecations for the Ackerley Brothers,” Asmussen recalled. “We brought him to Churchill Downs in a horse trailer at the old Stakes Barn where the old Racing Office used to be. We win the Derby Trial for my first graded stakes win ever and the next day you walk up to the fence and watch the Derby horses train. Our family friend my whole life, Mr. (Wayne) Lukas, stops by and says, ‘When you bring a horse for the Derby, don’t forget to bring a pony to get away from the media.’ And that’s what I thought, ‘Yeah, right! When I bring a horse to the Derby …’ That’s all. ‘Yeah right. Whatever. I better get back in my two-horse trailer and get back to Texas.’

“From how foreign it was for him saying that to me was in 1996 to now saying there’s a shot for a temporary period of time I might be on the lead as the all-time leading trainer at Churchill Downs, that’s how special it is. I’m a kid who grew up wanting to do this. And the fire doesn’t feel like it’s going away if that matters.”

Since then, Asmussen has had a Hall of Fame career and was enshrined in 2016. A key player in his powerhouse operation is chief assistant Scott Blasi, a native of Caney, Kansas, who began working with Asmussen in 1996 and oversees his Churchill Downs stable at Barn 38.

Team Asmussen first brought a string to Churchill Downs for the 1996 Fall Meet and has been stabled at the Louisville racetrack annually since the fall of 1997. The first of his record 22 Churchill Downs training titles came at the 2001 Fall Meet.

At Churchill Downs, Asmussen seeks his first Kentucky Derby win – he’s finished second twice with Nehro (2011) and Lookin At Lee (2017) in 20 starts – but has won the Longines Kentucky Oaks twice with Summerly (2005) and Untapable (2014). Overall, he’s won 79 stakes races at Churchill Downs, which ranks second only behind Mott’s 95. He’s a two-time winner of the Stephen Foster (Curlin in 2008 and Gun Runner in 2017) and one-time winner of the Clark (Gun Runner in 2016).

Asmussen is rapidly closing on another significant career milestone. At the start of Thursday, Asmussen had 8,866 career wins, which ranked second and was 579 victories behind all-time North American win-leader Dale Baird’s 9,445. 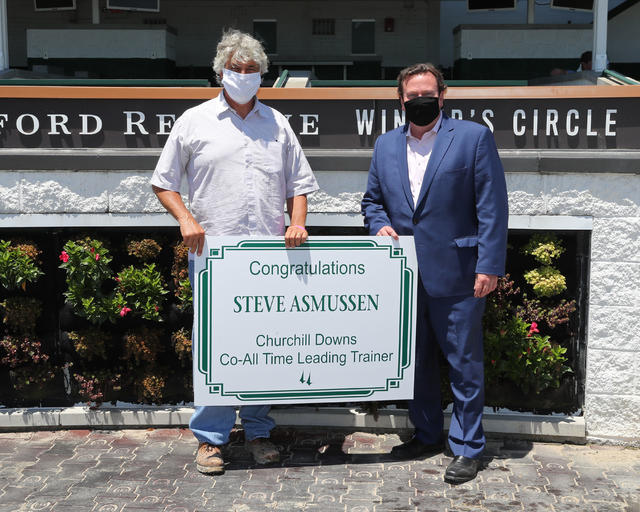