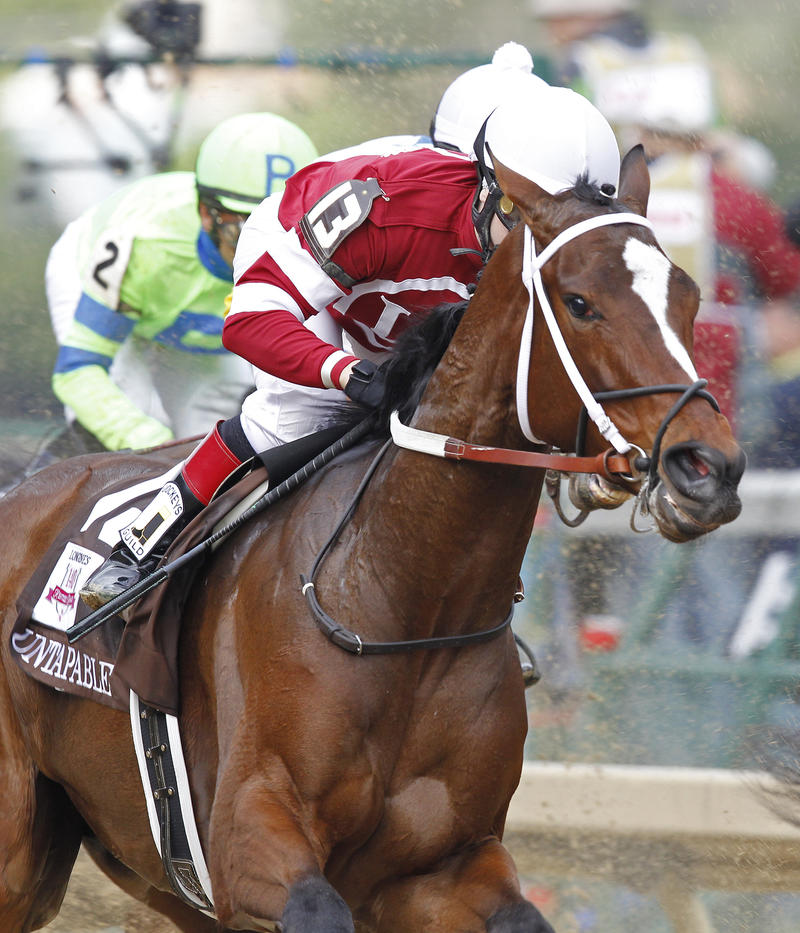 Winchell Thoroughbreds' Untapable made the 2014 Longines Kentucky Oaks (GI) her third victory in as many starts at Churchill Downs. (Churchill Downs) 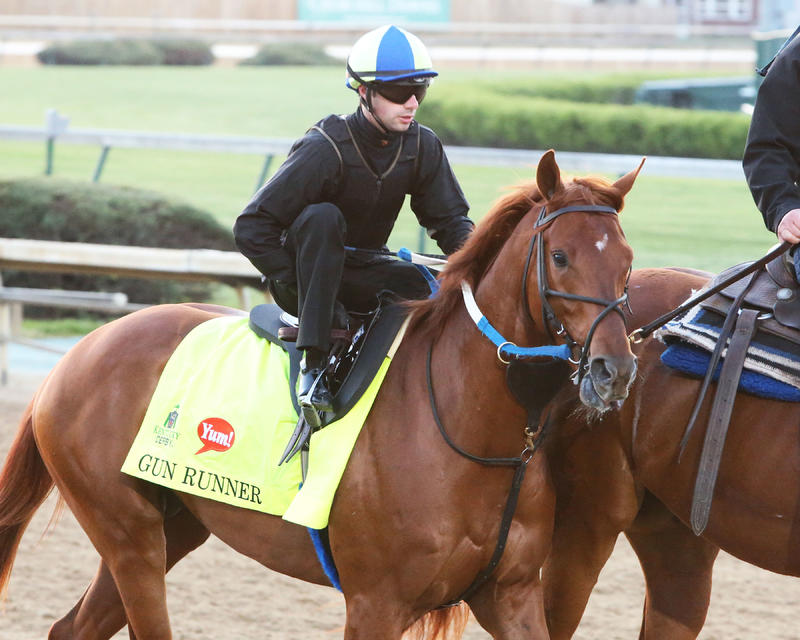 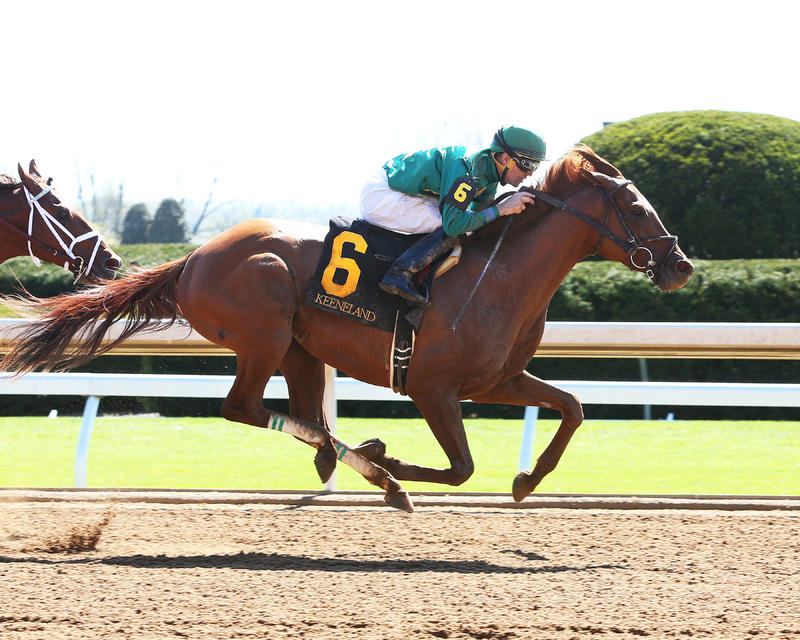 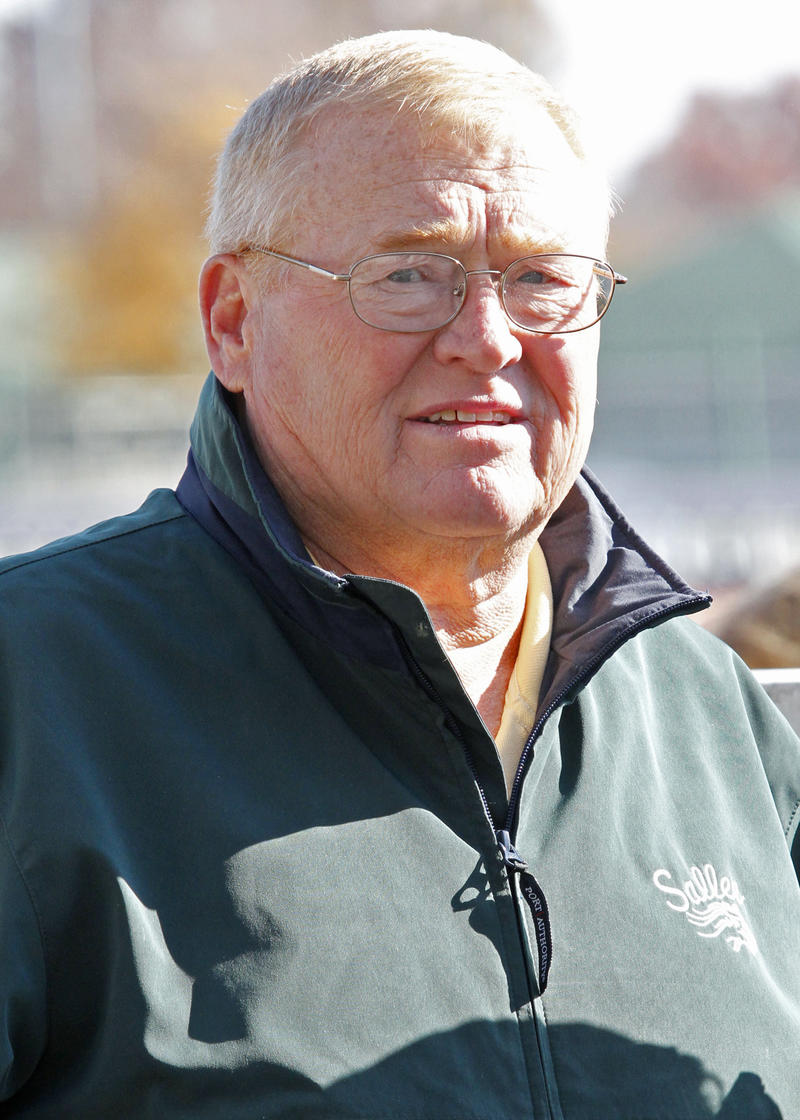 The Steve Asmussen-trained duo of Gun Runner, third in the Kentucky Derby Presented by Yum! Brands (Grade I), and 2014 Longines Kentucky Oaks (GI) winner Untapable both breezed a half-mile for their respective starts in the $100,000 Matt Winn (GIII) and $200,000 Fleur de Lis Handicap (GII) on Saturday night at Churchill Downs.

“They both went nice and smooth halves,” Asmussen said. “I feel like we’re set and on go for Saturday.”

Asmussen was still relishing Saturday’s significant victory by Creator in the Belmont Stakes (GI), which gave the soon-to-be-enshrined Hall of Fame trainer his first win in the third jewel of the Triple Crown. His other win in an American classic came when Curlin won the 2007 Preakness Stakes over Kentucky Derby winner Street Sense.

“It was extremely exciting, it really was,” Asmussen said of Creator’s victory. “The way the race unfolded for him to redeem himself from the Kentucky Derby was very satisfying. For me, the reason I was so concerned with the pace had a lot to do with the significant factor in Curlin not winning it.”

Asmussen said that Creator would leave to get some time off at WinStar Farm on Monday afternoon and would be under consideration for the $1.25 million Travers (GI) at Saratoga on Aug. 27.

Prior to his third-place effort in the Kentucky Derby behind Nyquist and eventual Preakness winner Exaggerator, Gun Runner was victorious in Fair Grounds’ two major preps for the Kentucky Derby, the Risen Star (GII) and Louisiana Derby (GII). Should he exit the Matt Winn in good order, Asmussen plans on sending Gun Runner to the $1 million Haskell Invitational (GI) at Monmouth Park on July 31, a race that was a comeback race for Triple Crown winner American Pharoah last year.

“I think he’s proved his worth with what he’s done this year with the Louisiana Derby win and the third in the Kentucky Derby, and I think that this is a very good bridge for him to get to the Haskell,” Asmussen said.

Untapable has not found the winner’s circle since a win in last year’s Apple Blossom (GI) at Oaklawn Park, but boasts a spotless 3-for-3 record at Churchill Downs. The 5-year-old daughter of Tapit made her career debut at Churchill Downs a winning one as a 2-year-old before going on to win that year’s Pocahontas (GII). The following year, she won the Kentucky Oaks as the 2-1 favorite.

“That was why we wanted to run her back here in Saturday’s race,” Asmussen said. “It has been too long since we’ve won with her and I think we just need to take our best shot at winning and I think the significance of it being a Win And You’re In race for the ($2 million) Breeders Cup Distaff adds to it.”

EAGLE WORKS HALF-MILE FOR STEPHEN FOSTER – William Farish’s Eagle, runner-up to Majestic Harbor in the Alysheba (GII) on the May 6 Kentucky Oaks undercard, recorded his final work for Saturday night’s $500,000 Stephen Foster Handicap (GI) with a half-mile breeze in :49.60 under exercise rider Joel Dominguez on Monday at Churchill Downs.

Churchill Downs clockers caught the son of Candy Ride in splits of :24.20 and :37 before galloping out five furlongs in 1:02.80.

“Nice and smooth,” trainer Neil Howard said. “It was just an easy half. He galloped out nice and cooled out good. He’s pretty much been on a steady schedule to say the least so this was nothing complicated.”

FUHRIOUSLY KISSED ON TARGET FOR REGRET FOLLOWING SUNDAY’S WORK – Trainer Gary “Red Dog” Hartlage believes that Fuhriosuly Kissed, winner of a maiden race on May 28 on the Churchill Downs main track, worked well enough on the Matt Winn Turf Course on Sunday for a step up in class in Saturday’s $100,000 Regret (GIII). The daughter of Langfuhr worked five furlongs in 1:03.60 on the Matt Winn Turf Course with Joe Johnson up.

“She finished up real good,” Hartlage said. “We’ll just have to see if she’s good enough. We’ll see what happens. Joe was just kind of sitting on her. She’ll love that (1 1/8-mile) distance so that ought to help her. This would be a big race for her and we’ll all be looking forward to it. I just hope that we get in.”

DOWN THE STRETCH – Effinex, who ran second to Triple Crown winner American Pharoah in last year’s Breeders’ Cup Classic (GI) at Keeneland before winning the Clark Handicap Presented by Norton Healthcare (GI), arrived from his New York base on Sunday morning and is stabled in Barn 44. Hall of Fame jockey Gary Stevens has the one-time mount as regular pilot Mike Smith is scheduled to ride Songbird in Saturday’s $200,000 Summertime Oaks (GII) at Santa Anita. … El Kabeir is scheduled to arrive from New York on Monday at approximately 5 p.m. and will be stabled in Barn 45. … The theme for Saturday night’s “Downs After Dark Presented by Stella Artois and El Jimador” is the sixth annual “White Party” in which guests are encouraged to wear their best summer whites. …Musical entertainment on the Plaza Stage on Saturday night will be provided by The Bishops (www.thebishopslive.com). … The Kentucky Museum of Art and Craft (“KMAC”) and Churchill Downs have partnered to bring the only public showing of the 2016 KMAC Couture Collection on Saturday night. KMAC Couture Fashion Shows will be held between races in the Aristides Garden and Plaza Stage to showcase the wearable runway art that features and supports emerging and established regional artists, costumers, designers and milliners. … Bet or No Bet Presented by Thorntons returns Saturday night for Races 6-9. The promotion will give four lucky fans the chance to wager $1,000 to win on the horse of their choice in their respective race or walk away with a $100 Thorntons gift card. … Saturday night’s specialty cocktail served at select locations around the facility is the Blanco Margarita. … General admission to Churchill Downs is $10 on Saturday night. Box seats are $25 and reserved dining packages are $70. They can be purchased online at www.ChurchillDowns.com/Tickets. … Kentucky Derby-winning trainer Doug O’Neill will be on hand Saturday night to accept the engraved Kentucky Derby 142 trophies for Team Nyquist, which includes owners Paul and Zillah Reddam and jockey Mario Gutierrez. The Reddams and Gutierrez are unable to attend because of a stakes engagement at Santa Anita on Saturday. … Two-time Horse of the Year Wise Dan, who compiled a remarkable lifetime record of 31-23-2-0—$7,7552,920 from 2010-14, will return to Churchill Downs on Saturday night for the stakes race named in his honor. The former Firecracker was renamed the Wise Dan this year to honor Mort Fink’s seven-time Churchill Downs winner that won the Firecracker in 2011 and ’13 for trainer Charlie LoPresti. Wise Dan will parade to the paddock with horses for the race and remain there while the race is being run. … Churchill Downs also will pay homage to its longtime morning line odds maker and former track announcer and television analyst Mike Battaglia on Saturday night. Battaglia, who is in the midst of his 42nd year as Churchill Downs odds maker, stepped down as Turfway Park’s track announcer in March to assume the role as the track’s associate vice president. The longtime northern Kentucky resident called races at Turfway from 1973-2016. Battaglia also described the racing action at Churchill Downs from 1977-97 and served as the simulcast host from 1997-2007. … The official event logos for the 2017 Kentucky Derby Presented by Yum! Brands and Longines Kentucky Oaks will be unveiled between races on Saturday night. …The Stephen Foster Handicap and Fleur de Lis Handicap are Breeders’ Cup Challenge Series “Win and You’re In” stakes events which means the winners will be guaranteed berths in the $6 million Breeders’ Cup Classic (GI) and $2 million Breeders’ Cup Distaff (GI), respectively. This year’s Breeders’ Cup will be held Nov. 4-5 at Santa Anita. … Horse Racing Radio Network (HRRN) will air live coverage of the Churchill Downs stakes action Saturday night from 8-10 p.m. ET. Mike Penna, Jude Feld, Ellis Star and Jennie Rees will anchor the broadcast that will air on Sirius 92, online at www.horseracingradio.net and either ESPN 680/105.7 and/or 93.9 The Ville in Louisville. … The racing week at Churchill Downs kicks off Thursday at 5 p.m. (all times Eastern) with an eight-race Twilight Thursday program that features a 21-day carryover in the Single 6 Jackpot of $560,991. The sequence covers Races 3-8 starting at 5:58 p.m. Racing on Friday starts at 12:45 p.m. Saturday night’s action begins at 6 p.m. Sunday’s Father’s Day program starts at 12:45 p.m. …Saturday night’s special post times: Race 1 (6 p.m.), Race 2 (6:28 p.m.), Race 3 (6:56 p.m.), Race 4 (7:26 p.m.), Race 5 (7:57 p.m.), Race 6 (8:30 p.m.), Race 7 (9:05 p.m.), Race 8 (9:39 p.m.), Race 9 (10:11 p.m.), Race 10 (10:42 p.m.) and Race 11 (11:10 p.m.). … Ten-time Churchill Downs champion jockey Corey Lanerie rode seven winners last week to extend his lead over night-time local leader Julien Leparoux to 44-33. Robby Albarado rode five winners last week to jump ahead of Florent Geroux, 26-23, for third and fourth, respectively. … Mark Casse, attempting to land his first Churchill Downs training title since the 1988 Spring Meet, has a 18-16 lead over five-time Churchill Downs leading trainer Mike Maker in the trainer standings. “Buff” Bradley led all trainers with four victories last week and has 10 overall, which is good for a third-place tie with two-time Churchill Downs training champion Kenny McPeek and 13-time local leader Dale Romans. … Churchill Downs’ all-time leading owners Ken and Sarah Ramsey remain in their familiar position atop the owner’s standings with an 11-7 lead over John C. Oxley. The Nicholasville, Ky. residents are in pursuit of their record-extending 26th local title. 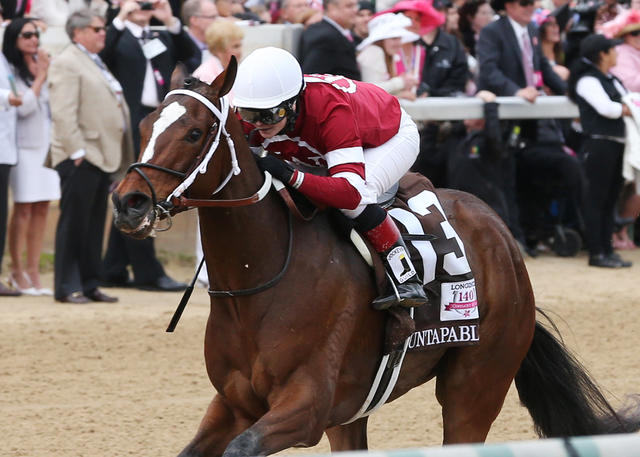