May 4, 2019
| Churchill Downs Communications
LOUISVILLE, KY (Saturday, May 4, 2019) – Slam Dunk Racing and Medallion Racing’s Beau Recall (IRE) rallied from far off the pace to post a 1 ¾-length victory over Got Stormy to win the 34th running of the $400,000 Longines Churchill Distaff Turf Mile (GII) for fillies and mares.

Trained by Brad Cox and ridden by Irad Ortiz Jr., Beau Recall covered the mile distance on the Matt Winn Turf Course in 1:37.12.
Capla Temptress (IRE), Valedictorian and Take These Chains (IRE) took turns on the lead early producing fractions of :23.82 and :48.28 but by the time the field turned for home, the complexion changed.
Capla Temptress and Valedictorian were joined by Got Stormy, who rocketed past and opened a two-length lead at the three-sixteenths pole. At that point, Beau Recall had one horse beat but had clear sailing and reeled in the leader late.
Beau Recall is a 5-year-old daughter of Sir Prancealot (IRE) out of the Great Commotion mare Greta d’Argent (IRE). The victory was worth $235,600 and increased Beau Recall’s earnings to $740,512 with a record of 22-6-5-0.
Beau Recall returned $23, $11.60 and $6.80. Got Stormy, ridden by Tyler Gaffalione, returned $11.80 and $7.20 with Daddy Is a Legend finishing another head back in third under Manny Franco and paying $4 to show.
It was another 2 ¾ lengths back to Environs (GB) who was followed in order by Precieuse (IRE), defending champion Proctor’s Ledge, Capla Temptress, Valedictorian, Raven’s Lady (GB) and Take These Chains.
LONGINES CHURCHILL DISTAFF TURF MILE QUOTES
IRAD ORTIZ JR. (rider of Beau Recall, winner) – “I had a perfect trip. She doesn't have too much speed so she was in the back and was relaxed. When I asked her to run, she was there for me. She was comfortable the whole way."
BRAD COX (trainer of Beau Recall, winner) – “She got a class relief this winter at the Fair Grounds. It picked her head back and she has figured out how to win again. I think ultimately that’s what got her going in the right direction again. She did move forward when she got up here after the Fairgrounds and she showed it today.”
TYLER GAFFALIONE (rider of Got Stormy, runner-up) – “She emptied out. She gave me everything she had. She ran a great race.”
MANNY FRANCO (rider of Daddy Is a Legend, third) – “I had a good trip and my filly gave it a very good try.” 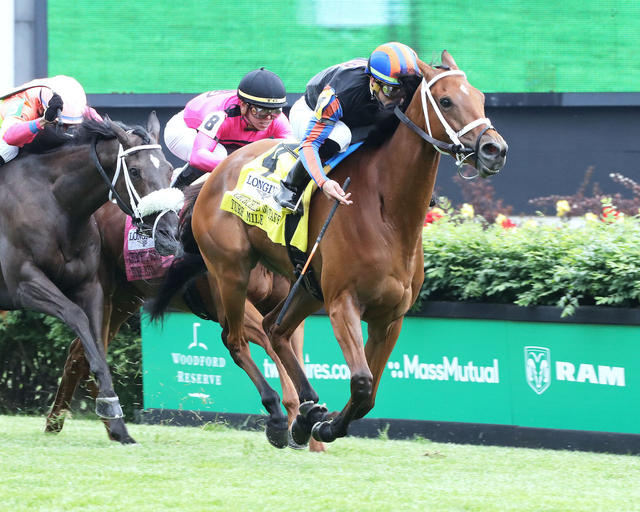