Two of the nation’s most talented filly and mare sprinters, Bell’s the One and Sconsin, will renew their budding rivalry in Saturday’s $300,000 Dream Supreme (Listed) at Churchill Downs.

Bell’s the One and Sconsin have faced one another five times throughout their careers. In their latest renewal, Sconsin bested Bell’s the One by a half-length in the $300,000 Open Mind.

Following the Open Mind, Lothenbach Stables’ Bell’s the One traveled to Keeneland to compete in the $250,000 Thoroughbred Club of America (Grade II), where she defeated fellow Dream Supreme rival Club Car by a neck. Trainer Neil Pessin opted to not run Bell’s the One in last Saturday’s $1 million Breeders’ Cup Filly and Mare Sprint (GI) in lieu of Saturday’s race. Overall, the classy 5-year-old mare has a record of 10-4-2 in 21 starts with purse earnings of $1,336,825. Three of her 10 lifetime victories occurred at Churchill Downs. She’ll be ridden by her regular pilot Corey Lanerie in the Dream Supreme from post No. 6.

Lloyd Madison Farm’s Sconsin also did not run in the Filly and Mare Sprint. Trained by Greg Foley, Sconsin has been off since her victory over Bell’s the One in the Open Mind. The 4-year-old homebred filly will enter Saturday’s affair with a record of 5-4-1 in 15 starts with earnings of $783,362. Jockey Tyler Gaffalione will have the return mount from post 4.

TV SCHEDULE – Racing from Churchill Downs will air each race day on the Churchill Downs LIVE app. The app is available free of charge on streaming services such as Amazon, Apple TV and Roku. Most races also will be covered on the Fox Sports family of networks as part of “America’s Day at the Races.” Here is the updated TV schedule for racing this week:

PDJF BENEFIT FRIDAY NIGHT AT VFW – A benefit for the Permanently Disabled Jockeys Fund (PDJF) will be held Friday at 6 p.m. at the V.F.W. Post 6182 across the street from Churchill Downs at 992 Longfield Ave. in Louisville. There will be guest jockey bartenders, live music from the Stormin Norman Bluegrass Band, food, 50/50 games and prizes.

FREE CHURCHILL DOWNS CALENDAR ON SATURDAY – A free 2022 Churchill Downs Calendar sponsored by Humana will be given to the first 5,000 guests in attendance on Saturday, Nov. 13. The colorful calendar features major event listings and vivid and memorable images from the Kentucky Derby and around the historic racetrack.

The award recognizes individuals for outstanding contributions to Kentucky racing and sharing the passion exemplified by Jones, who spent 50 years on the Churchill Downs board, including eight as chairman during the iconic track’s resurgence. Warner Jones – the first, and so far only breeder of a Kentucky Derby, Kentucky Oaks and Breeders’ Cup winner – was the inaugural award winner in 1988, six years before his death.

Steve Asmussen, the 2020 recipient, also will be honor because last year’s event was not able to be staged.

LOUISVILLE THOROUGHBRED SOCIETY TO HOST CHILI ON THE TERRACE SATURDAY NIGHT – The Louisville Thoroughbred Society in downtown Louisville will host “Chili on the Terrace” on Saturday from 6-11 p.m. The event will be held in memory of the late jockey Miguel Mena.

The Louisville Thoroughbred Society, a premier, private club with pari-mutuel betting machines, invites all trainers and jockeys and their families and friends to the event after the races at 209 E. Main St. No ticket is required. A complementary bowl of chili is included.

In additional to wagering, the Louisville Thoroughbred Society features a cigar humidor and lounge, a whiskey bar with rare bourbons, scotches and whiskeys and a rooftop fire pit for enjoyment.

For additional information, visit thelouisvillethoroughbredsociety.com or call the club at (502) 416-1282.

DOWN THE STRETCH – Racing continued Wednesday at Churchill Downs with a first post of 1 p.m. There was a $64,590 carryover in the 20-cent Derby City 6 in Races 5-10. … Breeders’ Cup Classic (GI) winner Knicks Go returned to Churchill Downs at 11 p.m. Tuesday. Trainer Brad Cox reported Knicks Go could remain in training and point toward the Pegasus World Cup (GI) on Jan. 29 as his final start. … Joel Rosario, who rode Knicks Go to victory in the Classic and leads the nation in earnings with $30,763,407 in earnings, will ride at Churchill Downs through the remainder of the Fall Meet. Rosario has won 68 stakes races this year and is in pursuit of the late Garrett Gomez’s 2007 all-time mark of 76. Rosario has won 48 graded stakes, and the all-time mark in held by Jerry Bailey, which was 55 in 2003. Amazingly, Ron Anderson is the jockey agent for Rosario and represented Bailey and Gomez during their historic campaigns. … Jockey Corey Lanerie will serve a three-day suspension Wednesday-Friday. He’s scheduled to ride Saturday. … Multiple Grade I winner and 2020 Longines Kentucky Oaks (GI) heroine Shedaresthedevil sold for $5 million Tuesday at the Fasig-Tipton November Sale and will remain in training with Cox through the partnership of Mandy Pope’s Whisper Hill Farm along with part of her former ownership team of Qatar Racing and Flurry Racing Stables. … First Responders Day with free admission or a discounted $29 ticket to Millionaires Row for active first responders is Sunday. … For more information about the Fall Meet, visit www.churchilldowns.com.

Churchill Downs Racetrack (“CDRT”), the world’s most legendary racetrack, has been the home of The Kentucky Derby, the longest continually held annual sporting event in the United States, since 1875. Located in Louisville, CDRT features a series of themed race days during Derby Week, including the Kentucky Oaks, and conducts Thoroughbred horse racing during three race meets in the Spring, September, and the Fall. CDRT is located on 175 acres and has a one-mile dirt track, a 7/8-mile turf track, a stabling area, and provides seating for approximately 60,000 guests. The saddling paddock and the stable area has barns sufficient to accommodate 1,400 horses and a 114-room dormitory for backstretch personnel. CDRT also has a year-round simulcast wagering facility. www.ChurchillDowns.com. 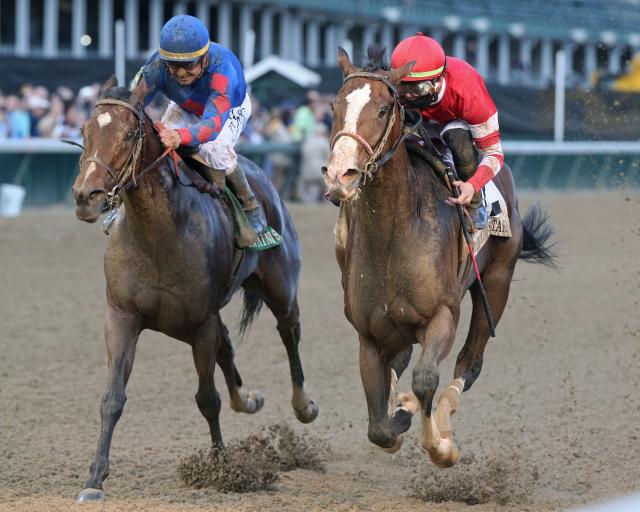