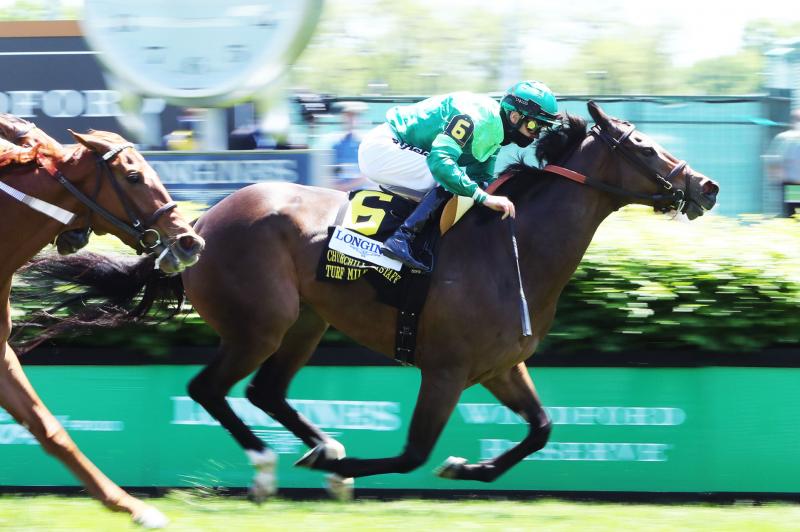 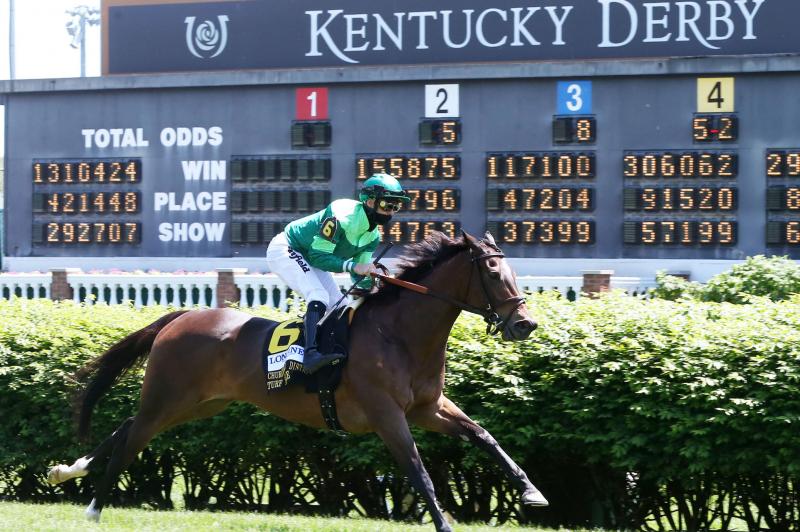 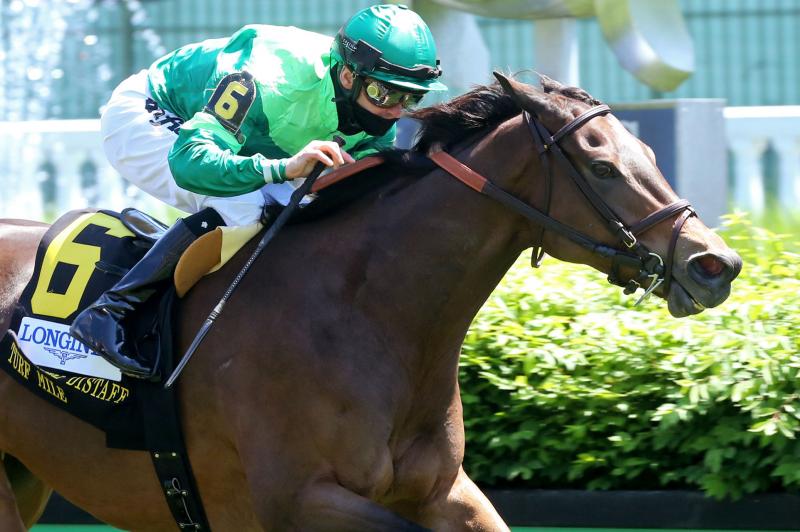 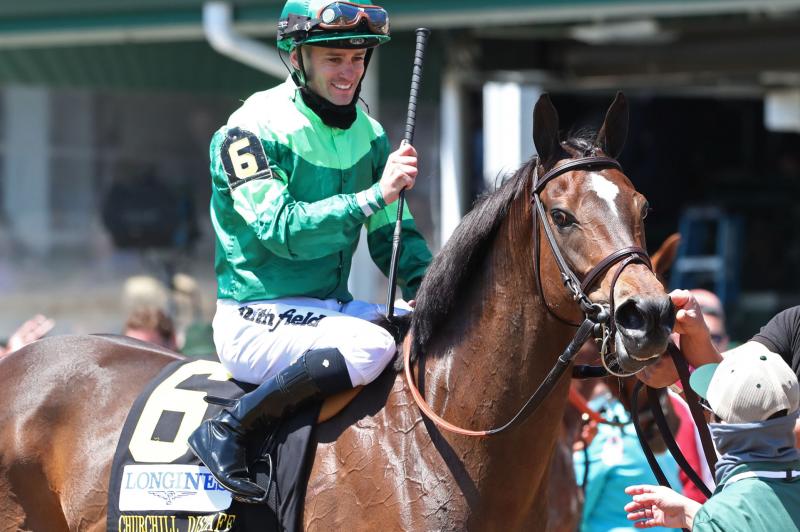 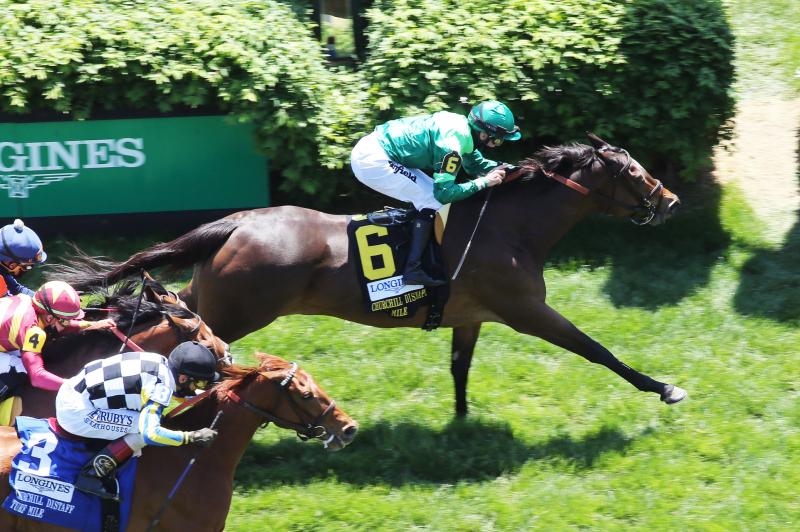 LOUISVILLE, KY (Saturday, May 1, 2021) – Peter Brant’s Blowout (GB) built a huge early lead and then held off a host of challengers in deep stretch by a half-length to win the 36th running of the $500,000 Longines Churchill Distaff Turf Mile (GII) for fillies and mares.

Trained by Chad Brown and ridden by Flavien Prat, Blowout covered the mile on a firm Matt Winn Turf Course in 1:36.30. It is the second win in the race for Brown who had scored with Roca Rojo (IRE) in 2017.

Blowout, who had been caught at the wire in her past three starts, raced out to a huge advantage early as she led the field through fractions of :24.28, :48.39 and 1:12.99. Blowout maintained a daylight margin in the stretch, a margin that diminished as the wire approached but never disappeared as Blowout held on to record her first graded stakes victory.

Abscond finished another nose back in fourth and was followed in order by Got Stormy and She’s Got You (GB).

Flavien Prat (Jockey, Blowout, winner) – “She was running so easy up front and I thought the times were not that fast, so I was very happy. Then when we came to the eighth pole, they all came after me and it looked like they might go by. But when she saw them, she regrouped and fired up again and we won it.

Chad Brown (Trainer, Blowout, winner) – “She has a tendency to wait on horses and we preferred to have a target but when the 1 scratched she found herself on the lead. I thought Flavien did an excellent job settling her down, as you can see, she can be a little difficult to handle. I thought once they turned for home they were going to close in again and she was going to wait for horses but he said when she had the horses behind her, she kicked in again, thankfully. It's very rare for me (to have a horse build a big lead), as you know a lot of my horses come from off the pace but we learned with this horse to let her do her thing and that's where she wants to be. Mr. Brant was really determined to get a Grade 1 with her, it's a wonderful family; he owns the mother. She was so close in the Matriarch and she did what Blowout does when she makes the lead, she waits on horses. A lot of her defeats are not due to fatigue it's that she likes to wait on horses. She can be difficult; she wants to be forward, and she pulls, but she's actually better with a target. And it's hard to find two-turn races for her with a target because she's so fast. She had it momentarily in the Matriarch but when she surged to the lead, she lost it and waited. I thought that might happen today turning for home; as easy as the fractions were for her, :48, you'd think she'd be gone, and sure enough they closed in on her because she will wait for horses. I thought they'd (the others) be a little closer than that. I was surprised with how far in front she was at one point. But guided by the fractions, looking at it, from a stamina point there was no issue. At that point it was mental. She'll be heading to the Just a Game at Belmont next."

John Velazquez (Jockey, New York Girl, runner-up) – “There wasn’t a lot of speed in there. That didn’t help me at all. She really closed like a really good horse, but I didn’t have the pace in front of me. That hurt us bad. Still, she ran great.” 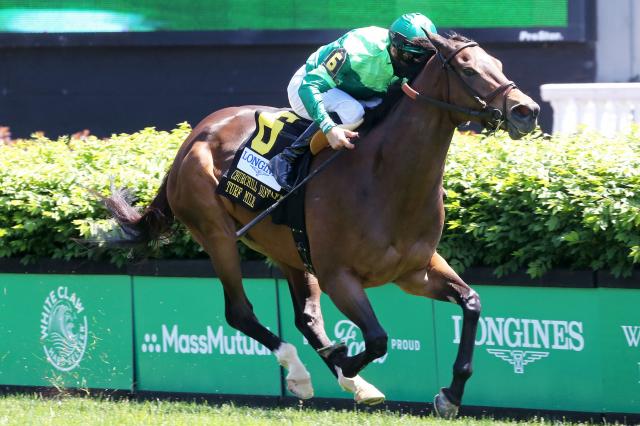