Trained by Ignacio Correas and ridden by Julien Leparoux, Blue Prize covered the 1 1/16 miles on a fast main track in 1:43.69 for owners John Moores and Charles Noell’s Merribelle Stable LLC.

Streamline set the pace from the inside and led the field of nine through comfortable early fractions of :24.53 and :48.96 with Blue Prize pressing from second and Champagne Problems tracking in third. Blue Prize took the lead on the far turn but was quickly met by a determined Champagne Problems from the outside at the head of the stretch. The two clashed throughout the stretch but Blue Prize, who raced down on the inside, narrowly prevailed in the long drive to the wire.

The victory was worth $59,520 to Blue Prize and increased her earnings to $664,753 with a record of 6-7-1 from 15 starts. She is now has three wins and two second from five starts at Churchill Downs. Blue Prize also was victorious in last fall’s Falls City Handicap (GII) on Thanksgiving Day.

Julien Leparoux, jockey of BLUE PRIZE (ARG) (winner): “This was the first time I’ve been on this horse in the afternoon but she was relaxed and moving very easily the entire time. I breezed her about a month ago at Keeneland. She’s a very classy horse.”

Ignacio Correas IV, trainer of BLUE PRIZE (ARG) (winner): “She’s not used to running up close to the pace as she did today. There really wasn’t that much pace in the race but we know one thing is for sure – she loves this track. She’s done so well in all of her starts here and it’s great the Breeders’ Cup is here. We’re going and we’re excited.”

Calvin Borel, jockey of CHAMPAGNE PROBLEMS (runner-up): “She tried very hard. We were so close – we almost got there. She’s really started to get better and better each start. Ian has done a great job with her.”

Brodie Wilkes, assistant trainer of CHAMPAGNE PROBLEMS (runner-up): “What a great race. You can’t ask for a better stretch battle in horse racing than that. We’re very proud of her. She ran great.”

Brendan Walsh, trainer of MANNERLY (third): “Well, we got some graded black type in her pedigree. She ran a good effort.” 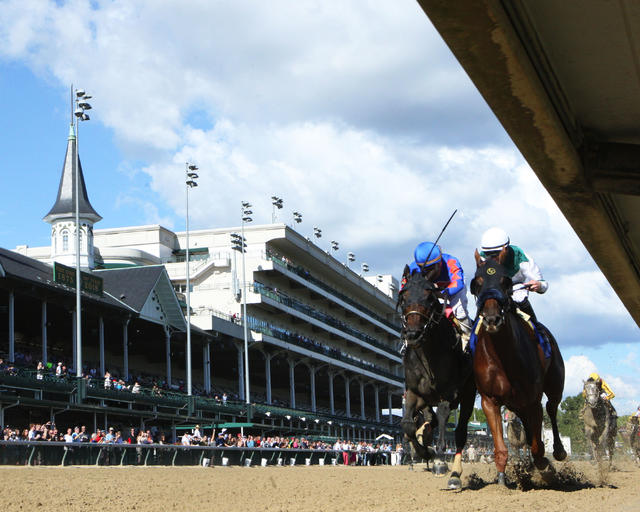