Bradley Happy With The Player's Big Win for Family-Owned Farm 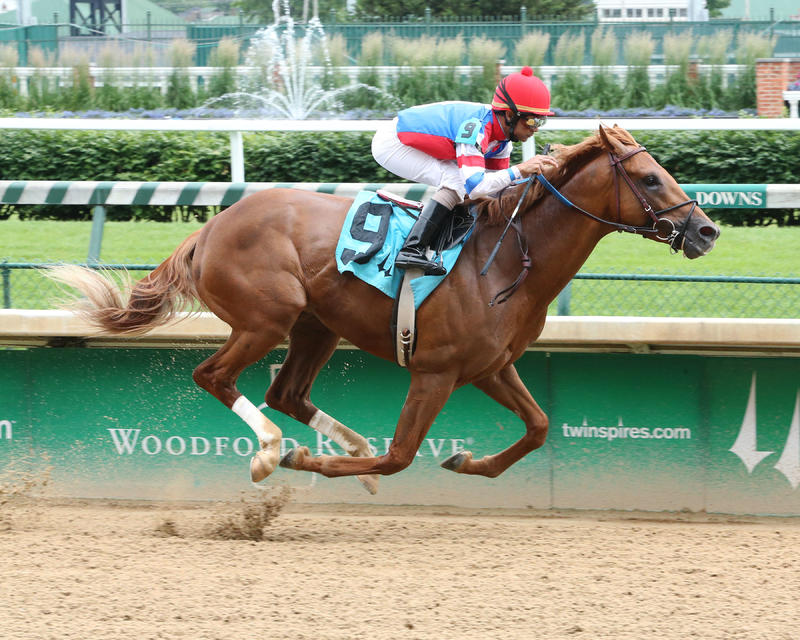 The Player collected his second consecutive impressive victory of the Spring Meet in winning a first-level allowance race on Friday for trainer Buff Bradley, who co-owns the son of Street Hero with Carl Hurst. (Coady Photography | Churchill Downs) 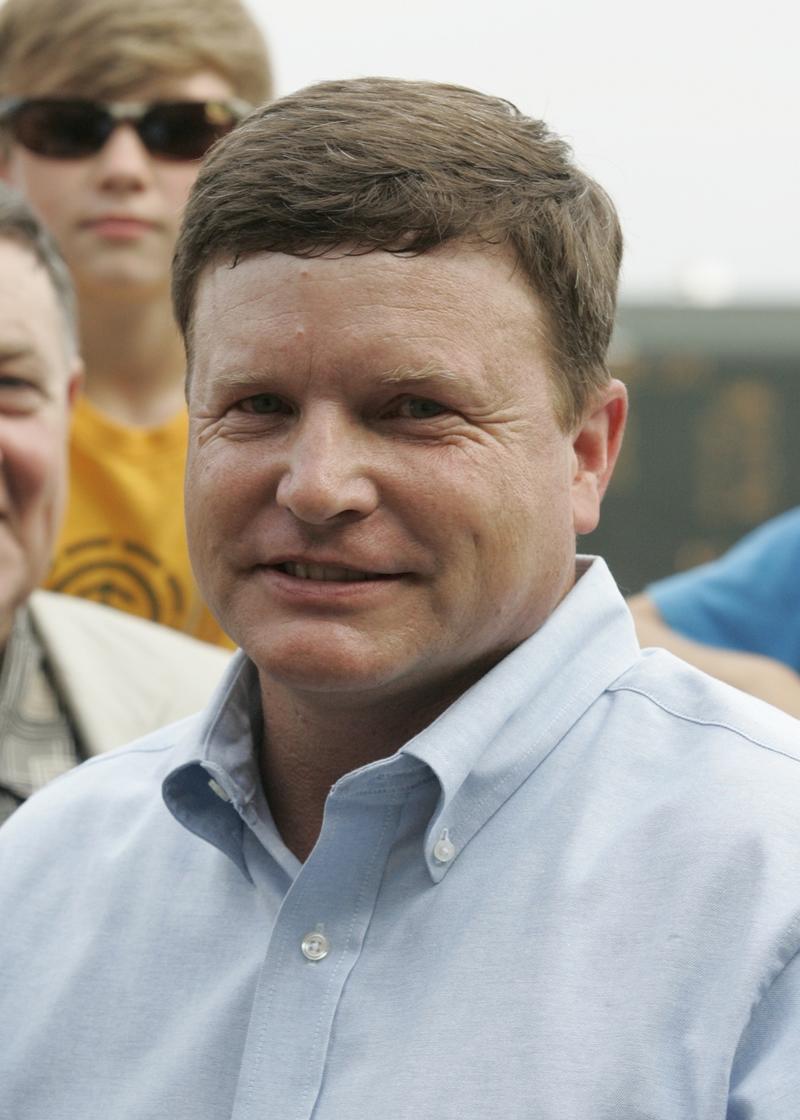 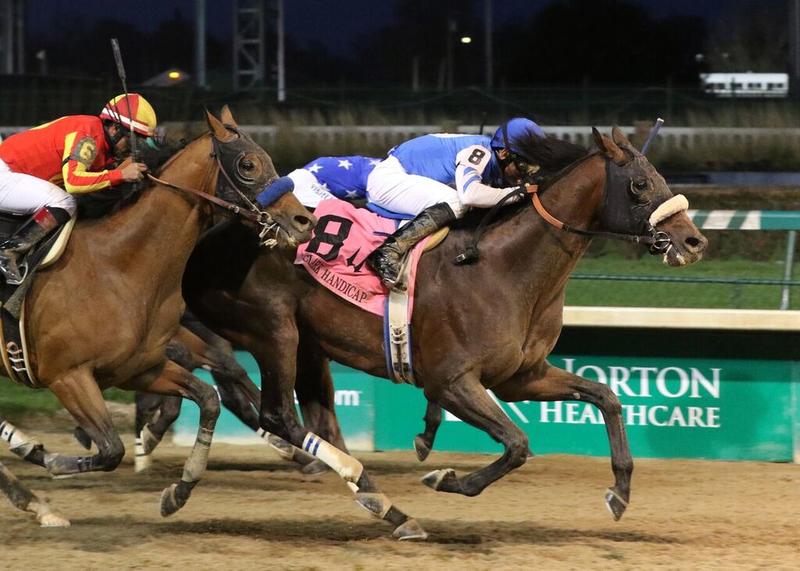 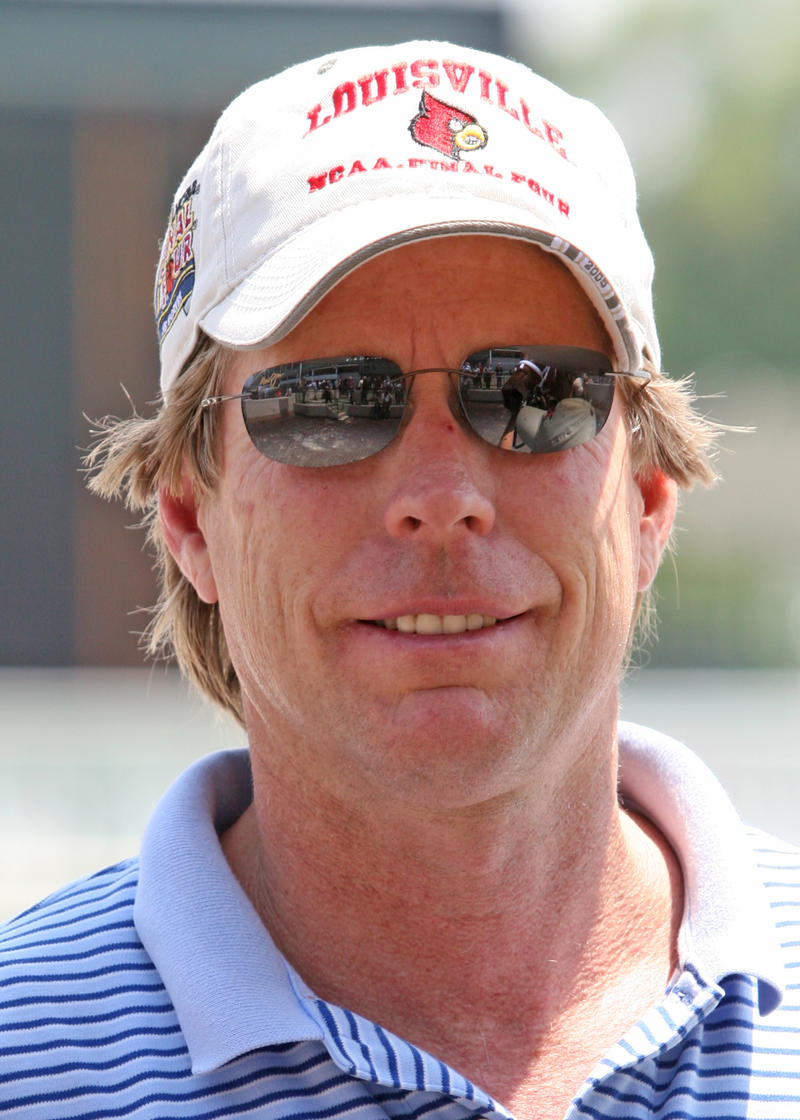 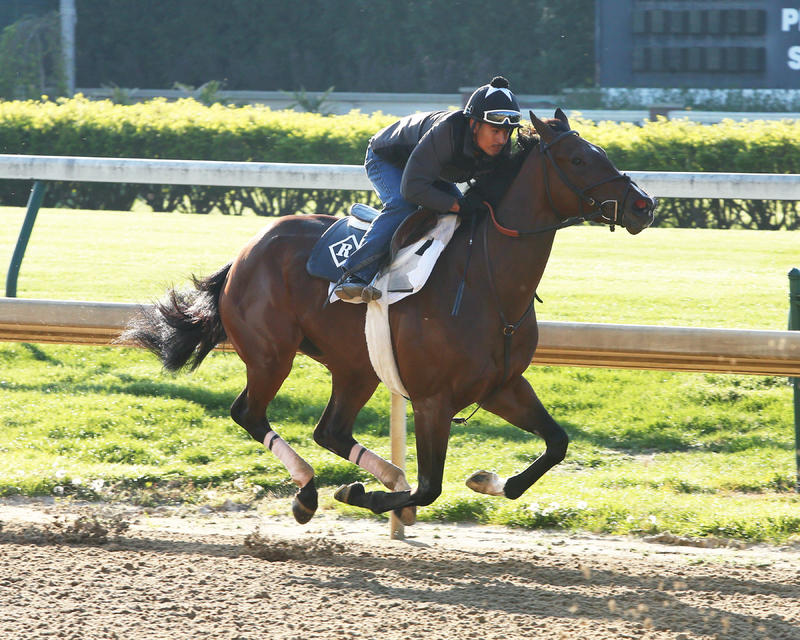 Trainer William “Buff” Bradley will be saddling Woodford Reserve Turf Classic (Grade I) winner Divisidero in next Saturday’s $1.5 million Manhattan (GI) on the Belmont Stakes undercard, but a big victory with The Player in Friday afternoon’s seventh race at Churchill Downs has given Bradley even more to look forward to.

Owned and bred by Bradley in partnership with Carl Hurst, the 3-year-old son of Street Hero comes from family lines that Bradley is quite familiar with. He is out of the broodmare Hour Queen, whose mother was Bradley’s first stakes winner.

“Most of my big horses are in this pedigree,” Bradley said. “I bought Town Queen’s mother (Regal Export) for $20,000 and she produced King of Speed, Town Queen, and Chief Export which were all black-type horses. If he moves on, this will be the biggest horse that we have had out of this pedigree. We always thought that this would be our big pedigree and then we had Brass Hat out of a different one and then Groupie Doll out of another different one, so we’re kind of glad to see this horse come along and that’s why we kept the mare. This family matures late, you don’t see them really start coming around until they’re about 4 years old. I think he’s got great conformation, he’s sound and he could really improve.”

The Player finished fourth in his career debut and went up against stiff competition. Familiar faces to come out of the race include its eventual winner Tom’s Ready, who finished 12th in the Kentucky Derby Presented by Yum! Brands (GI), graded stakes-placed Forevamo who was second, and Preakness runner-up Cherry Wine, who ran fifth.

“There were some good horses that came out of that race,” Bradley said. “Forevamo was in the race, Cherry Wine was in the race and we beat him. We knew he could run last year and his first time out he didn’t break well. He always broke well, but he didn’t that day so he was kind of rushed up there and he showed some promise in that race. The next day we noticed he had a chip in his knee so we took him out and gave him the winter off. We took him to Tampa to train for a while and then we came back here. He ran second at Keeneland in his first start this year and ran a remarkable race there.”

Following Friday’s big performance, Bradley was met with positive comments from some of his competition.

“What made me feel good was after the race, Corey Lanerie (the jockey on runner-up Unbridled Outlaw) came up to me before The Player even walked in the winner’s circle and said, ‘Buff I ran right up to him and your horse just hit the next gear. I thought I was going to go by him and your horse went on.’ So he’s a very nice horse and I’ve got other jockeys complimenting me before I even got to the winner’s circle which was good.

"It makes you feel good to know that they’re watching and they know I’ve got another good horse. I was getting texts after the race and people were saying, ‘Oh wow, another good horse off the Bradley farm,’ and that makes you feel good with one that you raised. I love winning with the other horses but it’s nice that you have those kind that you know have potential from Day One.”

The Player was nicknamed “Angus” as a foal, a name given to him by Haygard Equine Medical Institute’s Dr. Nathan Slovis after the rock band AC/DC’s lead guitarist Angus Young.

“We always give our horses a barn name at the farm,” Bradley said. “He was over at the clinic after he was born for something – it was nothing serious but enough that he needed to go over there – but Dr. Slovis said, ‘Man he’s a rock star,’ so my wife Kim just started calling him Angus.”

Having been around The Player since he was born, Bradley had quite a few interesting stories to tell about the horse.

“He’s quite a character,” Bradley said. “When he was a yearling, I remember one morning I was mowing the field with the bush hog and his two buddies were standing over in the corner away from me and he’s chasing me. I’m having to call Kim and Kelly, my wife and a person who works on the farm, and I said, ‘You got to get me out of this paddock. He’s going to try and climb up into this tractor with me.’ He was just always a really cool horse. He’s not just a race horse, he’s a barn favorite too.

“My kids would be with him in the stall. He wasn’t two weeks old yet and my kids would just be sitting on him while he’s lying down and he just didn’t care. He was just really cool. He wasn’t here at the barn for two weeks and my son Drew came and said, ‘I want to walk him,’ and he had been really good, but the horse knows my son real well since Drew grew up with him. He would always lead him out to the paddock, and Angus would always try to play with Drew when he was feeding him. When Drew was walking him the horse tried to climb on top of him and play with him right here in the shed row and Drew was right underneath him and the horse didn’t even move. He was just playing around, he’s not a mean horse. I could tell you a hundred stories about him.”

The Player made Bradley proud with his win on Friday and will have a chance to make his trainer even more proud when he steps up against tougher company next time out in the $500,000 Indiana Derby (GII) at Indiana Grand Race Course on July 16.

“I said that if this horse can win this race then we’ll go to the Indiana Derby,” Bradley said. “I felt like he’s that type of horse. He’s a nice, big, good looking horse and he’s got the right demeanor. He knows how to relax and he knows how to take everything in. He’s had personality from Day One.”

“Our Churchill Downs family joins our community, the nation and the world in mourning the passing of Muhammad Ali. The Louisville-born, three-time heavyweight boxing champion, American legend and humanitarian was no stranger to Churchill Downs. Early in his career, he jogged over our one-mile dirt track to build fitness, and he later visited our track to attend the Kentucky Derby. Our Churchill Downs family sends thoughts and prayers to the champion’s family and friends here in Louisville and around the world. In his honor, please observe a moment of silence for our hometown icon – the Greatest of All Time, Muhammad Ali.”

In addition to Effinex, the Foster is expected to attract the top two finishers from the Alysheba (GII) on Kentucky Oaks Day: four-time graded stakes winner Majestic Harbor and Grade III winner Eagle.

A complete list of Stephen Foster Handicap Night stakes nominations can be found online at https://www.churchilldowns.com/horsemen/stakes/nominations/.

STEWART-TRAINED PAIR CONFIRMED FOR BELMONT; FOREVER UNBRIDLED BREEZES FOR PHIPPS – Trainer Dallas Stewart confirmed that his pair of recent maiden winners, Seeking the Soul and Forever d’Oro, are set to compete in the $1.5 million Belmont Stakes (Grade I) on June 11 following their maiden victories on May 29.

Both owned by Charles Fipke, Seeking the Soul will be ridden by jockey Florent Geroux and will ship to the New York oval on Tuesday morning. Forever d’Oro, who is already stabled at Belmont Park, will be piloted by Jose Ortiz.

“They’re both real nice horses,” Stewart said. “They’re bred for the distance so they’ve got the breeding that will take them both a mile-and-a-half. It will be a tough race, though.”

On the Belmont Stakes undercard, Stewart will saddle Forever Unbridled in the $1.25 million Ogden Phipps (GI), who put in her final breeze for the race over the Churchill Downs main track Saturday morning. She went five furlongs in :59, recording fractions of :12.40, :35.60 and :47.40 before galloping out six furlongs in 1:13.20 under exercise rider Emerson Chavez.

She breezed great,” Stewart said. “She looked good, came back good and healthy so she’s all set and ready to go.”

Also on the Belmont undercard for Stewart is Tom’s Ready, who was 12th in the Kentucky Derby Presented by Yum! Brands (GI) last time out. He goes in the $500,000 Woody Stephens (GII).

LEPAROUX LOOKING FORWARD TO ROYAL ASCOT OPPORTUNITY – A leading rider in North America for the past decade, jockey Julien Leparoux will be given the chance of a lifetime to achieve major success overseas when he rides Champion Turf Female Tepin in the Queen Anne (Group I) at England’s Royal Ascot.

“It’s always been a dream, watching the races there to even go there,” Leparoux said. “It’s fun just to have the opportunity to ride in a race there, but I think I have a good chance going there with a good horse. The filly is doing well and we’ll see what happens. It’s very exciting. She still has to prove herself, so we’re going to go there and have some brand new thing to go over the straightaway going a mile uphill at the end. It’s something that I don’t think will be a problem, but it’s still an obstacle that we’ll have to go through.”

Highlighted by a triumph over the boys in the Breeders’ Cup Mile (GI) at Keeneland, Leparoux has been aboard the daughter of Bernstein for her last 11 outings, nine of which resulted in trips to the winner’s circle.

“She relaxes a lot more than she used to,” Leparoux said “I believe that since she goes out an wins so easily every time our confidence level is that much higher. I think she has a lot more confidence. Winning over there would mean a lot, it would be a dream come true and especially since we’re presenting American racing over there. Wesley Ward showed all Americans that we can go over there and compete so it would be nice to go there and win that big race.”

Leparoux will arrive in London on Sunday afternoon

“I’ve never been to London so I’ll probably go downtown and check everything out,” Leparoux said “We come back here early Wednesday morning so I probably won’t get to do much sightseeing but I’m definitely going to make the most of it.”

"She breezed terrific,” Fox said. “Everything went really well. She did it nice and easy, she’s very calm.”

DOWN THE STRETCH – Known probable starters for the $100,000 Old Forester Mint Julep Handicap (GIII), a 1 1/16-mile grass event for fillies and mares on Saturday, June 11, according to Churchill Downs stakes coordinator Dan Bork: Cash Control, Flying Tipat, Josdesanimaux, Kiss Moon, Lady Fog Horn, Personal Diary, Sweet Acclaim and Zipessa. … The “Who’s the Champ? Handicapping Contest” returns Sunday. Interested participants can enter for $35 ($30 for TSC Elite members) for a chance to win the $1,000 cash voucher first prize by placing mythical $2 win and place bets on Races 3-8. Second place receives a $500 voucher and third place is worth a $200 voucher. Registration takes place between 11:30 a.m. and 1:30 p.m. on the Clubhouse second floor at the top of the Gate 17 escalators. 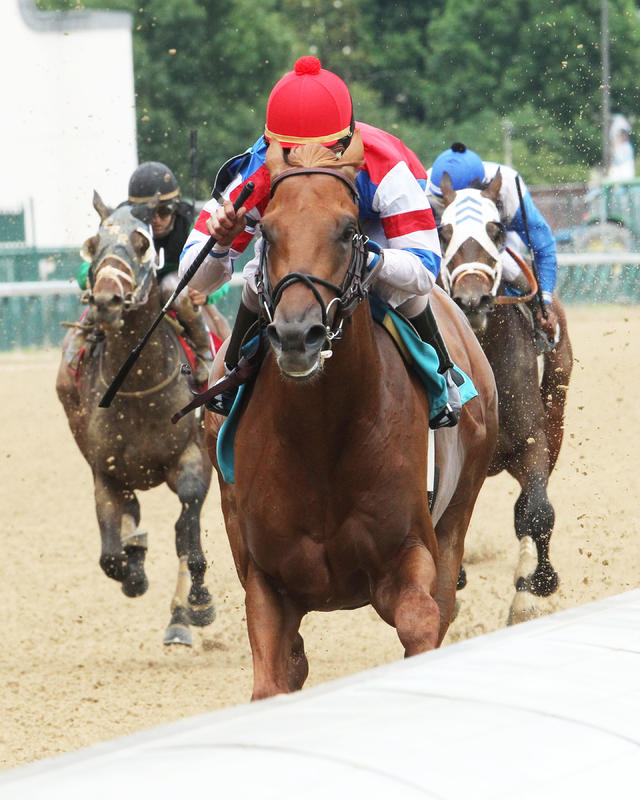