Hall of Fame jockey Javier Castellano did not have much time to celebrate his 5,000th-career win on Saturday at Belmont Park before catching a plane to Louisville to work Robert LaPenta, Madaket Stables, Siena Farm and Twin Creeks Racing Stables’ Breeders’ Cup Classic (GI) contender Catholic Boy five furlongs in 1:02.60 at 5:30 a.m. (all times Eastern) Sunday at Churchill Downs.

“It’s really amazing to think how much riders truly mean to a work,” trainer Jonathan Thomas said. “Javier is great and I’m glad we’ve got him.”

Castellano and Catholic Boy broke from Thomas’ stable pony at the six-furlong pole and started the five-furlong move through splits of :13.40, :26, :38.20 and :50.60 prior to galloping out six furlongs in 1:15.40 and seven furlongs in 1:28, according to Churchill Downs’ clocker John Nichols.

“I thought everything went really well,” Thomas said. “He broke off kindly from the pony. He started the work slowly but really picked it up from there. It was more of an endurance-building work this morning. He ran two tough races over the summer (in the July 7 Belmont Derby and Aug. 25 Travers) so we didn’t really need anything too speedy. This was probably the most major work prior to the Classic and we’ll likely come back with something easy next weekend.”

Castellano, who is named to ride Catholic Boy in the Classic, nearly echoed Thomas after he returned to Barn 41.

“He broke off really nicely today,” Castellano said. “He feels really good and really galloped out well. He really picked it up well down the lane and galloping out.”

Nearly four hours later, Hall of Fame trainer Bill Mott’s Breeders’ Cup Turf (GI) contender Channel Maker worked a half-mile in :49.20 inside of stablemate Prompt through opening fractions of :12.60 and :24.80. He galloped out five furlongs in 1:03.

“He went well,” Castellano said following the work. “It was a nice, easy breeze.”

Trophy Chaser, a 2-year-old colt by Twirling Candy, was an eye-popping 15 ¾-length winner in his second-career start at Gulfstream Park on Aug. 25 prior to the Oct. 6 Champagne.

One of Trophy Chaser’s likely competitors for the Juvenile is Hall of Fame trainer Steve Asmussen’s Iroquois (GIII) runner-up Tight Ten, who blitzed five furlongs in :59.60 in company with stablemate Wilmington (five furlongs, 1:00.20).

Tight Ten, owned and bred by Winchell Thoroughbreds, started about three lengths back of Wilmington, an 0-for-2 maiden, through opening splits of :12.20 and :35.80 before hitting the wire together and galloping out five furlongs in 1:13.60, according to Nichols.

Rounding out the Sunday work tab was 2014 Breeders’ Cup Classic runner-up Toast of New York, who breezed an easy half-mile in :53.60 for trainer Jamie Osborne.

The now 7-year-old gelding, who was the second-place finisher behind Mind Your Biscuits in the Sept. 29 Lukas Classic (GIII) at Churchill Downs, could target the Breeders’ Cup Classic or the 1 ¾-mile Marathon Stakes (GII) on Friday, Nov. 2, according to Osborne’s assistant Jimmy McCarthy.

“He did really well this morning,” McCarthy said. “We went about 24 seconds for the final two furlongs of the work and I think Toast needed that little blow out.”

Training hours at Churchill Downs will remain 5:30-10 a.m. daily until Saturday when the track will open at 5:15 a.m. There will be turf training available Tuesday from 9:45-10 a.m. and daily beginning Sunday, Oct. 28. For more information, visit: https://bit.ly/2PeXuHY.

BREEDERS’ CUP PRE-ENTRY ANNOUNCEMENT ON WEDNESDAY – Pre-entered fields for the 2018 Breeders’ Cup World Championships will be announced via a live stream on the Breeders’ Cup website, Official Mobile App and Facebook page on Wednesday at 11:30 a.m. ET.

Breeders’ Cup Pre-Entry is the first stage of a two-stage entry payment process for all owners intending to start a horse in a Breeders’ Cup World Championships race. The first payment is due by 12 p.m. ET on Monday. The second payment is due on Monday, Oct. 29 when entries are taken for all 14 Breeders’ Cup races, and post positions will be drawn later that day.

DOWN THE STRETCH – Hall of Fame trainer Bill Mott’s assistant Kenny McCarthy reported Breeders’ Cup Classic (GI) contender Yoshida (JPN) could breeze Monday at Churchill Downs. … Imperial Hint, one of the likely favorites for the TwinSpires Sprint (GI), is expected to arrive at Churchill Downs from Parx on Monday evening and will be stabled in Barn 17, according to Churchill Downs Director of the Stable Area Steve Hargrave. … Trainer Ian Wilkes’ Breeders’ Cup Turf (GI) aspirant Quarteto de Cordas was originally scheduled to work Sunday at Churchill Downs but the breeze was called off due to a loose horse on the track. The colt could breeze Tuesday on the turf, according to Wilkes. 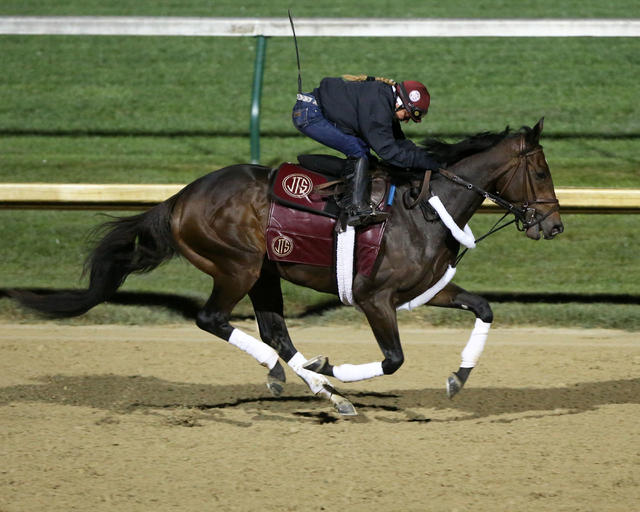