more in every race,” trainer Brad Cox said. “I thought his race in the Travers was a tremendous effort to run down (Midnight Bourbon). He’s a really nice horse in his own right.

“The distance in the Breeders’ Cup Classic (1 ¼ miles) is not going to be an issue for him. He’ll be fit and ready for the Classic. There wasn’t a race in between the Travers and the Classic that made a lot of sense for him to run in. We gave him two easy half-mile works prior to (Saturday) and we’ll keep tightening the screws each week.”

Essential Quality’s stablemate Shedaresthedevil, the winner of the $300,000 Locust Grove (GIII) two weeks ago, recorded her first work back since the 1 1/16-mile event. Her owners reported the multiple Grade I winner will be sold at the Fasig Tipton November Sale following the Breeders’ Cup.

The speedy mare Bell’s the One returned to the work tab following her narrow defeat to Sconsin in the $300,000 Open Mind. Trained by Neil Pessin, Bell’s the One worked in company with recent allowance runner-up Audrey’s Time. With regular rider Corey Lanerie aboard, Bell’s the One started about five lengths behind her stablemate at the half-mile pole and finished even at the wire.

A total of 200 horses recorded published workouts Saturday morning at Churchill Downs. Along with the Breeders’ Cup contenders, Kentucky Derby (GI) fan-favorite Soup and Sandwich has returned to Louisville. Trained by Mark Casse, the Florida Derby (GI) runner-up cruised five furlongs in :59.60. He is scheduled to make his first start since finishing last in the Derby in late October at Keeneland, according to assistant trainer David Carroll.

MILESTONE WATCH – Churchill Downs and North America’s all-time leading trainer Steve Asmussen entered Saturday’s program just one win away from 800 victories beneath the Twin Spires. Asmussen had 10 horses entered across six races Saturday. Trainers Bernie Flint and Dallas Stewart were also on the cusp of Churchill Downs milestone victories Saturday. Flint was one win away from 500 with one entry and Stewart was one away from 300 with four entries.

MEET LEADERS – With two days of racing remaining at the September Meet, jockey Brian Hernandez Jr. led the standings 13 wins to 12 over Tyler Gaffalione. Hernandez had 14 mounts over the final two days while Gaffalione, who rode at Belmont Park Saturday, had eight. … Trainer Kenny McPeek’s seven victories topped the standings followed by Steve Asmussen and Dale Romans who had six wins. … WinStar Farm and Siena Farm continued their lead in the owner standings with three wins from six starters.

The Derby City 6 jackpot pool only is paid if there is a single winning ticket. When multiple tickets contain six winners 90 percent of that day’s pool is paid out and 10 percent is added to the jackpot carryover.

Because Sunday is closing day, there will be a mandatory Derby City 6 payout with all monies distributed to ticket holders with the most winners in the six-race series. Sunday’s Derby City 6, which only costs 20 cents per combination, is scheduled to cover Races 6-11 starting at approximately 3:18 p.m. (all times Eastern).

TV SCHEDULE – Churchill Downs races are scheduled to air this week on “America’s Day at the Races” on the Fox Sports family of networks. Here is the broadcast schedule:

DOWN THE STRETCH – Action on the Road to the Kentucky Derby presented by Woodford Reserve continued Saturday with the Grade I, $500,000 Champagne from Belmont Park. The Top 4 finishers would receive 10-4-2-1 points in their attempt to qualify for a spot in the starting gate on the first Saturday in May. Friday’s $300,000 American Pharoah (GI) was won by Corniche, who did not receive points because trainer Bob Baffert is suspended by Churchill Downs Incorporated from competing in the 2022 Kentucky Derby. Runner-up Pappacap received four points while third-place finisher Oviatt Class garnered two points. The fourth-place runner Rockefeller also is trained by Baffert. … Jockey Miguel Mena will now be represented by Tim Hanisch, who also takes calls for Mitchell Murrill. … For more information about Churchill Downs and to purchase tickets, visit www.churchilldowns.com. 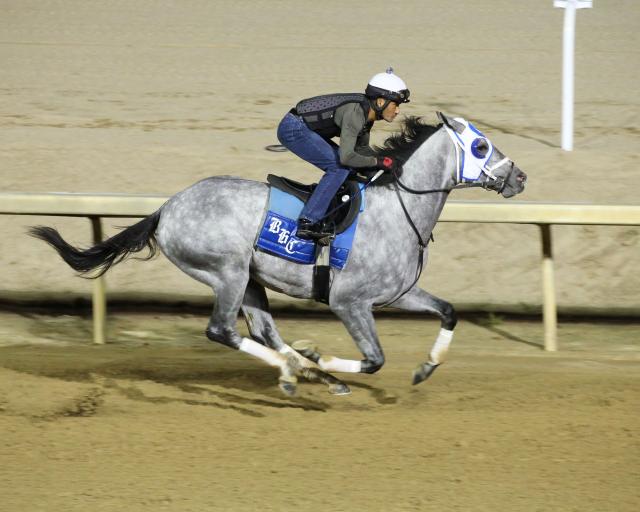