Owned by My Racehorse Stable and Spendthrift Farm, Got Stormy had her final career breeze at 7:30 a.m. (all times Eastern) under jockey Declan Carroll. The duo cruised a half-mile in :48.60. Two hours earlier, Albaugh Family Stables’ Juju’s Map clipped five furlongs in :59.60 with jockey Florent Geroux in the saddle outside of stablemate Matera (five furlongs, :59.80).

Got Stormy, a multiple Grade I-winning mare by Get Stormy, finished second in the 2019 Breeders’ Cup Mile at Santa Anita.

“We had some rain in the area but the track was really good so I decided to move her work up a day,” trainer Mark Casse’s assistant David Carroll said. “Sometimes you see with older mares that they may take a step back from their younger campaigns but she has been doing great. I’m really excited the way she’s coming into the Breeders’ Cup. She’s a very special mare to all of us.”

Got Stormy, along with about 12 other locally-based Breeders’ Cup contenders, will ship to Del Mar on Monday.

Juju’s Map completed her major preparation for the Breeders’ Cup Juvenile Fillies for trainer Brad Cox. A recent winner of the $400,000 Alcibiades (GI) at Keeneland, Juju’s Map is one of six local contenders for Cox.

“Today’s work was with an older horse in Matera,” Cox said. “She’s a stakes winner in her own right so she’s a pretty tough workmate. ‘Juju’ sat just off her and maybe broke about a length behind. She was well in hand throughout the work and it was exactly what we were looking for at this stage. This filly seemed to improve a little bit since her win in the Alcibiades, which is what these horses need to do this time of year leading into the Breeders’ Cup.”

Cox won the 2019 Juvenile Fillies with British Idiom but Geroux will be searching for his first victory in the race.

“She worked a really solid five furlongs and it was a really nice move being a week out from the race,” Geroux said. “She was able to stay relaxed throughout the work, which was important when you’re working in company. She seems to be coming into the race in great shape.”

KISS THE SKY TABBED AS 3-1 MORNING LINE FAVORITE IN $200,000 STREET SENSE, YUUGIRI 2-1 CHOICE IN $200,000 RAGS TO RICHES – Sunday’s “Stars of Tomorrow I” program at Churchill Downs is headlined by the $200,000 Street Sense where Kentucky Downs Juvenile Mile runner-up Kiss the Sky was tabbed as the tepid 3-1 morning line favorite. Impressive maiden winner Yuugiri was made the 2-1 choice in the $200,000 Pocahontas for fillies.

Owned by Paradise Farms Corp., Skychai Racing and David Staudacher, Kiss the Sky broke his maiden on turf at Saratoga and finished just three-quarters of a length behind Breeders’ Cup Juvenile (GI) turf contender Tiz the Bomb in the Juvenile Mile.

In the Rags to Riches, Sekie and Tsunebumi Yoshihara’s 7 ¼-length debut hero Yuugiri will headline the compact field of five 2-year-old fillies. Trained by Rodolphe Brisset, Yuugiri earned a stout 95 Brisnet Speed Rating for her victory at Churchill Downs.

Kids 12 and under are encouraged to wear costumes and trick-or-treat at more than 15 “Trick-or-Treat Boo Stations” throughout the first floor of the racetrack on Halloween as Churchill Downs and community partners hand out candy between 12-4 p.m. Additionally, families are invited to take home a free pumpkin for their Halloween jack-o-lantern from a pumpkin patch at Churchill Downs.

Tickets are $10 for wristbands to participate for ages 3 and up and can be purchased online at www.churchilldowns.com. “Buy Four, Save $4” ticket packages also are available.

DOWN THE STRETCH – Sunday’s Opening Day program at Churchill Downs will begin at 1 p.m. Racing will continue on a Wednesday-Sunday schedule through Nov. 28. … “Inside Churchill Downs” will air Friday at 6 p.m. on ESPN 680/105.7. Fans can listen live online at www.espnlouisville.com. Friday’s broadcast will take a dive into the Breeders’ Cup World Championships along with Churchill Downs’ Opening Day program. … Racing action Sunday will air on “America’s Day at the Races” from 12:30-4 p.m. on FS1 and 4-6 p.m. on FS2. … Opening day weather in Louisville will be mostly sunny with a high near 63, according to a forecast from the National Weather Service. 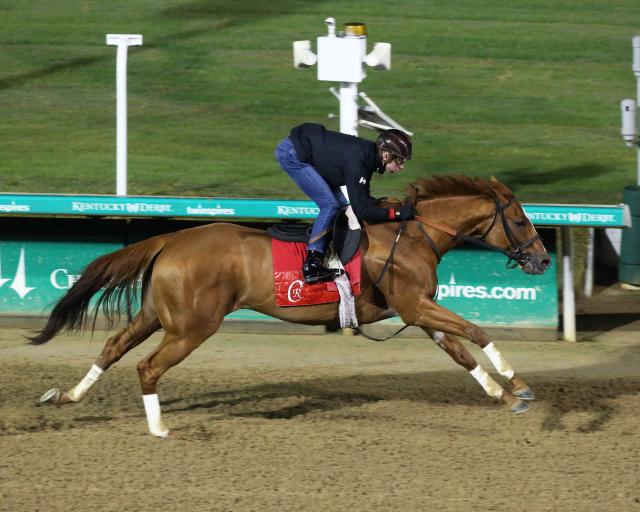