Cypress Creek and Arnold Bennewith’s $2 million Breeders’ Cup Juvenile (Grade I) third-place finisher Keepmeinmind will be in search of his first-career victory against a competitive field of nine 2-year-olds, which includes stakes winners King Fury and Sittin On Go, entered in Saturday’s 94th running of the $200,000 Kentucky Jockey Club (GII).

Diodoro’s go-to rider David Cohen has the mount on Keepmeinmind and will break from post position No. 4.

Another juvenile likely to garner attention in the Kentucky Jockey Club is Fern Circle Stables and Three Chimneys Farm’s $98,000 Street Sense winner King Fury. Trained by Kenny McPeek, King Fury will add blinkers for his start in the Kentucky Jockey Club following his seventh-place effort in the Breeders’ Cup Juvenile. Named after the superstar boxer Tyson Fury, King Fury added blinkers in his most recent work at Churchill Downs, a five-furlong move in 1:00.60.

Brian Hernandez Jr. has the call on King Fury from post 8.

Also entered in the field is Albaugh Family Stable’s coupled entry of $200,000 Iroquois (GIII) upset winner Sittin On Go and recent maiden winner Smiley Sobotka. Trained by Dale Romans, Sittin On Go recorded a shocking 24-1 upset victory in the Iroquois by 2 ½ lengths. In his first try at two turns, Sittin On Go was forced very wide in the Breeders’ Cup Juvenile and finished a non-descript ninth.

Corey Lanerie is named in the program on both horses. Should the bottom part of the entry, Smiley Sobotka, run in the field, there will be a late jockey change. Sittin On Go will break from post 2 while Smiley Sobotka drew post 5.

Trainer Brad Cox entered two of his promising juveniles in the Kentucky Jockey Club. Kueber Racing and Ten Strike Racing’s three-length maiden winner Swill will break from the rail with Florent Geroux in the irons and Godolphin’s two-length maiden winner Inspector Frost drew post 6 with Hall of Famer John Velazquez in the saddle. Swill, a 2-year-old colt by Munnings, was a wire-to-wire winner in his third start on Sept. 24 at Churchill Downs while Inspector Frost broke his maiden at second asking on Oct. 18 at Keeneland under Geroux. This will be both colt’s first start going two turns and they will both remove blinkers for this start.

As a “Prep Season” race on the “Road to the Kentucky Derby,” the Top 4 finishers in the Kentucky Jockey Club will receive 10-4-2-1 points, respectively. 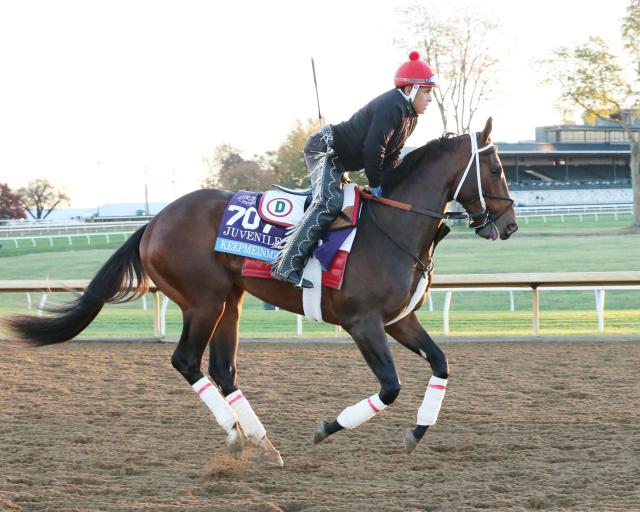