Breeders’ Cup Juvenile Fillies Turf (Grade I) winner Sharing was victorious in her 3-year-old debut when she beat Abscond by a half-length in Saturday’s first running of the $100,000 Tepin presented by Woodford Reserve at Churchill Downs.

Trained by Graham Motion and ridden by Manny Franco, Sharing added the Tepin to her résumé when she ran one mile on firm turf in 1:36.26.

Longshot In Good Spirits dictated the pace through early fractions of :24.16, :48.39 and 1:12.33 with Outburst (GB), Walk In Marrakesh (IRE), Sharing and 8-5 favorite Alms rating just behind. Off the final turn, Sharing swung out four-wide, collared the leader in upper stretch and grabbed the lead with a furlong to run. Abscond and Pass the Plate rallied late to grab second and third, respectively, from In Good Spirits, who finished fourth.

Alms lacked any punch down the stretch and finished fifth. Dominga, Walk In Marrakesh (IRE), Moral Reasoning, Jezebel’s Kitten, Queen of God, Outburst (GB), Eve of War and Oxium Power completed the order of finish. Hendy Woods and Heir of Light were scratched.

The victory was worth $57,040 and increased Sharing’s earnings to $787,340 with a record of 4-1-0 in five starts for Aron Wellman’s Eclipse Thoroughbred Partners and Antony Beck’s Gainesway Stable.

“It’s great seeing her back to her form from last year,” Franco said. “She’s very classy but it makes your job easier when you have nice horses underneath you.”

Bred in Maryland by Kevin Plank’s Sagamore Farm, Sharing is a well-bred daughter of Speightstown out of the Pleasantly Perfect mare Shared Account, who won the 2010 Breeders’ Cup Filly & Mare Turf (GI) at Churchill Downs.

The Tepin, named after the brilliant two-time Eclipse Award-winning turf mare in 2015-16, served as a prep to the 51st

JOCKEY MANNY FRANCO ON SHARING (winner): “It’s great seeing her back to her form from last year. She’s very classy but it makes your job easier when you have nice horses underneath you.”

JOCKEY TYLER GAFFALIONE ON ABSCOND (second): “She really got to striding out up the backside. She ran a big race and closed really strong.” 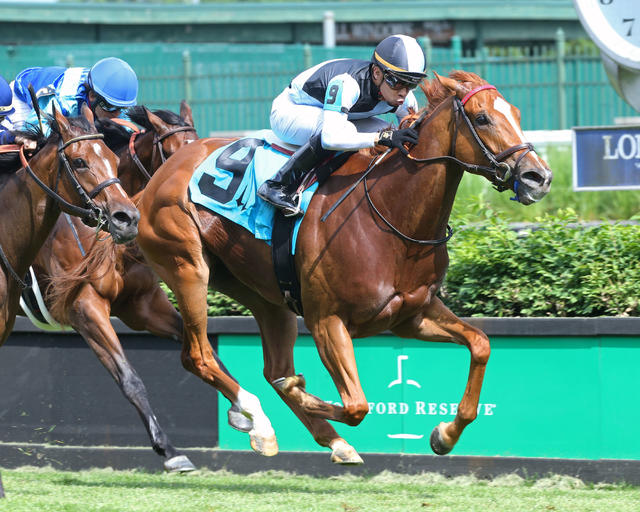