Breaking from post position No. 5 in the field of 11, Twilight Gleaming (IRE) went to her knees when the gates opened but only lost a length to her rivals and rapidly went to the front – her customary running style. Racing from the two-path into the turn, she clocked the first quarter mile in :22.35 had a one length advantage over Artos (IRE), who was chasing just off Twilight Gleaming (IRE)’s right hip. She opened up a 1 ½-length advantage at the top of the stretch and then, after a half-mile in :45.88, desperately held off a rallying Devine Charger and Artos (IRE), who were separated for the place by a scant nose.

The Mamzelle was her second start of the year. She made her 3-year-old debut last month in the $200,000 Palisades at Keeneland where she was narrowly defeated as the 4-5 favorite by Slipstream. As a 2-year-old she placed in the Group 2 Queen Mary at Royal Ascot before winning the Prix de la Vallee d’Auge at Deauville and $1 million Breeders’ Cup Juvenile Turf Sprint (GII) against males at Del Mar.

“We’ll talk things over but I’d say sending her back to Royal Ascot would be a logical next step,” Ward said.

Twilight Gleaming (IRE) is a daughter of National Defense (GB) out of the Dansili (GB) mare Thames Pageant (GB) and was bred in Ireland by Pier House Stud.

Tyler Gaffalione (jockey, Twilight Gleaming, winner) – “We got away just a step slow. She got to the front pretty easily after that and I had to ask her a bit mid-stretch but she responded well. I worked her the other week and she got over the course well so I had confidence she’d run well tonight.”

Wesley Ward (trainer, Twilight Gleaming, winner) – “Tyler (Gaffalione) said she stumbled a little bit going out of the gate but she was able to establish things on the front end. The Palisades was her first race without blinkers but I thought she was able to relax better without them. We’ll talk things over but I’d say sending her back to Royal Ascot would be a logical next step.” 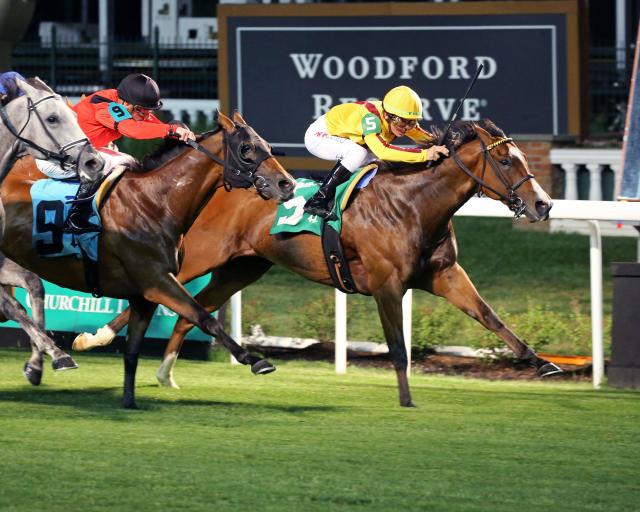