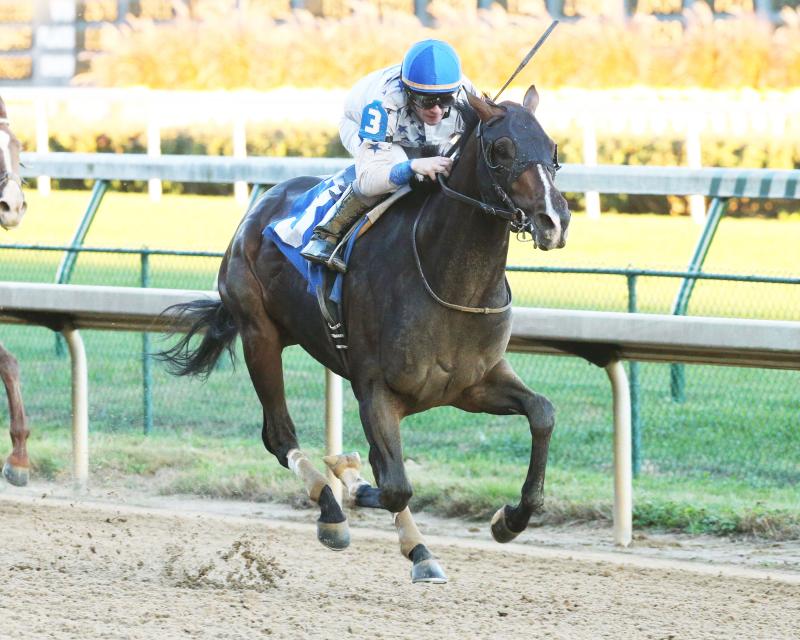 Chuck and Maribeth Sandford's Just Move On comes into the Kentucky Jockey Club off a victory in a strong Churchill Downs allowance race on Nov. 10. (Coady Photography, Churchill Downs) 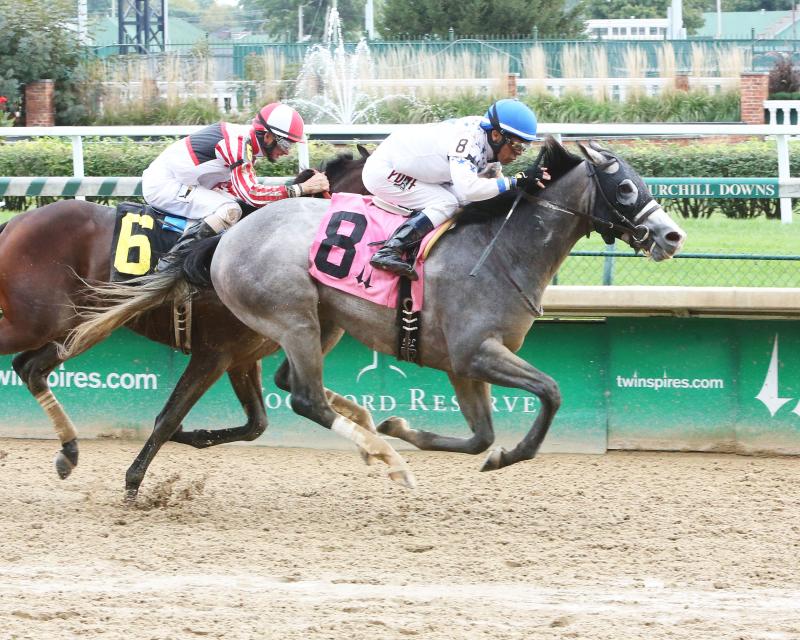 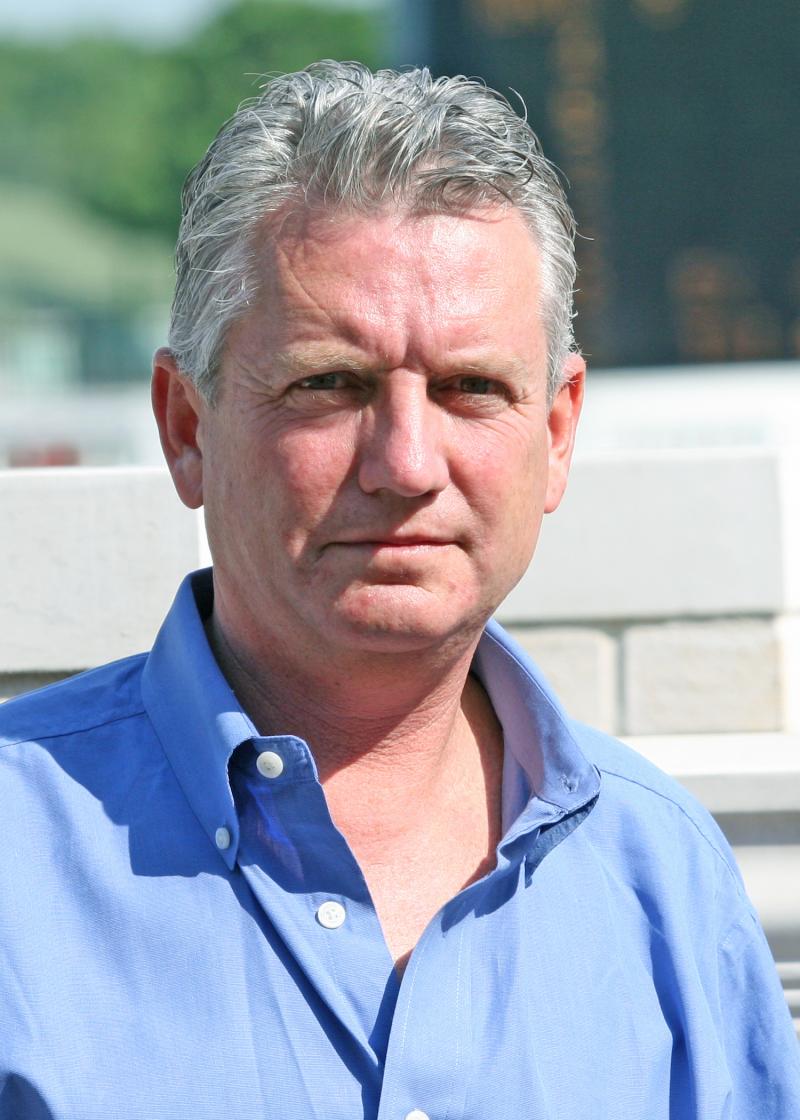 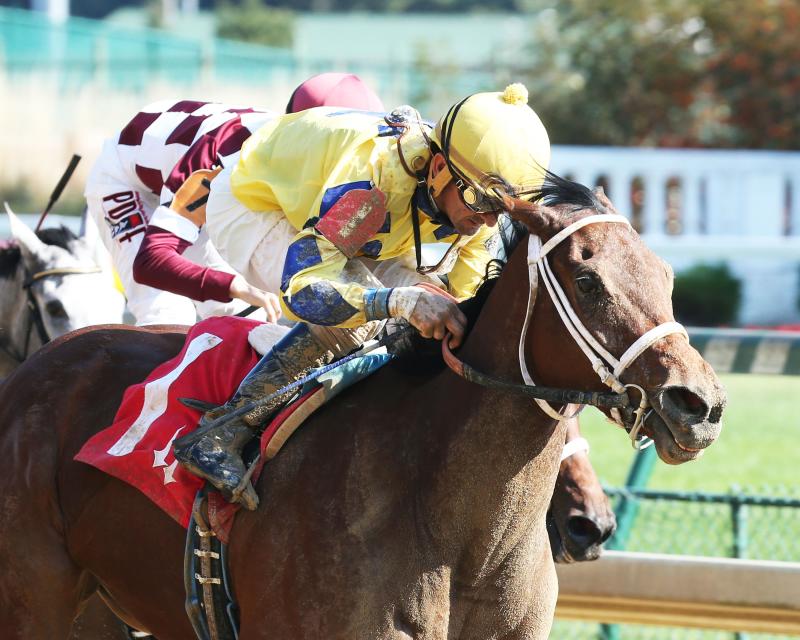 Trainer Pat Byrne has high hopes for his pair of 2-year-old colts, Just Move On and Silent Decree, for Saturday’s 90th running of the $200,000 Kentucky Jockey Club (Grade II), the featured event on Churchill Downs’ ‘Stars of Tomorrow II’ program.

Both colts are owned by Chuck and Maribeth Sandford and will enter the Fall Meet’s premier event for 2-year-olds off of efforts over the Churchill Downs main track. Just Move On won a first-level allowance event over the main track last time out on Nov. 10, while Silent Decree was fourth in the Oct. 30 Street Sense Overnight Stakes in his last start. Both horses also enter Saturday’s race off of bullet workouts. Silent Decree breezed five furlongs in :59.20 on Nov. 18 while stablemate Just Move On breezed three furlongs in :36 three days later.

"They’re both good, solid, hickory colts,” Byrne said. “They both come into this race off nice bullets. It looks like it’s a pretty interesting race on paper. We’re lucky because we don’t have to be here in this position. Sometimes these horses can get hurt but we have two sound ones and here we are. I’m looking forward to watching them both run. I don’t think that there’s much pressure on my colts. I think the pressure appears to be on (trainer) Ian’s (Wilkes) horse (McCraken), but I like their chances and I thought they drew well. I’m in the middle and I like that.”

Byrne noted that the 16-day layoff is somewhat of a concern for Just Move On.

“I’m just a little concerned about how he’ll come back in such a short amount of time but you don’t know until you see,” Byrne said. “It’s better than 14 days like they do for the Derby and Preakness.”

Silent Decree was a bit fractious in the starting gate in his last start, which Byrne believes may have cost him a better effort.

“He was standing real well (in the gate), and then (jockey Jose Valdivia Jr.) told me that day that he was kind of looking off the right and when the gates opened up, he lost position and he was wide,” Byrne said. “He got four weeks, he came back and worked :59, nothing wrong with that. They’re very sound horses so I can breeze them and stick to some kind of regimen with them. They’re ready to go. I got no excuses, just a little concerned about the 16 days with (Just Move On) but he can overcome it.”

Declan Cannon, who guided Just Move On to his allowance victory earlier in the month, will retain the mount aboard the horse. Florent Geroux will ride Silent Decree.

LOVELY BERNADETTE GOES FOR FOUR IN A ROW IN SATURDAY’S GOLDEN ROD – James Miller’s Lovely Bernadette enters Saturday’s $200,000 Golden Rod (GII) with a three-race win streak that she will put on the line against 11 other 2-year-old fillies in the 1 1/16-mile event at Churchill Downs.

The homebred daughter of Bernardini started her hot streak when she broke her maiden over the Churchill main track on Sept. 17 which she followed up with a 6 ½-furlong allowance win at Keeneland. Most recently, she took the Oct. 30 Rags To Riches Overnight Stakes.

"It’s pretty nice to have a horse like this, there’s no doubt about that,” trainer Jimmy DiVito said by phone. “She’s shown that she can run from the beginning so were hopefully going to be lucky to keep her going, keep her sound and have a nice horse.”

Lovely Bernadette will travel two turns for the first time in the Golden Rod, where she will break from the outside in the 12-hole.

“It’ll be no problem since she’s a pretty versatile filly,” DiVito said. “She can lay close to the pace right there in behind horses or she can sit well off of it. I think that she’s versatile enough to where she can wrap around and not lose so much ground so the post she drew isn’t much of an issue for her either.”

Robby Albarado has been aboard the filly for all three of her wins, and will ride her again in Saturday’s Golden Rod. He won the Golden Rod once before in 2009 with Sassy Image.

“We’re just going to focus on the races in the spring,” said Casse’s son and top assistant Norman. “Everything’s fine. She breezed well but at the end of the day we just think that she’s a legitimate Kentucky Oaks filly. We didn’t think that the Golden Rod was really necessary.”

Dream Dancing, a homebred daughter of Tapit, is out for her first win since a maiden victory over the Saratoga turf course on Aug. 28. She is in search of her first win on dirt.

“We still think that she deserves a chance to run on the dirt,” Casse said. “If it doesn’t work out Saturday and she doesn’t run well then I think her excuses on the main track are over. But I think she’ll run well. She obviously has a lot of upside on the turf if we need to do that, but for now she deserves another shot on the dirt.”

Since her turf maiden win, she began taking shots at some of the best in the division. She was fourth in the Pocahontas (GII) and finished 5 ½ lengths behind fellow Golden Rod aspirant Daddys Lil Darling and then finished fifth in Keeneland’s Alcibiades (GI).

“Dream Dancing is a horse that I think is a very talented horse,” Casse said. “Her last two races she had some serious excuses. I think she needed the race in the Pocahontas. She had a really tough trip in the Alcibiades. We put the blinkers on, made the switch to put Julien (Leparoux) on her and I think that will suit her a little bit better. She’s been breezing well so were excited to see what she does.”

Leparoux will go for his third Golden Rod win aboard Dream Dancing. He previously won the race aboard Pure Clan in 2007 and Kathmanblu in 2010.

Casse also spoke about promising 2-year-old colt, Hollow Point who finished third behind McCraken in a maiden race on Oct. 2 and runs in Saturday’s finale.

“Hollow Point came out of a really key race in September,” Casse said. “We’ve been looking real forward to get him going so we’re pretty excited about him.”

WILL CALL GOES FOR ANOTHER BIG WIN IN THE ‘STARS OF TOMORROW II’ OPENER – Following an emphatic 13 ¼-length romp when breaking his maiden at Indiana Grand, Will Call will go for another solid effort in the first race on Churchill Downs’ ‘Stars of Tomorrow II’ card, a six-furlong first-level allowance race.

“He’s nice, we like him and he’s training well,” trainer Brad Cox said. “He won on a muddy track that day at Indiana but he works well on a fast dirt so we’re excited about him. We think he can run well. It was a big effort and he had a good time and received big numbers out of the race so if he can move forward, he will be competitive.”

Jockey Shaun Bridgmohan was aboard for the horse’s eye-opening effort and will be in the irons for Saturday’s race.

The homebred son of Quality Road last ran in the Street Sense Overnight Stakes on the ‘Stars of Tomorrow I’ card on Oct. 30, where he was five lengths behind McCraken.

“These one-other-than races for 2-year-olds aren’t that much different from the stakes,” trainer Neil Howard said. “We thought that we would stay a little conservative for now because the Jockey Club is a pretty tough race, but he’s done well. We think he’s a horse with a future, but we’ll see.”

Jockey Robby Albarado will be in the irons.

SINGLE 6 JACKPOT – There’s a 18-day carryover of $154,719 in the 20-cent minimum Single 6 Jackpot for Friday, and the sequence covers Races 7-12 starting at 3:57 p.m. EST. The Single 6 Jackpot, which features a low 15-percent takeout, will be paid out only if there is a single winning wager with six winners placed at the required minimum bet value. If there are multiple winning wagers with six winners in the six-race sequence, 90 percent of the net money wagering into the pool will be paid out, and the remaining 10 percent will carry to the Single 6 Jackpot. If there are no tickets will all six winners, 100 percent of the pool will carry to the Single 6 Jackpot. There will be a mandatory payout on closing day.

CATTLEYA SHO AT 12:15 A.M. – The Cattleya Sho, the first of two scoring races on the inaugural “Japan Road to the Kentucky Derby,” will be run Saturday at 12:15 a.m. over one mile at Tokyo Racecourse. The Japan Road to the Kentucky Derby is a points system that is separate and distinct from the already established 35-race “Road to the Kentucky Derby.” The Cattleya Sho awards points to the respective top four finishers on a sliding scale of 40-16-8-4, while the second Japanese scoring race, the Hyacinth, will take place early next year and offer more points: 50-20-10-5. The top point-getter in the two-race series, who accepts the invitation, will secure a spot the starting gate for Kentucky Derby 143 as Japan’s representative. Past performances of the race are available at https://www.kentuckyderby.com/uploads/wysiwyg/assets/uploads/PPs_-_2016_Cattleya_Sho.pdf.

The traditional pool with 23 individual wagering interests and an “all others” option return, and so has the Kentucky Derby Sire Future Wager, which debuted last year and requires bettors to wager on the winning sire for next year’s Kentucky Derby winner.

DOLLAR BEER FROM 3-6 P.M. ON CLOSING DAY – As a special thank you to on-track guests throughout the year, Churchill Downs will conclude the 21-day Fall Meet with $1 draft beer from 3-6 p.m. on Sunday, Nov. 27. 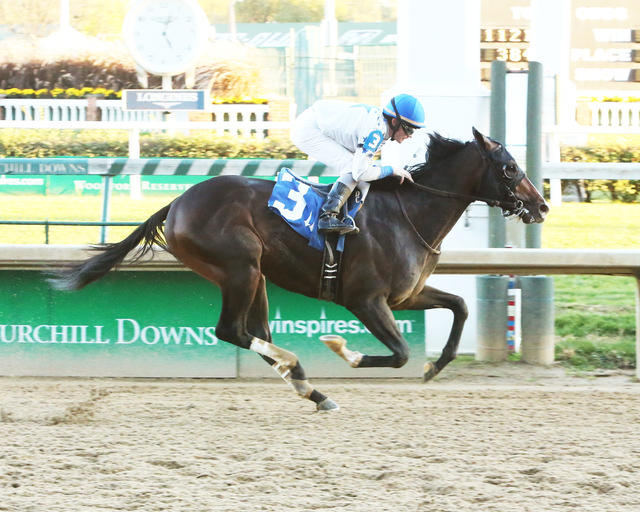