Walking L Thoroughbreds LLC’s Cairo Cat is the early points leader on the 2019 “Road to the Kentucky Derby Presented by Woodford Reserve” after he closed strong in deep stretch to upset 6-5 favorite Tight Ten by a half-length in Saturday’s 37th running of the $150,000 Iroquois (Grade III) for 2-year-olds at Churchill Downs.

The Iroquois also is part of the Breeders’ Cup “Win and You’re In Juvenile Division” Challenge and the win by Cairo Cat earned the Kentucky-bred son of Cairo Prince a guaranteed spot in the starting gate for the $2 million Sentient Jet Breeders’ Cup Juvenile at Churchill Downs on “Future Stars Friday,” Nov. 2. Cairo Cat’s $60,000 entry fees will be paid by Breeders’ Cup Ltd. and his connections will receive a travel stipend.

Tight Ten, who was made the favorite after finishing second to Call Paul in the Saratoga Special (GII), led most of the way through fractions of :24.03, :48.74 and 1:14.06. Cairo Cat raced near the rear early on and moved into contention from the inside down the backstretch. Patiently handled by jockey Brian Hernandez Jr., Cairo Cat waiting for an opening at the top of the stretch, found room and then switched to outside of Tight Ten inside the final furlong to edge clear in the final stages.

Cairo Cat’s earnings total $133,750. Previously, he broke his maiden at 18-1 in an off-the-turf, seven-furlong maiden special weight at Saratoga on Aug. 11.

Cairo Cat was bred in Kentucky by Clifton Farm LLC. The Cairo Prince colt is out of the Tale of the Cat mare La Belle Cat.

Brian Hernandez Jr., jockey of CAIRO CAT (winner): “He did everything we asked him. We warmed up really good in the post parade. This was my first time I was on him and I thought to myself how smooth he was going. He traveled well the whole way around. He certainly didn’t travel like he was a 2-year-old. It’s easy to put in those type of rides with a horse that has that much confidence to put himself in spots like that.”

Greg Geier, assistant trainer of CAIRO CAT (winner): “This is a really nice colt. Kenny told me after he broke his maiden to try the Iroquois and here we are. He worked really well last week. We’ll see how he comes out of things but it’s nice the Breeders’ Cup Juvenile is right here in our backyard.”

Ricardo Santana Jr., jockey of TIGHT TEN (runner-up): “My horse ran well going around two turns for the first time. I thought we were going to get there.”

Florent Geroux, jockey of POLE SETTER (third): “He’s a really nice horse. I think he will have a great future down the road.”

Brad Cox, trainer of POLE SETTER (third): “We were pretty wide around there but he ran well all things considered, I think he’s going to be alright.” 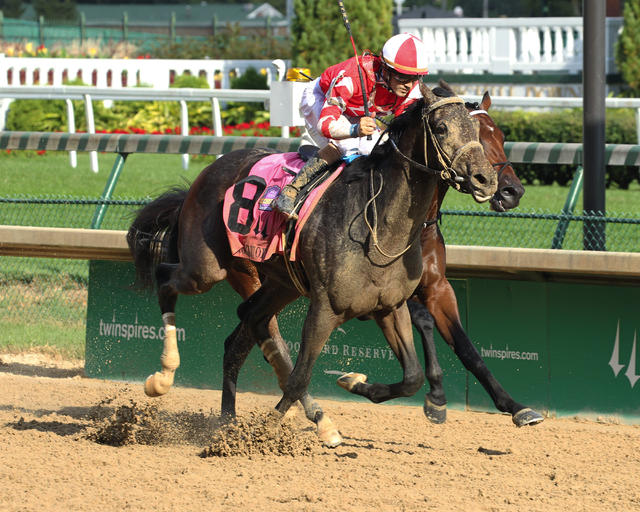