Trainer Jorge Periban has never started a horse beneath the historic Twin Spires of Churchill Downs but 2-year-old California-bred Phantom Boss is poised to give the 59-year-old conditioner his first victory as the 9-5 morning line favorite in Saturday’s $125,000 Bashford Manor (Grade III).

“It’s so amazing being here with this horse,” Periban said. “We sent him out to train this morning and he seemed to love this track. It will be a good test for him (in the Bashford Manor). We knew his father (Shackleford) loved this track and did very well here. Why not take a shot?”

Phantom Boss won at second asking in a state-bred maiden special weight contest at Santa Anita. Owned by Bada Beng Racing, Tom Beckerle, Terry Lovingier and Amanda Navarro, Phantom Boss will have the riding services of California-based Rafael Bejarano. One of the top riders on the California circuit, Bejarano spent several years as a mainstay at Churchill Downs and accumulated 409 victories beneath the Twin Spires.

Periban grew up in Mexico City and was one of 18 children. As a child, Periban’s parents operated a restaurant at a local racetrack. Prior to training, Periban spent several years as an exercise rider until he relaunched his training career in 2004. In total, Periban has 310 victories through 2,736 starters with more than $5.8 million in earnings.

“It’s been a tough and long road,” Periban said. “To be here at Churchill Downs is amazing. It’s my first time being here and I absolutely love it. I hope to make it back serval times in the future.”

The six-furlong Bashford Manor, carded as Race 11 at 5:59 p.m. (all times Eastern), is the featured event on the 12-race extravaganza to close the Spring Meet at Churchill Downs. Also on the program is the Bashford Manor’s female counterpart, the $125,000 Debutante (Listed) for 2-year-old fillies, and the $120,000-added Kelly’s Landing Overnight Stakes for older sprinters. A total of 137 horses were entered for Saturday’s card, which has a first post of 12:45 p.m.

In the Bashford Manor’s companion race, the $125,000 Debutante, Three Chimneys Farm’s impressive maiden winner Magic Dance was made the 8-5 morning line favorite as she faces eight rivals in the six-furlong contest.

Magic Dance (1-1-0-0—$54,848), a 2-year-old daughter of More Than Ready, dazzled in her debut, a five-furlong maiden special weight contest on June 7. The precocious filly will attempt to give her trainer Steve Asmussen a fifth win in the Debutante and first since Rated Feisty won the 2007 edition in a stakes record performance of 1:09.27.

The Debutante is slated as Race 10 at 5:26 p.m. Churchill Downs admission gates will open Saturday at 11:45 a.m. General Admission is $5, reserved seating is $12 and reserved dining packages are $41. Tickets can be purchased in advance online at ChurchillDowns.com/Tickets.

“It certainly was the next logical spot to enter (Transatlantic Kiss),” said Foley, who began the week tied for No. 10 in the trainer standings with seven wins. “I think he keeps improving with every one of his starts and he really put everything together in his last race. He’s been training really well every morning from that race so the (Kelly’s Landing) was a good spot to enter him back.”

Transatlantic Kiss, owned by Bernard Racing, drew post position No. 9 in the Kelly’s Landing with jockey Brian Hernandez Jr. in the saddle at odds of 8-1. His stablemate, Randy Exelby, Steve Vanovich, Larry Craig and Tagg Team Racing’s Control Stake drew post 3 with Ricardo Santana Jr. back in the irons.

“I think it’ll be a big plus getting Santana back on board,” Foley said. “He’s gotten along with him great in the past. It’s a little quick back from his last start (June 15) but hopefully the race will set up nicely for him.”

The Kelly’s Landing is one of three stakes races on Churchill Downs’ 12-race closing day card. The seven-furlong event will go as Race 8 at 4:22 p.m. (all times Eastern).

LOCALLY-BASED TRAINERS, JOCKEYS MAKE SUMMER PLANS – Only 31 races remain at the 2019 Churchill Downs Spring Meet and several jockeys and trainers are making their summer travel plans to spend the next eight weeks at either Ellis Park or Saratoga Race Course.

With Ellis Park’s increased purse structure, the backstretch at Churchill Downs could remain busy with training outfits such as Bret Calhoun, Mark Casse, Norm Casse, Brad Cox, Larry Jones, Dallas Stewart and Ian Wilkes all keeping their stables based at Churchill Downs to run at the Henderson, Ky. track.

“The racing in Kentucky has been awesome,” Norm Casse said. “It makes a lot of sense to keep horses here for the majority of the year because of how good the purses are. Kentucky racing is on the rise and it’s an exciting time to be involved.”

Only three jockeys in the Churchill Downs riding colony are scheduled to spend the summer in Saratoga – Tyler Gaffalione, Julien Leparoux and Ricardo Santana Jr. Florent Geroux, who previously spent the summer riding at Saratoga, will remain based in Kentucky and ship to Saratoga for several stakes races throughout their meet.

“Kentucky is our home so it makes sense to stay here for the summer,” said Geroux, who lives in Louisville with his wife and two young daughters. “I’ll travel some on Saturdays for the big races around the country. We have a pretty busy summer riding out of town but I’ll ride at Ellis some, too.”

Because Saturday is closing day, there will be mandatory payout in the Single 6 Jackpot with all monies distributed to ticket holders with the most winners in the six-race series. Saturday’s Single 6 Jackpot, which only costs 20 cents per combination, will cover Races 7-12 starting at approximately 3:50 p.m. The daily six-race sequence, which has a low 15% takeout, has challenged bettors to select the winners of six consecutive races but the Jackpot pool is only paid if there is a single winning ticket. When multiple tickets contain six winners 90% of that day’s pool is paid out and 10% is added to the Jackpot carryover.

DOWN THE STRETCH – Jockey Robby Albarado will be off his mounts indefinitely after fracturing his left wrist when he was unseated from his mount in Sunday’s second race, according to agent Jake Romans. 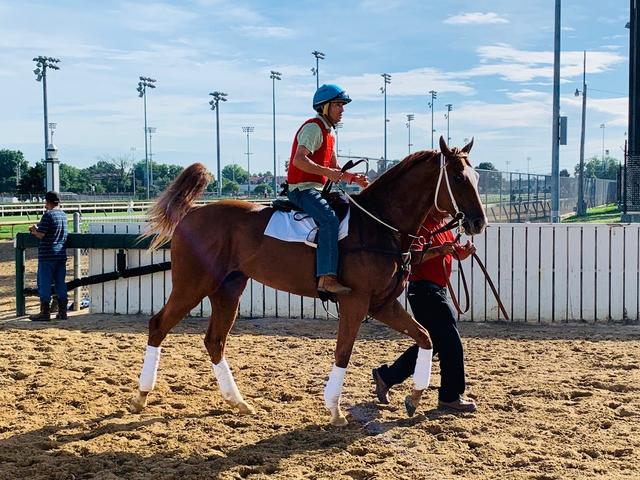