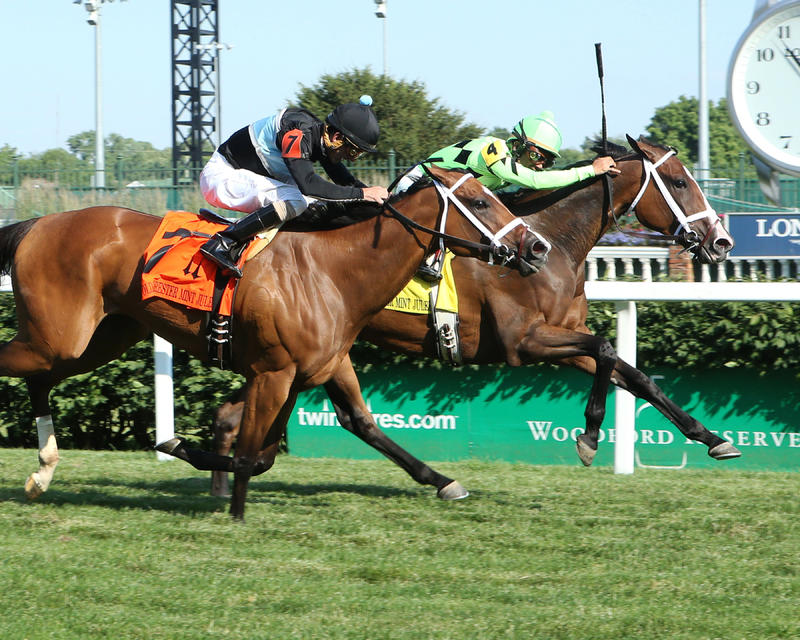 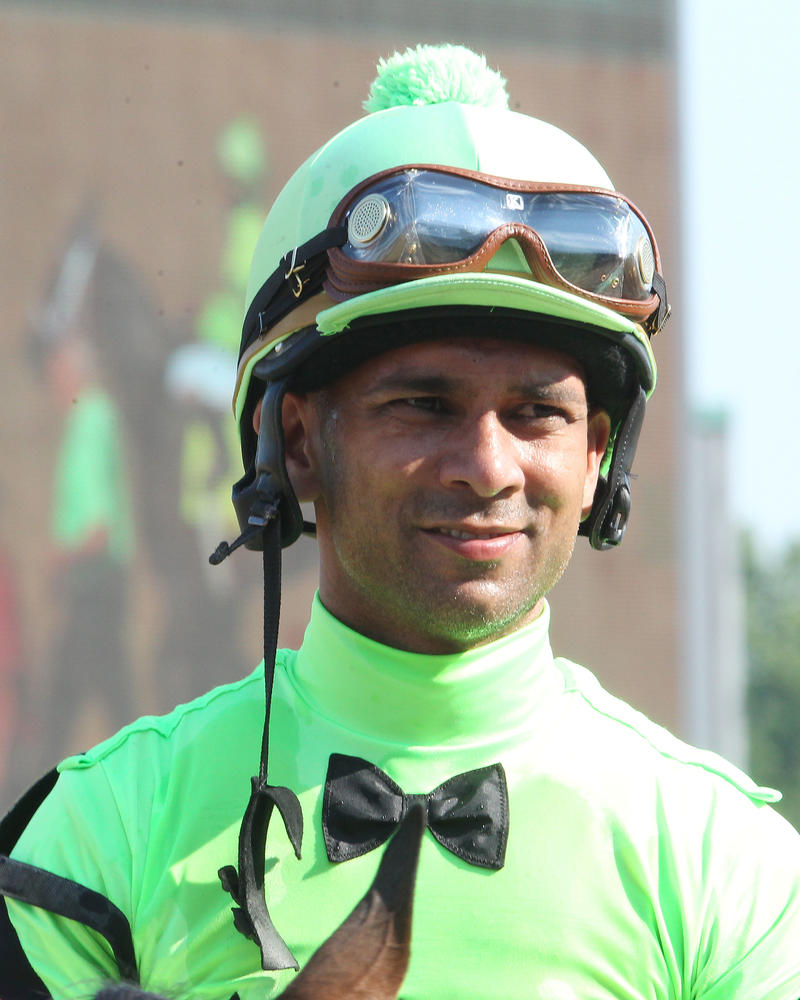 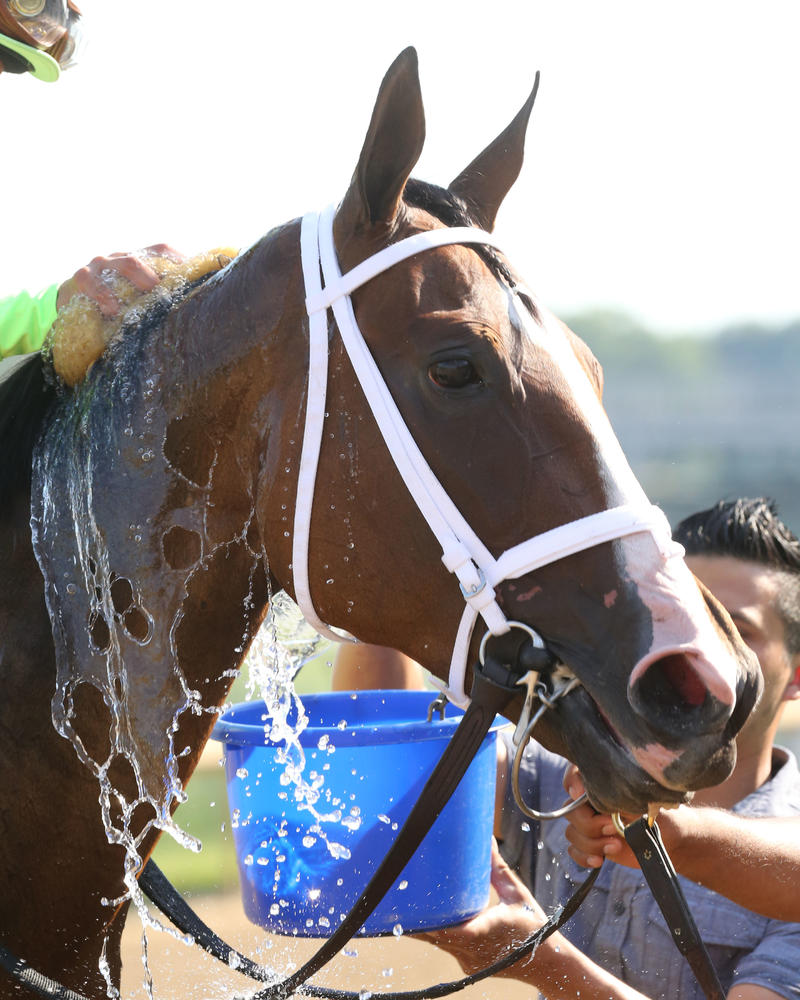 The victorious Cash Control was awarding with cooling buck of water when eh returned to the winner's circle following her narrow victory in the $100,000 Old Forester Mint Julep (GIII). (Coady Photography | Churchill Downs)

Richard and Bertram Klein’s 5-year-old mare Cash Control slipped through an opening along the rail at the head of the stretch, grabbed the lead at the three-sixteenths pole and narrowly held on to beat stablemate Sweet Acclaim (IRE) by a head to win the 40th running of the $100,000 Old Forester Mint Julep Handicap (GIII) on Saturday at Churchill Downs.

Trained by Brad Cox – who also trains the runner-up – and ridden by Shaun Bridgmohan, Cash Control covered the 1 1/16 miles on a firm Matt Winn Turf Course in 1:41.12 while toting 118 pounds.

The Kleins won the race for the second time in four years. Their 4-year-old filly Miz Ida was victorious in the 2013 running.

Defending race champ Kiss Moon set the pace with a first quarter-mile in :23.57, a half-mile in :46.92 and three-quarters of a mile in 1:11.33 as Cash Control tracked along the inside about 4 ½ lengths behind in fourth. Zipessa grabbed the lead at the head of the stretch but an opening developed along the inside hedge and Cash Control darted through to draw even. She grabbed the lead after a long drive down the stretch and was able to withstand a late rally by Sweet Acclaim (IRE) to just miss in a photo finish that was determined by the bob of a head.

“I was very proud of both of them and honestly the way they had been training we had kind of expected it,” Cox said. “They both had been training as well as mares could train and they both showed up and ran great races.”

The victory, the third stakes victory for Cash Control this year, was worth $58,900 and increased the mare’s earnings to $343,600 with a record of 15-8-2-2. This winter, Cash Control won the $50,000 Tiffany Lass and $60,000 Daisy Devine at Fair Grounds, and was third beaten 4 ½ lengths by reigning Champion Female Turf Horse Tepin in the Churchill Distaff Turf Mile (GII) on Kentucky Derby Day.

Cash Control is a daughter of Pioneerof the Nile out of the Mt. Livermore mare Hidden Assets and was bred in Kentucky by her owners.

Racing at Churchill Downs resumes Sunday with a nine-race program that begins at 12:45 p.m. EDT. There is a $549,124 carryover in the Single 6 Jackpot, which covers Races 4-9.

BRAD COX, trainer of CASH CONTROL (winner) and SWEET ACCLAIM (runner-up): “I was very proud of both of them and honestly the way they had been training we had kind of expected it. They both had been training as well as mares could train and they both showed up and ran great races. I honestly have no clue where they would run next. I’d like to split them up I know that. I’m super- pleased with both of them. Obviously the other one (Sweet Acclaim) was close to becoming a graded stake winner but I just feel like as long as she stays healthy, she will become one. She ran a great race.”

SHAUN BRIDGMOHAN, jockey of CASH CONTROL (winner): “I didn’t know it was her (Sweet Acclaim) to be honest; I just heard another horse coming. It just seems like his other horse would be taken around and my mare was ultra-game. She just stuck her neck out and she really wanted to win today.”

ROBBY ALBARADO, jockey on SWEET ACCLAIM (runner-up and 9-5 favorite) – “I had a great trip, though I would have preferred to have the trip the other horse (Cash Control) had. She had a little bit better trip than I had, and I had to go around horses. But the circumstances dictated that – turning for home I had no choice but to go around. She ran hard. Her first two races (of the year) were pretty easy – they were comeback races. But she’s a quality filly. The winner is an exceptional filly. I’ve beat her before and she’s beat me. I think you’ll see these two fighting it out a couple of times this year.”

MITCHELL MURRELL, jockey on ZIPESSA (third): “It was a good trip – exactly what we wanted. She ran her race, but the other two just ran a little better race than us. They go the money. Everything was perfect. I got to sit off the pace, just where I wanted, and when I wanted to go we went. But the result wasn’t exactly what we wanted.” 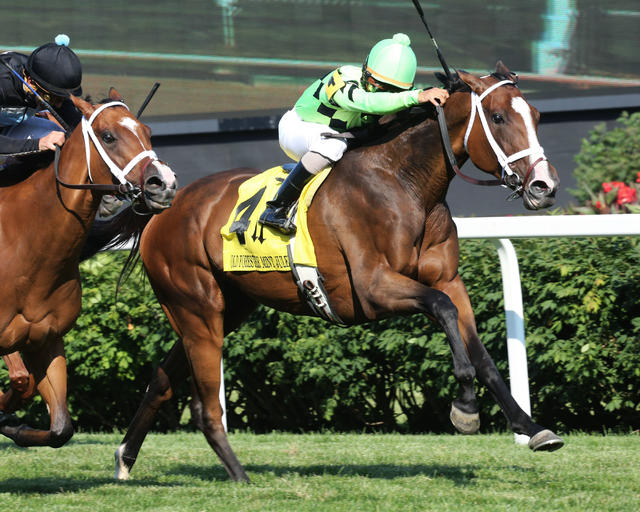