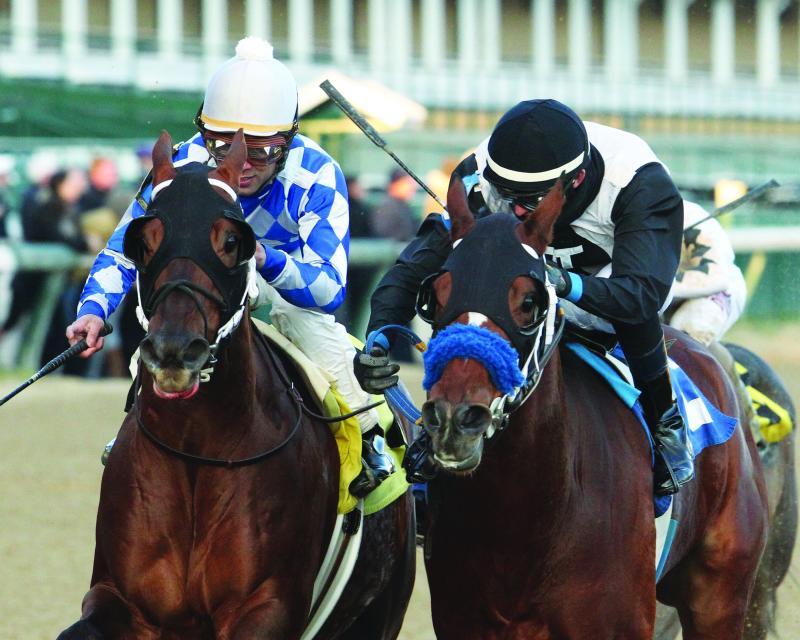 Doubledown Stables Inc.'s Recount (right in black and white silks) battled back under jockey Chris Landeros after being passed in the stretch to edge odds-on favorite Holy Boss in the $78,980 Bet On Sunshine Overnight Stakes. (Coady Photography, Churchill Downs)

Cash Control, ran 1 1/8 miles over a firm Matt Winn Turf Course in 1:49.39 to earn her fourth career stakes win and second at Churchill Downs. This summer, she narrowly won the $100,000 Old Forester Mint Julep Handicap (GIII) by a head.

Lots o’ Lex led the field of 12 fillies and mares through early fractions of :24.56, :48.94 and 1:12.95 with Belle de Nuit (ARG) in close pursuit and Cash Control relaxing nicely in third on the outside under a snug hold by Bridgmohan. Cash Control drew closer to Lots o’ Lex around the turn and drew even with ease at the top of the stretch before putting the field away with three-sixteenths of a mile to the wire.

“Turning for home, obviously (Bridgmohan) had a ton of horse,” Cox said. “I was very proud of her. She was training great coming into this race and it was a big effort, very pleased with her. Did I expect her to win like that? No, but I’m sure glad that she did. Graded stakes are tough to win.”

“She’s got tactical speed and rated real nice, relaxed good and accelerated when I needed her to,” Bridgmohan said.

The Cardinal Handicap snapped a three-race losing streak for Cash Control, who banked $57,660 to improve her record to 19-9-4-2—$491,794. Prior to the Cardinal, Cash Control finished second as the favorite in both the Indiana General Assembly Distaff at Indiana Grand and the Ladies Turf at Kentucky Downs before she ran sixth of 10 behind Photo Call (IRE) and reigning female turf champion Tepin in the Grade I First Lady at Keeneland.

“She’s been doing very well,” Bridgmohan said. “Obviously the competition was a little bit stiffer last time in the Grade I at Keeneland but there’s nothing wrong with winning Grade IIIs with her.”

Cash Control is a daughter of Pioneerof the Nile out of the Mt. Livermore mare Hidden Assets and was bred in Kentucky by her owners.

One race earlier, Recount dug in gamely down the stretch to prevail by a head in a fierce battle with 8-5 favorite Holy Boss to win the ninth running of the $78,980 Bet On Sunshine Overnight Stakes. The 4-year-old Illinois-bred gelding, owned by Richard Templer’s Doubledown Stables Inc., ran six furlongs on a fast track in 1:09.45 under Chris Landeros for trainer Jimmy DiVito. The $47,078 first prize jumped Recount’s earnings to $437,397from nine wins in 23 starts. Seven of his wins have come against stakes company. Recount paid $17.20 to his backers for a $2 win bet.

BRAD COX, trainer of CASH CONTROL (winner): “The fractions were good, they were kind of strung out a little bit. She was laying there third and going down the backside nobody was really on the inside or outside of her so she was able to relax, shut off and kick home. Turning for home, obviously he had a ton of horse. I was very proud of her. She was training great coming into this race and it was a big effort, very pleased with her. Did I expect her to win like that? No, but I’m sure glad that she did. Graded stakes are tough to win.”

SHAUN BRIDGMOHAN jockey of CASH CONTROL (winner): “She ran well, obviously the right trip for her always gets in the right spot. She’s got tactical speed and rated real nice, relaxed good and accelerated when I needed her to. She feels good. She’s been doing very well. Obviously the competition was a little bit stiffer last time in the Grade I at Keeneland but there’s nothing wrong with winning Grade IIIs with her.”

Q: Will you take her on to Florida for the winter? “We’ll take her to Florida. Everything will be on the table and we’ll try to make her a stakes winner.”

JON COURT, jockey on KITTEN’S ROAD (runner-up): “If she had been on the front end, she would have exhausted her resources. I just wanted to set her up and make one big run. We had to navigate through traffic. We got up and were second best. I don’t know if we would have caught the winner, but I sure would like to have had her (Cash Control) a little bit more in my sights. I just had to navigate through them – I had to alter my path a little here and there.”

EDUARDO PEREZ, jockey LOTS O’ LEX (third): “She was laying pretty good. From the first jump she was pretty much right there. My horse ran a good race. She’s a nice filly.”

JIMMY DIVITO, trainer of RECOUNT (winner): “He ran really well last time over there I thought, and it looked like he liked Churchill. The horse had some speed and the track has been pretty fast so I figured we’d take a shot. That was a tough horse he was up against. He’s always given a good effort and he’s always been right there. When he gets beat he doesn’t get beat by much. The Illinois boys are coming in!”

CHRIS LANDEROS jockey of RECOUNT (winner): “At the eighth pole I got headed by Holy Boss and I said, ‘Oh man this is going to be a tough loss.’ But he dug in, put his head down and he was game today, man. (Trainer) Jimmy (DiVito) did a great job getting him ready and it’s pretty cool for the Illinois-bred. I worked him five-eighths the other day and he breezed very well. I knew he won last time with Drayden (Van Dyke) and I saw that W.B. Smudge broke a little sharp so I just sat off him.”

SHAUN BRIDGMOHAN, jockey on 4-5 favorite HOLY BOSS (runner-up): “That horse on the inside (Recount) fought back hard, but I thought mine tried all the way.”

DECLAN CANNON, jockey on ALSVID (fourth): “He ran good. I was in a lovely position turning for home, but he just didn’t lay down for me and quicken like he normally can. He’s still a good horse – I’d just put a line through that one.”