“They’re both on point for the weekend,” Casse’s son and assistant trainer Norman Casse said. “Pretty City Dancer looked like she was just hitting the ground real well and we’re real excited about the way that she worked. Classic Empire looked real well so we’re excited about running both of them on Saturday.”

A son of Pioneerof the Nile, Classic Empire made his career debut a winning one in a four-furlong maiden special weight at Churchill Downs on May 4, despite coming out of the gate a step slow. Pretty City Dancer, a daughter of Tapit, won on her second attempt at the same distance by 2 ¾ lengths on May 27. Prior to that, she was third beaten 2 ¼ lengths behind Harlands Thunder.

“I think they’re both super intelligent,” Casse said. “Classic Empire had kind of a bad trip his first start and still won regardless. I think Pretty City Dancer was kind of looking around and trying to figure things out and then she put in a much more polished effort her second time. I think they both are going to run significantly better on Saturday night. That’s something to be excited about.”

The Bashford Manor and Debutante are six-furlong races, and Casse believes that both 2-year-olds should improve with added distance.

“I think both of them have such efficient strides that the longer the better for those two,” Casse said. “You kind of have dreams for 2-year-olds when they first break their maiden and you have expectations and try to tone it down a little, but we’ll just go race to race with them.”

Another highly-regarded 2-year-old in the Casse barn is Thirstforlife, who finished third behind Silvertoni in the $100,000 Kentucky Juvenile and returned to break his maiden by 6 ½ lengths on June 4. The Stay Thirsty colt is likely to compete at Del Mar this summer, according to Casse.

Also on the Saturday work tab for Casse was Airoforce, a runner-up to stable mate Catch a Glimpse in the June 4 Penn Mile (GIII) on June 4, who breezed five furlongs in 1:00.80 and will point to the $1.25 million Belmont Derby Invitational (GI) on July 9. Noble Bird, sixth in the June 11 Metropolitan Handicap (GI) at Belmont Park, breezed a half-mile in :49.40.

“When you’re younger, you don’t realize how much a thousand really is and all the work that has to go into it,” Hill said. “Obviously I’m really thankful for the people that helped me along the way. That is probably the most special part about it. Obviously I couldn’t be here without the people who have been giving me the opportunity and the horses themselves who have taken me there. It’s a special accomplishment and has definitely been a goal that I have set out to reach, but that’s any jockey. Any jockey would want to reach 1,000-plus wins. Hopefully the next thousand comes a little quicker and I’m happy to get this one out of the way.”

Hill began his riding career in 2003 and piloted his first winner the following year. In 2005, he was a finalist for an Eclipse Award for Top Apprentice Jockey, which was won by Emma-Jayne Wilson. To date, he has won 16 graded stakes races, including a Grade I aboard First Defense in the 2008 Forego at Saratoga.

“I would really like to stay consistent within the Top 25 throughout my career,” Hill said. “That to me would be the best because then you get some consistency and people rely on you. One thing people don’t realize is how lucky and fortunate you have to get just to have things fall your way so it’s just a real nice milestone to reach.”

FOREVAMO RETURNS IN SUNDAY ALLOWANCE – Brittlyn Stables’ Forevamo, a late-closing second to Sharp Azteca in the $250,000 Pat Day Mile (GIII) on the May 7 Kentucky Derby undercard, will return to action in Sunday’s fifth race at Churchill Downs, a first-level allowance/optional claiming event at 1 1/16 miles.

“He’s coming in nice and everything has gone according to plan,” said trainer Al Stall, Jr., who became only the 34th trainer to win 200 races at Churchill Downs when Miss Bortolazzo won Saturday’s opener. “We knew that we had a race with these conditions at the end of the meet so we were just trying to find a nice two-turn race that’s not as tough as the Ohio or (Grade II, $500,000) Indiana Derby (on July 16) or races like that.”

In eight career starts, the Florida-bred son of Uncle Mo’s lone victory came in October’s Jean Lafitte Stakes at Delta Downs. In four starts this year he has been the runner-up three times, one of which came in the Risen Star (GII) at Fair Grounds where he was beaten only a half-length by Kentucky Derby third and Matt Winn winner Gun Runner.

Should he exit Sunday’s race in good order, Forevamo would likely return to stakes action. Stall said the horse would be nominated to the Indiana Derby as well as the $750,000 West Virginia Derby (GII) at Mountaineer Park on Aug. 9.

Jockey Florent Geroux, the pilot in his last effort, will return to the saddle for Sunday’s race.

DOWN THE STRETCH – Sunday is Family Adventure Day Presented by Kroger. Churchill Downs will have numerous family activities such as pony rides, inflatables, petting zoos, stick-horse races, face painters and more. Family Adventure Day tickets are just $8 when purchased online in advance at ChurchillDowns.com/Tickets, and $1 from each ticket will benefit Kosair Children’s Hospital. … Churchill Downs will close its 2016 Spring Meet with a bang on Saturday, July 2 as the Louisville racetrack hosts “Downs After Dark: My Country ’Tis of Thee – Presented by Stella Artois and Jack Daniel’s.” Guests are encouraged to wear red, white and blue, watch racing under the lights and enjoy the music of rising local country artists Wildwood on the Plaza Stage. The July 2 closing night card will begin at 6 p.m. … A trio of stakes races are scheduled for closing night. Stakes coordinator and assistant racing secretary Dan Bork has the following 2-year-olds listed as probable for the 115th running of the $100,000 Bashford Manor (GIII) at six furlongs: Capt. Grider, Recruiting Ready, Riv, Star Empire (GB), Tip Tap Tapizar and U S Officer. … Probable 2-year-old fillies for the 116th running of the $100,000 Debutante (Listed) at six furlongs: China Grove, Country Candy, Like a Hurricane, Maximum Edge, Silver Threads, Tricky One and Whole Scoop. … Nominations for the seventh running of the $67,000-added Kelly’s Landing Overnight Stakes, a seven-furlong sprint for 3-year-olds and up, close at midnight. 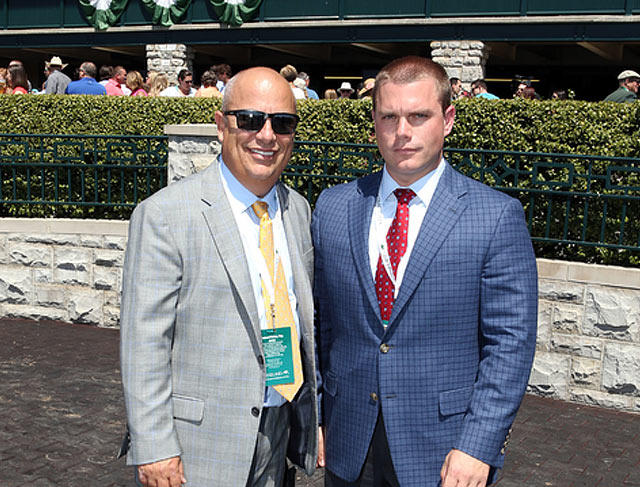