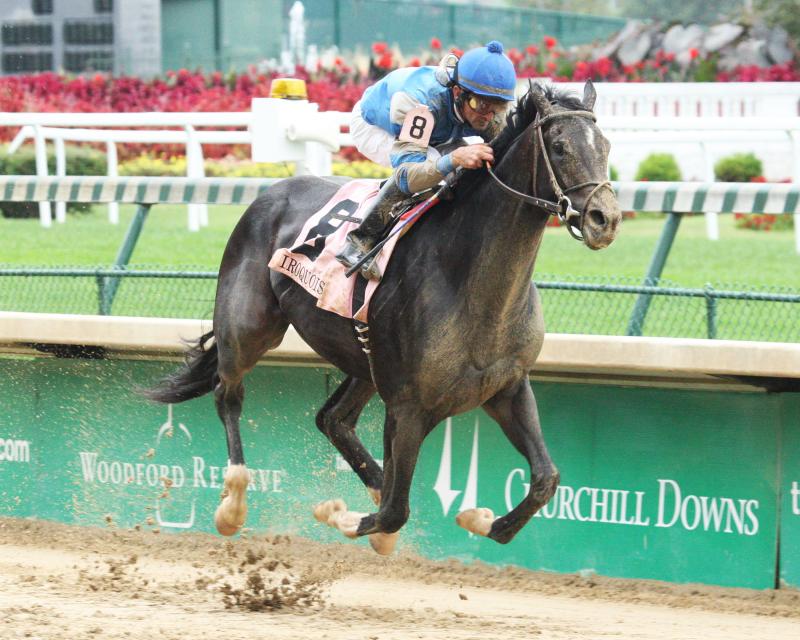 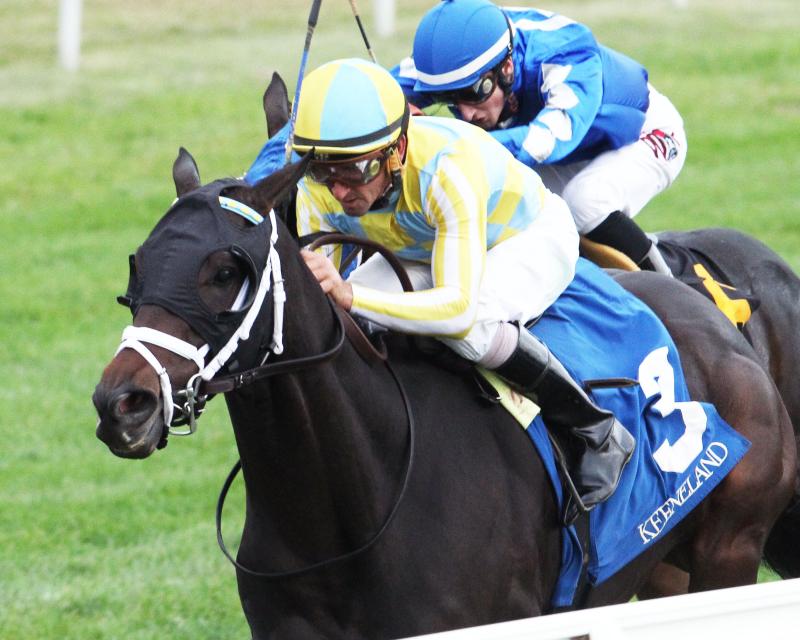 John C. Oxley's Tizzarunner, shown in a recent allowance win on the Keeneland turf, is one of a trio of 3-year-olds scheduled to run for trainer Mark Casse in Saturday's $100,000 Commonwealth Turf (GIII). (Coady Photography, Keeneland) 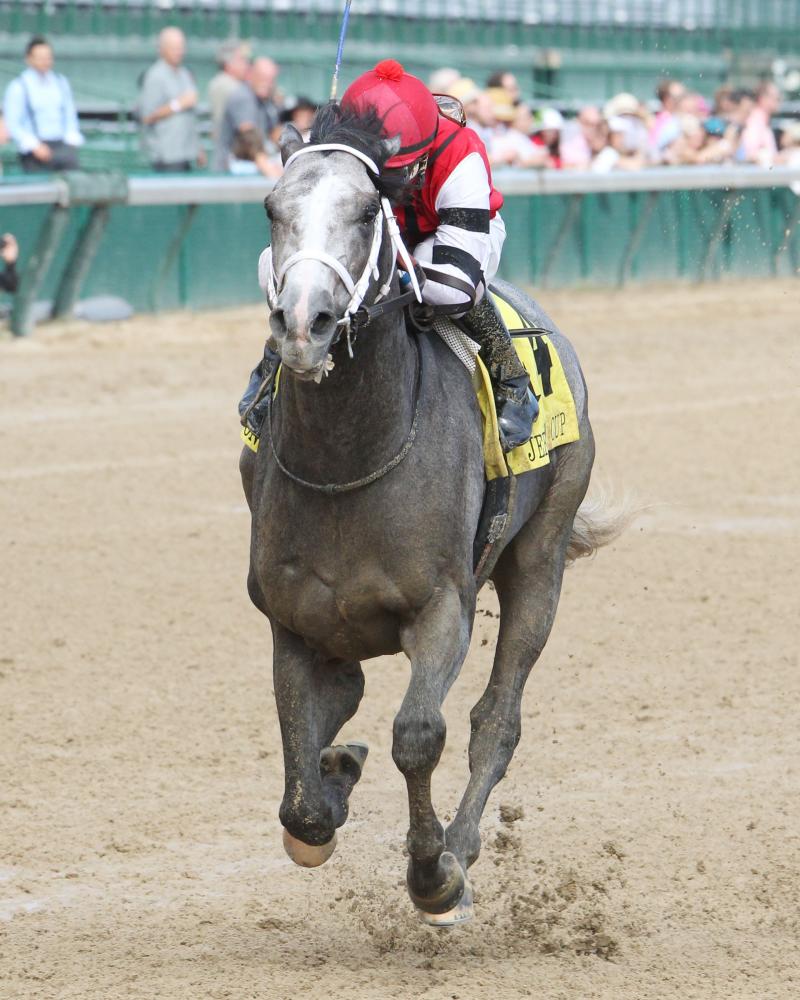 Trainer Mark Casse will occupy three slots in the starting gate for Saturday’s 13th running of the $100,000 Commonwealth Turf (Grade III) at Churchill Downs, which will be contested over 1 1/16 miles on turf, with 3-year-olds Blackout (FR), Ikerrin Road (IRE) and Tizarunner.

Blackout (FR), who will break from post 3 under Florent Geroux, will be making his third start in the United States. The French-bred son of Dream Ahead made his American debut in an allowance race at Saratoga on Sept. 3 where he was eighth beaten 5 ¾ lengths. He turned things around in his following start in a Belmont Park allowance race, winning by three-quarters of a length.

It looks like now he needed the race at Saratoga,” said Mark’s son and assistant Norman Casse. “We were really high on him ever since he ran his race up at there. He breezed really well since that last win up at Belmont Park so we’re expecting him to run pretty well on Saturday.”

Casse also will be represented by Ikerrin Road (IRE). Breaking from the nine-hole under Ricardo Santana Jr., the son of Iffraaj will look to improve off of his first U.S. start which was a fifth-place effort in a 5 ½-furlong Keeneland allowance event. The Commonwealth Turf will be his first start beyond seven furlongs.

“He’s been working really well since his last start,” Casse said. “In his European races he was just sprinting and he kind of got a way badly in his last race at Keeneland and it looked like he needed some more ground.”

Breaking just to the outside of Ikerrin Road (IRE) is stablemate Tizarunner who will be ridden by Chris Landeros. The ultra-consistent Maryland-bred son of Tizway takes a shot at a second straight triumph after tasting success over the Keeneland lawn on Oct. 27. In 10 starts, Tizarunner has only finished off the board once in an allowance race at Belmont Park two starts ago where he was fifth beaten three lengths.

“Tizarunner ran a career best race last time at Keeneland and we were really excited about it,” Casse said. “This is the last real opportunity to run him against straight 3-year-olds at this level. They’re all coming into it the way we want them to. I think we’ve got a pretty good hand going into the race.”

“That might happen,” Casse said. “She ran a really good race but she had kind of a tough trip. Going forward we’ve got some high expectations for her. She’s definitely a Kentucky Oaks-type of filly. She’s back here at the barn and we’ll go forward from there. Everything’s on the table right now but for now we’ll just see how she reacts from coming back from California.”

Casse’s reigning Champion Turf Mare Tepin exited her runner-up effort in the Breeders’ Cup Mile (GI) behind Tourist well, according to Casse, and could make one more start in the $2.967 million Longines Hong Kong Mile (GI) on Dec. 11 at Sha Tin Racecourse. Should the six-time Grade I-winning mare make such a trip, she would be going for a third victory on a different continent. Earlier in the summer, she won the Queen Anne (Group I) at Royal Ascot in England.

Tepin is scheduled to remain in training next year.

“We’re just going to have to monitor her,” Casse said. “She ran a big race in the Mile and she’d have to get on a plane relatively quickly so if she’s indicating that she’s tired or unhappy and that’s it’s time for a break we won’t go. But if she’s coming out of her skin so to speak, we’ll look at it. The goal right now is to bide long term so we’ll just have to see how she reacts in the next few days.”

Casse’s Breeders’ Cup Juvenile (GI) winner Classic Empire will rest the remainder of the year to focus on preparing for next year’s Kentucky Derby Presented by Yum! Brands (GI). The son of Pioneerof the Nile’s win in the Breeders’ Cup solidified his chances at an Eclipse Award for Champion Two-Year-Old Male.

“We always want to win Eclipse Awards, but most importantly it would be pretty meaningful for the Oxley’s,” Casse said. “They have been one of our biggest supporters from the very beginning. We’re super proud to have won a Breeders’ Cup for them and to potentially win an Eclipse Award for them. This will give us something to look real forward to in the spring.”

“There’s really nothing for them until next year at Gulfstream or Tampa,” Casse said.

NOT THIS TIME TO REST REMAINDER OF THE YEAR – Trainer Dale Romans will be giving his highly-regarded 2-year-old Not This Time some time off after his hard-fought runner-up effort behind Classic Empire in the Breeders’ Cup Juvenile (GI) with the ultimate goal being next year’s Kentucky Derby Presented by Yum! Brands (GI)

“He came out of his race good,” Romans said. “We’ll regroup, give him the rest of the year off and focus on next year’s Kentucky Derby with him.”

Prior to the Breeders’ Cup, the Albaugh Family Stables-owned half-brother to Liam’s Map was an emphatic 10-length maiden winner at Ellis Park on Aug. 12, which he followed with an equally impressive win in the Iroquois (GIII) at Churchill Downs on Sept. 17, which he won by 8 ¾ lengths.

SINGLE 6 JACKPOT – There’s a seven-day carryover of $29,240 in the 20-cent minimum Single 6 Jackpot for Thursday, and the sequence covers Races 5-10 starting at 3 p.m. EST. The Single 6 Jackpot, which features a low 15-percent takeout, will be paid out only if there is a single winning wager with six winners placed at the required minimum bet value. If there are multiple winning wagers with six winners in the six-race sequence, 90 percent of the net money wagering into the pool will be paid out, and the remaining 10 percent will carry to the Single 6 Jackpot. If there are no tickets will all six winners, 100 percent of the pool will carry to the Single 6 Jackpot. There will be a mandatory payout on closing day. 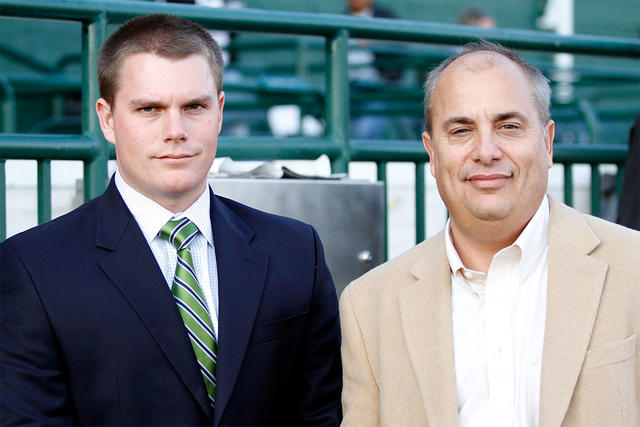