Trainer Mark Casse’s stakes quartet of Helium, Palazzi, Spanish Loveaffair and Tap It to Win are poised to return to form on Saturday’s Stephen Foster Preview Day at Churchill Downs.

“I think all four of our horses are very live in those races,” Casse’s assistant trainer David Carroll said. “Each one of them fit very well in their respective fields and I think we are setting up for a solid day of racing.”

“He ran a solid effort in the Derby,” Carroll said of Helium. “I think he will be able to sit a better trip in the Matt Winn from just off the pace and I think he matches up with this field better.”

One race after the Matt Winn, Live Oak Plantation’s four-time winner Tap It to Win will hope to avenge his 11th-place finish in the $500,000 Churchill Downs (GI) as the 3-1 morning line favorite in the six-furlong Aristides.

“We’ve been working mentally with him a lot following that race,” Carroll said. “I think we’ve got him to a good place after the Churchill Downs. He got stuck in a speed duel that day and it wasn’t the best of trips. I think drawing to the outside of this field should help him sit a better trip.”

Earlier in the card, John Oxley’s two-time winner Palazzi will have to overcome the rail draw in the 1 1/8-mile Audubon Stakes run over the Matt Winn Turf Course.

“We are supposed to get some rain Friday so we’ll have to wait and see what the turf condition is like,” Carroll said. “He likes to be to the outside of horses and got into a tough trip in the American Turf (GII). He’ll have to find a trip breaking from the rail but I think can bounce back from that race fairly well. He’s been a very consistent horse since running on the grass.”

The only start Palazzi missed the board on the turf was in the $500,000 American Turf (GII). Arguably his best effort came at the end of January when he got up to win the $200,000 Texas Turf Mile at Sam Houston by a nose under Carroll’s son Declan.

“She took a little longer to come out of the (April 3) Appalachian (GII) but we got her back to Churchill and she’s picked things up nicely the last few weeks,” Carroll said. “She’s really flourished the last couple of weeks and I think will be ready for a top effort in this spot.”

Churchill Downs’ admission gates will open at 11:30 a.m. and tickets, starting at $5, are available on www.ChurchillDowns.com/tickets. For those outside the Louisville area, all 11 races are scheduled to be televised on Fox Sports 2 from 12:30-6 p.m. Fans can also watch the live simulcast feed and wager on www.TwinSpires.com, the official ADW of Churchill Downs Incorporated.

Trained by Brad Cox, Night Ops finished a half-length behind fellow Blame rival Silver Dust in the Ben Ali as the 4-5 post time favorite. Previously, the 5-year-old son of Warrior’s Reward won the $100,000 Cornhusker Handicap (GIII) as a 4-year-old and was victorious in the $350,000 Essex Handicap earlier in his 2020 season.

Envoutante, a 4-year-old daughter of Uncle Mo, finished one-length behind top filly Shedaresthedevil in the $500,000 La Troienne (Grade I) on the undercard of the Longines Kentucky Oaks (GI). Trained by Kenny McPeek, Envoutante had a solid 3-year-old campaign with victories in the $100,000 Remington Park Oaks (GIII) and $200,000 Falls City (GII) against elders.

MANDATORY 20-CENT DERBY CITY 6 PAYOUT SLATED FOR SATURDAY – There will be a mandatory payout in the 20-cent Derby City 6 on Saturday at Churchill Downs with all monies distributed to ticket holders with the most winners in the six-race series.

The jackpot carryover was $89,846 at the start of Thursday’s eight-race card, and provided there are no single ticket winners Thursday or Friday, track officials estimate the force-out of Saturday’s total Derby City 6 pool to eclipse $500,000 with new money.

MEET LEADERS – Jockey Tyler Gaffalione extended his Spring Meet lead over Florent Geroux in the rider standings, 23 wins to 18, respectively. Gaffalione is in search of his fifth riding title beneath the Twin Spires. … Trainers Brad Cox and Mike Maker are tied atop the standings with nine wins. Brendan Walsh was in third with eight victories. … Susan and Jim Hill began the racing week at the top of the owner standings with three wins from 10 starters. There was an 18-way tie for second with two wins.

DOWN THE STRETCH – Racing continued Thursday at Churchill Downs for Twilight Thursday presented by Blue Moon. The evening featured eight races along with live music from Jossie Gomez, $1 Blue Moon and domestic draft beer and food trucks. There was an $89,846 jackpot carryover in the 20-cent Derby City 6 that spanned Races 3-8. … Juddmonte’s Set Piece (GB) was made the 2-1 favorite for Saturday’s $110,000 Douglas Park Overnight Stakes. … Godolphin’s Belmont Stakes (GI) likely favorite Essential Quality is scheduled to breeze at 5:30 a.m. Saturday morning prior to shipping to Belmont Park for the June 5 race. … “Inside Churchill Downs” will air Friday at 6 p.m. on ESPN 680/105.7. The one-hour radio program will get fans ready for Saturday’s Stephen Foster Preview Day at Churchill Downs. Those outside the Louisville market can listen live on www.espnlouisville.com. ..,. For more information and to purchase tickets for the Spring Meet, visit www.churchilldowns.com. 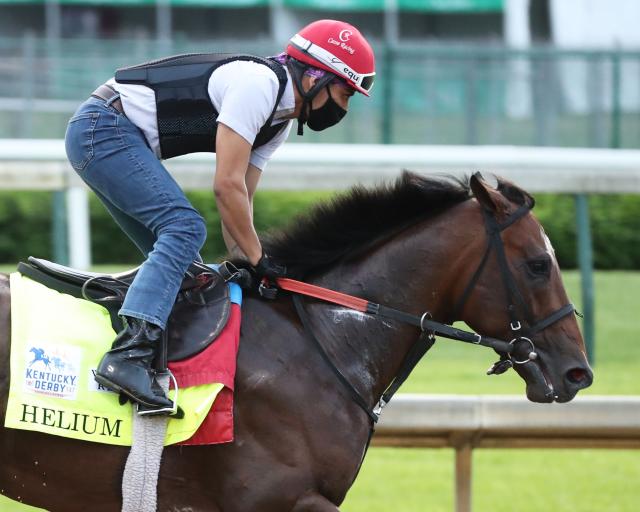