LOUISVILLE, KY (Friday, Sept. 4, 2020) – Michael Dubb, Monomoy Stables, The Elkstone Group and Bethlehem Stables’ Monomoy Girl, the champion female runner of 2018, continued to show her brilliance as she cruised to a 1 ¾-length victory over pacesetting Lady Kate in the 35th running of the $500,000 La Troienne Presented by Oak Grove Racing & Gaming (GI) for fillies and mares.

Trained by Brad Cox and ridden by Florent Geroux, Monomoy Girl covered the mile and a sixteenth on a fast main track in 1:42.14.

Winner of the Kentucky Oaks (GI) and Breeders’ Cup Distaff (GI) during her championship campaign in 2018, Monomoy Girl notched the sixth Grade I victory of her career and boosted her career bankroll to $3,386,818 with Friday’s winner’s share of $300,700.

Lady Kate shot out to an early lead and was quickly joined by Risky Mandate as Monomoy Girl was pushed four wide going into the first turn. On the backstretch, Monomoy Girl settled into third while racing in the clear as Lady Kate produced fractions of :23.43, :46.26 and 1:10.48.

On the far turn, Monomoy Girl began to close in on the leaders and by the eighth pole had collared Lady Kate and drew off to the victory.

Now sporting a record of 14-12-2-0, Monomoy Girl is a 5-year-old Kentucky-bred daughter of Tapizar out of the Henny Hughes mare Drumette.

It was another two lengths back to Saracosa who was followed in order by Vexatious, She’s a Julie, With Dignity and Risky Mandate.

Florent Geroux (winning rider, Monomoy Girl) -- “There was no doubt. She gave us every indication in the morning that she was back at a top level. In the Ruffian, when she beat Vexatious pretty easily and then Vexatious came back and beat Midnight Bisou, it gave us a better line from there. Even if it wasn’t for that, she’s been working extremely well in the morning. There is no doubt she is a champion horse and definitely a horse of a lifetime. “There was a little bit of congestion going into the first turn, but I had a nice outside post. I was never worried. I was on the best horse and we had a great trip. I just had to push the button when she was ready.”

Brad Cox (winning trainer, Monomoy Girl) -- “She’s the only horse I get nervous running. Once I leg up Florent (Geroux) it’s 10 minutes of anxiety. He did have to work on her a little bit to clear off from Lady Kate. She’s a true champion and is able to overcome a four-wide trip into the first turn. She’s the horse of a lifetime. The way she’s trained since the spring, since April, is when she took off.”

Javier Castellano (rider, Lady Kate, second) -- “I love the way she did it today. She broke so well out of the gate and I just let her do her own thing. The good thing is she’ll rate beautifully on the lead. That’s what I was looking for, I know Monomoy Girl was much the best but my filly ran a really good race. I think she was second best today and I’m very satisfied with the way she did it. She ran so good. I had a lot of confidence turning for home but when I saw Monomoy Girl, she went by. I wasn’t disappointed in my filly because she responded too. Everything I asked for, she gave it to me. But Monomoy Girl was much the best.”

Eddie Kenneally (trainer, Lady Kate, second) -- "We were delighted with that. That was a big effort. She didn't get beat very far. It was a good effort. We were delighted, absolutely. Grade 1, that means a lot."

(On Breeders' Cup Distaff?) We'll get with Brad (Anderson), the owner, and we'll come up with a plan, but hopefully so."

Brad Anderson (owner, Lady Kate, second) -- "That was crazy. I'm so proud of her. I thought she was going to stop at the top of the stretch, and she just kept going. Monomoy Girl, come on. We gave her everything she wanted. It's just nice because we had to take our time with her, we've been patient. It's nice to see them finally run their race, get the break you want and get everything you wanted. And here we got beat by a better horse but we ran our race. Grade 1 on our pedigree, stakes-winner last time. That's huge. That's huge for me. That's the most expensive filly I ever bought ($485,000 yearling). And now I can thank my wife for letting me spend that kind of money." 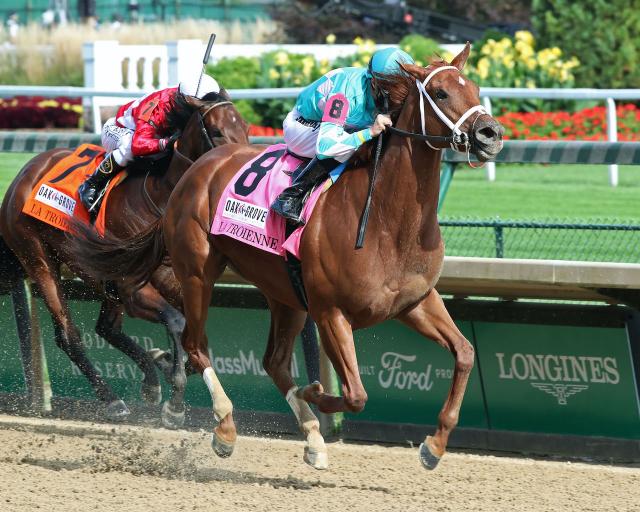