Champion Runhappy 'Better Than He Was a Year Ago'; Returns in Saturday's Ack Ack 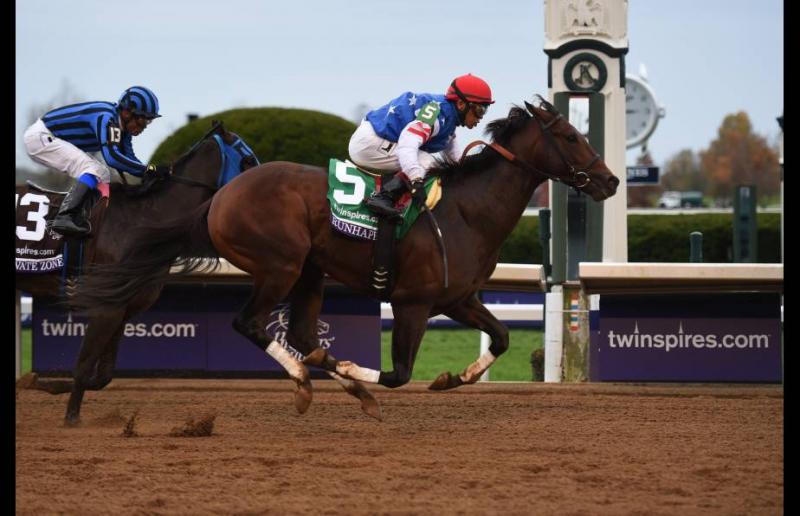 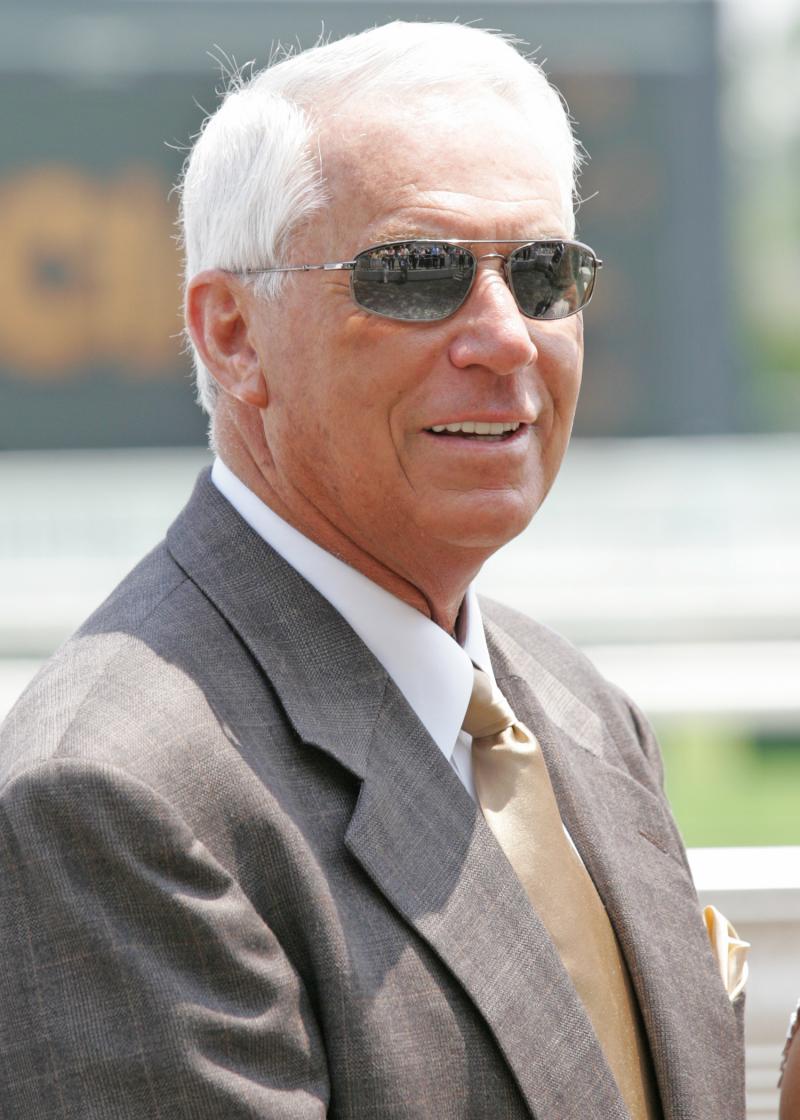 Hall of Fame trainer D. Wayne Lukas will bid to win the race named in his honor Saturday when he saddles Calumet Farm's Natchez in the $175,000 Lukas Classic. (Churchill Downs photo) 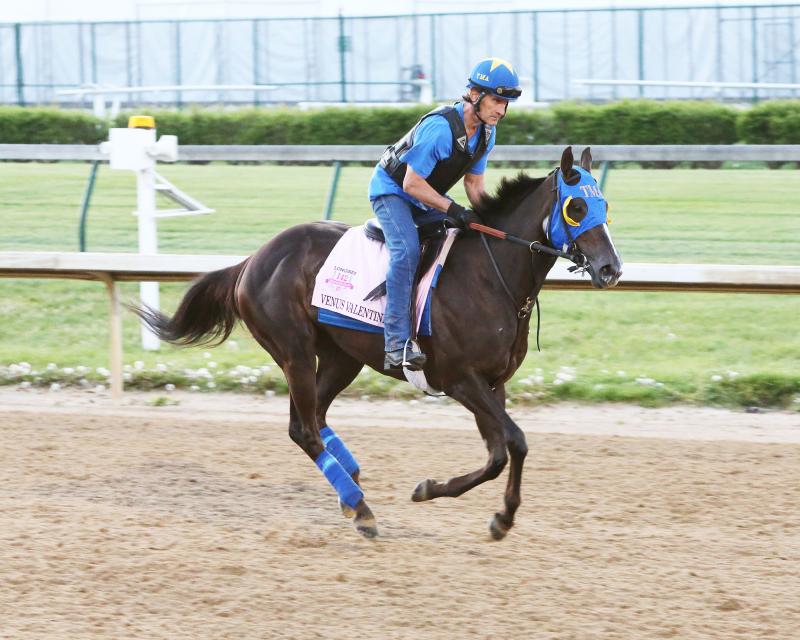 The much-anticipated wait for the return of reigning Champion Sprinter Runhappy ends Saturday when the James McIngvale-owned son of 2010 Kentucky Derby winner Super Saver makes his 4-year-old debut in the $100,000 Ack Ack Presented by TwinSpires.com (Grade III) at Churchill Downs.

Trainer Laura Wohlers believes that her sprinting sensation is coming back better than ever.

“He’s doing so much better than he was a year ago,” Wohlers said. “We’re all very excited. We’ve all been waiting awhile for it. We’ve had our setbacks with him this year but the time off has ended up being good. He’s come back so much stronger than he was last year.”

Such setbacks included a bone bruise on his front right cannon bone which put him on the shelf for 60 days and scrapped plans for a start in Belmont Park’s Metropolitan Handicap (GI) in June. Wohlers admitted to being a little concerned with Runhappy’s comeback but those doubts were put to rest when he resumed training this summer.

“I was a little concerned that he wasn’t prepared enough,” Wohlers said. “But he has been breezing real well and training excellent. With a nine-month layoff you’re always concerned but he’s just been doing so well.”

Runhappy will stretch out to one mile in the Ack Ack, which is his first time beyond seven furlongs since his lone defeat in the one mile and 70 yard Lecomte (GIII) at Fair Grounds as a well-beaten ninth behind International Star.

“He doesn’t look like a typical sprinter,” Wohlers said. “He just has a nice fast stride and I think he’ll handle longer distances very well. In the Lecomte he was still real green, young and kind of figuring things out. But he’s developed very nicely since then. I think that he’s always been so fluid. If you gallop him two miles he doesn’t even take a breath afterwards. He’s got a nice, strong cardiovascular system which is very important to being able to go around two turns.”

“He’s got a good mind and he’s always been a nice-minded horse ever since we bought him. Sometimes he’ll get a little more aggressive during weeks like this when we’re preparing for a big race, but we’re really fortunate to be able to have a horse like this where people can come and visit with him and feed him peppermints because he’s so calm and gentle. We had a little meet and greet with him the week of Breeders’ Cup last year and he was just so mild mannered.”

“I have to give a lot of credit to Cordell,” Wohlers said. “He never loses his temper with these horses and he’s literally been with this horse pretty much every day since October 2014. He’s at the barn all the time and so the more you interact with the horse, the calmer and more trusting he’ll be with you.”

Anderson, who started out as a groom in his native Trelawny, Jamaica, recalled the first time he laid eyes on Runhappy.

“I remember seeing him come off the trailer (at the Thoroughbred Training Center) and I said to myself, ‘Wow, this horse is a classic. He’s either Derby or Breeders’ Cup,’” Anderson said. “I saw something and thought that he had something written all over him. Runhappy is a good-minded horse and loves to run. I’m just here to help him along. I keep his confidence and keep him going strong.

“I am a calm person. I learned when I started working with horses in Jamaica that when you stay calm with a horse, they’re happy and have a good attitude and a good mind. I just think that God made me like that.”

Edgar Prado, who guided Runhappy to his career highlighted victory in last year’s Breeders’ Cup Sprint, will return to the saddle on Saturday.

LUKAS TAKES A SHOT AT HIS NAMESAKE WITH LONGSHOT NATCHEZ – Hall of Fame trainer D. Wayne Lukas has won almost every prestigious race in North America on numerous occasions, but will attempt to land his first win in a race named in his honor when he sends out the Calumet Farm-owned Natchez in Saturday’s $175,000 Lukas Classic at Churchill Downs, a 1 1/8-mile event run for 3-year-olds and up on the main track.

“That’d be fun,” said Lukas, a four-time Kentucky Derby-winning trainer. “I’m kind of wanting to be a part of it so I put (Natchez) in there. I think he’s going to run well, but I hope that race grows in stature and get to be a graded stakes someday and it’s humbling and nice thing to know that there’s one out there with my name on it.”

The 4-year-old son of Quality Road last ran in the Bernard Baruch (GII) at Saratoga on Labor Day, where he was a well-beaten ninth and last. He’ll be looking for his first trip to the winner’s circle since an allowance victory at Oaklawn Park on April 16.

“He’s an in-and-out horse,” Lukas said. “When he brings his A-game and when he really lays it down, he runs well. He had a couple of races at Hot Springs – one of them especially – that were really strong, but his consistency isn’t that much. He likes this racetrack here really well though. I thought he may have struggled a little bit up at Saratoga but I think he’ll like this a lot better so we’ll see what happens. It won’t be an easy spot for him.”

Formerly known as the Homecoming Classic, Churchill Downs renamed the now 4-year-old race in honor of “The Coach” last year, which Lukas admits he was surprised with.

“It was very surprising … I thought that they only did that after you’re gone,” Lukas said with a laugh. “I was surprised and it was a humbling honor and it’s very gratifying to know that we’re going to have a race, at least for a while, with my name on it.”

Hall of Fame jockey Calvin Borel, who will be looking for his first Thoroughbred stakes victory since coming out of a brief retirement, has the mount. Last Saturday he scored a victory in the President of the United Arab Emirates Cup (GI) for Arabians aboard Paddys Day.

The son of More Than Ready broke his maiden on the fourth attempt last time out, which was his second start for Bradley after switching barns from New York-based Leah Gyarmati

“He’s doing well and ready to come in,” Bradley said. “The owners (Tom Keithley’s Gunpowder Farms LLC) are coming in for it since they have two others in that day (Nawlins Kitty in Race 3 and Breaking Lucky in the $175,000 Lukas Classic, which goes as Race 9) so they’re ready. It’s 3-year-olds so we know he likes the turf course. That’s the main reason we’re here.”

Shaun Bridgmohan, who was aboard for Barahona’s maiden win, returns to the saddle Saturday.

VENUS VALENTINE MAKES COMEBACK IN FRIDAY ALLOWANCE – Rosemont Farm LLC’s Venus Valentine is scheduled to make her first start since a 12th-place finish in the Longines Kentucky Oaks (Grade I) on May 4 in Friday’s ninth race at Churchill Downs, a 1 1/16-mile allowance optional claiming event on the Matt Winn Turf Course.

The 3-year-old daughter of Congrats is most well-known for lighting up the Fair Grounds tote board at odds of 74-1 in the Feb. 20 Rachel Alexandra (GII). Prior to her upset stakes win, she made her lone start on the grass, where she was a close fourth beaten 2 ¾ lengths in an allowance race at Fair Grounds.

“Venus Valentine never had anything wrong with her physically. We just gave her time off after a hard campaign,” trainer Tom Amoss said. “She’s been on the grass once in New Orleans and sat behind a very slow pace and actually finished up well so we’re encouraged by her performance on the grass so we’re trying it again. I think she’s pace dependent. I think the more pace in the race the better off it will be for us.”

Jockey Corey Lanerie has the mount on Friday.

DOWN THE STRETCH – Thursday’s Single 6 Jackpot carryover is $55,573 for the sequence that covers Races 3-8 starting at 5:58 p.m. … Today is the final “Twilight Thursday” of the year at Churchill Downs with a first race post time of 5 p.m. … Post time for Friday, Saturday and closing day Sunday is 12:45 p.m. … Heading into the final four days of the September Meet, Robby Albarado had a 10-7 lead over Brian Hernandez Jr. and Corey Lanerie in the jockey standings for most wins. Albarado hopes to land his second Churchill Downs riding crown. His lone local title came during the 2008 Spring Meet. … Kenny McPeek and Dale Romans are tied atop the trainer standings with four wins, while Steve Asmussen, Keith Bourgeois, “Buff” Bradley and Chris Hartman have three wins apiece. … Clifford J. Grum, Tom Keithley’s Gunpowder Farms LLC and Terry Finley’s West Point Thoroughbreds LLC have two wins each to lead the owner standings.