Set Piece (GB) arrived in the United States two years ago to the care of multiple Eclipse Award-winning trainer Brad Cox and since then owner Juddmonte has been rewarded with seven victories. The one missing link in Set Piece’s résumé is a Grade I win but Cox hopes that could change in Saturday’s $1 million Arlington Million (Grade I) at Churchill Downs.

Set Piece recorded seven of his 10 lifetime victories in the barn of Cox, most notably winning last year’s $250,000 Wise Dan (GII) by a half-length over Somelikeithotbrown. The son of Dansili (GB) came 1 ½ lengths from Grade I glory in last year’s $500,000 Fourstardave Handicap (GI) at Saratoga but was defeated by the sensational mare Got Stormy.

“He’s been training very well up at Saratoga and we were between running him back in this year’s Fourstardave or going back to Churchill for the Arlington Million,” Cox said. “He’s had a lot of success at Churchill and hopefully on Saturday he can add a Grade I win to his résumé.”

In his last start, Set Piece finished a disappointing fifth in the $175,000 Forbidden Apple (GIII) as the 2-1 betting favorite. Through 15 starts with Cox, Set Piece has gone to post as the favorite 10 times. Set Piece was made the 4-1 third choice by morning line oddsmaker Mike Battaglia in the Arlington Million.

The Arlington Million will be conducted in Lane 1 on the Matt Winn Turf Course.

Thanks to cooperation from Ellis Park, the Kentucky Horse Racing Commission and Kentucky horsemen, the 1 1/8-mile Arlington Million, which annually attracts some of the nation’s elite turf stars age 3-years-old and up, will be staged at Churchill Downs for the first time in a special stand-alone, one-day, summertime event at the historic Louisville racetrack. Previously, it was run at Arlington Park until the racetrack closed in 2021.

Saturday will mark only the fifth time in Churchill Downs’ 148-year history that racing at the home of the Kentucky Derby will take place in August. In 1983-84, Churchill Downs hosted extended 93-day Spring Meets that ran from late April through Labor Day. The famed track also hosted Fall Meets in 1895 and 1922 that began on Aug. 24 and Aug. 30, respectively. (Editor’s note: the Churchill Downs communications team inadvertently left out the 1895 and 1922 meets in Tuesday’s Arlington Million advance).

Wagering is available for the Arlington Million and every race from Churchill Downs on www.TwinSpires.com, the official wagering provider of Churchill Downs Inc. and the Kentucky Derby.

PRINCESS GRACE COULD CAP BIG WEEK FOR DAM MASQUERADE IN BEVERLY D. – It’s already been a successful week for owners Susan and John Moore as their homebred 3-year-old colt Catnip broke his maiden impressively Tuesday at Colonial Downs. Now, the Moore family could complete a double Saturday with Catnip’s half-sister Princess Grace as one of the top choices in the $500,000 Beverly D. (Grade I) at Churchill Downs.

The Mike Stidham-trained Princess Grace, by Karakontie (JPN), is out of the Moore’s dam Masquerade. Stidham campaigned Masquerade for four of her six lifetime victories and jockey Florent Geroux, who will ride Princess Grace in the Beverly D., piloted the Silent Name (JPN) mare for two wins.

Princess Grace, a seven-time winner from 11 starts, won the last two runnings of the $200,000 Dr. James Penny Memorial Stakes (GIII) at Parx. Geroux was aboard Princess Grace for her win in the 1 1/16-mile turf event four weeks ago.

“You can tell she’s really matured over the winter and the Stidhams have done a good job getting her back to the races,” Geroux said after her three-length win. “She gets very comfortable on the front end when she’s able to make the lead but she’s pretty versatile and can come from off the pace, too.”

The 36-year-old Geroux is no stranger to success in the Beverly D. The French-born rider won the 2015 edition aboard the Chad Brown-trained and Martin Schwartz-owned Sea Calisi (FR).

The Beverly D. is part of the Breeders’ Cup “Win and You’re In” series. The winning horse will get an automatic berth into the $2 million Filly & Mare Turf (GI), which will be held Nov. 5 at Keeneland Race Course.

The Beverly D. will be run in Lane 3 on the Matt Winn Turf Course, 24 feet from the inside rail.

SATURDAY’S RACES TO BE TELEVISED ON FOX SPORTS’ SARATOGA LIVE – All races from Saturday’s special Arlington Million Day card at Churchill Downs will be televised live as part of NYRA and FOX Sports’ Saratoga Live programming on FS1 from 12:30-3 p.m., FS2 from 3-6 p.m. and FS1 from 6-7 p.m. Paul Lo Duca will serve as the onsite reporter and analyst.

For more information, go to www.churchilldowns.com/calendar/2022-08-13.

Tickets for general admission and first floor seating are $14. Reserved seating starts at $17 and reserved dining starts at $82. To purchase tickets, visit www.churchilldowns.com/tickets. 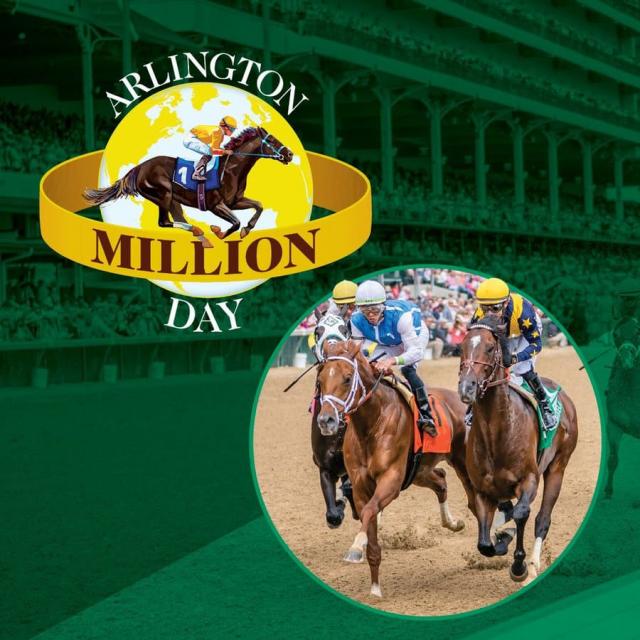