“I live for moments like this,” Abrego said. “These horses are my life; they mean everything to me.”

Cox’s historic Breeders’ Cup weekend began Friday when Michael Dubb, The Elkstone Group, Madaket Stables and Bethlehem Stables’ British Idiom wore down favored Donna Veloce to win the Juvenile Fillies by a neck. The next day, LNJ Foxwoods’ crack sprinter Covfefe held off the late charge of Bellafina by three-quarters of a length to win the Filly and Mare Sprint. Both victories likely locked up season-ending championship honors for Cox’s fillies.

“It was a very special weekend for our entire barn,” Cox said. “I feel like they are both champions after that. We came to California with five Breeders’ Cup chances and won two – I’d say that’s a pretty good weekend.”

“This horse is simply unbelievable,” Santana said. “Once he sees a hole to go through he takes off like you’d never believe. He gets so determined on the racetrack to win. That’s what makes him so special. It was an unbelievable day.”

GEROUX SET TO RETURN FROM BROKEN STERNUM – Veteran rider Florent Geroux was back working horses Wednesday morning at Churchill Downs and is scheduled to return to the races on Saturday after suffering a broken sternum three weeks ago during a training mishap at Keeneland.

“I’m just very thankful it wasn’t worse,” said Geroux, who worked as an on-air analyst for a French television station during this year’s Breeders’ Cup. “It felt good to get back riding this morning and get back to work. It was a bummer to miss riding at the Breeders’ Cup but I’ll be back next year.”

Geroux has three calls for Saturday’s card at Churchill Downs.

Owned by Albaugh Family Stables, Dennis’ Moment stumbled badly out of the gate in the Juvenile and was distanced throughout the race.

“This game is full of ups and downs and that was probably our lowest point,” Albaugh Family Stables’ racing manager Jason Loutsch said.

Dennis’ Moment returned to Churchill Downs on Saturday and the team originally stated he’d receive a 45-day layoff until his 3-year-old season.

The $200,000 Iroquois Stakes (GIII) winner was not the only horse in the Breeders’ Cup Juvenile who didn’t handle the race well. Joseph Sutton’s Iroquois runner-up Scabbard returned to Churchill Downs following his fourth-place effort in the Juvenile.

“No one was able to close on that surface,” trainer Eddie Kenneally said. “The track played weird for a lot of horses out there.”

DOWN THE STRETCH – Racing continues Wednesday for a five-day week beneath the Twin Spires with a daily first post of 1 p.m. (all times Eastern). Wednesday’s 10-race card has a $1,621 carryover in the $1 Super Hi 5 in Race 10. … On Sunday, Churchill Downs will celebrate Military Appreciation Day. We invite any active military or veterans to enjoy a day at the races with a special discounted ticket to Millionaires Row for $29. A portion of the ticket sales will benefit Supplies Over Seas, a locally-based nonprofit organization that has delivered supplies to 105 countries around the world. For more information and to purchase tickets, visit www.tiketmaster.com/military and use the offer code FTKNOX. … “Inside Churchill Downs” will return to the airwaves Friday at 6 p.m. on ESPN 680/105.7. Those outside the Louisville area can listen live on www.espnlouisville.com. … Celebrating birthdays this week at Churchill Downs: jockey Miguel Mena (Wednesday, 33-years-old); jockey Calvin Borel (Thursday, 53); trainer Mike Johnson (Thursday, 43); and paddock blacksmith Dennis Evinger (Thursday, 77). … Entering Wednesday’s card at Churchill Downs, Randy Morse was two wins away from 1,000-career victories. He had one entry on Wednesday: Wrath (Race 8, 12-1). … Trainer Mike Maker is two wins away from 400-career victories at Churchill Downs. He has no entries on Wednesday. 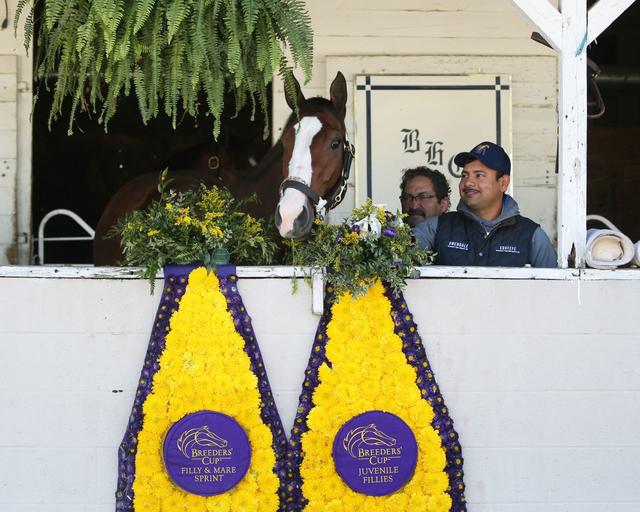