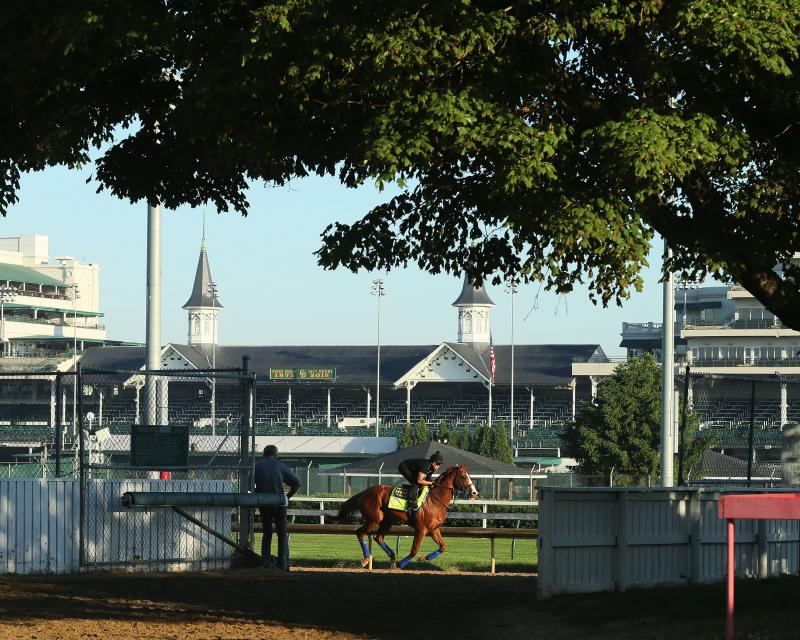 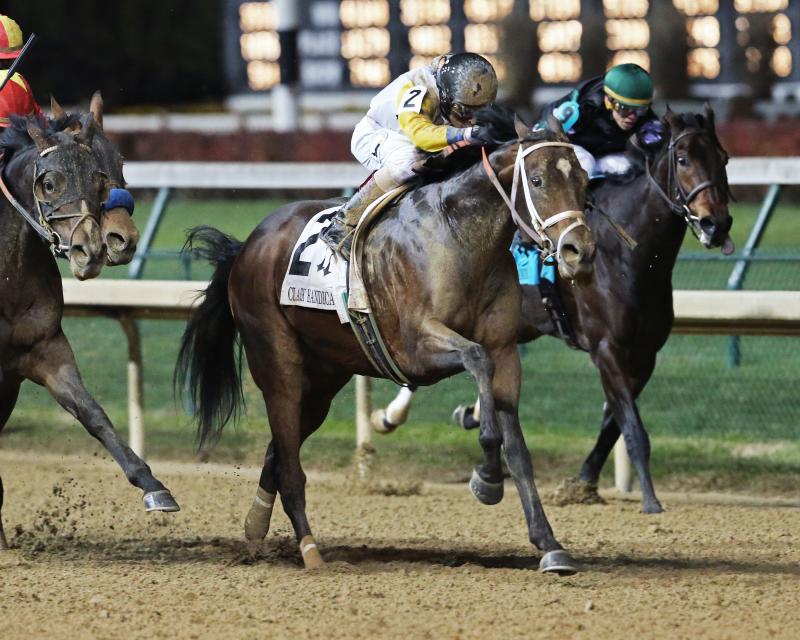 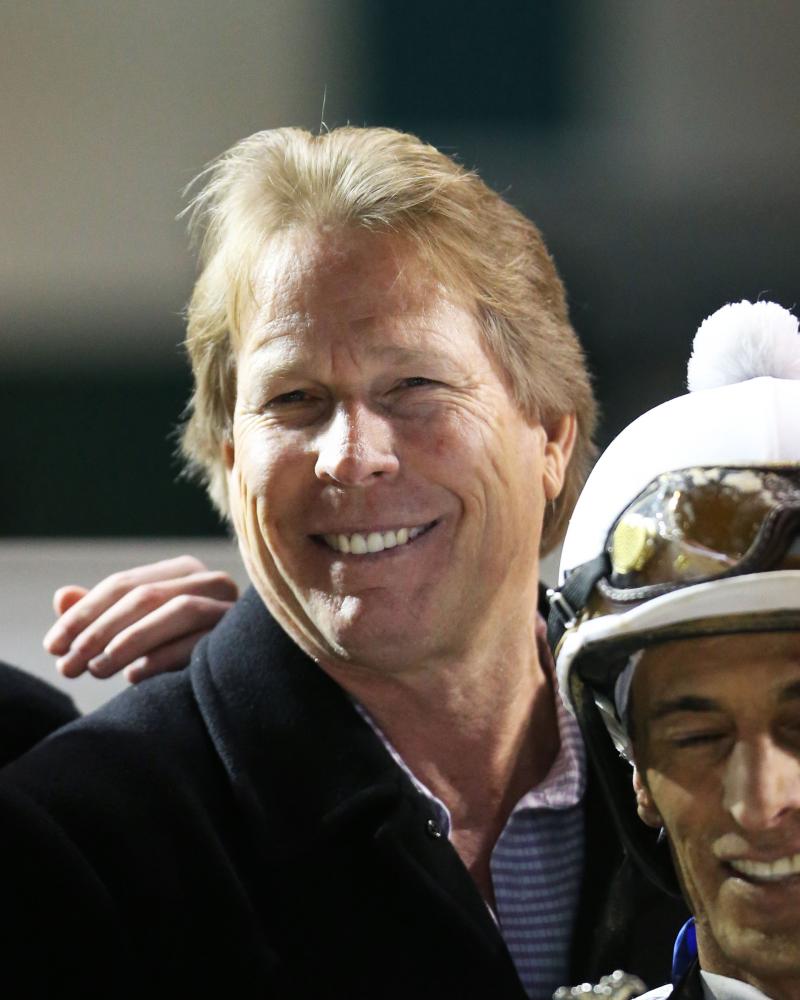 Kentucky Derby (Grade I) and Preakness (GI) winner Justify continued his training Friday morning at Churchill Downs with a 1 ½-mile gallop under Humberto Gomez in preparation for the third jewel of racing’s Triple Crown – the June 9 Belmont Stakes (GI).

“It was a very good morning,” Hall of Fame trainer Bob Baffert’s chief assistant Jimmy Barnes said. “We did exactly what Bob wanted us to do. He galloped a little bit further today but he told us, once again, to take it easy with him. It’s nice to gallop out there all alone. We wanted him to go an easy pace and he was able to do so without any traffic.”

Also training Friday during the exclusive window from 7:30-7:40 a.m. (all times Eastern) for horses preparing for the Belmont Stakes were Preakness runner-up Bravazo, who galloped 1 ½ miles with exercise rider Danielle Rosier aboard for Hall of Fame trainer D. Wayne Lukas, and Preakness third Tenfold, who galloped about 1 ½ miles with Angel Garcia for fellow Hall of Fame conditioner Steve Asmussen.

“We can’t just let Justify have it,” Lukas joked after watching Bravazo inch closer to Justify during their gallops. “(Bravazo) bounced out of the Preakness in great shape. Justify is the real deal but my horse is very talented as well. I don’t think there is any issue with him going 1 ½ miles. It’s a test to every horse in the race because no one has done that before.”

Baffert is expected to be at Churchill Downs later this weekend or early next week, according to Barnes. Justify is scheduled to fly to Belmont from Louisville on Wednesday, June 6.

Justify’s Friday morning gallop can be viewed online at https://www.youtube.com/watch?v=FXaKmW7py5E

Complementary Belmont Stakes past performances, courtesy of Brisnet.com, can be viewed online at http://www.brisnet.com/wp-content/uploads/2018/05/BelmontStakes18.pdf.

Area horse racing fans are invited to watch those colts train from the first floor of the facility free of charge. Churchill Downs Racetrack will open its Paddock Gate entrance between 7-8 a.m. so the public can watch Kentucky Derby and Preakness winner Justify along with rivals Bravazo, Free Drop Billy, Restoring Hope and Tenfold prepare for the 1 ½-mile third jewel of horse racing’s Triple Crown – the 150th running of the $1.5 million Belmont Stakes (Grade I) on Saturday, June 9.

Video of the exercises will be shown on the Big Board and infield video screens at Churchill Downs. Those unable to attend can watch an online live stream of the daily exercises with commentary at www.KentuckyDerby.com/Works from 7:20-7:45 a.m., thanks to TwinSpires.com, the country’s leading online and mobile betting platform and official betting partner of Churchill Downs, the Kentucky Derby and Breeders’ Cup World Championships. Also, clips of the activity will be uploaded on the Kentucky Derby YouTube channel.

SEEKING THE SOUL ‘KEEPING THE BREEDERS’ CUP IN FOCUS’ – Charles Fipke’s homebred Seeking the Soul has been freshened since finishing fifth in the $16 million Pegasus World Cup (Grade I) on Jan. 27 but the locally-based son of Perfect Soul (IRE) is keeping his sights on the Nov. 3 $6 million Breeders’ Cup Classic at Churchill Downs, according to trainer Dallas Stewart.

“He’s doing really good,” Stewart said. “He’s only had one work back so far but he’s been training great. We’re keeping the Breeders’ Cup in focus and working backwards from there. We’ll try to have three starts before then if the timing works out.”

The 6-year-old horse is on target to breeze later this weekend.

“We entered her in the Prairie Rose Stakes at Prairie Meadows but scratched to keep her home for the Winning Colors,” trainer Rusty Arnold II’s assistant Jack Bohannon said. “I like our spot Saturday. She ran a really good race a couple weeks ago over this track and hopefully we can get some black-type in her past performances.”

The Keertana was named for Barbara Hunter’s homebred Keertana, who won four of her nine starts at Churchill Downs, including a nose triumph over males in the $111,200 Louisville Handicap (Grade III) in 2011.

A former $35,000 claim in 2016 for the Ramseys and trainer Mike Maker, Daring Duchess won the 2017 Keertana by three lengths. Jockey Corey Lanerie has the call on the five-time winner and will break from Post 2.

DOWN THE STRETCH – Racing continues Friday at Churchill Downs with a nine-race program that gets underway at 12:45 p.m. (all times Eastern). Friday’s card is highlighted by a $471,168 carryover in the 20-cent Single 6 Jackpot that begins in Race 4 with a scheduled post time of 2:13 p.m. Also, there is a $3,126 carryover in the $1 Super Hi-5 in Race 9 at 4:55 p.m. … Racing continues through Monday this week at Churchill Downs with a 12:45 p.m. first post each day. In celebration of Memorial Day on Monday, all active and retired members of the United States armed forces will be admitted free of charge. Also, Churchill Downs’ bugler Steve Buttleman will perform patriotic melodies following the “Call to the Post” for each race. … “Inside Churchill Downs” will air Friday at 6 p.m. on ESPN 680/105.7. The one-hour horse racing radio show is co-hosted by Churchill Downs Racetrack’s John Asher, Darren Rogers and Kevin Kerstein and will feature Hall of Fame trainer Bob Baffert’s assistant Jimmy Barnes and Longines Kentucky Oaks (GI) winning trainer Brad Cox. Those outside the Louisville radio market can listen live online at http://www.espnlouisville.com/ or via podcast on the station’s website or https://soundcloud.com/. 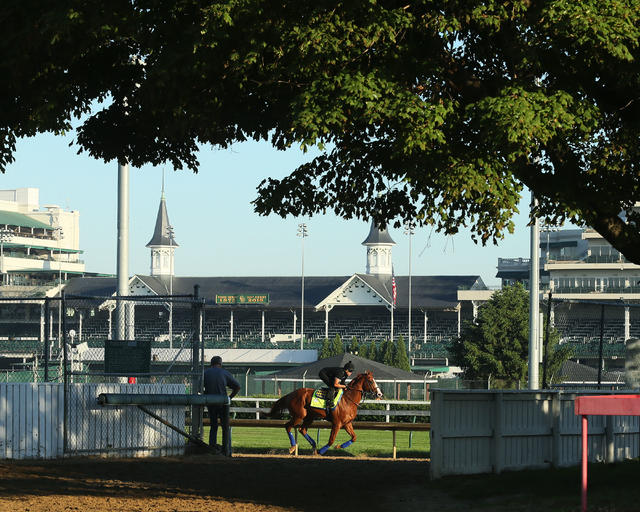