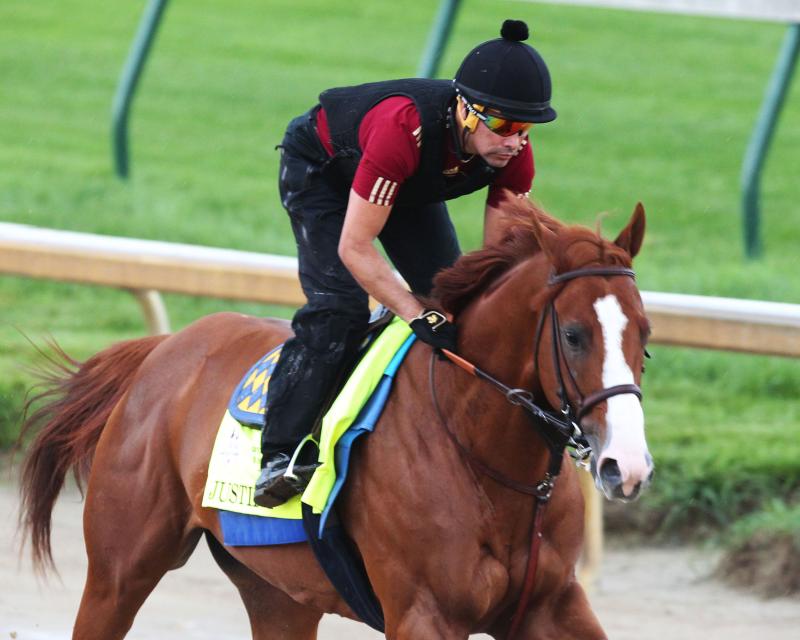 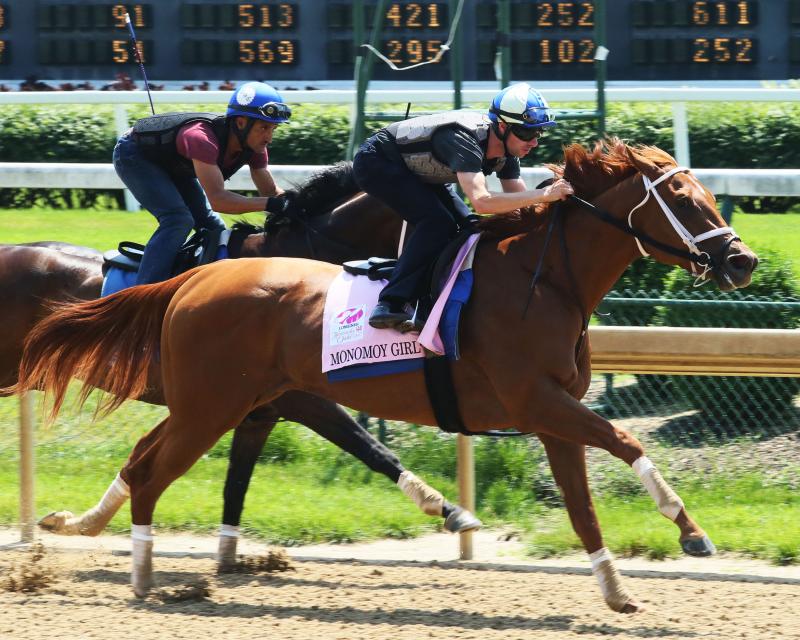 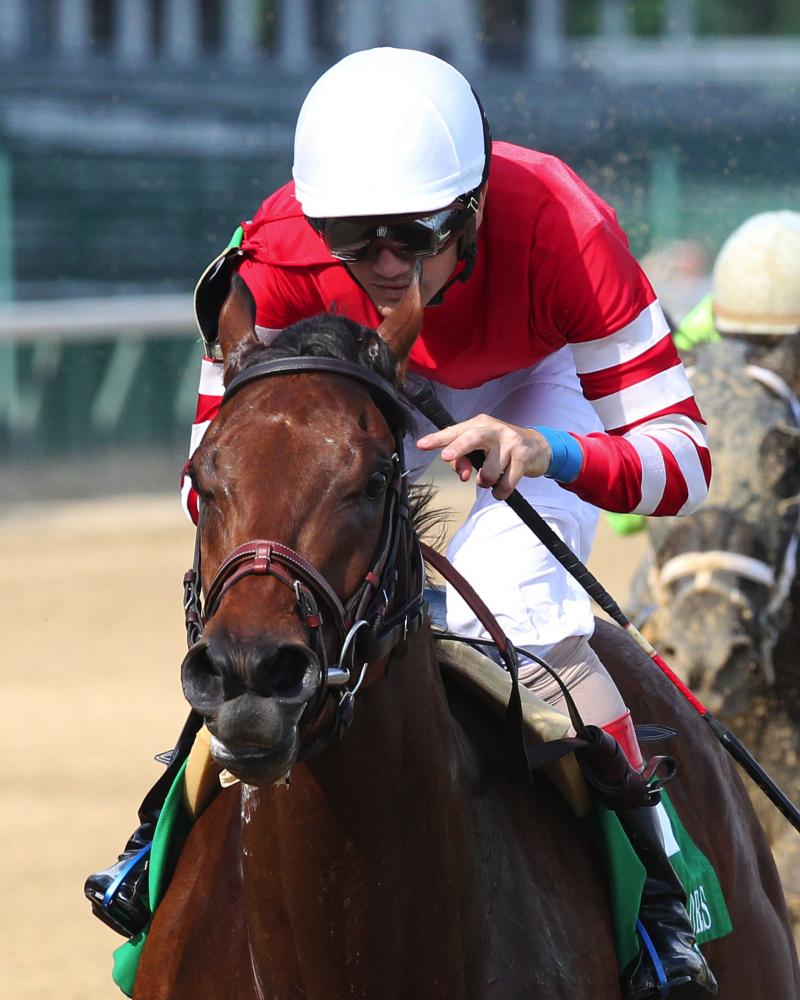 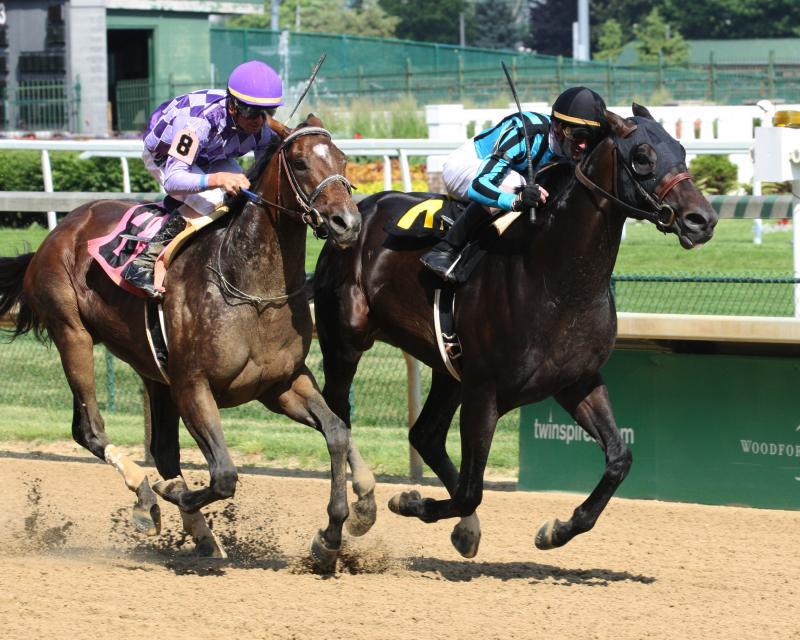 With a heavy downpour overnight in Louisville, Hall of Fame trainer Bob Baffert’s assistant Jimmy Barnes slightly adjusted the plans for undefeated Kentucky Derby (Grade I) and Preakness (GI) winner Justify on Sunday morning at Churchill Downs as the colt continued his training for the June 9 Belmont Stakes (GI) with a 1 1/8-mile gallop under exercise rider Humberto Gomez aboard.

“With the mud, we just jogged him straight off to begin his training,” Barnes said. “He then galloped about 1 1/8 miles but did everything well. We just didn’t want to do too much with him over the track condition.”

Baffert is expected to return to Churchill Downs on Monday morning to watch Justify train.

Justify is no stranger to running in the mud after winning both the Kentucky Derby and Preakness over a “sloppy” surface.

“He’s very good on a dry track as well but unfortunately we’ve just been catching wet surfaces,” Barnes said. “I’ve seen him run on a dry surface and I definitely like what I saw.”

Also training Sunday during the exclusive 7:30-7:40 a.m. (all times Eastern) training window for horses preparing for the Belmont Stakes were Preakness runner-up Bravazo, who jogged two miles with exercise rider Danielle Rosier aboard for Hall of Fame trainer D. Wayne Lukas, and Preakness third Tenfold, who galloped about 1 3/8 miles with Angel Garcia for fellow Hall of Fame conditioner Steve Asmussen.

Other Belmont Stakes possible contenders based at Churchill Downs are Albaugh Family Stables’ Breeders’ Futurity (GI) winner Free Drop Billy, who is now scheduled to breeze Monday morning after the overnight rain in Louisville, and Wood Memorial (GI) third Restoring Hope, who could breeze Monday or Tuesday while Baffert is in town.

For complementary past performances of the Belmont Stakes contenders courtesy of Brisnet.com: http://www.brisnet.com/wp-content/uploads/2018/05/BelmontStakes18.pdf.

Area horse racing fans are invited to watch those colts train from the first floor of the facility free of charge. Churchill Downs Racetrack will open its Paddock Gate entrance between 7-8 a.m. each morning through Monday, June 4 so the public can watch Kentucky Derby and Preakness winner Justify along with rivals Bravazo, Free Drop Billy, Restoring Hope and Tenfold prepare for the 1 ½-mile third jewel of horse racing’s Triple Crown – the 150th running of the $1.5 million Belmont Stakes (Grade I) on Saturday, June 9.

Video of the exercises will be shown on the Big Board and infield video screens at Churchill Downs. Those unable to attend can watch an online live stream of the daily exercises with commentary on the Kentucky Derby Facebook (www.facebook.com/KentuckyDerby), Twitter (www.twitter.com/kentuckyderby) and at www.KentuckyDerby.com/Works from 7:20-7:45 a.m. through Monday, June 4, thanks to TwinSpires.com, the country’s leading online and mobile betting platform and official betting partner of Churchill Downs, the Kentucky Derby and Breeders’ Cup World Championships. Also, clips of the activity will be uploaded on the Kentucky Derby YouTube channel.

OAKS WINNER MONOMOY GIRL BREEZES FIVE FURLONGS IN :59.40 BEFORE SUNDAY OPENER – Longines Kentucky Oaks (Grade I) winner Monomoy Girl was originally scheduled to breeze Sunday morning at 7:30 a.m. (all times Eastern) at Churchill Downs but when overnight rain left the track “muddy,” the multiple Grade I winning filly was permitted to work five furlongs in :59.40 over a “fast” surface at 12:15 p.m. prior to the first race.

“It was a really solid work,” Cox said. “It was exactly what we were looking for. We really wanted to keep her on a schedule with 13 days out from the race. We could’ve breezed her on the mud this morning but it would’ve been more of a maintenance work and I wanted to do something a little more with her. The track was better this afternoon and she did it the right way. If she can keep putting things together in the afternoon as she does in the morning training she’ll be tough in the Acorn.”

“The horse she breezed with is pretty nice,” Geroux said. “She did everything really well and worked easy. She got by (Dazzling Gem) with no problem and galloped out well.”

“I still pinch myself that we actually won the Oaks,” Louisville native Cox said. “I’m so proud of our whole team and this filly. She’s the real deal.”

“She came out of things in really good shape,” Bohannon said Sunday morning. “We haven’t quite decided what we’ll do with her yet. We’ll take it day by day but the Roxelana could be an option that would make a lot of sense.”

Miss Kentucky, a five-time winner by Blame out of Madden’s mare Champagne Taste, battled with heavy favorite Golden Mischief in the mid-stage of the Winning Colors and held off the late charge of Treble to garner her first graded stakes win.

The 4-year-old filly paid $9.20 as the second choice in the field of six and stopped the clock in 1:10.35 for six furlongs over the fast main track.

“He definitely impressed us all today,” Tomlinson said. “The goal has been the Matt Winn with this colt. I wanted to get a two-turn race to fill for him but after his win at Keeneland in April, the two-turn race in the condition book would have been too quick. Ultimately, we had to run him seven furlongs but I think he showed he should be able to go a route of ground.”

“I had to ride him a bit but he really dug back in a tried hard,” Rocco said. “I think he could be a good one.”

Nominations for all five stakes races on June 16 close June 2. Nominations can be made at: https://www.churchilldowns.com/horsemen/stakes/nomination-forms/.

STAKES PROBABLES – Saturday’s 11-race card at Churchill Downs features the 30th running of the Grade III, $100,000 Aristides for 3-year-olds and up at six furlongs on the main track and the third running of the $70,000-added Mighty Beau Overnight Stakes at five furlongs on the turf. Both races will be drawn Wednesday. Known Aristides probable entrants include Awesome Saturday, Chief Cicatriz, Mr. Crow, Shadow Tracer and Wilbo.

DOWN THE STRETCH – Racing continues Sunday at Churchill Downs with a massive $636,166 carryover in the 20-cent Single 6 Jackpot that gets underway in Race 4 at 2:13 p.m. (all times Eastern). First post of the nine-race program is 12:45 p.m. … In honor of Memorial Day on Monday, all active and retired members of the United States armed forces will be admitted free of charge. Also, Churchill Downs’ bugler Steve Buttleman will perform patriotic melodies following the “Call to the Post” for each race. 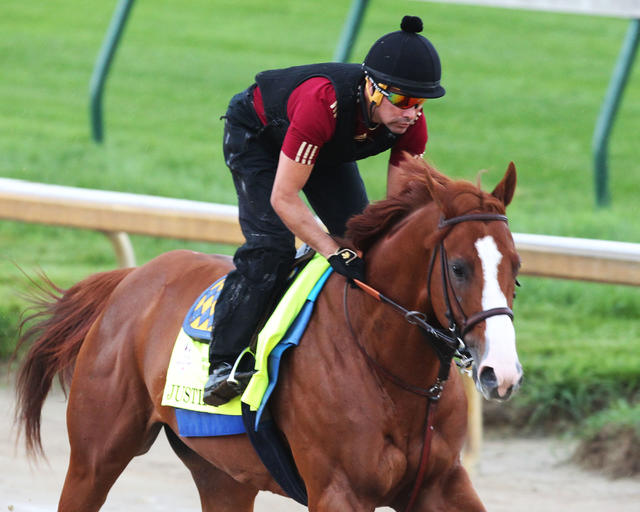