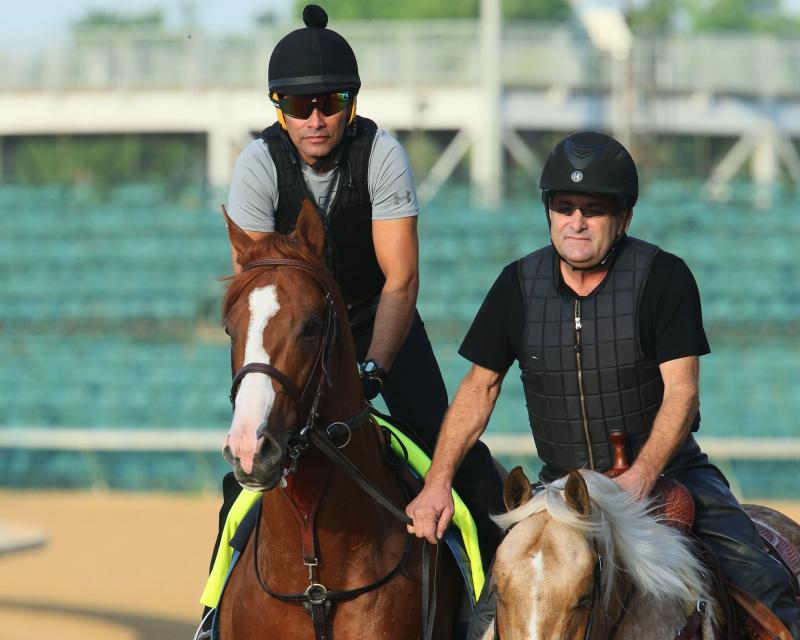 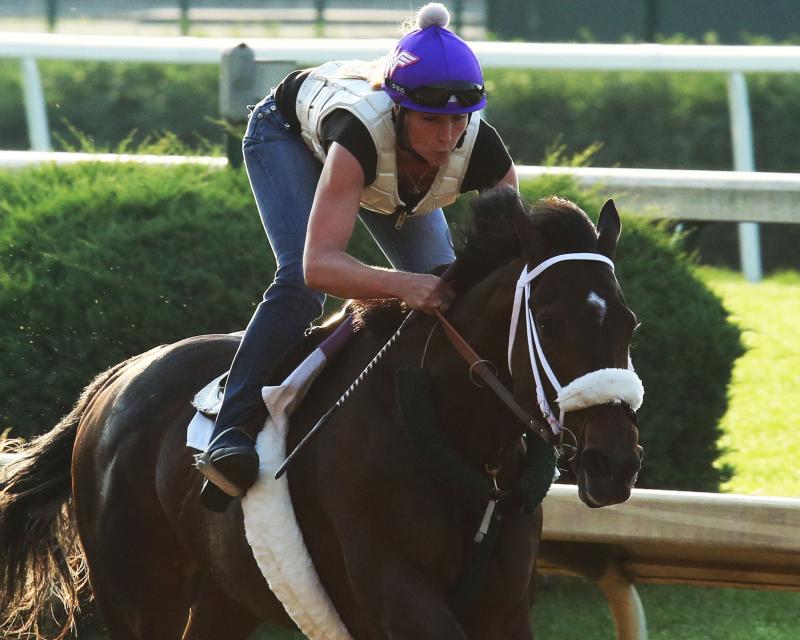 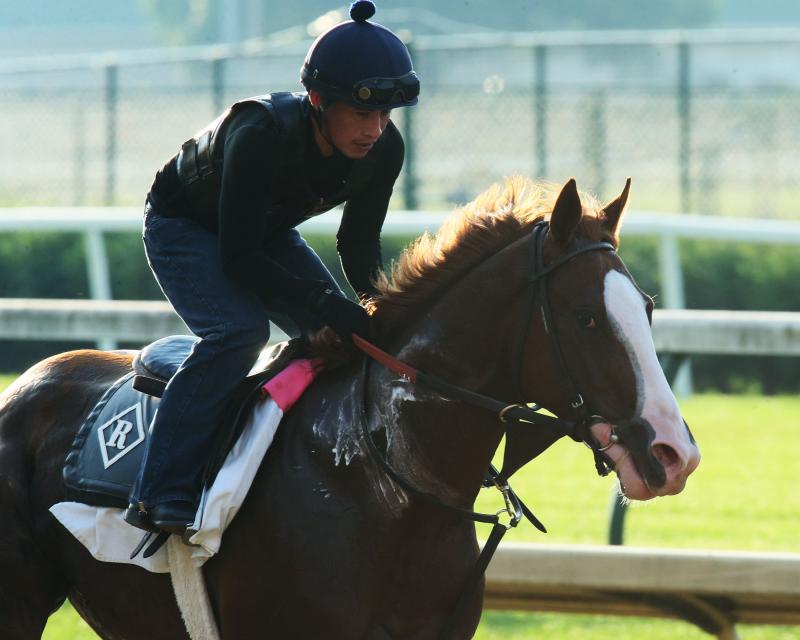 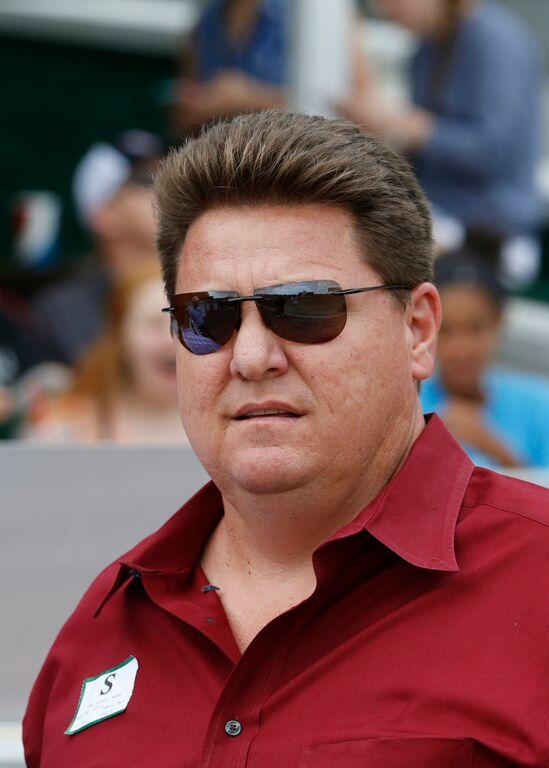 Trainer Chris Hartman will seek a record -tying third victory in the $100,000 Aristides (GIII) when he saddles favored Wilbe in the six-furlong race on Saturday night at Churchill Downs. (Coady Photography/Churchill Downs) 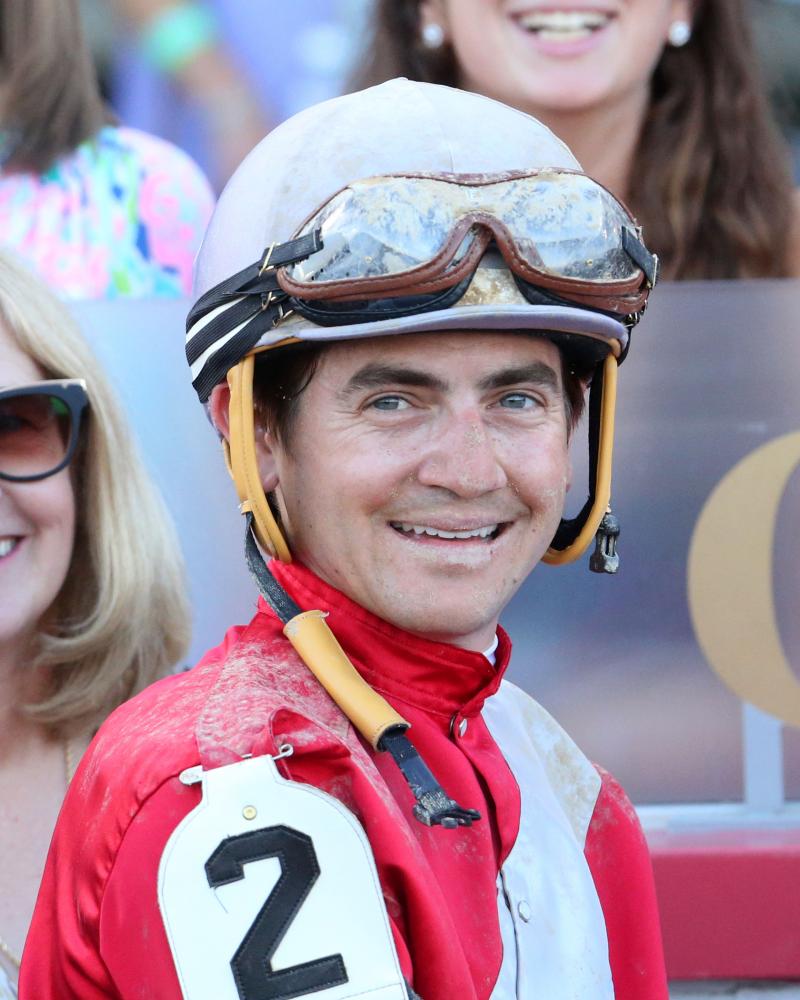 Brian Hernandez Jr. holds a 28-22 lead over Corey Lanerie in the battle for leading jockey of the Spring Meet heading into the Twilight Thursday program. (Coady Photography/Churchill Downs)

Undefeated Kentucky Derby (Grade I) and Preakness Stakes (GI) winner Justify returned to the Churchill Downs racetrack Thursday morning for a one-mile jog following his half-mile breeze in :46.80 Tuesday as he continued training for the 1 ½-mile Belmont Stakes (GI) on June 9.

“It was a really good first day back at the track,” trainer Bob Baffert’s assistant Jimmy Barnes said. “He was pretty strong out there and full of himself. It was exactly what we wanted to see after his breeze Tuesday.”

Baffert, who was in town for Tuesday’s workout, is scheduled to return to Louisville from his Southern California base Saturday or Sunday. The 65-year-old conditioner said Tuesday Justify could possibly breeze Monday.

“I was very pleased with the work,” Lukas said. “With workouts, I’m not really looking at the time but rather how they’re doing it. He did everything we asked. You have to be a tough horse to compete in the Triple Crown series and I think we have a tough horse. He didn’t really get a whole lot of fitness from the Louisiana Derby to the Kentucky Derby with the time between races. I think the Derby made him a lot more fit and that’s part of the reason he did so well in the Preakness.”

Other locally-based Belmont Stakes contenders out for exercise during the exclusive 7:30 a.m. training window were Preakness third-place finisher Tenfold, who galloped about 1 ½ miles with Angel Garcia up for Hall of Fame trainer Steve Asmussen, and Breeders’ Futurity (GI) winner Free Drop Billy, who galloped about 1 ½ miles with Juan Segundo in the saddle for Churchill Downs’ all-time leading trainer Dale Romans.

Area horse racing fans are invited to watch those colts train from the first floor of the facility free of charge. Churchill Downs Racetrack will open its Paddock Gate entrance between 7-8 a.m. each morning so the public can watch Kentucky Derby and Preakness winner Justify along with rivals Bravazo, Free Drop Billy, Restoring Hope and Tenfold prepare for the 1 ½-mile third jewel of horse racing’s Triple Crown – the 150th running of the $1.5 million Belmont Stakes (Grade I) on Saturday, June 9.

Video of the exercises will be shown on the Big Board and infield video screens at Churchill Downs. Those unable to attend can watch an online live stream of the daily exercises with commentary on the Kentucky Derby Facebook (www.facebook.com/KentuckyDerby), Twitter (www.twitter.com/kentuckyderby) and at www.KentuckyDerby.com/Works from 7:20-7:45 a.m., thanks to TwinSpires.com, the country’s leading online and mobile betting platform and official betting partner of Churchill Downs, the Kentucky Derby and Breeders’ Cup World Championships. Also, clips of the activity will be uploaded on the Kentucky Derby YouTube channel.

“(Wilbo) ran well enough last year to almost win the race,” Hartman said. “He’s coming into the race really well and hopefully we can get it done this year. He’s a fast horse and doesn’t have to face Limousine Liberal this year.”

Wilbo, a 6-year-old gelding by Candy Ride (ARG), finished just 2 ½ lengths behind top sprinter Limousine Liberal in the 2017 Aristides. The nine-time winner most recently was the runner-up behind Whitmore in the $400,000 Count Fleet Sprint Handicap (GIII) at Oaklawn Park on April 14. Hartman won the Aristides in 2015-16 with millionaire Alsvid.

“Alsvid was such a cool horse to be around,” Hartman said. “He’s retired at his owner’s (James Rogers) farm in Oklahoma. I get periodic updates on how he’s doing and he looks great. They just put a 2-year-old in the paddock to give him a friend to play with.”

Iowa-based jockey David Cabrera has the mount on Wilbo and will break from Post 3.

The six-furlong Aristides, named after the first Kentucky Derby winner in 1875, is the first of two stakes events on Saturday’s 11-race Downs After Dark Presented by Budweiser program. The first race is 6 p.m. (all times Eastern). The Aristides goes as Race 10 at approximately 10:42 p.m. and the third running of the $75,000-added Mighty Beau Overnight Stakes, a five-furlong turf sprint, is Race 11 at approximately 11:10 p.m.

MULTIPLE GRADED STAKES WINNER HOGY MADE SLIGHT 9-5 MORNING-LINE FAVE IN MIGHTY BEAU – Michael Hui’s multiple stakes-winning gelding Hogy is the 9-5 morning-line favorite in the field of 10 that were entered in Saturday night’s third running of the $75,000-added Mighty Beau Overnight Stakes for 3-year-olds and up at five furlongs on Churchill Downs’ Matt Winn Turf Course.

MEET LEADERS – Through the halfway point of the 38-day Spring Meet, jockey Brian Hernandez Jr. had a 28-22 win lead over 15-time leading rider Corey Lanerie in the jockey standings. Florent Geroux was third with 17 wins followed by Shaun Bridgmohan and Ricardo Santana Jr., who were tied for fourth with 11 victories each. … Trainers Steve Asmussen and Kenny McPeek were tied atop the trainer standings with 11 wins while Mike Tomlinson was third with 10 wins. Rusty Arnold II, Eddie Kenneally, Mike Maker and Ian Wilkes were tied for fourth with eight wins each. … Ken and Sarah Ramsey maintained a 5-4 win lead in the owner standings over Gary and Mary West. Janis Whitham’s Whitham Thoroughbreds was third with three wins.

DOWN THE STRETCH – Racing at Churchill Downs continues on Twilight Thursday with an eight-race program at 5 p.m., highlighted by $1 beer, local food trucks and blues music by Laurie Jane and the 45s. … Thursday will showcase a massive $672,486 carryover in the 20-cent Single 6 Jackpot that gets underway in Race 3 at 5:58 p.m. … Downs After Dark Presented by Budweiser returns Saturday. Guests are encouraged to dress in bright, neon colors for the theme “Neon Nights.” Gates open at 5 p.m. with the first of 11 races scheduled at 6 p.m. To purchase tickets visit www.churchilldowns.com/tickets. ... Congratulations to trainer Eddie Kenneally for winning Churchill Downs’ Barn of the Week. Kenneally and his barn will receive a pizza party and winner’s circle recognition during Friday’s card. … At the halfway mark of the Spring Meet there were 96 horses claimed for a total of $2,123,500 compared to 90 for a total of $1,537,500 through the first 19 days of the 38-day Spring Meet a year ago. … Ed DeRosa of TwinSpires.com and Brisnet.com tweeted the following statistic on Thursday: “Of the 17 U.S. & Canadian racetracks with at least 100 races since April 30, @ChurchillDowns has the lowest favorite win percentage with 29.6%, and it also leads in average field size (8.5).” … “Inside Churchill Downs” will air Friday at 6 p.m. on ESPN 680/105.7. Those outside the Louisville radio market can listen live online at http://www.espnlouisville.com/ or via podcast on the station’s website or https://soundcloud.com/.