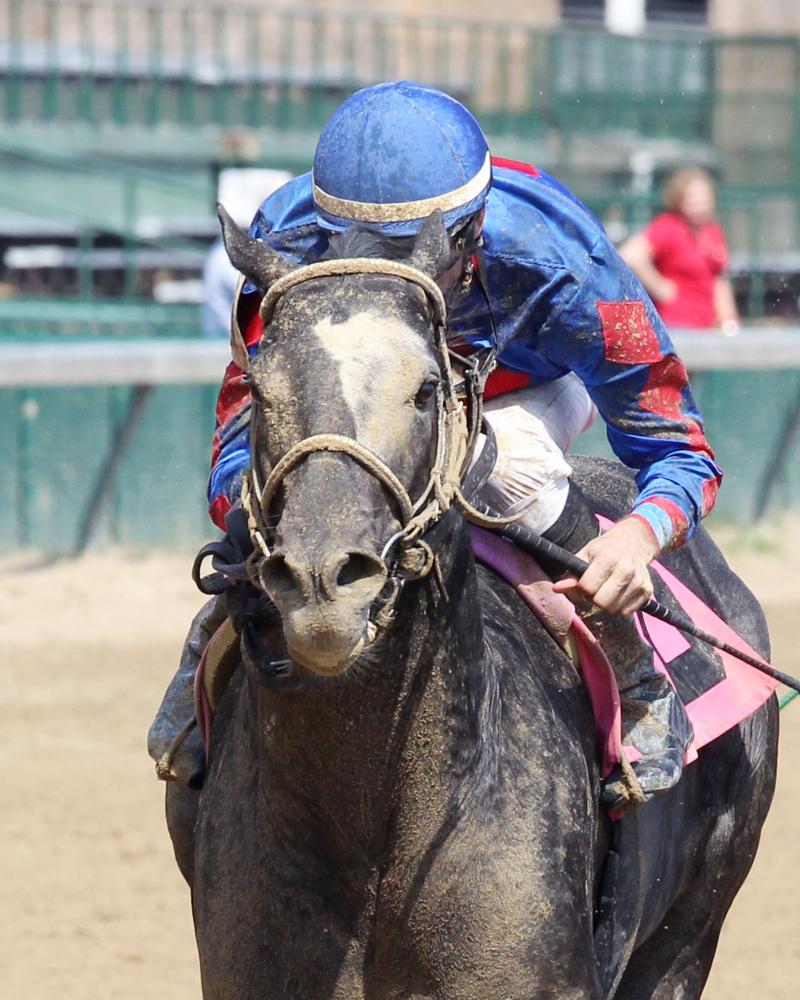 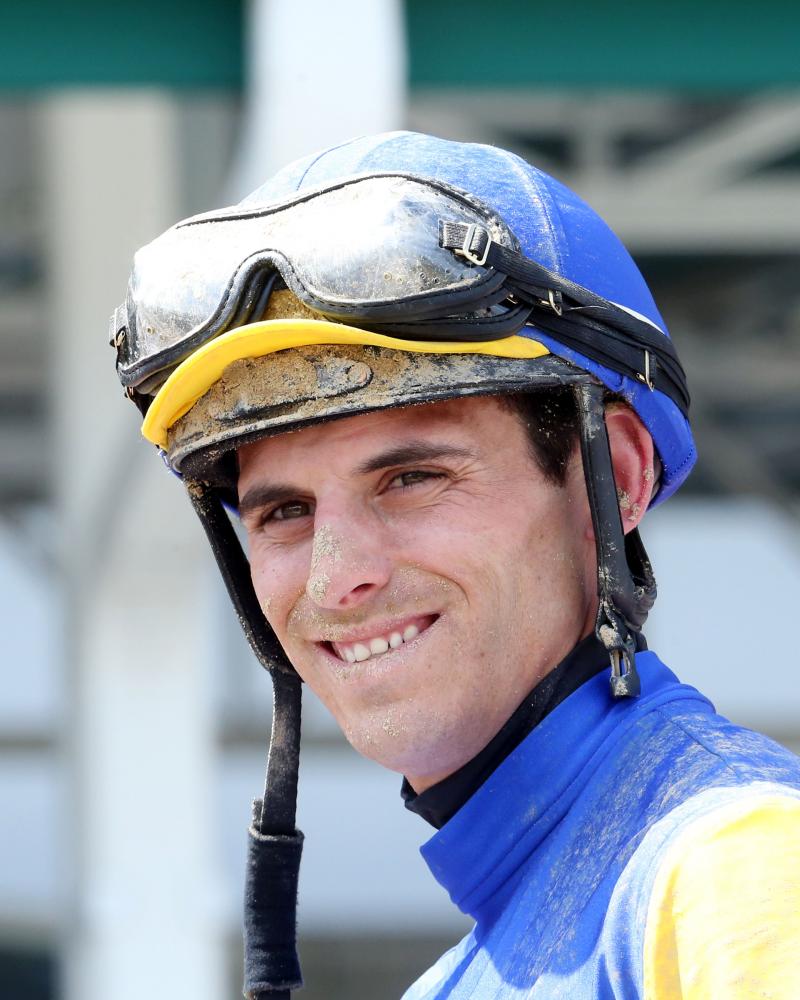 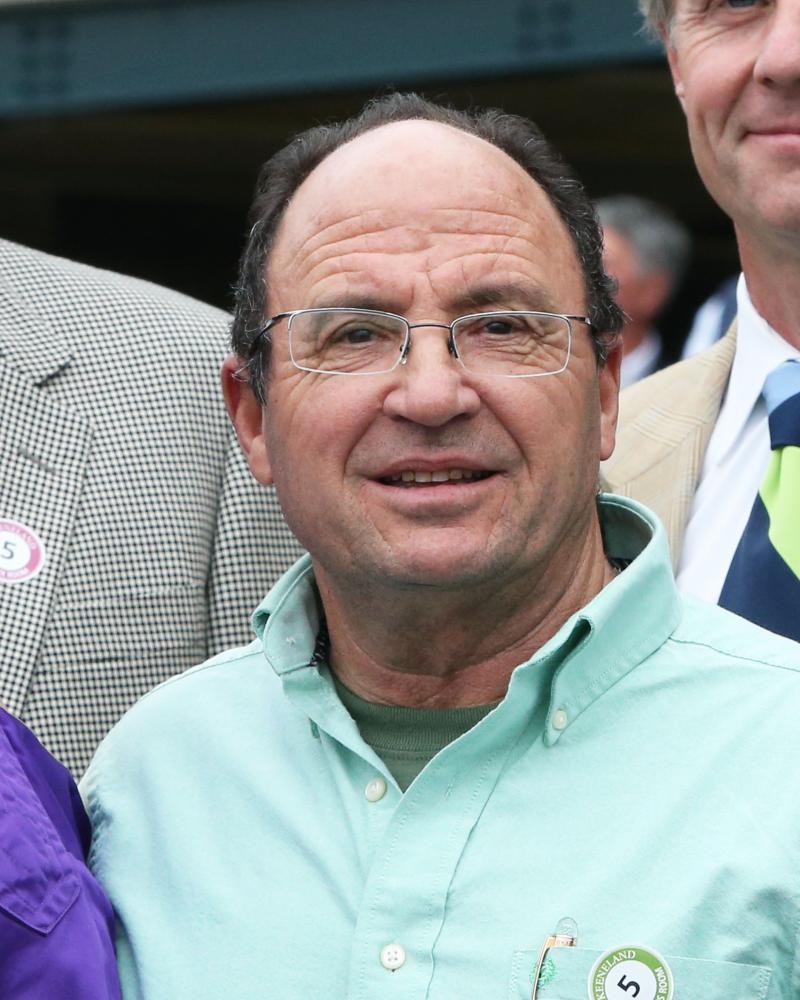 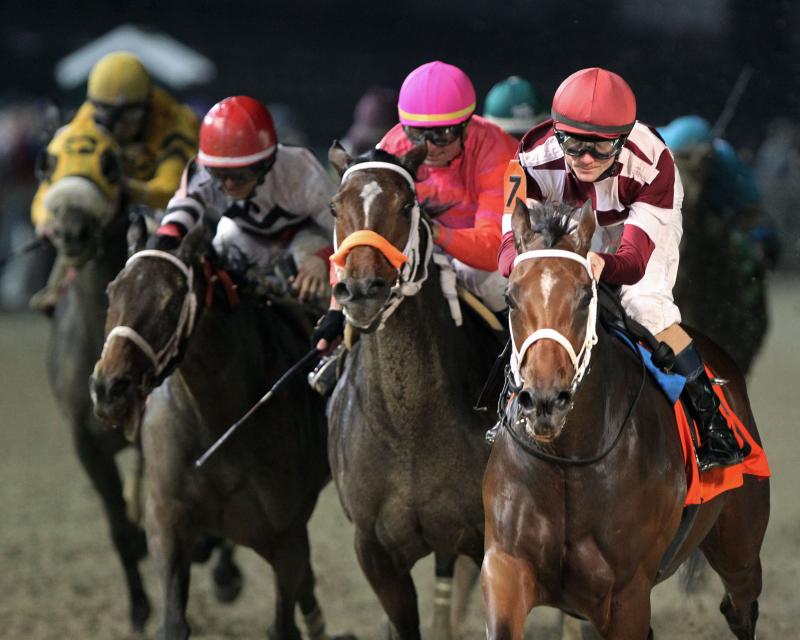 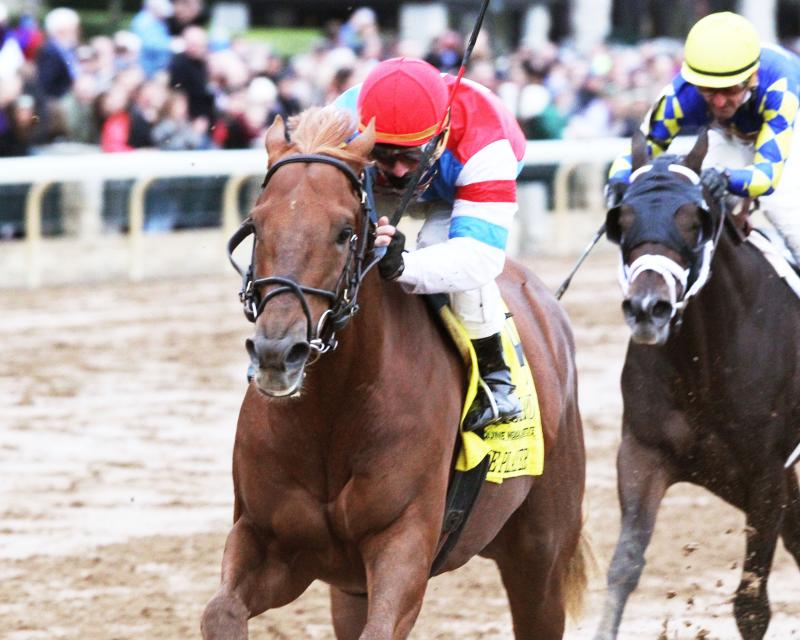 Carl Hurst and William “Buff” Bradley’s The Player , shown in his recent victory in Keeneland's Fayette (GII), breezed five furlongs in a bullet 1:00 Friday at Churchill Downs in preparation for a start in next Friday’s $500,000 Clark Handicap Presented by Norton Healthcare (GI). (Coady Photography, Keeneland)

Jockey Chris Landeros, who has ridden more than 450 races for his father-in-law, trainer Ian Wilkes, hopes Lothenbach Stables’ Gotta Go catapults him onto the “Road to the Kentucky Derby” trail in next Saturday’s $200,000 Kentucky Jockey Club (Grade II) at Churchill Downs.

“This is the time in my career where I need to take some chances,” said Landeros, who began riding full-time on the Kentucky circuit in 2014. “These are the type of mounts I strive to get. This is a horse who keeps improving every time I’ve been on him.

“I’ve been lucky to ride a lot of nice horses for Ian and he has a really nice string of 2-year-olds. One of my goals was to be able to go to Florida in the winter. I’m taking a shot this year for the first time and riding at Gulfstream Park. It was a really tough decision because we’ve been so consistent at Oaklawn the last few winters but with horses like Gotta Go it makes the decision a little easier. I want to make this my yearly routine to ride in Kentucky in the spring and fall, then go to Florida in the winter. There are a lot of other barns I’m starting to ride for that go to Florida so hopefully this helps keep my year-round business stay strong.”

Landeros, who is married to Wilkes’ daughter Shelby, has ridden Gotta Go in his last two starts with a most-recent victory in the one-mile, $80,000-added Street Sense Overnight Stakes.

“He really dug in and showed me how badly he wanted to win,” Landeros said. “There were a lot of experienced horses in that race and he was only making his third start after breaking his maiden. He has some maturing to do still but to be able to run like that on talent alone without completely being mentally ready, that is what impressed me. The Kentucky Derby is a long way away but hopefully this horse leads me there.”

The 2-year-old gray son of Shanghai Bobby hopes to give Wilkes a second-consecutive victory in the Kentucky Jockey Club after he won the 2016 edition with eventual Kentucky Derby contender McCraken.

“He’s still coming along with his training,” Wilkes said. “He’s got some learning to do still but he ran well against a solid field of horses (in the Street Sense).”

“I’m still deciding where to run her,” Catalano said. “I nominated her for both the Falls City and Mrs. Revere to give us some options. I’d like to work her on the grass before deciding to run in the Mrs. Revere but with the impending weather Saturday, I don’t know if we’ll get a chance to breeze her on the turf. She’s already beaten older horses so it wouldn’t be a problem if she ran in the Falls City instead.”

The National Weather Service forecast for Saturday includes a 100% chance of precipitation throughout the day.

“She really bounced back in the Chilukki and proved the type of horse we always thought she was,” Catalano said. “We’re obviously keeping our options open for different spots for her but she’s doing really great.”

THE PLAYER TOPS FRIDAY WORK TAB IN PREPARATION FOR CLARK HANDICAP – Carl Hurst and William “Buff” Bradley’s The Player recorded a bullet five-furlong breeze in 1:00 Friday morning at Churchill Downs in preparation for a start in next Friday’s $500,000 Clark Handicap Presented by Norton Healthcare (Grade I).

The Player, with jockey Calvin Borel aboard, started two lengths behind a set of horses that breezed for trainer Jimmy DiVito and finished three lengths in front at the wire through splits of :24.20 and :36.20, before galloping out six furlongs in 1:13.40, according to Churchill Downs’ clocker John Nichols.

Fellow Clark hopeful Honorable Duty recorded a maintenance five-furlong move in 1:02 for trainer Brendan Walsh. The 143rd running of the 1 1/8-mile test for 3-year-olds and up, run on “Black Friday,” Nov. 24, is one of seven stakes events to be contested over Thanksgiving weekend.

DUE TO HIS CHARM BECOMES HIGHEST PRICED WINNER AT CHURCHILL DOWNS SINCE 2009 – Felix Martinez’ Due to His Charm recorded a 4 ¾-length victory in the finale on Churchill Downs’ Thursday program at odds of 82-1 and became the longest-priced winner beneath the historic Twin Spires since Jerry Barry Jack won at odds of 98-1 on Nov. 5, 2009.

Due to His Charm paid $166 for a $2 win payout after he rallied from just off the pace in the $8,000 claiming event for 3-year-olds and up. The 4-year-old son of Devil His Due is trained by Bob Pincins and was ridden by Corey Orm.

DONA BRUJA MADE 8-5 MORNLING LINE FAVE IN SATURDAY’S CARDINAL ‘CAP – Dom Felipe LLC’s Dona Bruja (Arg), winner of the Old Forester Mint Julep Handicap (Grade III) on Churchill Downs’ Matt Winn Turf Course in June, will seek her second stakes triumph over that surface when she breaks from an outside post against 11 rivals as the 8-5 morning line favorite in Saturday’s 44th running of the $100,000 Cardinal Handicap (GIII).

“She was a champion in Argentina prior to coming to the America,” trainer Ignacio Correas IV said. “Ever since I watched her races I was so excited to bring her to America. The turf courses are different here than Argentina.”

Dona Bruja (14-10-3-0—$446,568) made her United States debut in the $100,000 Old Forester Mint Julep Handicap in June and defeated a contentious field by 1 ½ lengths. Following her Mint Julep victory, the 5-year-old mare recorded a one-length score in the $100,000 Modesty Handicap (GIII) at Arlington Park in July, and was a dead-heat runner-up to Dacita (Chi) in August’s Grade I Beverly D.

Jockey Ricardo Santana Jr. has the riding assignment for Dona Bruja and will break from post 12 under the high weight of 122 pounds.

The 1 1/8-mile turf test for fillies and mares is scheduled as the 10th event on an 11-race program that begins at 1 p.m. (all times EST). The Cardinal, which has a post time of 5:24 p.m., shares the Saturday spotlight with the 10th running of the $80,000-added Bet On Sunshine Overnight Stakes for 3-year-olds and up at seven furlongs. The Bet on Sunshine will be run as Race 5 with a scheduled post time of 2:55 p.m.

LIMOUSINE LIBERAL HEAVY 4-5 MORNING LINE FAVE IN SATURDAY’S BET ON SUNSHINE – Katherine Ball’s homebred Limousine Liberal, one of the top sprinters in the country, tops a field of eight 3-year-olds and up as the 4-5 morning line favorite in Saturday’s $80,000-added Bet On Sunshine Overnight Stakes at Churchill Downs.

Limousine Liberal, trained by Ben Colebrook, won a trio of stakes races at Churchill Downs during the Spring Meet that began with a 13-1 upset in the $500,000 Churchill Downs (GII) on the Kentucky Derby undercard. The 5-year-old gelding by Successful Appeal was the heavy favorite in the June’s $100,000 Aristides Stakes (GIII) and scored a 2 ½-length victory over The Truth Or Else. Limousine Liberal closed out the meet with a win in the $70,893 Kelly’s Landing Overnight Stakes on July 1.

The seven-furlong contest for 3-year-olds and up is carded as Race 5 with a scheduled post time of 2:55 p.m. (all times Eastern).

$500,000 Clark Handicap Presented by Norton Healthcare (GI) (1 1/8 miles, to be run Nov. 24 for 3-year-olds and up): Diversify, Good Samaritan, Honorable Duty, Hoppertunity, Mo Tom, Seeking The Soul, and The Player.

“INSIDE CHURCHILL DOWNS” – The final episode of the 2017 season of “Inside Churchill Downs” will air Friday at 6 p.m. on ESPN 680/105.7 featuring special guest, Hall of Fame trainer Bob Baffert. The one-hour horse racing radio show is co-hosted by Churchill Downs Racetrack’s John Asher, Darren Rogers and Kevin Kerstein. Those outside the Louisville radio market can listen live online at http://www.espnlouisville.com/ or via podcast on the station’s website or https://soundcloud.com/.

DOWN THE STRETCH – Churchill Downs’ popular “Who’s the Champ?” Handicapping Contest will return Sunday. Interested participants can enter for $35 ($30 for TSC Elite members) for a chance to win the $1,000 cash voucher first prize by placing mythical $2 win and place bets on Races 3-8. Second place receives a $500 voucher and third place is worth a $200 voucher. Registration will take place Sunday between 11:30 a.m. and 1:30 p.m. on the Clubhouse second floor at the top of the Gate 17 escalators. … The 50/50 charitable gaming raffle is back for the Fall Meet. Proceeds from the raffle will go towards charitable organizations that benefit from the Churchill Downs Incorporated Foundation, a 501(c)(3) nonprofit corporation that helps support the critical work of nonprofits in our industry, make a difference in important public health programs and provide meaningful opportunities in art and education. Visit www.derbygives.com to purchase tickets and for more information. 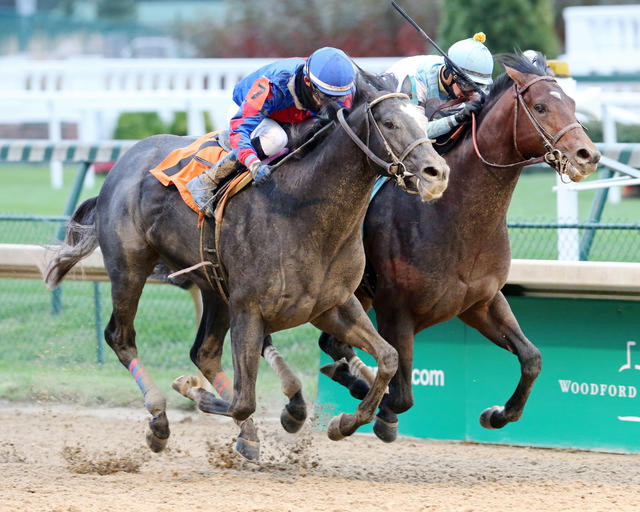