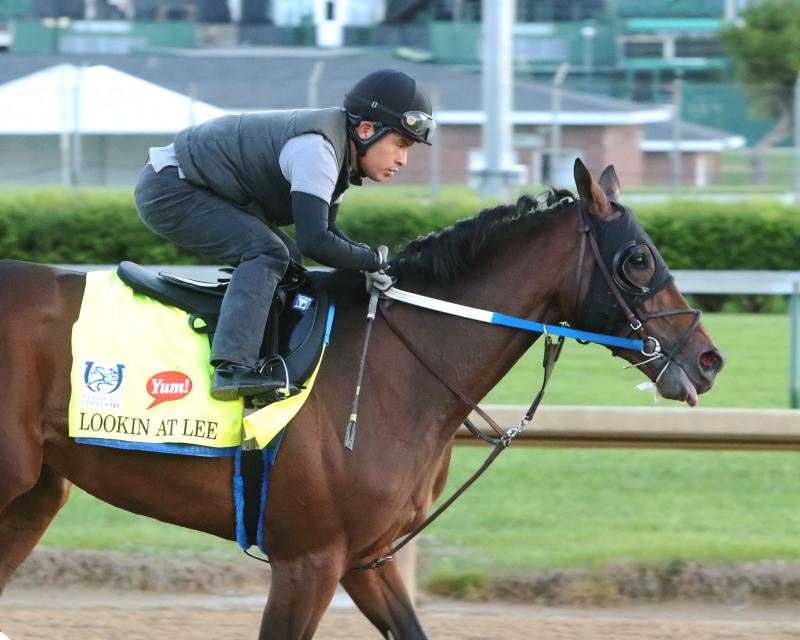 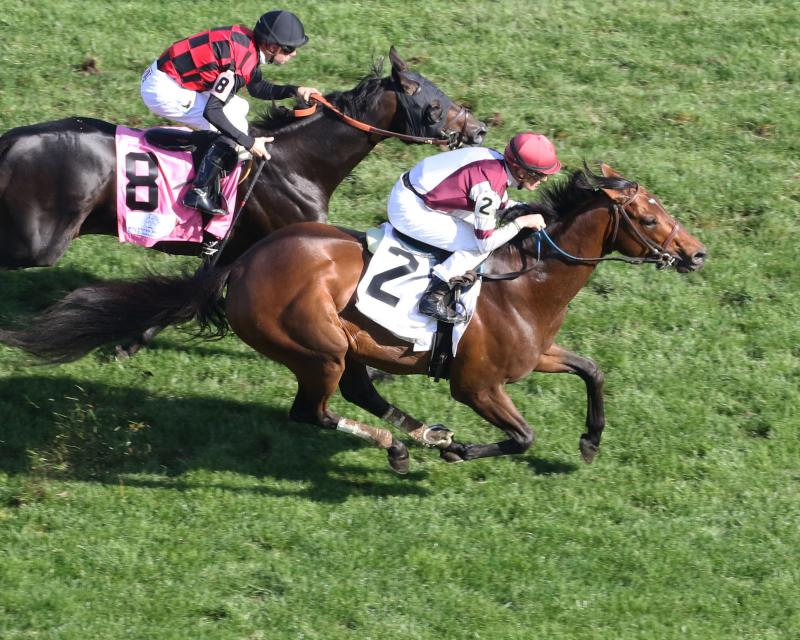 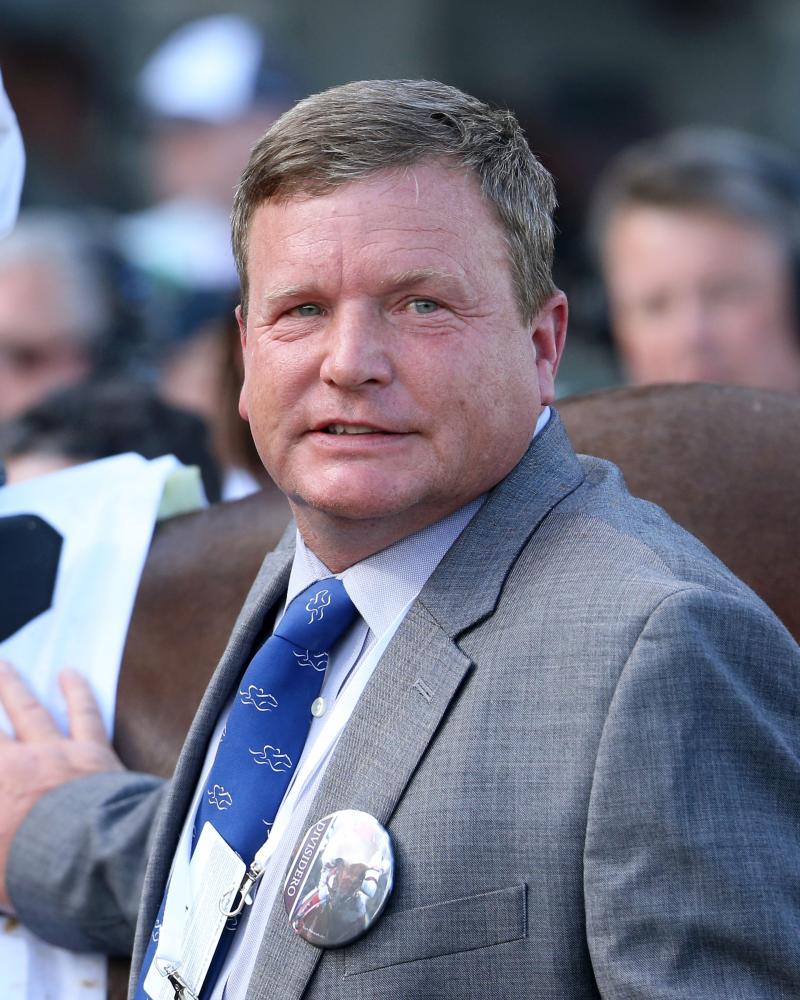 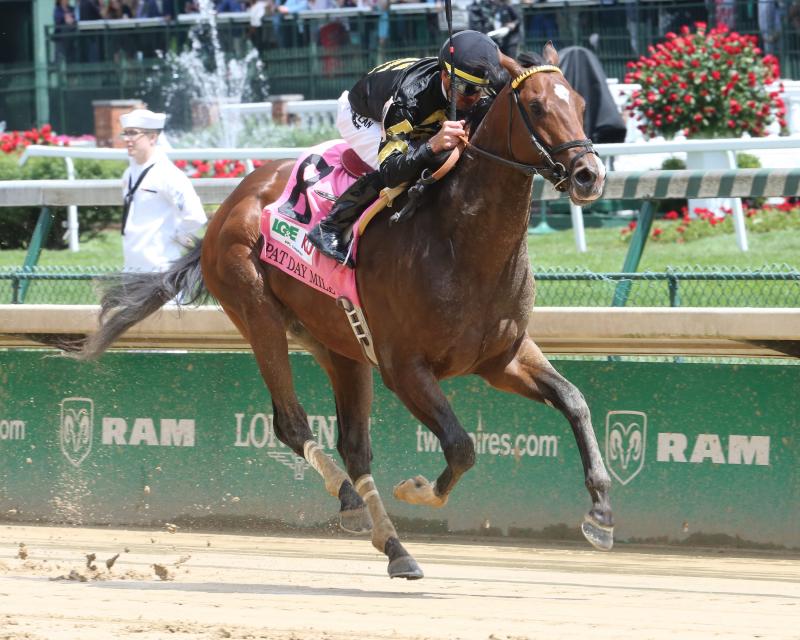 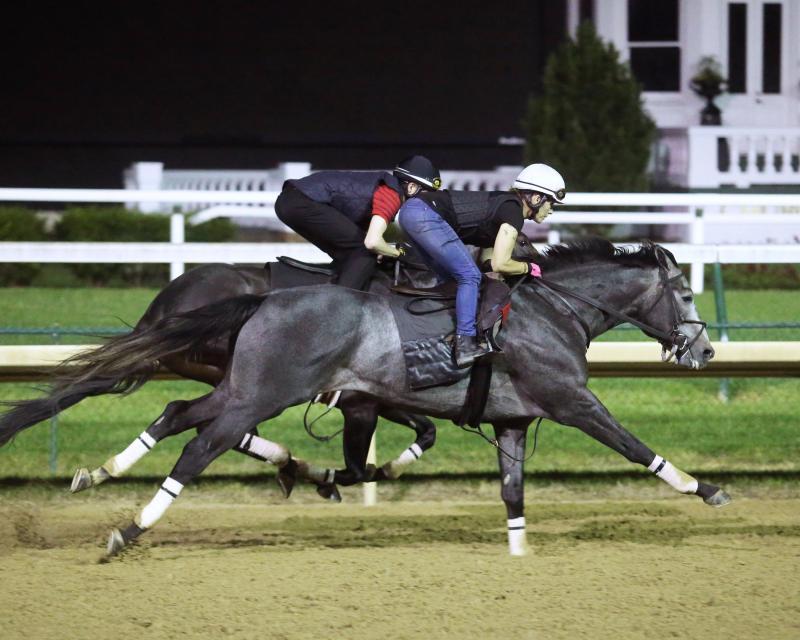 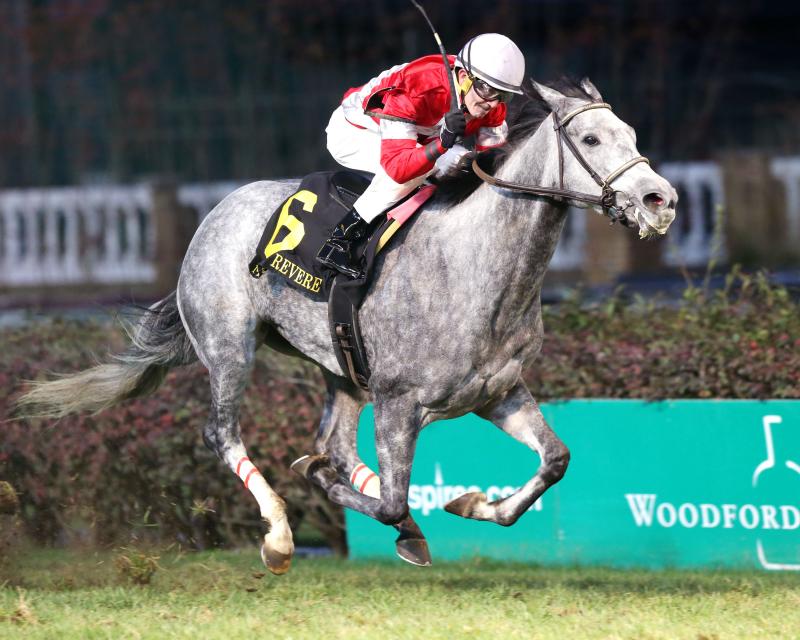 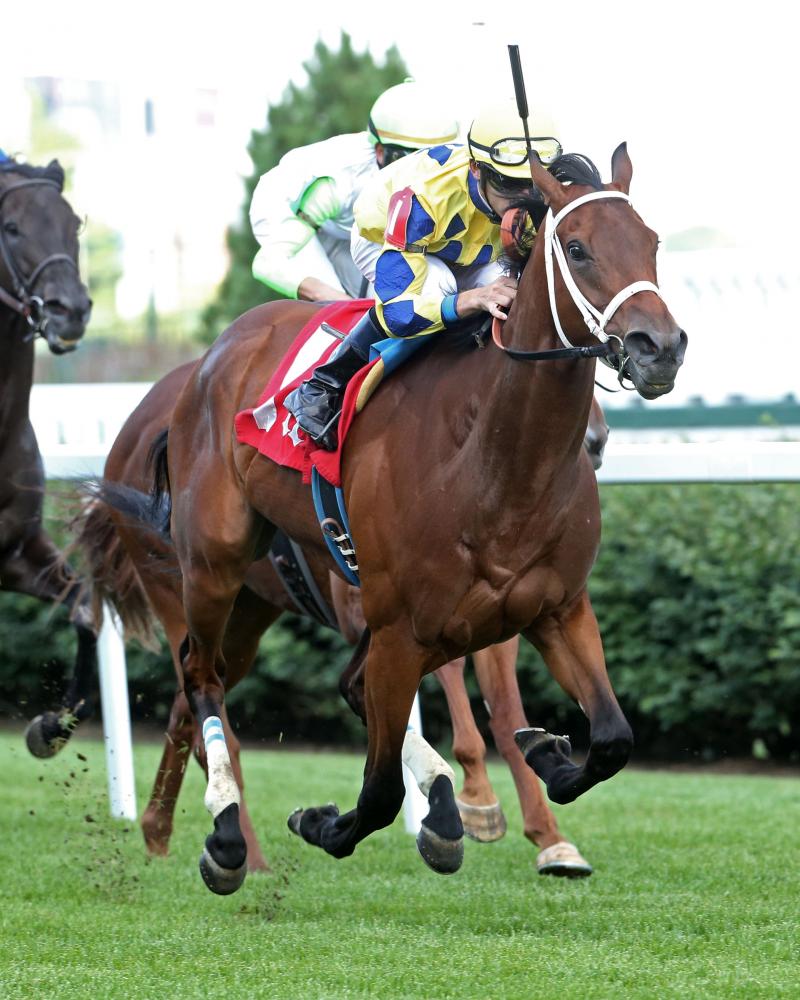 Several Churchill Downs-based connections are in Elmont, NY this weekend for Belmont Park’s “Racing Festival” centered around the third jewel of the Triple Crown, the $1.5 million Belmont Stakes (Grade I).

Locally, Churchill Downs’ nine-race program Friday and 11-race program Saturday will have a first post of 12:45 p.m. (all times Eastern). Advance wagering on Saturday’s 149th Belmont Stakes from Belmont Park will be offered all day Friday.

Five stakes races are carded Friday at Belmont’s 11-race program, including the $500,000 New York (GII) for fillies and mares at 1 ¼ miles on the inner turf and $400,000 Belmont Gold Cup Invitational (GIII) for 4-year-olds and up at two miles on the Widener Turf Course. The two races go as Races 9 and 10 at 5:14 p.m. and 5:46 p.m., respectively, and will be televised on NBCSN’s “Belmont Access” from 5-6 p.m. Similar to Churchill Downs’ popular Oaks/Derby Double, the New York Racing Association (NYRA) will offer a pair of two-day doubles: the New York/Met Mile Double, which has a $100,000 guarantee, and the $300,000 guaranteed Belmont Gold Cup/Belmont Stakes Double.

Churchill Downs-based trainer Tim Glyshaw will test Bullards Alley, recent third-place finisher in the Louisville Handicap (GIII), in the two-mile Belmont Gold Cup. Leparoux is named to ride French-invador Now We Can and Geroux has the call on Wall of Fire. Maker is scheduled to send Taghleeb to post at 6-1 on the morning line.

Other Churchill Downs connections in stakes races on Saturday’s Belmont Park program include Pat Day Mile (GIII) victor Wild Shot, who is 4-1 on the morning line in the $500,000 Woody Stephens (GII) for trainer Rusty Arnold II and Churchill Downs’ leading rider Corey Lanerie has the call.

Churchill Downs-based Petrov, 8-1 on the morning line, is also set to test his hand in the Woody Stephens for Ron Moquett.

Trainer Joe Sharp, based at Trackside Louisville, has longshot Factory of Faith in the Ogden Phipps.

Along with Hollywood Handsome in the Belmont Stakes, Stewart is scheduled to run G M B Racing’s Tom’s Ready in the Met Mile.

“In a perfect scenario we’d be coming from just off the pace,” Hernandez Jr. said. “With the rail being out (22 feet in Lane 3) we may have to be a bit more forward with her to get position. There’s no real speed in the race but you’d have to imagine Believe in Bertie and Sky My Sky will show some pace. Linda has been training well so I’m excited to rematch with Believe in Bertie after running third to her last out.”

Hernandez Jr. has been aboard Linda for her three career victories that include a stakes triumph in the Mrs. Revere (GII) last fall at Churchill Downs. Linda’s overall record is 10-3-3-3 with $336,110 in earnings.

“I’m so proud of her,” trainer Jimmy DiVito said. “She sat a great trip with Chris (Landeros). Her dam is by Bernstein and we know how much they like the grass.”

Lovely Bernadette had her eye on the Kentucky Oaks after winning last fall’s Rags to Riches Stakes at Churchill Downs but did not have enough points to qualify for the race. After her 13th-place finish in the Eight Belles (GII) DiVito wanted to try something new with Lovely Bernadette.

“Before we did anything drastic I thought we should give turf a try,” DiVito said. “She showed she was a different horse (Thursday). We definitely have our options open now and will look for a 3-year-old filly stake on the turf for her next start.”

STAKES PROBABLES – Next Saturday’s “Downs After Dark” 11-race program is highlighted by the $500,000 Stephen Foster Handicap Presented by GE Appliances (GI) and $200,000 Fleur de Lis Handicap Presented by el Jimador (GII). Both races are part of the Breeders’ Cup “Win and You’re In” Challenge Series. The winner of the Stephen Foster receives an automatic berth to the Nov. 4 Breeders’ Cup Classic while the Fleur de Lis victor receives a starting gate spot in the Breeders’ Cup Distaff on Nov. 3. This year’s Breeders’ Cup will take place at Del Mar in Southern California.

Along with the Stephen Foster and Fleur de Lis, the 11-race card offers three other graded stakes events. Below are the known probable entrants for all five races, according to Churchill Downs stakes coordinator Dan Bork:

Weights for the handicaps will be released Saturday and entries for the races will be taken Wednesday.

DOWN THE STRETCH – There is a $58,516 carryover in the 20-cent Single 6 Jackpot Friday in races 4-9 at Churchill Downs. … Churchill Downs plans to show on its Big Board and select television monitors throughout the facility choice action from the NCAA Division 1 Baseball Super Regional between instate rivals University of Louisville Cardinals and University of Kentucky Wildcats. The best-of-three series to clinch a trip to the College World Series in Omaha, Neb. will be held Friday-Sunday at noon at nearby Jim Patterson Stadium. All ticket-holders to those games will receive free general admission to Churchill Downs on those game days by showing their ticket stubs – perfect for any post-game celebration. … “Inside Churchill Downs” hosted by Churchill Downs’ Communications Team – John Asher, Darren Rogers and Kevin Kerstein – airs Saturday at 10 a.m. on ESPN 680/105.7. The show will cover all the stakes action at Belmont Park and Churchill Downs with Hall of Fame jockey Jerry Bailey, trainer Brad Cox and handicapper and former U of L basketball player David Levitch. Those outside the Louisville area can stream live on www.espnlousville.com. … The “Who’s the Champ? Handicapping Contest” returns Sunday. Interested participants can enter for $35 ($30 for TSC Elite members) for a chance to win a $1,000 cash voucher first prize by placing mythical $2 win and place bets on Races 3-8. Second place receives a $500 voucher and third place is worth a $200 voucher. Registration takes place between 11:30 a.m. and 1:30 p.m. at the top of the Gate 17 escalators. …There will be no Barn Notes published on Saturday. Barn Notes will return Sunday. 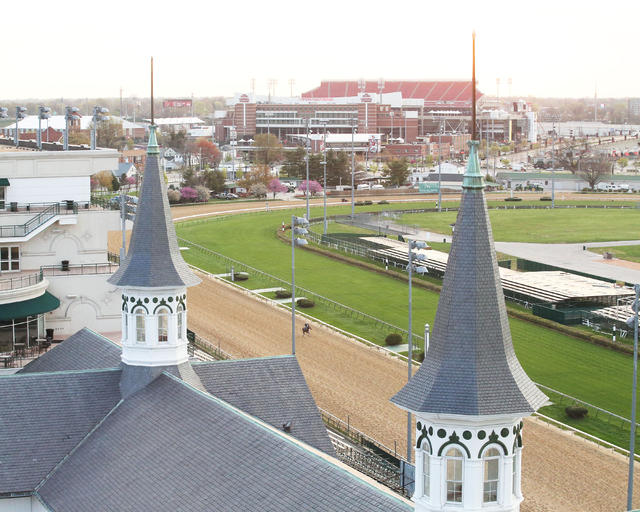