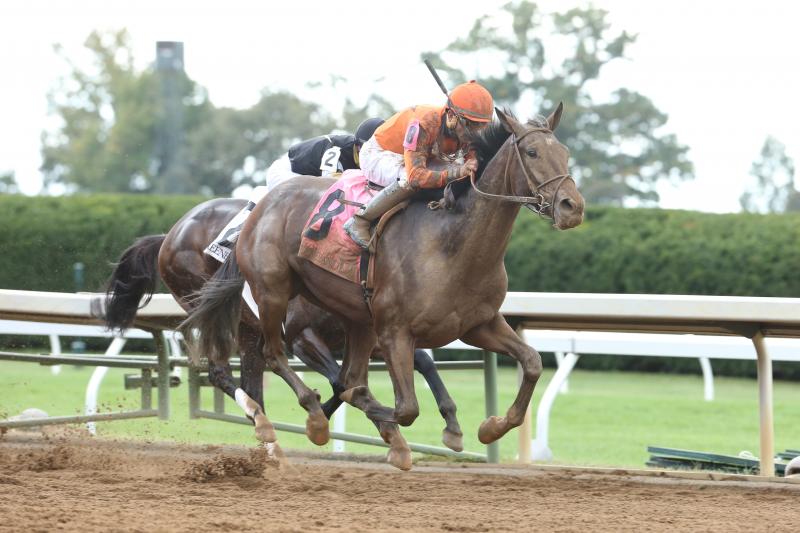 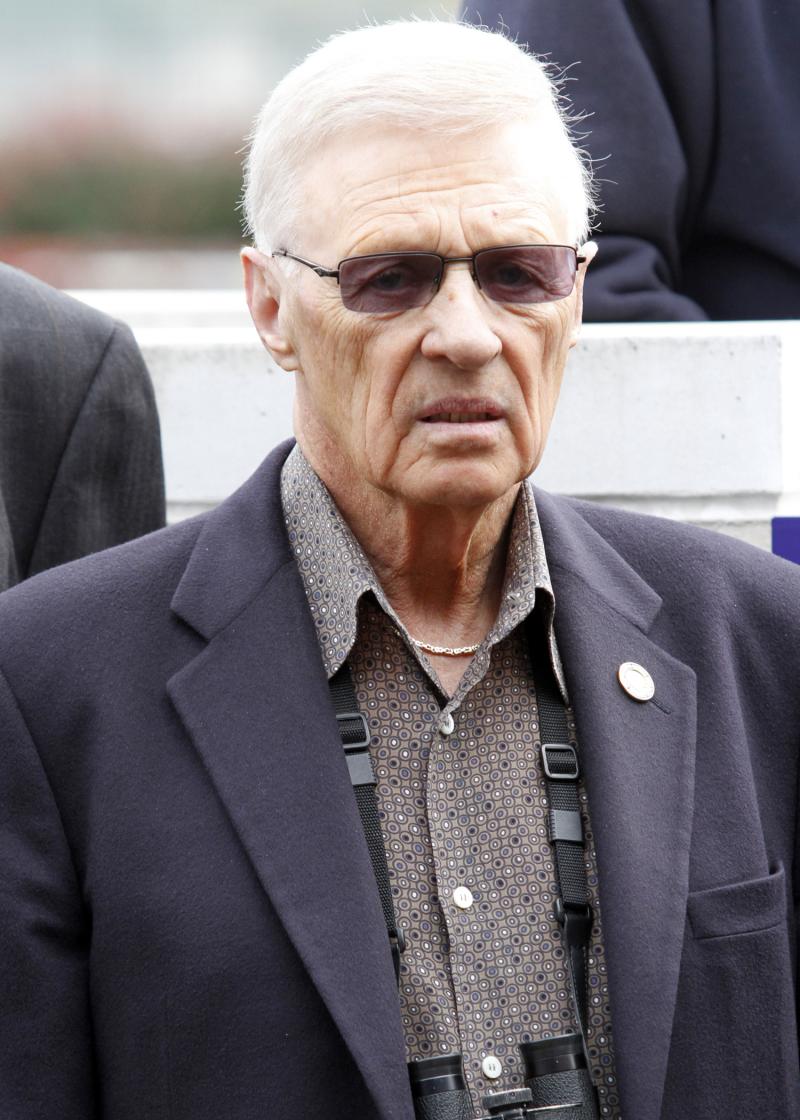 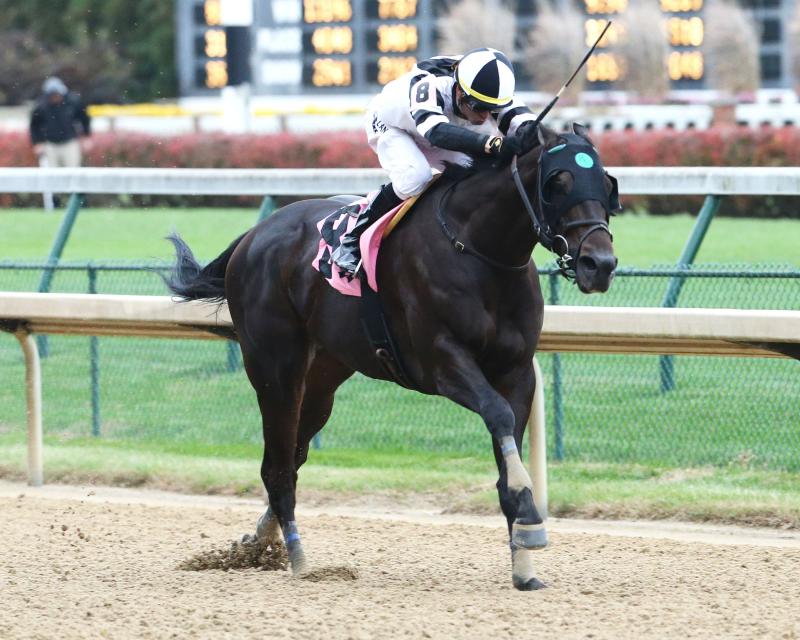 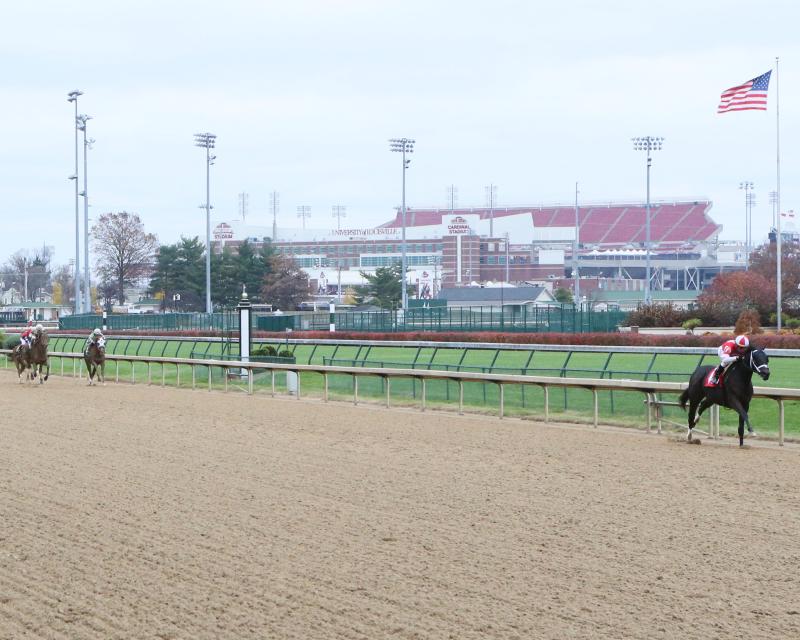 Steve Landers Racing’s Big Exchange rolled to a 24 3/4-length winner in Saturday's second race to become only the fourth horse since 1976 to win a Churchill Downs race by more than 20 lengths. (Coady Photography, Churchill Downs) Big Exchange’s win margin of 24 ¾ lengths ties Outer Banks (May 7, 1998) with the largest winning distance of any horse at Churchill Downs since 1976.

“Frank has always supported me throughout my life,” Romans said. “This horse has a very bright future ahead of him. He’s still learning but is starting to really come together.”

Tiz Mischief, a 2-year-old colt by Into Mischief, rallied from last to break his maiden by one length on Oct. 7 at Keeneland.

“I definitely think he’s one of my better 2-year-olds for the future,” Romans said after Tiz Mischief breezed five furlongs in 1:01 Saturday at Churchill Downs. “He’s really impressed me so far in his career and I think we’ll take a shot with him in the Jockey Club.”

Jones, a former top client of Romans’ father Jerry, is the Vice President of the Kentucky HBPA and serves on the Board of Directors for the Kentucky Racing Health and Welfare Fund as well as the Kentucky Thoroughbred Owners.

“Frank Jones is the single most important person in my life to this day outside of my father, who died at (age) 57,” Romans said. “I was young when I took over the barn and Frank was there. Frank was there the day I was born. Dad and Frank were friends before of the two of them had two nickels to rub together. He’s had two trainers in all of the years he’s had racehorses and that was my father and me. Without him, I don’t know where I would be in life let alone horseracing.”

“He’s also one of the most important people to Kentucky racing that nobody really knows or talks about,” Romans said. “Between 30 years on the (Kentucky) HBPA board negotiating all the contracts and working with people like (former Churchill Downs Incorporated president and CEO) Tom Meeker or (Churchill Downs Incorporated Chief Executive Officer) Bill Carstanjen that see him as an equal to make racing better, to all of his years on the (Kentucky) Horse Racing Commission board, he’s always been up-to-date on things in the game and absolutely has been one of the biggest players to make Kentucky racing what it’s become.”

Tiz Mischief could be joined in the 1 1/16-mile Kentucky Jockey Club by stablemate Promises Fulfilled, according to Romans.

“I think this horse will excel even more in his 6-year-old campaign next year,” Colebrook said. “I think as sprinters enter their 6-year-old year they typically improve.”

Limousine Liberal, a 5-year-old gelded son of Successful Appeal, will receive time off at Ball’s farm for 30-45 days before returning to training in 2018.

“We all know how much he loves this track at Churchill and it’s really exciting that the Breeders’ Cup is here next year,” Colebrook said. “We’ll probably aim for the same campaign as we did this year with the ultimate goal the Breeders’ Cup Sprint.”

Earlier during the Spring Meet at Churchill Downs, Limousine Liberal scored a 13-1 upset in the $500,000 Churchill Downs (Grade II) on the Kentucky Derby undercard, won the $100,000 Aristides (GIII) in June and the $70,893 Kelly’s Landing Overnight Stakes in July.

BIG EXCHANGE CRUSHES $16,000 CLAIMER BY 24 ¾ LENGTHS – Steve Landers Racing’s Big Exchange became only the fourth horse since 1976 to win by more than 20 lengths at Churchill Downs when he beat a field of five rivals in Saturday’s second race.

Big Exchange’s win margin of 24 ¾ lengths ties Outer Banks (May 7, 1998) with the largest winning distance of any horse at Churchill Downs since 1976.

The 3-year-old gelded son of Exchange Rate led wire-to-wire in the conditioned $16,000 claiming event and returned $3.60 for the win with jockey Corey Lanerie aboard. Big Exchange was claimed in a five-way shake by owner Gene Burkholder for trainer Kim Puhl.

Other horses to win by more than 20 lengths at Churchill Downs during that span were Capt. Bullet Bob (21 ¼ lengths) in a 2011 starter allowance race and Rachel Alexandra (20 ¼ lengths) in the 2009 Longines Kentucky Oaks (Grade I).

Lanerie begins racing Sunday with a 27-13 lead over Ricardo Santana Jr. and Julien Leparoux in the jockey standings with six days of racing remaining in the Fall Meet.

DOWN THE STRETCH – Racing begins Sunday with a first post of 1 p.m. (all times Eastern). The 20-cent Single 6 Jackpot has a carryover of $16,506 and will begin in Race 5 at 2:55 p.m. … Churchill Downs’ popular “Who’s the Champ?” Handicapping Contest will return Sunday. Interested participants can enter for $35 ($30 for TSC Elite members) for a chance to win the $1,000 cash voucher first prize by placing mythical $2 win and place bets on Races 3-8. Second place receives a $500 voucher and third place is worth a $200 voucher. Registration will take place Sunday between 11:30 a.m. and 1:30 p.m. on the Clubhouse second floor at the top of the Gate 17 escalators. … Racing resumes Wednesday-Sunday for the final week of racing at Churchill Downs in the 2017 calendar year with a first post of 1 p.m. There is a special 11:30 a.m. post on Thanksgiving Day for the 12-race program which includes the $200,000 Falls City Handicap (GII) and the $200,000 River City Handicap (GIII). Friday’s program features the $500,000 Clark Handicap Presented by Norton Healthcare (GI) and $200,000 Mrs. Revere (GII). Two-year-olds headline Saturday’s “Stars of Tomorrow II” program with the $200,000 Kentucky Jockey Club (GII) and $200,000 Golden Rod (GII) both stops on the “Road to the Kentucky Derby” and “Road to the Kentucky Oaks”, respectively. Racing concludes for the Fall Meet on Sunday, Nov. 26 with mandatory payouts in the 20-cent Single 6 Jackpot and $1 Super Hi 5. ... The 50/50 charitable gaming raffle is back for the Fall Meet. Proceeds from the raffle will go towards charitable organizations that benefit from the Churchill Downs Incorporated Foundation, a 501(c)(3) nonprofit corporation that helps support the critical work of nonprofits in our industry, make a difference in important public health programs and provide meaningful opportunities in art and education. Visit www.derbygives.com to purchase tickets and for more information. 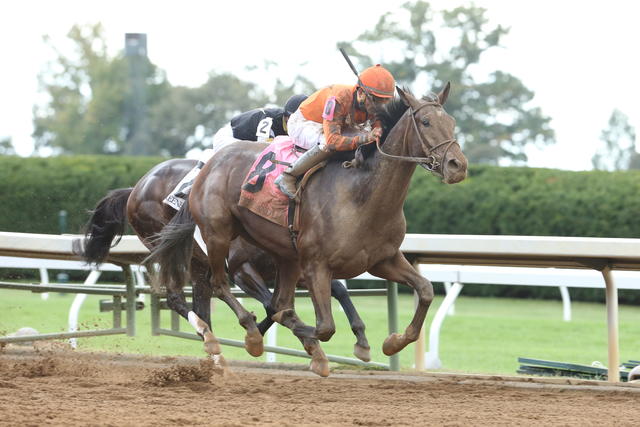