Sackatoga Stable’s Tiz the Law was made the 7-5 morning line favorite by veteran oddsmaker Mike Battaglia for Saturday’s $300,000 Kentucky Jockey Club (Grade II) – the co-featured event on Saturday’s penultimate day of racing at the 2019 Fall Meet.

Trained by 2003 Kentucky Derby-winning conditioner Barclay Tagg, the undefeated Grade I winner has gotten to know Churchill Downs well over the last two days by schooling in both the paddock and starting gate.

“He’s got a good way about him,” Tagg said. “He’s interested in many things in his life but he doesn’t act silly. He’s all business on the racetrack.”

The son of Constitution will attempt to become the first New York-bred horse to win the Kentucky Jockey Club since Eugene Klein’s Notebook won the 1 1/16-mile race in 1987.

“We rarely buy anything but New York breds,” Sackatoga Stable’s managing partner Jack Knowlton said. “This was a very different situation purchasing him than it was for Funny Cide – not to mention this horse is a colt and not a gelding. We’re still a very small operation but we have big dreams like everyone else.”

Billed as “Stars of Tomorrow II,” each of the 12 races on Saturday’s card are exclusively for 2-year-olds that may have aspirations of trail blazing their way to next spring’s Kentucky Derby Presented by Woodford Reserve (GI) and Longines Kentucky Oaks (GI).

All horses will tote 122 pounds.

Inaugurated in 2005, the Stars of Tomorrow programs at Churchill Downs have helped launch the careers of more than 50 future Grade I winners including: Kentucky Derby winner Super Saver; Horse of the Year and Breeders’ Cup Classic winner Gun Runner; 2011 Preakness and 2012 Met Mile and Clark winner Shackleford and Kentucky Oaks winners Rachel Alexandra, Believe You Can and Monomoy Girl.

RAGS TO RICHES WINNER FINITE MADE 7-5 CHOICE IN GOLDEN ROD – Winchell Thoroughbreds, Thomas Reiman, William Dickson and Deborah Easter’s impressive $123,859 Rags to Riches winner Finite will break from the rail as the 7-5 favorite in Saturday’s 76th running of the $300,000 Golden Rod (Grade II) at Churchill Downs.

Trained by Hall of Famer Steve Asmussen, Finite scored an impressive six-length win in the Rags to Riches under jockey Ricardo Santana Jr. The chestnut filly by Munnings broke her maiden two starts ago on the turf at Kentucky Downs. The Golden Rod will be Finite’s first test running at two turns.

The 1 1/16-mile race is the co-headliner on the second-to-last of the 26-day Fall Meet. Billed as “Stars of Tomorrow II,” each of the 12 races is exclusively for 2-year-olds.

All fillies will carry 119 pounds.

“He’s done everything right to be ready to run a big effort in the Clark,” trainer Brad Cox said. “I think it was a combination of things that didn’t go right last out (a 10th place finish in the $6 million Breeders’ Cup Classic) but with a clean trip he’s set to run a good race.

“He worked very impressively last time out (five furlongs in 1:00.80 in company with Blended Citizen) and really galloped out well around the turn.”

Owendale, a son of Into Mischief, has improved in the back half of his 3-year-old campaign with victories in the $500,000 Ohio Derby (GIII) and $400,000 Ohio Derby. Friday’s Clark will be Owendale’s second test facing older company.

New for 2019, the Clark is no longer a handicap race. All horses will tote 121 pounds with the exception of Grade I winner Seeking the Soul, who will carry 123 pounds, and 3-year-old Owendale at 118 pounds.

CASSE HOPES HARD LEGACY CAPS OFF HER 3-YEAR-OLD CAMPAIGN WITH MRS. REVERE WIN – Philanthropist and longtime horse owner Marylou Whitney passed away in July and while she may not be with us, her horses remain in training. One of those horses, $150,000 Regret (Grade III) winner Hard Legacy, will hope to cap her 3-year-old season with a victory in Saturdays’ $300,000 Mrs. Revere (GII).

“To have the opportunity to train for someone like Marylou has been unbelievable to my career,” trainer Norm Casse said. “She may not be here any long her but her horses are. This horse has run some strong races this year including her win in the Regret. I think she fits right with this field.

“Churchill Downs is my home and it’s very special to have a horse running in this race.”

Julien Leparoux, who holds the record for the most victories in the Mrs. Revere (four), will ride Hard Legacy, a three-time winner by Hard Spun.

Both Independence Hall and Storm the Court were made 12-1 individual co-favorites on veteran odds maker Mike Battaglia’s morning line. The pari-mutuel field of “All Other 3-Year-Old Colts and Geldings” is expected to be the overall first-pool favorite for the 22nd consecutive year and Battaglia projects it to close as the 6-5 choice.

In addition to Independence Hall and Storm the Court, other promising juveniles expected to attract attention at the betting windows include Dennis’ Moment (15-1), the Breeders’ Cup Juvenile favorite who finished sixth after going to his knees at the start; impressive Breeders’ Futurity (GI) winner Maxfield (15-1); runaway Champagne (GI) winner Tiz the Law (20-1), who’ll headline Saturday’s $300,000 Kentucky Jockey Club (GII) at Churchill Downs; and Honor A.P. (20-1), a swift maiden winner who is expected to make his next start in the $200,000 Los Alamitos Futurity (GII) on Dec. 7.

FREE BRISNET PAST PERFORMANCES FOR WEEKEND STAKES – Brisnet.com will help the holiday handicapping with free past performances for each of Churchill Downs’ graded stakes on the closing Thanksgiving weekend.

The opening leg from Fair Grounds is a first-level allowance for 3-year-olds and up at 1 1/16 miles on turf (an oversubscribed field of 14), while the third leg is the $75,000 Richard R. Scherer Memorial for fillies and mares at 5 ½ furlongs on the grass (an oversubscribed field of 12). The second and fourth legs from Churchill Downs are likely to be the Golden Rod and Kentucky Jockey Club (entries will be drawn Wednesday).

CHEF DANIELSON AND TEAM READY FOR THANKSGIVING TRADITION AT CHURCHILL DOWNS – With more than 3,000 pounds of turkey ready to be carved, alongside all of the fixings, Thanksgiving Day at Churchill Downs has been a Louisville, Ky. tradition for 50 years.

The first year that Churchill Downs raced on Thanksgiving Day was 1969.

Around 8,000 turkey dinners will be served with all the trimmings, making it the largest number anywhere in the region.

DOWN THE STRETCH – The 20-cent Single 6 Jackpot was hit Wednesday to the tune of $255,793 by an online bettor. The ticket cost $129.60: 4,6,8/3,7,8/6,7/6,8,13/1,8,9,10/2,5,10. The wager will start over for racing Thursday and there will be a mandatory payout on Sunday’s closing day. First post Thursday is 11:30 a.m. … Friday’s $300,000 Mrs. Revere (Grade II) is a special race for trainer Tommy Drury. The 1 1/16-mile grass event is named after Dr. Hiram Polk and Dr. David Richardson’s four-time Churchill Downs stakes winner Mrs. Revere. Drury used to pick buckets of clover to give to Mrs. Revere while his dad galloped horses at the Skylight Training Center, located approximately 30 minutes from Churchill Downs. … It is a homecoming for Track Superintendent Jamie Richardson with trainer Barclay Tagg’s undefeated 2-year-old colt Tiz the Law in Saturday’s $300,000 Kentucky Jockey Club (GII). Richardson used to groom horses for Tagg in his home state of Maryland in the 1980s. … Happy Thanksgiving! 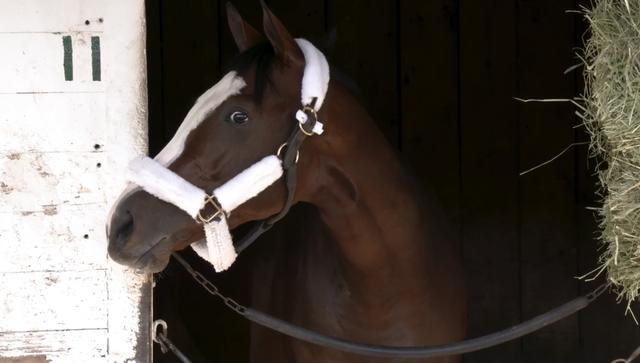