Trained by Al Stall Jr., the 6-year-old son of Smart Strike has been in top form since a nonplused ninth-place effort in the $9 million Pegasus World Cup (GI) in late January at Gulfstream Park. Tom’s d’Etat’s 2019 campaign included a victory in the $100,000 Alydar Stakes at Saratoga, a runner-up effort in the $400,000 Alysheba (GII) and a third-place finish in the $600,000 Stephen Foster (GII) at Churchill Downs.

Among the rivals to Tom’s d’Etat in the Clark is Calumet Farm’s homebred Bravazo, who will be making his first start in 10 months after he finished fourth in the Pegasus World Cup.

“I don’t think the time off has hurt him a bit,” Hall of Fame trainer D. Wayne Lukas said. “I think he’ll come back as a stronger horse.”

Bravazo, a 4-year-old colt by Awesome Again, danced in nearly every dance during his 3-year-old campaign, including a narrow runner-up effort behind eventual Triple Crown winner Justify in the $1.5 million Preakness (GI) and a neck defeat in last year’s Clark. Luis Saez has the mount in the Clark and will break from post 10.

New for 2019, the Clark is no longer a handicap race. All horses will tote 121 pounds with the exception of Grade I winner Seeking the Soul, who will carry 123 pounds, and 3-year-old Owendale at 118 pounds

Both Independence Hall and Storm the Court were made 12-1 individual co-favorites on veteran odds maker Mike Battaglia’s morning line. The pari-mutuel field of “All Other 3-Year-Old Colts and Geldings” is expected to be the overall first-pool favorite for the 22nd consecutive year and Battaglia projects it to close as the 6-5 choice.

In addition to Independence Hall and Storm the Court, other promising juveniles expected to attract attention at the betting windows include Dennis’ Moment (15-1), the Breeders’ Cup Juvenile favorite who finished sixth after going to his knees at the start; impressive Breeders’ Futurity (GI) winner Maxfield (15-1); runaway Champagne (GI) winner Tiz the Law (20-1), who’ll headline Saturday’s $300,000 Kentucky Jockey Club (GII) at Churchill Downs; and Honor A.P. (20-1), a swift maiden winner who is expected to make his next start in the $200,000 Los Alamitos Futurity (GII) on Dec. 7.

FREE BRISNET PAST PERFORMANCES FOR THURSDAY’S FALLS CITY, CARDINAL – Thursday’s Thanksgiving Day featured races will be the $300,000 Falls City (Grade III) and $175,000 Cardinal (GIII) and Brisnet.com will help the holiday handicapping with free past performances.

In the Falls City, Jay Em Ess Stables’ Go Google Yourself is the co-morning line favorite with Sally’s Curlin as both fillies will be in search of their second-consecutive stakes victories.

Go Google Yourself, who drew the outside post position No. 9, won the $200,000 Locust Grove (GIII) in late September for trainer Paul McGee.

“The outside post should be fine,” McGee said. “She has enough tactical speed that she’ll be able to use that to get position into the first turn.”

Trained by Kevin Attard, Starship Jubilee is a top contender for Canadian Horse of the Year honors following a stellar 2019 campaign that included a one-length score in the $600,000 E.P. Taylor (GI) at Woodbine. Luis Contreras will have the mount from post 11.

The opening leg from Fair Grounds is a first-level allowance for 3-year-olds and up at 1 1/16 miles on turf (an oversubscribed field of 14), while the third leg is the $75,000 Richard R. Scherer Memorial for fillies and mares at 5 ½ furlongs on the grass (an oversubscribed field of 12). The second and fourth legs from Churchill Downs are the Golden Rod and Kentucky Jockey Club.

DOWN THE STRETCH – There was a $186,622 carryover in the 20-cent Single 6 Jackpot on Wednesday. First post is 1 p.m. The Single 6 sequence will span Races 5-10. … Thursday-Sunday at Churchill Downs will have 12 races. First post will be 1 p.m. with the exception of Thanksgiving where the first race is 11:30 a.m. Closing day of the 26-day meet is Sunday – the first time since 1928 Churchill Downs will race in December. 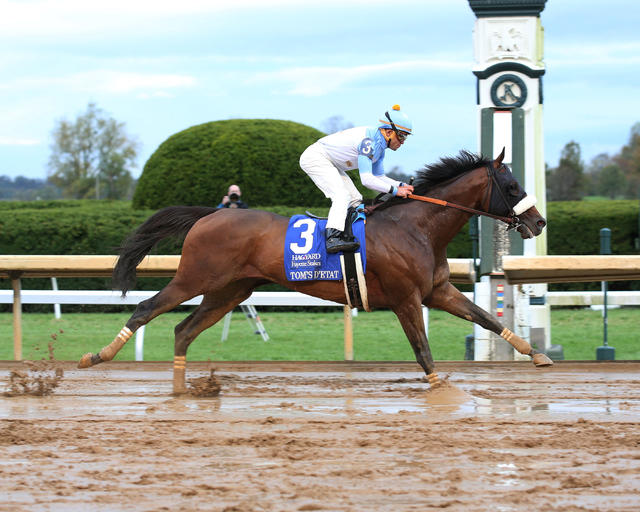