The recently-concluded Fall Meet at Churchill Downs distributed record prize money for horsemen and delivered a great deal of substance for horseplayers as numerous memorable moments were produced during the historic Louisville racetrack’s action-packed, four-week stand.

The popular 21-day Fall Meet, which ran from Oct. 28 through Nov. 25, was spearheaded by a record-equaling ninth visit by the Breeders’ Cup World Championships on Nov. 2-3 that brought together the best horses, jockeys, trainers, owners and breeders from around the world.

The significant growth in purses was attributed to early returns from state-of-the-art historical racing machines at Derby City Gaming, Churchill Downs Incorporated’s new $65 million facility that opened in mid-September at nearby 4520 Poplar Level Road. For example, maiden special weight races were worth a record $76,000 and allowance races ranged from $78,500 to $90,000.

“This was an incredibly strong Fall Meet,” said Churchill Downs Racetrack President Kevin Flanery. “The hailed return of the Breeders’ Cup World Championships to Louisville on opening week after a seven-year hiatus helped set the tone for an outstanding season. Day in and day out, our horsemen, their owners and a robust jockey colony delivered an attractive and competitive racing product that appealed to bettors around the world. We express sincere gratitude to them for their continued support of our thriving racing program, and thank the horseplayers, guests and the greater Louisville community for backing our entertainment experience.”

During the 19 days, Churchill Downs staged 201 races, which lured 1,789 starters for a strong average of 8.9 horses per race – the same as the 2017 Fall Meet. The season’s racing product featured fields of seven or more in 89.6% of the races. There were only 21 races with six or less starters.

It was an extremely chilly Fall Meet as Louisville’s average temperature during the month of November hovered just above 43 degrees. As a result, only 23 of the 50 planned turf races went on as scheduled, and the going was less than “firm” for each race of the grass races (seven races listed as “good,” 11 listed as “yielding” and five listed as “soft”). A total of 47 scheduled turf races have been lost over 23 of the last 42 Fall Meet racing days just two years after none were transferred to the main track during the 2016 Fall Meet. This year’s surface transfers caused 99 “off the turf” scratches. Meanwhile, the main track had races listed as “muddy” or “sloppy” on five of the 21 days this year, including Breeders’ Cup Friday and “Stars of Tomorrow II.”

The 129th Fall Meet was anchored by the 35th Breeders’ Cup World Championships, which showcased 14 races and 13 Grade Is with purses and awards totaling a record $30 million. Much like its previous eight visits to Louisville, the prestigious two-day event delivered numerous dramatic and memorable moments.

Southern California-based 5-year-old Accelerate (22-10-5-5—$5,792,480), owned by Hronis Racing LLC, made a case for Horse of the Year honors with a one-length win over Gunnevera in the $6 million Breeders’ Cup Classic (Grade I) for his fifth Grade I win of the year. The victory gave trainer John Sadler his first Breeders’ Cup triumph after going winless with his previous 43 starters. Joel Rosario rode the winner, and his mounts amassed an event-high $5,768,840 over the two Breeders’ Cup days after winning with four of his 13 mounts, including a trio of Breeders’ Cup conquests.

The two-day Breeders’ Cup attendance was 112,672 – the third highest in event history – and total betting reached more than $157.4 million, which was the fifth highest total since Breeders’ Cup adopted a two-day format in 2007.

In addition to the Breeders’ Cup, highpoints during the Fall Meet included Steve Landers’ 5-year-old Leofric, who turned back a determined challenge by 3-year-old Bravazo in deep stretch to win a thrilling renewal of the $500,000 Clark Handicap Presented by Norton Healthcare (GI) – the traditional “Black Friday” headliner on Nov. 23 and the most lucrative non-Breeders’ Cup race on the 30-race, $30.9 million stakes schedule.

Leofric capped a Fall Meet stakes treble for Cox, the 38-year-old Louisville native who also landed his 1,000-career win on Nov. 18 (although it occurred at Fair Grounds). In addition to stakes wins by Monomoy Girl and Leofric, the Cox-trained Mr. Misunderstood remained perfect in four stakes appearances over the Churchill Downs turf course when the 4-year-old gelding owned by Staton Flurry surged to the lead in late stretch to land the $100,000 River City Handicap (GIII) on Nov. 17.

Churchill Downs’ strong racing program for 2-year-olds was emphasized by impressive stakes performances on its two 14th annual “Stars of Tomorrow” programs, which are entirely devoted to 2-year-olds. Signalman, who finished third in the Breeders’ Cup Juvenile (GI) 22 days earlier, earned 10 points on the 35-race “Road to the Kentucky Derby Presented by Woodford Reserve” series when he turned back a late charge from Plus Que Parfait to win the $200,000 Kentucky Jockey Club (GII) by a neck on Nov. 24. Earlier that day, Liora – the longest shot in the field of eight 2-year-old fillies at odds of 27-1 – led every step of the way and narrowly repelled a late bid by odds-on 3-5 favorite and Breeders’ Cup Juvenile Fillies (GI) runner-up Restless Rider to win the $200,000 Golden Rod (GII) for fillies by a scant nose. Also that day, the Larry Jones-trained Super Steed, a son of 2010 Kentucky Derby winner Super Saver, arose as a tantalizing prospect with an impressive first-level allowance win on the “Stars of Tomorrow” undercard.

Golden Rod winner Liora ended the season as the only horse to win multiple times at the Fall Meet.

Another 2-year-old that impressed onlookers during the meet was Improbable, who dominated rivals by 7 ¼ lengths in the $100,000 Street Sense on the Breeders’ Cup Friday undercard. Like Breeders’ Cup Juvenile winner Game Winner, Improbable is trained by Hall of Famer and five-time Kentucky Derby winner Bob Baffert.

Game Winner was the clear 5-1 second choice in Pool 1 of the Kentucky Derby Future Wager behind the pari-mutuel field of “All of 3-Year-Old Colts and Geldings” that closed as the 6-5 favorite. Improbable ended as the 17-1 fifth betting choice and Signalman closed at 30-1 in the field of 24 betting interests. Offered for the 21st consecutive year on Nov. 22-25, betting over the four days totaled $258,389 and was up 3.2% from last year. Also offered concurrently was the Kentucky Derby Sire Future Wager in which “All Other Sires” (9-2) and Tapit (6-1) attracted the most attention in the betting pool that reached $32,924.

A total of 147 horses were purchased through claiming races during the Fall Meet for a total of $2,638,500. For the year, a total of 428 horses were claimed during Churchill Downs’ three racing meets for a total of $8,483,000, which resulted in a $508,980 sales tax revenue for the Commonwealth of Kentucky.

The popular 20-cent Single 6 Jackpot delivered a significant payday for a TwinSpires.com customer on the penultimate day of the meet. The six-race sequence challenged bettors to select the winners of six consecutive races daily but the Jackpot pool, which grew to $317,738 throughout the meet, was only paid if there was a single winning ticket. That occurred Nov. 24 when the sequence went down for a whopping $500,256.88. The lucrative payoff occurred one day after a bettor was deprived of the jackpot when a rare double-disqualification transpired in the Nov. 23 finale, and one day before a worthwhile mandatory payout would have been paid to the most winners of six races.

In addition to the stellar racing, two additional events proved to be extremely popular with on-track guests: a special Halloween Family Adventure Day Presented by Kroger on opening day that featured fun activities for children and a giveaway of more than a ton of candy, and Thanksgiving Day, a Louisville tradition at Churchill Downs since 1969 where more than 8,000 turkey dinners were served with all the trimmings, making it the largest number anywhere in the region.

Churchill Downs will conduct three racing meets in 2019 over 75 race dates. The 38-day Spring Meet will be staged from April 27-June 29 with the 145th running of the Kentucky Derby Presented by Woodford Reserve (GI) staged on Saturday, May 4. The 11-day September Meet is scheduled for Sept. 13-29, and the Fall Meet will run over 26 days from Oct. 27-Dec. 1.

When guests return for the 2019 Spring Meet, three capital improvement projects will be complete. Churchill Downs has invested $4.4 million to improve the infield guest entry experience for the 2019 Kentucky Derby and beyond through the construction of a new Infield Gate at the corner of 4th Street and Central Avenue. In addition, Churchill Downs will complete the colonnade wall from the Paddock Gate to the Clubhouse Gate in a $3.9 million project. Those projects are occurring concurrently with a $5 million capital investment that will expand the Starting Gate Suites through the construction of a new 20,000-square-foot rooftop garden which will deliver a unique hospitality experience with exclusive sightlines and access for more than 500 ticketed guests. 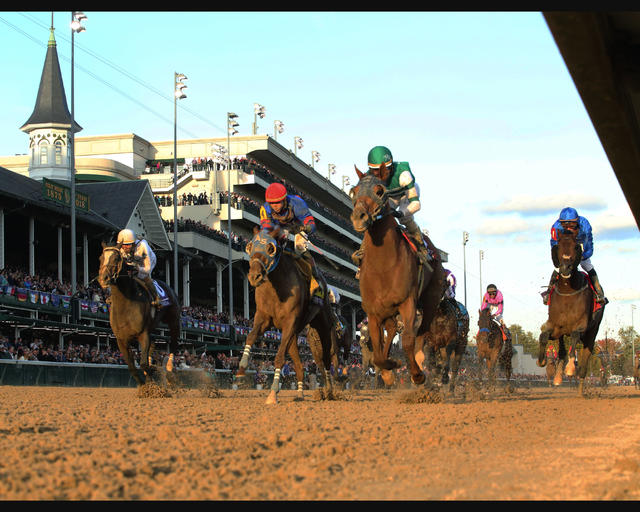