Horse racing on the thriving Kentucky circuit shifts to Churchill Downs on Friday (Sept. 13) with a 10-race program at 12:45 p.m. (all times Eastern) as the famed Louisville racetrack opens its seventh September Meet for an action-packed 11-date run through Sunday, Sept. 29.

The average purse offered this year in Vice President of Racing Ben Huffman’s 109-race September Meet condition book is a whopping $76,275, thanks to robust business from state-of-the-art historical racing machines that debuted one year ago at nearby Derby City Gaming.

This year’s anticipated three-week September Meet, presented by Commonwealth Technology, will feature a record $8.314 million in prize money (all purses include prize money from the Kentucky Thoroughbred Development Fund), which averages to a hefty $756,000 per day. Last year, an unprecedented $5.097 million was paid to horsemen for a daily average of $463,000.

A total of 103 horses and 10 also-eligible entries were drawn Tuesday for Friday’s opener for an average of 10.3 horses per race. The average field size during last year’s September Meet was 8.5 horses.

The most lucrative race of the day is Race 6 at 3:16 p.m. when eight older horses sprint six furlongs in a $105,000 conditioned allowance (optional $150,000 claiming tag). The Sagamore Farm-owned and Stanley Hough-trained entry of He Hate Me and Recruiting Ready figure to take plenty of action from bettors. He Hate Me finished second, three-quarters of a length back of Bon Raison, in the restricted $100,000 Tale of the Cat at Saratoga on Aug. 9. Meanwhile, this year’s Gulfstream Park Sprint (GIII) winner Recruiting Ready hopes to rebound from a disappointing West Coast trip to Del Mar when he finished sixth as the 8-5 favorite in the $300,000 Bing Crosby (GI) on July 27.

A major focus for many horsemen during the second half of the year is the development of 2-year-olds. There are two “baby” races for maiden fillies on Friday – a 1 1/16-mile turf test (Race 5 at 2:45 p.m.) and a one-mile dirt race (Race 7 at 3:48 p.m.). They are the first of at least 18 maiden, allowance or stakes races for juveniles during the September Meet. Combined with the nearby Churchill Downs Trackside Training Center, a total of 373 two-year-olds recorded local workouts in the last week.

The September Meet’s eight-race stakes schedule cumulatively worth $1.375 million kicks off Saturday with a stakes quartet, including two important 1 1/16-mile fixtures for juveniles that could produce starters in next spring’s Kentucky Derby Presented by Woodford Reserve (Grade I) and the Longines Kentucky Oaks (GI). The $200,000 Iroquois (GIII) kicks off the “Road to the Kentucky Derby” series (Top 4 Points: 10-4-2-1), while the $200,000 Pocahontas (GII) starts the “Road to the Kentucky Oaks” (Top 4 Points: 10-4-2-1). Also, both races are Breeders’ Cup “Win and You’re In” Challenge events, which means the winners will receive automatic berths in the starting gate for their respective Breeders’ Cup races on Nov. 1 at Santa Anita with full entry fees and travel expenses paid.

Entries for Saturday’s 11-race card will be taken Wednesday morning.

Dennis’ Moment is a certain favorite for Saturday’s $200,000 Iroquois Stakes (GIII) following his eye-popping 19 ¼-length maiden special weight score at Ellis Park on July 27, and is considered by many onlookers as the uber-early favorite to win next year’s Kentucky Derby.

“Dennis’ Moment is one of the most promising 2-year-olds we’ve ever had in our barn,” said Dale Romans, Churchill Downs’ all-time leading trainer with 729 wins (ahead of Bill Mott’s 715 and Steve Asmussen’s 704). “We’ve had some very nice 2-year-olds and Dennis is right there with them. This horse is only a maiden winner but the athleticism he shows us every morning he trains, and obviously his impressive 19 ¼-length maiden win, leads us to believe the future could be anything.

“The Iroquois is a race that kicks off the path to what our ultimate goal is, winning the Kentucky Derby. I think the timing of the Iroquois works nicely because it gives us time after the race to train toward the Breeders’ Cup Juvenile.”

Expected to headline the 11-race card on Sept. 21 is recent Test Stakes (GI) heroine Covfefe, who will use the $125,000 Dogwood Stakes (Listed) as a likely final prep prior to competing in the $1 million Breeders’ Cup Filly & Mare Sprint (GI).

“(The Dogwood) just fits nicely with the calendar and we can just run from our home base at Churchill,” trainer Brad Cox said. “Obviously the Breeders’ Cup is our goal with her and this race gives us good spacing to have plenty of training before we go to California.”

According to Hall of Fame trainer Richard Mandella, Southern California-based Arkansas Derby (GI) winner Omaha Beach is targeting the $150,000 Ack Ack presented by GE Appliances (GIII) on Sept. 28 as his comeback race following surgery to repair an entrapped epiglottis – the injury that forced him to be scratched as the morning line favorite from this year’s Kentucky Derby.

The $250,000 Lukas Classic presented by Budweiser (Grade III), along with the $150,000 Ack Ack presented by GE Appliances (GIII) for milers and $125,000 Jefferson Cup (Listed) for 3-year-olds at 1 1/8 miles on turf are the featured events on Saturday, Sept. 28 – the lone Downs After Dark Presented by Budweiser night racing event of the September Meet and last one of the year. The event theme that evening will be Bourbon & Beats and guests are encouraged to wear shades of purple and stay on trend with autumn fashion as they celebrate a pairing of Kentucky sounds and spirits.

Opening weekend weather in Louisville will be summerlike, according to the National Weather Service, with a forecast of sunny skies and temperatures in the low-to-mid 90s on Friday, upper 80s on Saturday and low 90s on Sunday.

Family Adventure Day Presented by Kroger is scheduled for Sunday, Sept. 22. Families are encouraged to bring the kids to Churchill Downs for a day of racing and family activities including pony rides, inflatables, a petting zoo, stick horse races on the turf course, face painting and more. The theme is “Be Creative!” and special happenings include interaction with the Kentucky Department of Agriculture’s Mobile Science Activity Center; artwork with mural and conceptual artist Resko; arts and crafts with Side by Side Studio; a mobile recording studio with AMPED: The Academy of Music Production, Education and Development; and a meet-and-greet with Elsa, Superman and Churchill Charlie.

Tickets for adults and children age 3 and up are $10 when purchased online in advance at ChurchillDowns.com ($12 at the gate), and include unlimited access to all kid-friendly activities through 5 p.m. Churchill Downs is also offering a Family Four Pack that includes four Family Adventure Day tickets, four family meals in the Family Adventure Day area and two racing programs for only $48 (a $64 package includes reserved box seats).

Tom Amoss was the September Meet leading trainer a year ago with seven wins from 17 starters, including a runaway win by Joel Politi’s Serengeti Empress in the Pocahontas (GII), who’d use the race as a springboard to becoming this year’s gate-to-wire winner of the $1.25 million Longines Kentucky Oaks (GI) – America’s most lucrative and prestigious race for 3-year-old fillies. Behind Amoss last September was Louisville native Brad Cox (6-for-33), record 21-time Churchill Downs leading trainer Steve Asmussen (5-for-41), Chris Hartman (5-for-17) and Ian Wilkes (5-for-28).

The lone Senior Day of the September Meet at Churchill Downs is scheduled for Friday, Sept. 27. Guests 60 and up can enjoy lunch and a day at the races in Millionaires Row for only $24.

On Sundays, Churchill Downs is offering a special “Stakes and Eggs” brunch special in the Stakes Room. The $48 package for adults and $25 package for children includes a seat in the Stakes Room on the fourth floor of the Clubhouse and all-you-can-eat access to the brunch menu that includes an omelet station, scrambled eggs, biscuits and country gravy, French toast, hot brown, carved country ham, crispy bacon, sausage patties, hash brown potatoes with peppers and onions, fresh fruit, garden vegetables, breakfast breads and a chef’s dessert display.

“Churchill Downs Today,” the track’s daily racing preview program, will air one hour before the first race of the day and can be seen on-track and www.TwinSprires.com. Also, Churchill Downs Today will be streamed live on Twitter via @twinspires and Facebook via www.facebook.com/twinspires.

Past performances and other handicapping information for Churchill Downs’ races available online at Brisnet via http://www.brisnet.com/churchill. 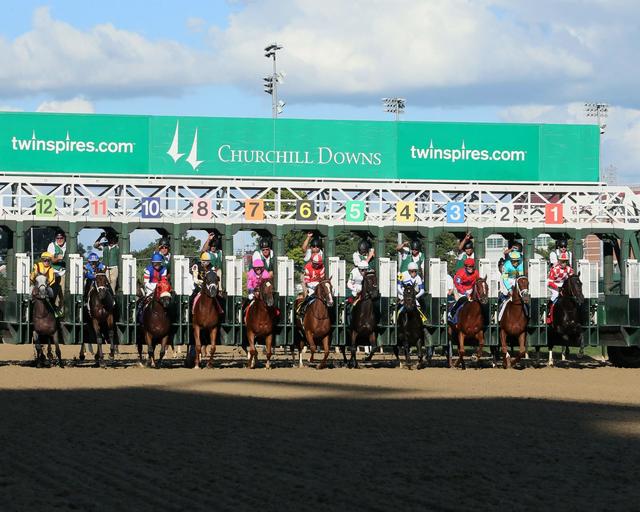