Shadwell Stables’ 5-year-old homebred Alkhaatam, the longest shot in the field of nine older horses, pulled off a 21-1 surprise in Sunday’s $84,322 allowance feature at Churchill Downs when he beat Bourbon Resolution by 1 ¼ lengths.

Flowers for Lisa was hustled to the front and led the way early through fractions of :23.26 and :46.61 with My Sixth Sense in second and Alkhaatam tucked behind in third. Flowers for Lisa gave way midway around the final turn and My Sixth Sense took over but Alkhaatam loomed on his outside. Alkhaatam took command with three-sixteenths of a mile to run and fended off late runs by Bourbon Resolution, Core Beliefs and Lone Sailor for the win.

“He won at 37-1 down at Oaklawn in early April and was the longest shot on the board again today,” Peitz said. “He shows his talent when we can get him in the right spot. We ran him in some tough races last year but his two-turn races, at this type of level, have been very impressive.”

Alkhaatam, a Kentucky-bred son of Tapit, paid $45.20 to win. Bourbon Resolution and Core Beliefs were separated by a neck for the place. Lone Sailor was another 1 ½ lengths behind in fourth. Scars Are Cool, the 5-2 favorite finished fifth.

After dark days on Monday, Tuesday and Wednesday, racing at Churchill Downs will resume Thursday with a nine-race card at 1 p.m. (all times Eastern). The featured eighth race is a competitive first-level allowance for 3-year-old fillies at 1 1/16 miles. The sixth race is a first-level allowance for 3-year-olds at 1 1/16 miles on turf. Also, there is a $3,501 carryover in the $1 Super Hi-5 on the final race of the day.

Racing from Churchill Downs on Thursday will air on FS2 from 1-6:30 p.m. as part of FOX Sports’ “America’s Day at the Races” coverage. It also will be broadcast on FOX Sports Ohio from 3-6 p.m. 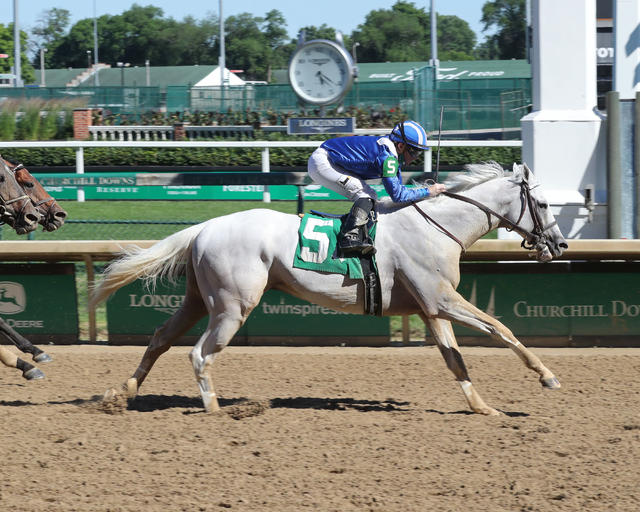