William S. Farish’s homebred 4-year-old filly Royal Flag won her third consecutive start when she ran down Sara Sea and held off a late run by Saracosa to win Sunday’s $83,656 feature at Churchill Downs by a half-length.

Four Roses came away with the lead and led the field of 10 fillies and mares through splits of :23.75, :47.39 and 1:11.79 with Royal Flag positioned in fourth. Sara Sea poked her head in front leaving the turn but Royal Flag ranged up from her outside and swept to the front at the top of the lane. Saracosa made a challenge as Royal Flag wandered while clear in deep stretch and held her at bay in the late stages for the victory.

“She sat in a perfect spot,” Castellano said. “I just let the two horses in front of her give her a target. Around the turn we were able to get her outside of the early pacesetters and she fought hard to the finish. She’s starting to figure things out and really improving.”

After dark days on Monday, Tuesday and Wednesday, racing at Churchill Downs will resume Thursday with a nine-race card at 1 p.m. (all times Eastern). The featured eighth race features the comeback of last year’s Acorn (GI) and Coaching Club American Oaks (GI) winner Guarana, who is the odds-on 3-5 morning line favorite in a field of nine fillies and mares set to sprint seven furlongs in a $85,000 allowance/optional claiming event.

Thursday’s card will include a $162,029 carryover in the 20-cent Single 6 Jackpot on a Races 4-9. Racing from Churchill Downs on Thursday will air on FS2 from 1-6 p.m. as part of FOX Sports’ “America’s Day at the Races” coverage. It also will be broadcast on FOX Sports Ohio from 3-6 p.m. 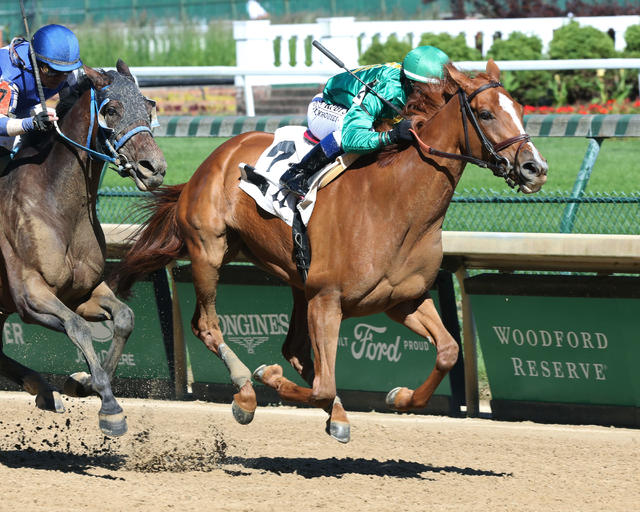