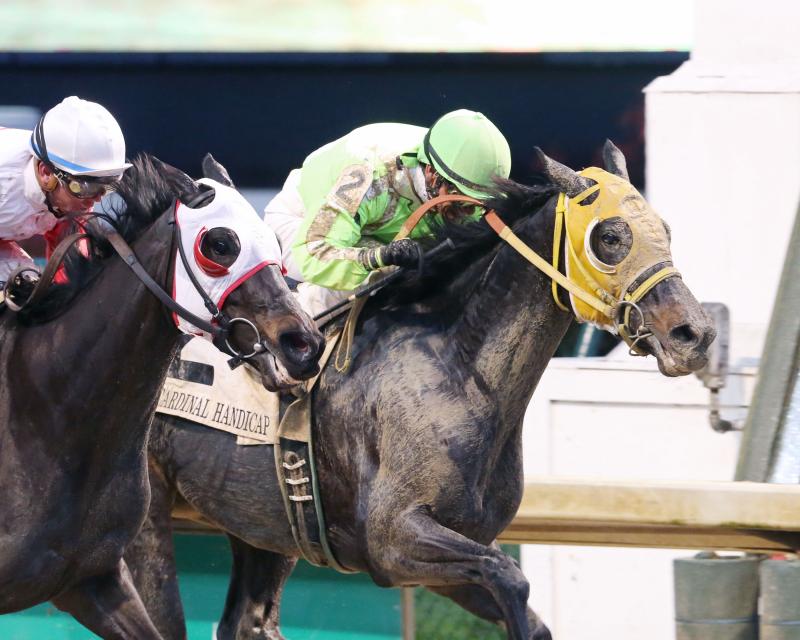 Jon A. Marshall’s Tricky Escape and jockey Chris DeCarlo (right) held off Fair Point and then withstood a claim of foul to win the $100,000 Cardinal Handicap at Churchill Downs> (Coady Photography, Churchill Downs) 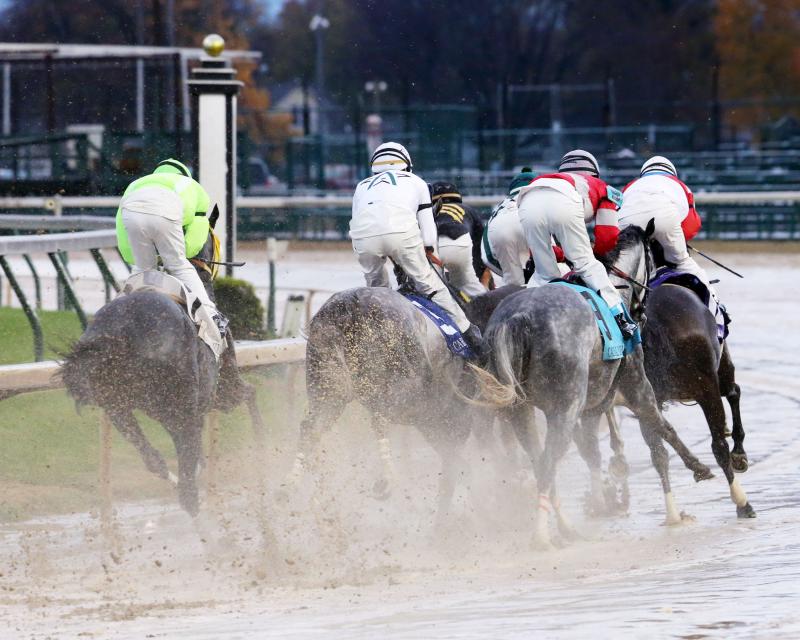 The field for the Cardinal Handicap, which was moved from the turf course to the main track following an afternoon rainstorm, splashed into the first turn at Churchill Downs. (Coady Photography, Churchill Downs) 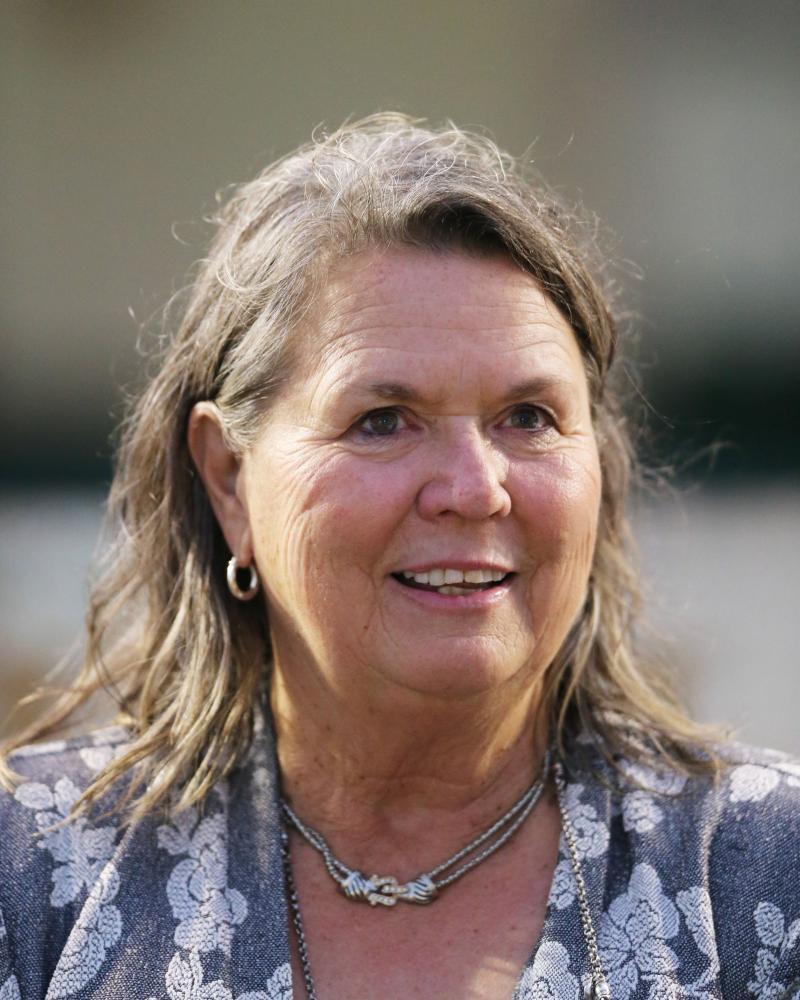 Jon A. Marshall’s Tricky Escape bided her time for an opening on the inside around the far turn and prevailed in a three-horse drive to the wire in Saturday’s 44th running of the $100,000 Cardinal Handicap at Churchill Downs, which was taken off the turf and run on the “sloppy” main track. Fair Point was a nose back in second and longshot Coco Channel was another length back in third.

Tricky Escape, who raided Kentucky from the Middletown Training Center in Delaware, clocked 1 1/8 miles in 1:53.85. Chris DeCarlo rode the winner for trainer Lynn Ashby, who is famously known in equine circles as an eight-time champion trainer of Arabians. Tricky Escape is her lone stakes-winning Thoroughbred, according to Equibase.com.

“She’s as game as they come and does everything you ask,” Ashby said.

The race was moved to the main track at 4:20 p.m. (all times Eastern) – about an hour before the race – when a line of storms moved through Louisville. As is protocol in situations involving a transfer of racing surfaces, the Grade III ranking for the Cardinal must be reviewed and approved by the American Graded Stakes Committee in the coming days before it can be applied.

Reduced to a field seven fillies and mares after five scratches, 30-1 longshot Coco Channel set the early pace of :25.23, :50.60 and 1:15.10 with 45-1 B Rockett chasing in second and Fair Point stalking in third from the outside. Tricky Escape, who broke from the inside post, chased the pacesetters from fourth. Linda, the 9-5 favorite, swung six-wide around the far to make a bid and join the leaders, as DeCarlo waited for a seam to open for Tricky Escape at the top of the stretch.

As Linda weakened in the stretch, Tricky Escape rallied from the inside to draw even with the leaders at the eighth pole. Coco Channel raced between horses and Fair Point was in the three-path on the outside. Tricky Escape lived up to her name as she narrowly took over inside the final sixteenth of a mile as the trio competed in close quarters.

Julie Burke, who rode Coco Channel, lodged an objection against the winner and runner-up after the race, but Kentucky Horse Racing Commission stewards disallowed the claim following a review of video tape.

“When I went inside I think the other riders were probably cussing me at one point,” New York-based DeCarlo said. “This filly tries so hard. Lynn does a great job with her. We broke well and got into a good spot. She just kept tugging along and dug in in the final stages.”

Tricky Escape is a daughter of Hat Trick (JPN) out of the Petionville mare Island Escape. She was bred in Kentucky by Robert B. Trussell Jr. and John T.L. Jones III.

CHRIS DeCARLO, jockey of TRICKY ESCAPE (winner): “I originally was going to get her out turning for home. When I went inside I think the other riders were probably cussing me at one point. This filly tries so hard. Lynn does a great job with her. We broke well and got into a good spot. She just kept tugging along and dug in in the final stages.”

LYNN ASHBY, trainer of TRICKY ESCAPE (winner): “I was a little concerned when it came off the grass but I knew how much she likes an off track. I was worried when we couldn’t switch her hind shoes so I just told Chris to take care of her in the turns. She’s as game as they come and does everything you ask.”

TYLER GAFFALIONE, jockey on FAIR POINT (runner-up): “I had a perfect trip. The filly relaxed on the outside and just sat there and waited for me to ask her for run. When I did, she really fought hard. When she made the lead she started to wait a little bit on that horse (Tricky Escape) and when that horse started to come back to her she started to right again, but it was too late. After the wire she was already getting back by her, but they don’t pay us after the wire.”

Q: Were you expecting her to run pretty well when the race came off the grass? “I had no worries. She had run well on the dirt before. She had had one or two races on the slop and she had always performed well, and she’d never run off-the-board on the dirt. So we had confidence coming in, and Mr. McGaughey (trainer Shug McGaughey) does a great job. Any time he brings one over, you know you’ve got a horse.”

CHARLIE LoPRESTI, trainer of COCO CHANNEL (third): “I thought she ran really good. We were on the fence about running her if it came off (the turf). But I told Julie and I talked to the guys at Calumet and told them it was a short field and she’s doing good, so let’s run her. If she likes it, fine. If not don’t beat her up, just ease up on her and let her gallop around there. She broke on top and ran really, really good.”

JULIE BURKE, jockey on COCO CHANNEL (third): “She ran a really game race. She’s tough and never runs a bad race. She loved the slop. She’s never ran on the dirt before, but she loved the slop here today and she’s game, she’s tough.” 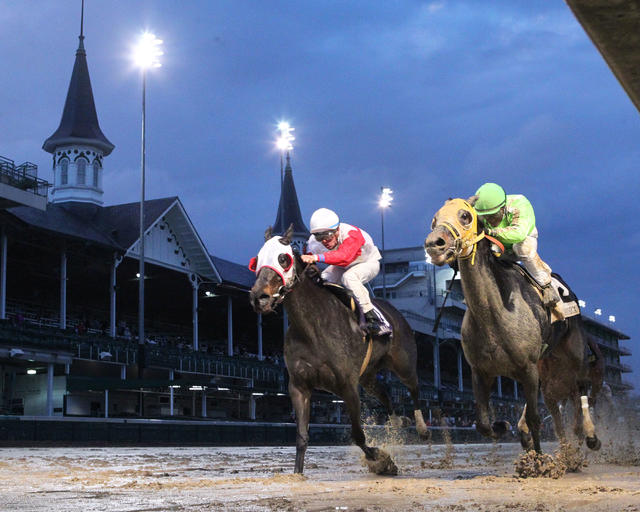