With a furlong to run Saturday night’s 31st running of the $125,000 Aristides Presented by GE Appliances (Listed) at Churchill Downs, it looked as if six of the seven older horses could win, but it was Chris Wilkins’ 7-year-old gelding Wilbo who emerged as the victor in the final stages to beat Petrov by a neck in front of 17,151 fans on “Downs After Dark Presented by Budweiser.” Zipp On By finished another head back in third.

Trained by Chris Hartman, Wilbo clocked six furlongs over a fast track in 1:09.27 and was ridden by leading rider Corey Lanerie.

Sent off as the 9-2 second betting choice, Wilbo broke well from post No. 6 and raced in the clear in fourth as 26-1 longshot Zipp On By and odds-on favorite Share the Upside went head-and-head for the first quarter mile in :21.66. Petrov and Wilbo joined the leaders leaving the far turn and they were four in a line as they passed the half-mile marker in :44.75 with Mr. Crow and Control Stake ranging into contention just off their heels. For the most part, the group matched strides down the stretch but it was a determined Wilbo who prevailed in the final stages from the four path on the outside.

“He really showed his best stuff tonight,” Lanerie said. “Sitting around the turn I looked back and could see (jockey Jack) Gilligan (on Petrov) had a ton of horse so I couldn’t let him move first. I sat and sat until I couldn’t sit anymore. I had a ton of horse underneath me and he didn’t want to let the other horses by.”

For the veteran Wilbo, it was his 11th victory in 34 starts and the $75,950 first prize padded his earnings to $745,980. He is a son of Candy Ride (ARG) out of the Coronado’s Quest mare Kokadrie and was bred in Kentucky by Woodford Thoroughbreds.

This was Wilbo’s third career stakes win. Previously, he won the $50,000 Don Bernhardt Stakes at Ellis Park in 2017 and last year’s $125,000 King Cotton at Oaklawn Park. In his prep for the Aristides, Wilbo won a six-furlong allowance/optional claiming event at Churchill Downs three weeks ago.

“It was nice to finally win this race,” said Hartman, who won the 2015-16 Aristides with Alsvid. “He’s 7-years-old now but tonight he ran like he was in the prime of his career. Every time he runs he brings his best stuff.”

One race earlier, DARRS Inc.’s 6-year-old gelding Extravagant Kid stalked pacesetter Jazzy Times and collared that rival in deep stretch to win the fourth running of the $92,350 Mighty Beau Overnight Stakes Presented by Budweiser by three-quarters of a length. Texas Wedge was another 1 ¾ lengths back in third. Trained by Brendan Walsh, Extravagant Kid ran five furlongs over firm turf in :56.79 under Tyler Gaffalione to collect his 10th win from 34 starts. The Florida-bred son of Kiss the Kid paid $8 to win as the second betting choice in the field of eight 3-year-olds and up, and banked $45,706 to push his career earnings to $542,073. Bobby’s Wicked One, the 8-5 favorite who was making his turf debut after running second in the Churchill Downs (GI) on Kentucky Derby Day, finished last.

Racing at Churchill Downs continues Sunday with a 10-race program that begins at 12:45 p.m. (all times Eastern).

Corey Lanerie, jockey of WILBO (winner): “He really showed his best stuff tonight. Sitting around the turn I looked back and could see (Jack) Gilligan (on Petrov) had a ton of horse so I couldn’t let him move first. I sat and sat until I couldn’t sit anymore. I had a ton of horse underneath me and he didn’t want to let the other horses by.”

Chris Hartman, trainer of WILBO (winner): “It was nice to finally win this race. He’s 7-years-old now but tonight he ran like he was in the prime of his career. Every time he runs he brings his best stuff.”

Jack Gilligan, jockey of PETROV (runner-up): “He ran so hard and tried the entire stretch. I thought we were going to hold on to win but Corey (Lanerie on Wilbo) got us on the outside.”

Edgar Morales, jockey of ZIPP ON BY (third): “I’m so proud of my horse’s effort tonight. He really ran a big race and almost ended up getting there for the win.”

Tyler Gaffalione, jockey of EXTRAVAGANT KID (winner): “This horse is very classy. I had all the confidence riding him tonight with the great job Brendan (Walsh) and his team do. We were in a great spot all the way around there and had a ton of horse in the stretch.”

Brendan Walsh, trainer of EXTRAVAGANT KID (winner): “He’s been based and Keeneland and always tries hard when we run him. He’s the perfect type of horse to have in the barn and we’re thrilled he got the job done tonight.”

Gabriel Saez, jockey of JAZZY TIMES (runner-up): “We were so close to stealing it on the front. He was so quick out of the gate and got the lead pretty easy. I’m very proud of his effort.”

Wes Hawley, owner/trainer of JAZZY TIMES (runner-up): “I’m very proud of his effort tonight. He ran a great race and we almost had them.”

Miguel Mena, jockey of BOBBY’S WICKED ONE (eighth as 8-5 favorite): “He went okay on the turf the other morning when we breezed him but really didn’t show that same liking to the turf tonight.” 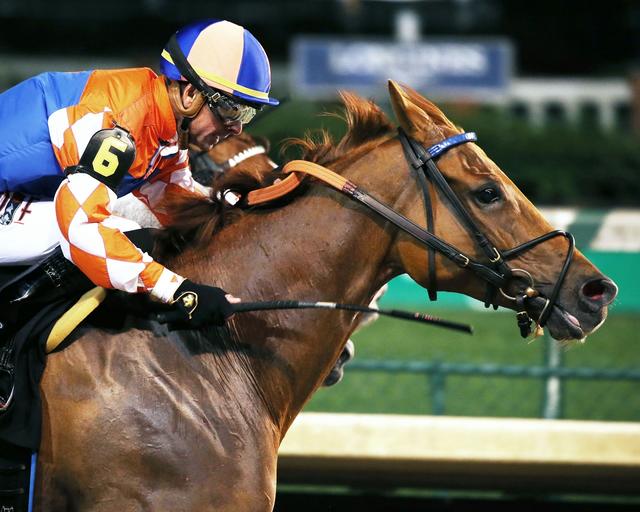