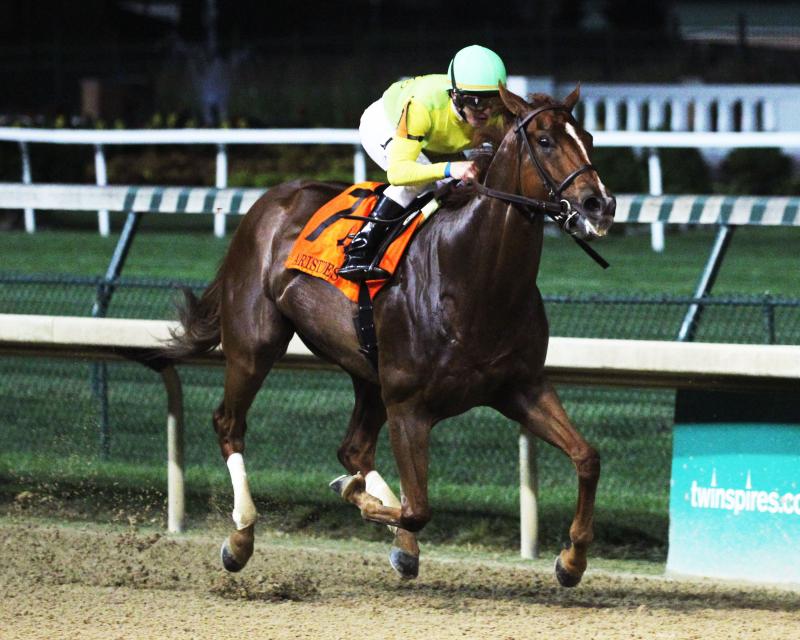 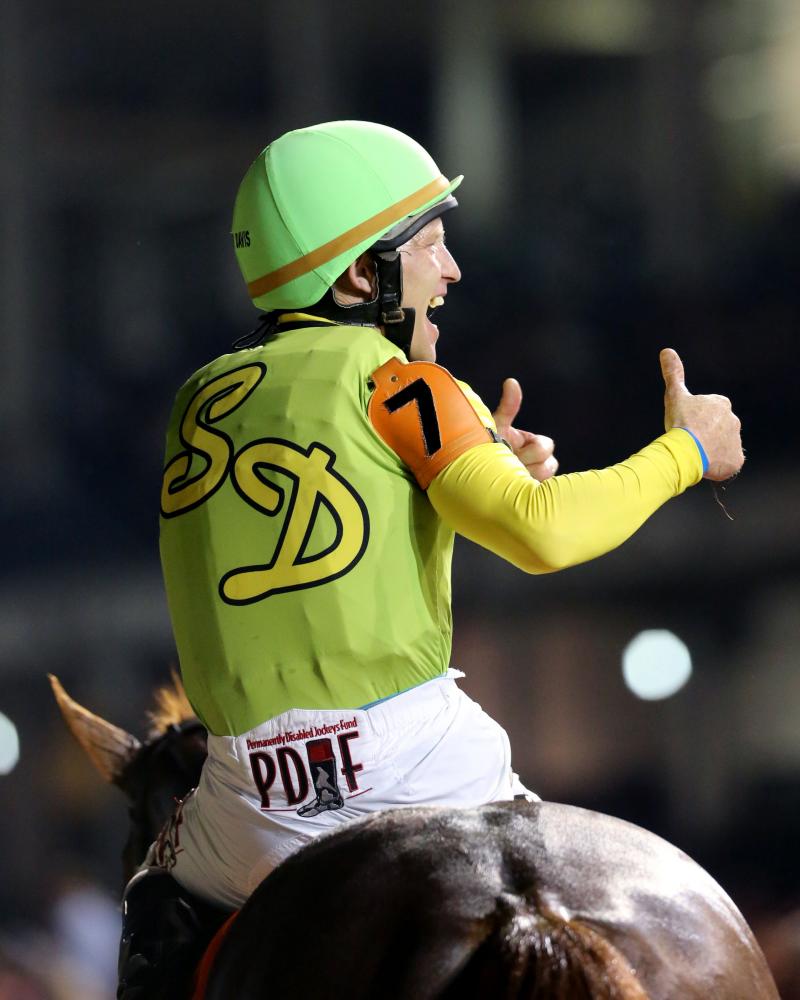 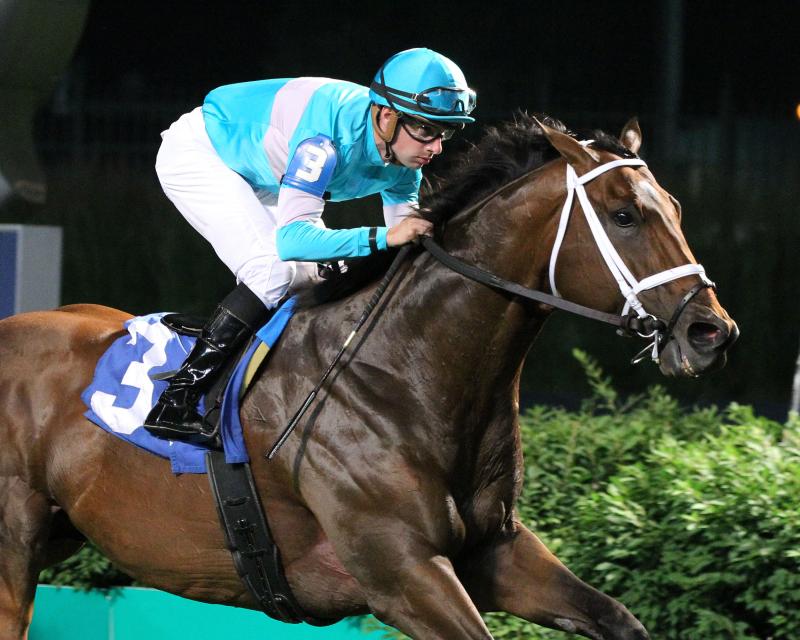 Roy Gene Evans’ 5-year-old homebred gelding Chief Cicatriz swept past pacesetter Smart Spree with a quarter mile to run and drew clear in the stretch to easily win Saturday night’s 30th running of the $100,000 Aristides (Grade III) by 6 ¼ lengths over Mr. Crow in front of 17,068 fans at Churchill Downs on “Downs After Dark Presented by Budweiser.”

Sent off as the 2-1 favorite in the field of seven older horses, Chief Cicatriz broke well from post No. 7 and raced in the clear in third as front-runner Smart Spree rattled off a first quarter mile in :21.30. Chief Cicatriz ranged into the lead three wide on the turn, passed the half-mile marker in :44.02 and strolled home without opposition for the comfortable win.

“We were perfectly drawn on the outside,” Graham said. “We let the speed go in front of him and he settled and got in a nice rhythm. When we turned for home he just poured in on. He was very impressive tonight.”

For Chief Cicatriz, it was his eighth victory in 11 starts and his earnings now stand at $286,881. He is a son of Munnings out of the Speightstown mare Supper Buggy and was bred in Kentucky by his owner.

This was his fifth stakes win overall but first against graded stakes company. Chief Cicatriz won the 2016 KLAQ Handicap at Sunland Park as a 3-year-old, won Phoenix Gold Cup Handicap at age 4 and swept the Hank Mills Sr. Stakes and Phoenix Gold Cup Handicap at Turf Paradise earlier this year. Prior to the Aristides, Chief Cicatriz finished fifth in the $500,000 Churchill Downs Stakes Presented by TwinSpires.com (GII) on the May 5 Kentucky Derby undercard.

“This horse got into trouble when he ran on Derby Day,” said 77-year-old Davis, a member of the Pro Rodeo Hall of Fame and world champ in 1965, ’67-68. “He had some excuses in some of his other races, too. Tonight we knew we would see what he’s all about. He was coming into the race in great shape and we saw the real Chief Cicatriz.”

Awesome Saturday was fourth and was followed by Shadow Tracer, Heartwood and Smart Spree.

One race later, Madaket Stables LLC, Ten Strike Racing and Steve Laymon’s 7-year-old Long On Value rallied from last to first to win the third running of the $69,711 Mighty Beau Overnight Stakes by 1 ¾ lengths over Kid Perfect. Fort Fortitude was a nose back in third and Hogy was another length back in fourth. Making his first start for trainer Brad Cox, Long On Value ran five furlongs over firm turf in :57.31 under Florent Geroux to collect his eighth win from 31 starts. The Virginia-bred son of Value Plus paid $5.40 to win as the 8-5 favorite in the field of six 3-year-olds and up, and banked $40,380 to push his career earnings past the million dollar mark to $1,022,073.

JAMES GRAHAM, jockey of CHIEF CICATRIZ (winner): “We were perfectly drawn on the outside. We let the speed go in front of him and he settled and got in a nice rhythm. When we turned for home he just poured in on. He was very impressive tonight.”

SHAWN DAVIS, trainer of CHIEF CICATRIZ (winner): “This horse got into trouble when he ran on Derby Day. He had some excuses in some of his other races too. Tonight we knew we would see what he’s all about. He was coming into the race in great shape and we saw the real Chief Cicatriz.”

BEN COLEBROOK, trainer of MR. CROW (runner-up): “We got outrun. He ran his race and hat’s off to the winner. He went out there and burned it up and kept going.”

COREY LANERIE, jockey on MR. CROW (runner-up): “He was setting good back there. They were rolling up front and I was liking my chances coming to the quarter pole, but he (Chief Cicatriz) just didn’t stop. I was just second-best tonight. The winner ran great.”

CHRIS HARTMAN, trainer of WILBO (third): “He had a good, clean trip. Looks like he just got outrun.”

FLORENT GEROUX, jockey of LONG ON VALUE (winner): “He broke a little slow but once he got settled, he got into a great rhythm. He closed really fast. I think this horse could have a really solid campaign the rest of the year.”

BRAD COX, trainer of LONG ON VALUE (winner): “This horse was doing really good coming into the race. He showed today he’s a legitimate graded stakes-type horse. Florent had a perfect trip and he closed really strong down the lane. We’ll look at the Breeders’ Cup Turf Sprint (GI) as the ultimate goal for him in the fall.”

JUAN MONTANO, assistant trainer of KID PERFECT (runner-up): “We need to get this horse a little bit better in the gate. He broke a step slow and in these turf sprints that can ultimately cost you. He ran well but that slow break probably cost him tonight. We’re proud of his effort.” 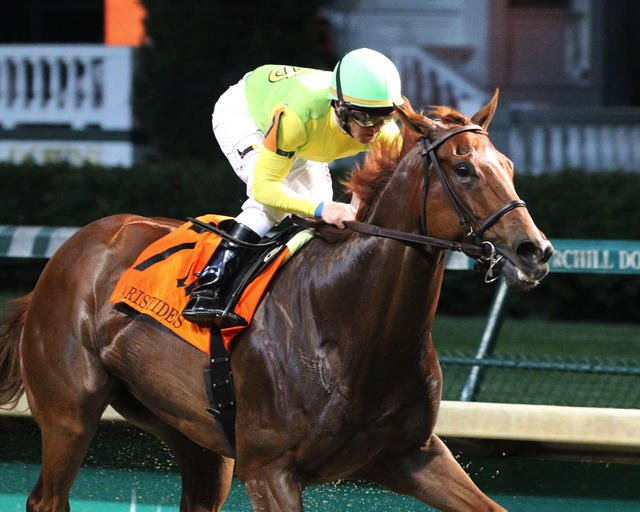